I'm really new to photoshop, so please excuse any ignorance. I have watched numerous tutorials to try and figure this out.

I have a blueprint for a patio I am designing. I put the pavers on it and am now trying to select the shape of the patio so that the overlap of the square pavers are not seen.

I have tried using the lasso tool to do this. When I select the area, and try to copy to a new layer, nothing shows up. I tried combining the layers in a group too.

Does anyone know what I should do? 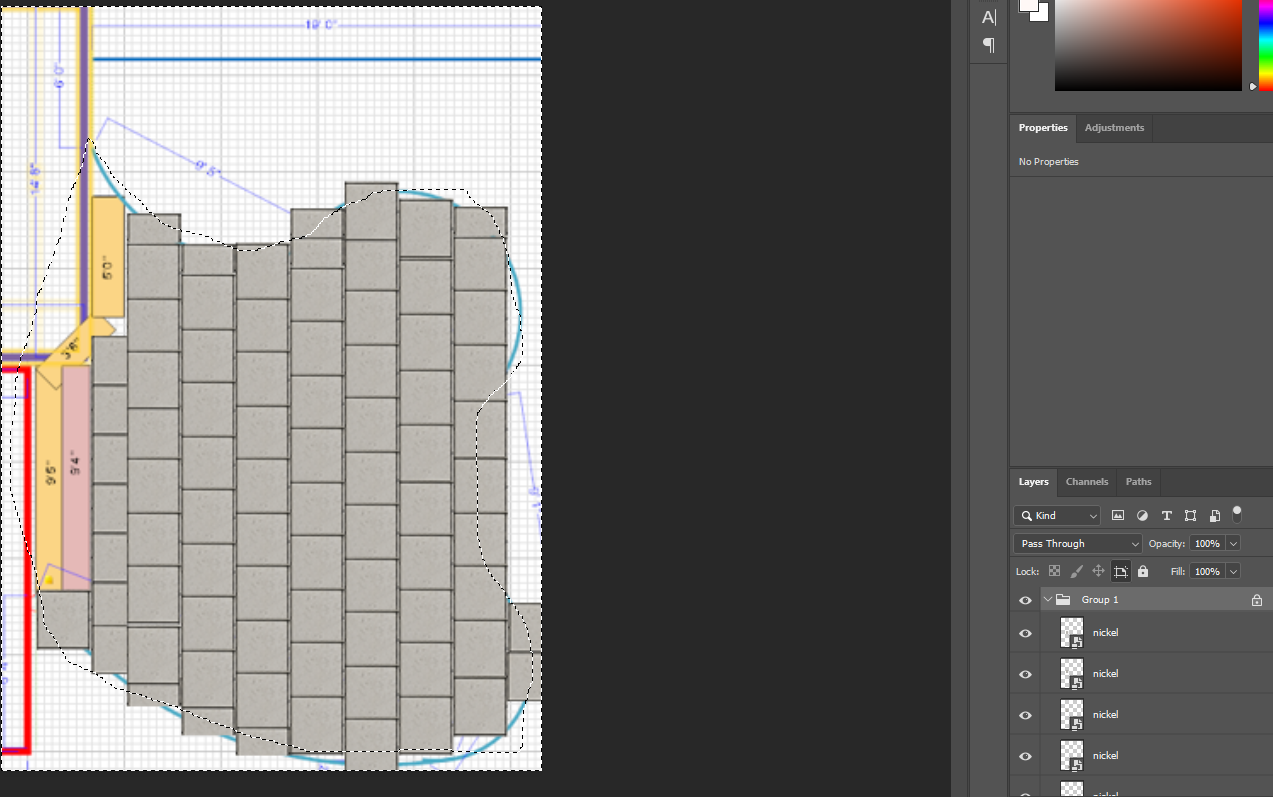 I noticed in your layers panel that you have many layers... It is very likely you are just copying content from another layer.

When selecting/copying in Photoshop, it usually selects from the active layer.

You have to run Shift+Ctrl+C (or Edit → Copy Merged) to copy from all visible layers as though they were merged together.

Note, your layers do not have to be grouped - or selected, as copy merged will copy the content as though it has merged all visible layers.

I guess you want to keep the paving stones as separate objects, only cut the extras off at the edges.

Create a layer group which contains the stones (obviously it's done). Let that group have a layer mask. Draw with the Pen a closed curve (=work path), edit it to fit, make a selection from the work path and insert a layer mask to the group. The current selection is used automatically.

I have given a red stroke to my work path to the bottom layer to make it better visible for you. The red colored path stroke hasn't any function in masking.

You can also insert the path as Vector Mask. Then the edge stays editable. Learn the details from Photohop User's Guide.

Keeping the stones in a group makes reordering and partial recoloring possible. It's easy to close the group when you trace the wanted edge curve from a scanned sketch.

BTW jobs like this would be a little easier in vector drawing programs.

If you just want to copy the selection, then do this: Click the layer, make the selection and press Ctrl + J (windows) or Cmd + J (Mac). The selection will be available now in a new layer above the selected one.

0
How to duplicate a group to a new document having this document the exact same size as the group?
1
Font size while designing a web template in photoshop at size 1280px by 1000px
0
How to add images to existing PDF file in Photoshop?
0
How to make a merged layer cut into a background to be transparent
0
Photoshop hue mode for brush
0
Photoshop: How can I delete a part of a charcacter converted into work path
0
Apply marquee selection to multiple layers
2
How do I create a fuzzy fade-out-to-transparent blur effect on the background of an image in PhotoShop