Avoid overflowing of stroke over a second object

The image below is the result of the intersection between a path and some bezier lines. As you can see, the lines go beyond the path behind them.

How can this be avoided?

I am aiming for the lines to be within the path, i.e. with no overflow. 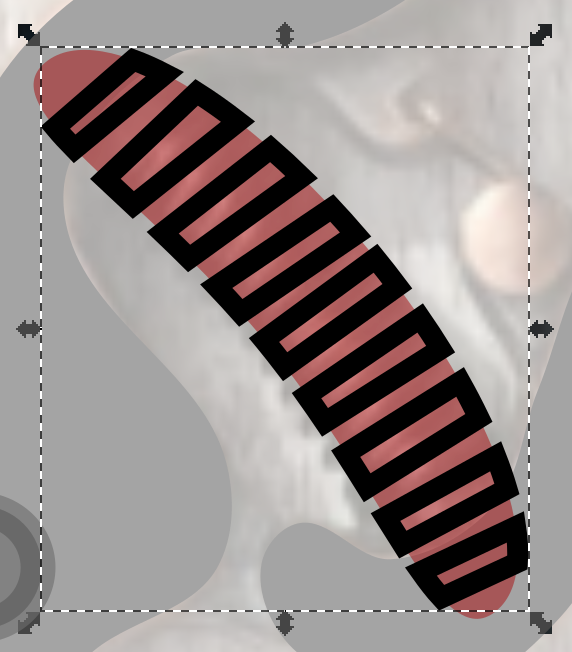 An easy way would be to give a stroke to the background limit shape, too, but I guess it's not the wanted answer.

Inkscape's strokes are half of the stroke width outside the actual shape borded. The border of the strokeless shape is exactly the midline of the stroke. That cannot be changed like Illustrator users can do.

In the left the pink shape is the allowed area, the black shape has no fill, only a stroke

In the middle the black stroke is converted to path (=Path > Stroke to Path) and the pink shape is duplicated. The duplicate in on top and for clarity I removed its fill, but inserted a green stroke

In the right The black and green shapes are selected and Path > Intersection is applied.

Multiple black shapes could be combined to one with Union or Combine.

For uniformly wide stroke or actually something which resembles stroke delete or Clip to invisible the outer half of the stroke. Here's the deletion. For it the stroke must be converted to path:

In the left there's 2 black stroke only shapes and the underlying limit shape, the one whose duplicate was used to slice the black shapes to the right size by intersecting.

In the middle the black shapes are duplicated, the duplicates are on top and have green fill, no stroke.

Warning: Clipped shapes are selectable under the clipping path by double-clicking. It's dangerous, you can very easily destroy the composition by moving the clipped shapes. it's useful to learn to lock and select items via the objects panel.

Not the answer you're looking for? Browse other questions tagged inkscape path stroke bezier-curve or ask your own question.

2
Join mid points of two adjacent paths in Inkscape
1
How can I make this path bend in FontLab
2
Inkscape: connect cloned Bezier curves
8
What is the difference between a path and a stroke?
0
How to snap end points of straight lines to form connected triangles?
0
How can I get rid of bezier handles when moving an object?
0
Inkscape: Stroke to path on clipped object
1
Creating an inner stroke (sort of) on a clipped object
6
Mass-remove Bezier Curves in Illustrator
0
How can I snap to line intersections in Inkscape?