I am curious if there are particular reasons why historically, most anatomy illustrations are always done in etching?

The similar style (drawn with many tiny lines) is always found in illustrations/sketches done by scientists, explorers, and book of emblems, Dante's book of Inferno, etc. is there a name for illustrations done in this style? Can this be seen as the same style of woodcut works?

Historically, do illustrators first drew on paper , before it is etched on metal plates for mass production, or do they directly cut on metal plates? 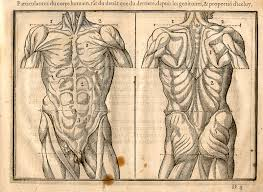 1. The scientist uses this method on his or her notes

This is mainly because ink lasts longer than a soft medium like graphite, it does not fade because of manipulating the notebook (Imagine that the notes you made in a trip by sea to another part of the world, just smudged away because of the paper was moving). And the way to produce shades is using lines with different separations, "etching".

What you see now in for example DaVinci's work are photos of the original artwork, not from a "reproduction".

2. It is used for reproduction

There were different methods of reproduction. In the first period after the invention of the printing press (and even before that in China) xylography or woodblock printing was the main method of carving an illustration. The same, the easiest way to produce gradients is by using lines.

But the real etching is made on a metal plate, not wood, and it is a newer invention, because of the advances in chemistry, mainly acids and its relation to metal plates. There is a similar method called engraving.

Now, for reproduction, some recognized artists would make the work directly and a lot more would be made by anonymous artists, some even signing as the master. In scientific books, the printing process was made later using the notes from the author and reproduced by staff from the publisher.

In your question, you are mentioning both types. Some scientific notebooks and Dante's inferno, that was a series of plates by Albrecht Dürer, meant to be actual plates and woodcarving for reproduction. https://en.wikipedia.org/wiki/Albrecht_D%C3%BCrer#List_of_works

I must say that etching has a "nice feeling", the drawings are meant to be precise in nature. Painting has a bit of "randomness" in the way it reproduces "reality".

In modern days you would use vector drawings for scientific notes, and not digital paintings, for the same reason. And also for the same reason, some drawings would be re-made by some artists using the sketches by the author, if you want a better-looking book.

Etchings, woodcuts and lithography were used for printing illustrations/drawings before photographic techniques for creating printing plates were invented.

Etchings were somewhat easier to produce than woodcuts which had to be carved in relief into a block of wood. The other advantage of etchings over woodcuts was that they were capable of reproducing much finer lines and detail - especially useful for scientific works where small details were important.

The basic process was this: a waxy coating (or resist) was applied to a copper plate. The drawing was scratched onto the surface through the waxy resist to the bare metal using a sharp pointed tool, and then acid was used to etch the final illustration into the metal. The waxy resist was removed, and the plate was inked then the excess cleaned off. The ink remained in the incised grooves, paper was placed on top, and then passed through a press.

It was also possible to prepare an illustration on paper first and transfer it to the wax resist as a guide, and then scratch through the resist and prepare the plate as previously described.