Free and easy to use tool for easy 2d animations [closed]

I would like to make easy 2d animations and I am looking for an easy tool for this purpose. The animations I intend to do are quite simple (e.g. exchanging messages between different computers, rotate a wind turbine). Basically I could also do this using MS PowerPoint, but I would like to have something slightly more advanced than PowerPoint.

Here is an example animation (it is in German but this should not bother you and I do not need the robot at all. There should not be any moving charactere): https://www.youtube.com/watch?v=yNSOrs8Xi0Q

I did some research and found synfig (https://www.synfig.org/) but I somehow have the impression that synfig is too complex (based on the things I want to do). Has someone had experience with synfig or any other simple programm. I'd appreciate every comment and will be quite thankful if you can help me on that. So basically I would like to know which tool is the simplest one to make a simple animation?

Here is a specific test.

I prepared the different elements as transparent png using Corel Draw. But you can use Inkscape, rocket, cloud, fire, etc. 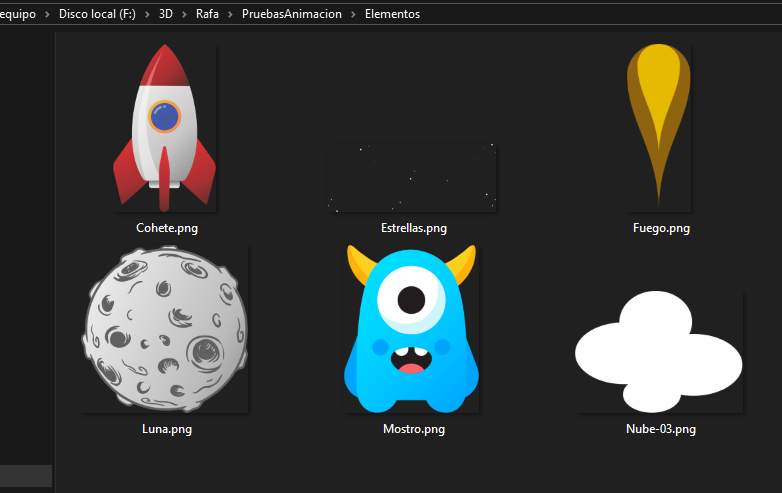 From easiest to a bit less easy.

This was the first animation I did in 28 mins approx. I was testing ways to animate the fire of the rocket.

The program is VERY light. It is less than 4Mb!

It took me only 20 mins because I already knew what I wanted by doing the prior animation. I did not pay attention to make the scale or the effects the same as the other test. It is a bit tricky to use because you actually animate inside a composition, and that composition is inside the editing tab. But it is a step that only takes 10 seconds to complete.

If you want a long video, with different scenes, different animations, this is the best option. Each scene will be a composition and all merged in the video editing tab.

I would stick to these two options. They have some useful options like defining a "parent" to another object. In this case, the fire is attached to the rocket.

It is a bit bulky, I love the program for video editing; but probably for animations, you have a bit less control than the other two. It took me about 20 mins too, but I did not detail the fire or the monster's jump.

The example you are posting is not really an amateur animation, it is simple but has several elements that make it a bit tricky.

Every program will be difficult or easy depending on the time you invest in. Synfig could be indeed a good option. The level of complexity is defined by the level of detail you need.

If you want to deliver as a video there are some other options to animate, but you need to combine them with drawing tools like Inkscape.

HitFilm express, Davinci Resolve which has some basic animation tools, or even Blender.

Another option is Open Toonz.

You probably need to make divide your project into small animations and edit them later.

But you need to define the scope of the results you want. Do you want to sync to music for example? Do you want to animate for the web, or for video? do you want some loops only?

Actually, if you do not need the robot, you could still make some good animations using PowerPoint.

If you want a moving presentation zooming in and out of different parts of a diagram, try Sozi. Another option for this zoom in zoom out animations is Focusky.

You live in the era of video tutorials, take a look at some of them, and download the programs. All I just listed are free.

Which one is easier to use, a screwdriver, a hammer, or some pliers?

The easiest one to use is PowerPoint, it has a familiar interface, you can import a ton of formats, and it is fairly intuitive. The 365 version of it is suitable for animation where you have changes in position, rotation, and scale, as the overall result your example shows, mainly using the Transformation transition and the animation panel, but in order to do the "moving smoke" for example, you need probably another additional tool. It is not free but you most likely already have it.

One with a lot of tutorials is Hit Film, it has a friendly community on its own webpage forums.

You need to enter the video editor, and then make a new composite shot.

And start animating stuff in this panel

If you do not have many elements at the same time, use Davinci Resolve. Here is a quick example: https://video.stackexchange.com/questions/30037/how-is-this-doom-eternal-still-picture-to-stretching-motion-video-produced/30041#30041

Blender is the most powerful of them all and has even a stack exchange forum. But it is not the "easiest" one... until you are used to using it.

And some others are good, but have a small fan base, so, regardless they are good (and probably easy), it is harder to find tutorials.

Not the answer you're looking for? Browse other questions tagged animation or ask your own question.

1
What animation tool is best for teachers for 2D animations?