As far as I can see, creating graphic design goes through two main steps.

I find that I am stuck in the first step.

I am new to graphic design with little professional training or real project experiences.

I love this field and can feel a bunch of lovely visual ideas constantly emerging in my head.

The disappointing fact is I can neither make those ideas into real designs nor become satisfied with the work I have attempted (both possibly because of my lack of skills and experience).

I believe there are some (possibly many) of you who have gone through this anxious period and I wonder how you have reacted to make yourself better at turning visual thoughts into real designs.

If you need ways to come up with more ideas, then check out the post referenced in the comments.

If the question is more about having ideas and getting them turned into reality, well, this is a big challenge of being a designer.

Sketch out your ideas. Get them out of your head and onto paper or on the screen. Do it with the mindset that the sketches can be quick and rough. This archives your ideas and helps you start to develop the idea further.

If executing ideas is a problem for you, you'll find that getting better takes practice. If you want to get better at math, you learn about math and then solve math problems. So if you want to get better at design, study good designs and then try to make your own. Every time you see something you like, be analytical about it. Why do you like it? What's creative about it? Would you do anything differently? As an example, I love logos that use negative space, and so when I see that it inspires me and reminds me to try and use the negative space when I make a logo.

Finally, realize that sometimes the idea in your head just won't work as a design on paper. That's not necessarily a failure on your part. I've been working on an identity project, and we wanted to try to integrate the concept of flipping into the logo. I thought to myself, "wouldn't it be so cool if the logo was an ambigram?" I spent a day or two trying to make it work, but at the end of the day I couldn't get it to be very intelligible, let alone clear and distinct enough to be a workable logo. So the idea had to be scrapped. But now I know! It's no longer an idea burning in my head; it's now something that I can move on from.

In terms of handling all the ideas that bombard you throughout your day, while you're sleeping, when you wake, when you fall down the stairs and hit your head really hard ...

The best technique is to capture everything.

Everything. None of it is junk. At least not until you've analyzed it after the fact. Then you can call it junk. Maybe. After your head trauma has healed.

Be prepared to capture a fleeting idea at any moment.

I follow a strict rule of always having sketch supplies on hand. Anything will do:
Pockets: Small scraps of paper and a pen.
Office: A full array of tools and high quality paper.

The ability to draw is an invaluable skill.

When you can draw confidently you won't be frustrated by your inability to put to paper what's running through your head. You'll also be able to capture things faster, more frequently, and in ways you wouldn't otherwise consider.

A smart phone with Evernote will help you handle all that material. Since I scribble things out all the time, I also need a way to keep them organized or at least somewhat retrievable. If you can't find the sketch when you need it, it's useless.

I used to keep a Moleskin notebook: Concepts sprinkled here and there throughout the book; things on scraps of paper in my pockets; scribbled on receipts on my bedside table. Now I snap all my notes and sketches with Evernote on my phone. I use it's organizational tools to put things in the right place right on the spot. I still use notebooks and scraps of paper but I don't have to flip through the books or hold onto the scraps any more for reference.

Here's an example of some of the dumb things I capture so I don't have to commit it to memory. This is just a tiny snippet of a web page I was working on. I also have rough sketches in that notebook that my client emailed me. It's all in the same place!

Once you have your ideas captured, you can move on to making useful resources out of them. That part will come with time. And necessity.

As I've noted elsewhere, I highly recommend A Technique for Producing Ideas to help you put all your ideas into use.

This was going to be a comment on plainclothes' answer emphasising something he implied, but I ran out of space...

When making all these notes and scribbles, it's really important to never be afraid of them looking bad. Never be frustrated that they don't come close to living up to the image in your head first time. They won't. Their role is to be a reminder of some element of the complete picture in your head - if they work as a reminder, they're doing their job just fine.

Being able to make sketches and scribbles first time that just are what you picture in your head is an insanely rare amazing talent. Stephen Wiltshire's pretty much the only person alive today I'm aware of who can just do it just like that, and he's a very unusual remarkable person. In general, people who are good at this skill of just doing it near-perfectly first time are more likely to be artworkers or artists than designers: masters of some specific medium or process, rather than designers who need to be able to adapt to new styles and media quickly. They also tend to be conservative about stepping out of this comfort zone.

Of course, the better and more fluent the sketches are the more useful they'll be - but never let it be frustrating and never let it hold you back from an ambitious idea. Your sketchbook (or digital equivalent) is your personal space where anything goes and the only requirements are that it makes sense to you (sometimes, not even that), and helps thoughts and ideas to develop. 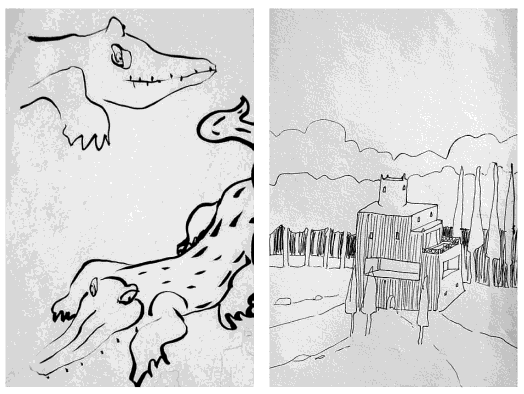 Excerpt from the book Sketchbooks: The Hidden Art of Designers, Illustrators, and Creatives. The book gets some bad reviews because so many of the sketches featured really aren't anything special to look at: but that's the whole point. Sketchbooks aren't about creating impressive finished drawings on the pages of the sketchbook. They're a tool to aid the first steps of developing ideas. If it also looks impressive on the pages of your sketchbook, that's a bonus (or, sometimes, a sign that you got carried away and spent longer than needed on that one sketch...).

Once you've got enough details, prompts and reminders down that you won't forget that initial idea, you can take as long as you like (depending on deadlines, budget etc...) to actually create it piece by piece.

It's important and liberating to become comfortable with this - that you can take ideas, stop them fading, and then take as long as it takes to make them real.

If you don't become comfortable with this, it can be crippling. There are months I look back on as being largely wasted because I was reluctant to take risks, allowing good but difficult ideas to slide rather that finding ways to hold them still while I figured out how to make them work.

40
How do you break out of current creative mind sets?
7
Beginning with drawing

6
How can you turn a clients ideas for how they want their brand to be into graphical elements?
10
Where can I find visual examples of the thought process behind different logo designs?
6
Efficient workflows for handing off designs to developers