I am trying to imitate this line style in Adobe Illustrator:

Unfortunately I am not really able to reproduce it. What I came up with so far is using a brush for the Stroke and a Width Profile. While this looks good when the lines are narrow/thin, as soon as I make them thicker, it starts to look horrible (see pictures below).

I've been playing around with some settings, but nothing showed good results so far. Do you have any suggestions to make this process quicker and get something like in the original picture? Or is Illustrator the wrong software for this. I found this "similar" thread (Text Style in InDesign and Adobe Illustrator?) but I don't think the situations are the same.

adobe-illustrator vector line-art
Share
Improve this question
asked May 4, 2020 at 17:32

One method which works at times is to use the Appearance Panel and duplicate the strokes with brushes applied. Then using Effect > Distort & Transform > Transform move the duplicate stroke slightly, and possibly tick the Reflect options to alter the "distressing" placement and hide the duplication more. At times adding a slight angle to the effect also helps. 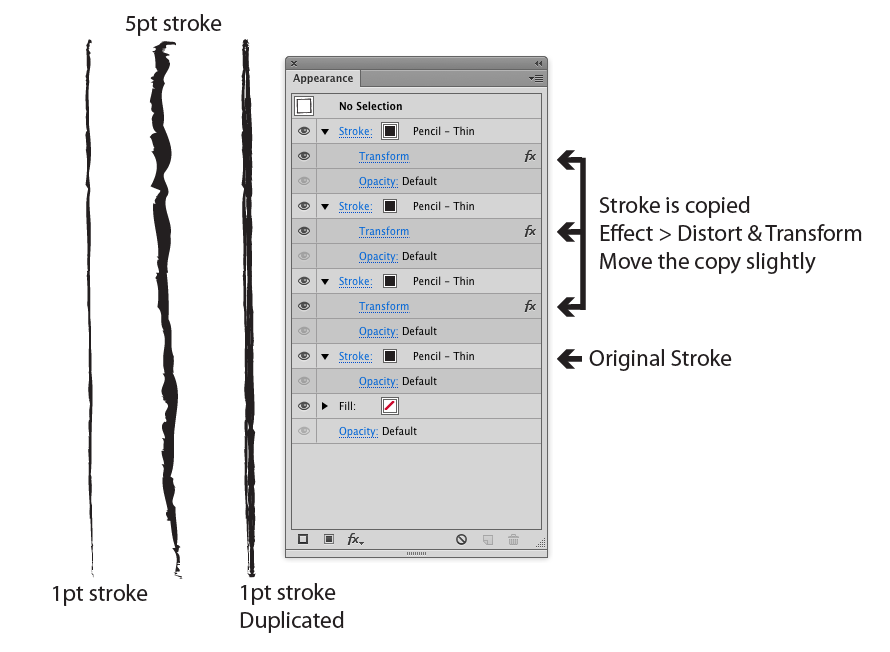 Effects related to one of those duplicates: 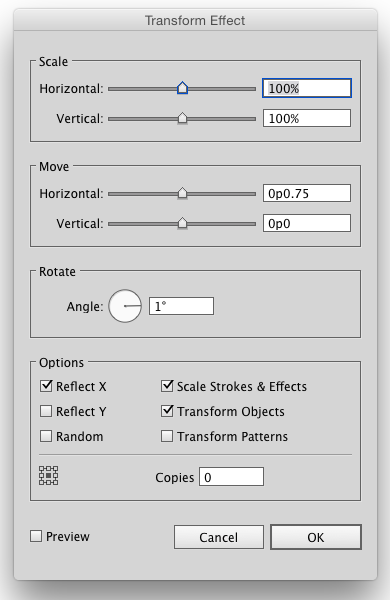 Each stroke copy was only moved a small amount. The second and third were reflected in the Effect, necessitating a 1° rotation to prevent large gaps at the ends.

This can essentially provide a thicker stroke appearance without merely scaling the brush artwork.

Note that you could also apply a different brush to the duplicates in the Appearance Panel for more variation if desired.

You can save this as a Graphic Style to be easily reapplied later.

Another option is to create your own brush artwork. You can do that using an existing brush and editing it for the stroke weight appearance you want.

Merely draw a path with the brush you want and set the stroke to the weight you want. Expand, edit the artwork as desired, then create a new brush. 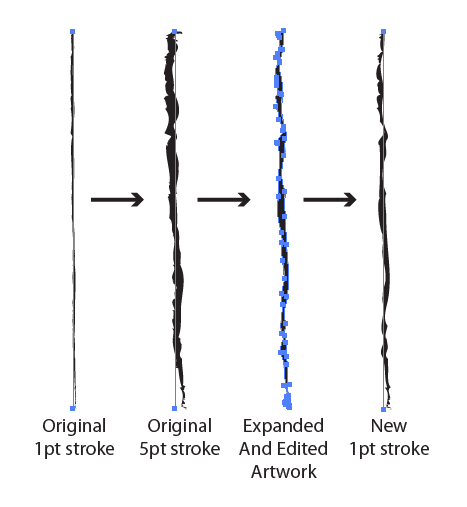 Above, I merely used Object > Expand Appearance on the 5pt stroke. Then used the Eraser Tool to alter the artwork. When finished, I dragged it all back to the Brush Panel and created a new Art Brush. Then merely applied it to a 1pt stroke. This results in the appearance at 1pt being as I want.

In short, you aren't obligated to use Adobe stock library items and many times generating your own library items, even if they are merely edits to Adobe items, can be quicker/easier than trying to "tweak" Adobe stuff to fit your desires/needs.

This is all quick and dirty to show the methodology. And panels are from Illustrator CS6, but it's all essentially the same in newer versions of Illustrator.

You should use a scanned real stroke as your pattern brush. Use the scanned raster image without tracing it. If you have high enough resolution image the result can well be good.

You must prepare the image in Photoshop. Make a PNG with transparent background and place it (do not paste, place!) the image to Illustrator and drag it to the brushes collection. See this tutorial: https://creativepro.com/creating-a-pattern-brush-illustrator-cc-using-a-raster-image/

Not the answer you're looking for? Browse other questions tagged adobe-illustrator vector line-art or ask your own question.

1
Is it possible to have varied stroke widths around the same object in Illustrator?
6
How can I easily add color to unclosed shapes?
1
False display about brush style from brush library - Borders_Novelty in Adobe Illustrator CC 2015
0
Using a shadow from Photoshop in Illustrator
0
illustrator cs6 raster stroke issue
1
Illustrator brush and pentool line. Visually same thickness, why there is a difference in points?
1
Adobe Illustrator - Eraser tool resizes my Calligraphic Pressure Brush!
2
What techniques or tools are used to create this kind of line art?