Need for help to an amateur! [closed]

I found a caricature on Adobe and I wonder how it is made? 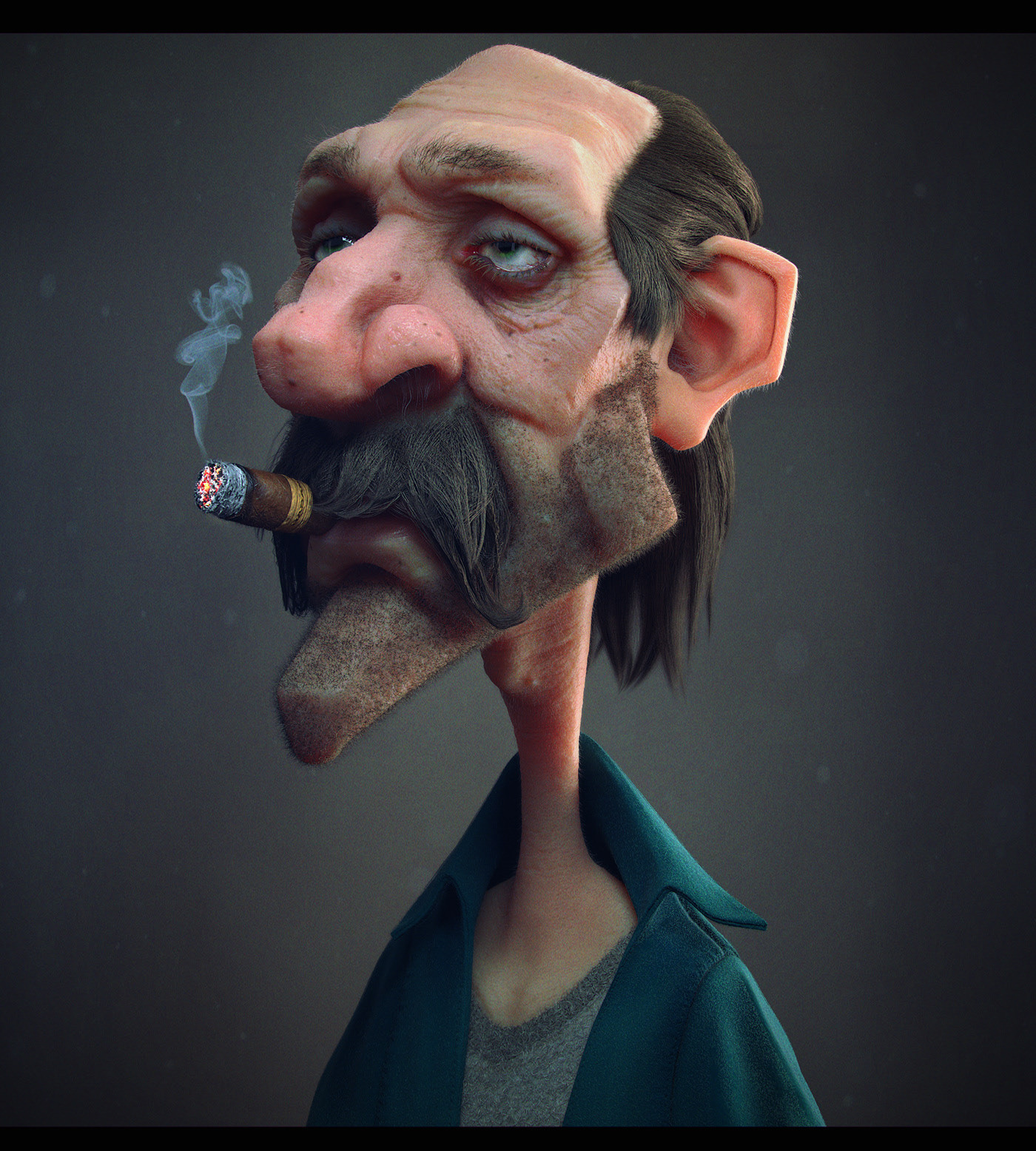 What processes are waiting for me to make this? The Author made this by Adobe Photoshop, Zbrush, Maya, and Vray
This Link on Behance: https://www.behance.net/gallery/28773337/Gettin-Too-Old-For-ThisS Thanks in advance

Want to lift your skills up to replicating this and making more with different characters and textures so that you make it from the start, not by making only some minor edits to nearly finished shapes?

That's an ambitious goal. You must learn as well 2D image editing as creating plausible looking 3D human shapes and texturizing them with complex software. If you start from zero but you can concentrate to serious studies AND have a substantial amount of talent prepare still work 2...3 years before the goal is achieved.

The sculpting is with no doubt the most demanding part. It simply doesn't happen without talent and massive practicing. You can check it with freeware. One example: https://pixologic.com/sculptris/ Trying it gives surely a quick glance what's in front of you.

If it happens that sculpting software or even better, real clay already submits to your will you are on winner's road.

In theory the sculpting can be worked around by using scanned or purchased faces and by making geometric transformations to get a caricature.

Going to school can be a good idea. Unfortunately it's not so clear you can enter one (except by paying high sums of money for private tuition) because there's fierce competition.

First let's explicitly state that the artist in question has a clear explanation of process in the page that OP lists - it's very broad strokes and an incomplete overview, not in-depth blow-by-blow, but does clearly mention the details that the artist feels are most crucial to the workflow he is developing.

Starting with the assumption that the OP has some 3D background, but perhaps not enough to produce the kind of work the artist in question is producing routinely, and thus doesn't know all the relevant steps involved, let's be kind enough to give a very-high-level overview - skipping all detailed how-to's, as those would be out of place here.

Starting in ZBrush, or MudBox, or Sculptris, one sculpts using metaballs or their equivalent - a lot like digital clay. One can do this with a fair degree of freedom, without worrying about final topology at all at this stage. Rough masses, carve-outs, some rough texturing of the actual topological surface of the mesh all occur here.

This is then exported out, and on-the-fly triangulated or quadded into mostly acceptable topology for the next stage, when you import this into your given 3D DCC (Digital Content Creation) tool of choice - in the artist in question's case, that's Maya. There in Maya, the artist will retopologise the mesh they bring in if it needs it, and start doing more detailing of the surface, (and quite possibly deforming the mesh to achieve specific caricature goals), and then assigning and developing materials - this artist at shit stage also captures curves from the sculpt mesh and uses those curves as grooming guides for hair, which is a whole complicated topic all of its own.

Some folks then go BACK into their sculpting app fr more tweaks, some don't - according to the listing of steps, this artist doesn't. They then set up an environment, lighting, finalise the model materials and set up a render - many Maya users employ third-party render engines; this one used VRay.

This tells you that this artist has sculpting chops, retopology chops, UVing chops, human skin and hair and general material / shader chops, lighting chops, and decent rendering chops too... this is a character designer and / or art director type, with some serious production artist skills too.

The only thing we don't see for sure from this is whether this artist also has the skills and knowledge to then bake all the relevant maps to create a low-poly in-game mesh from this which still looks right by using displacement, bump, normal, sub-surface scatter, occlusion, vector normal, metalness, roughness, and specularity maps to drive all the surface detail without loading the game eingine too hard and thus dropping framerates - but given the roundness of the skillset shown, I'd bet they have this task down too.

I think it's a fine example of the genre, and if you end up able to function at this level after much study, practice, and refinement, you should then be very pleased - it's excellent work.

Not the answer you're looking for? Browse other questions tagged adobe-photoshop 3ds-max maya modeling autodesk-inventor or ask your own question.

0
Which tools are used to create illustrations for the web?
3
Is it possible to divide one Photoshop document into multiple source files?
0
Creating a website background inspired by spatula stuhhi
0
Photoshop file dimensions for touch screen
0
How to create forms using a texture?