Group Selection and Pathfinder Unite Behaviour is difficult to understand

I'm at the beginning of my learning journey with Illustrator and am watching this videos to learn Badge Drawing, I Appreciate people prefer not to watch in order to answer, but I'm not skilled enough to break it down into steps, I'll just write down what I hear for now. From minute 12:46 in the clip

She unites the shapes She then selects the "Group Selection Tool" Then holds the "shift" key Then presses on the edge of one part of the unified shape Lastly she then presses the "delete" key. Magically, something happens and the shape is filled all the way through.

adobe-illustrator selections pathfinder
Share
Improve this question
asked May 23 '20 at 8:40

I don't want to come across overly harsh, but after watching that tutorial, she is her own worst enemy in my opinion.

She is not "wildly" incorrect in many areas. But she does make things far, far, far, more convoluted and confusing than they should be for a tutorial. It's not a "great" tutorial but I don't think her overall workflow is horrible. It's simply not well-geared to teaching others.

I would strongly suggest avoiding tutorials that use random shortcuts as tool names. There is no "a tool" or "v tool" -- there's the Selection Tool whose shortcut is the v key - and the Direct Selection Tool whose shortcut is the a key. If the tutorial author can not be bothered to use correct tool names, all it's going to do is confuse the viewer.

In addition, there are entire areas in that tutorial where she simply spouts off a list of shortcuts one after the other. That makes for near impossible retention and only ensures you are doing a great deal of rewinding.

Great tutorials will use correct tool names and show you the menu items as opposed to just "reciting" a list of shortcuts.

The overall construction of merely the seal is so overly complicated in that tutorial.... In short.. the entire "duplicate and use group selection to delete everything else" is pointless. It is overly complex construction where it's not necessary. Just draw 2 simple circles and align them. Then apply the zig zag effect to the outer circle, it's that simple. 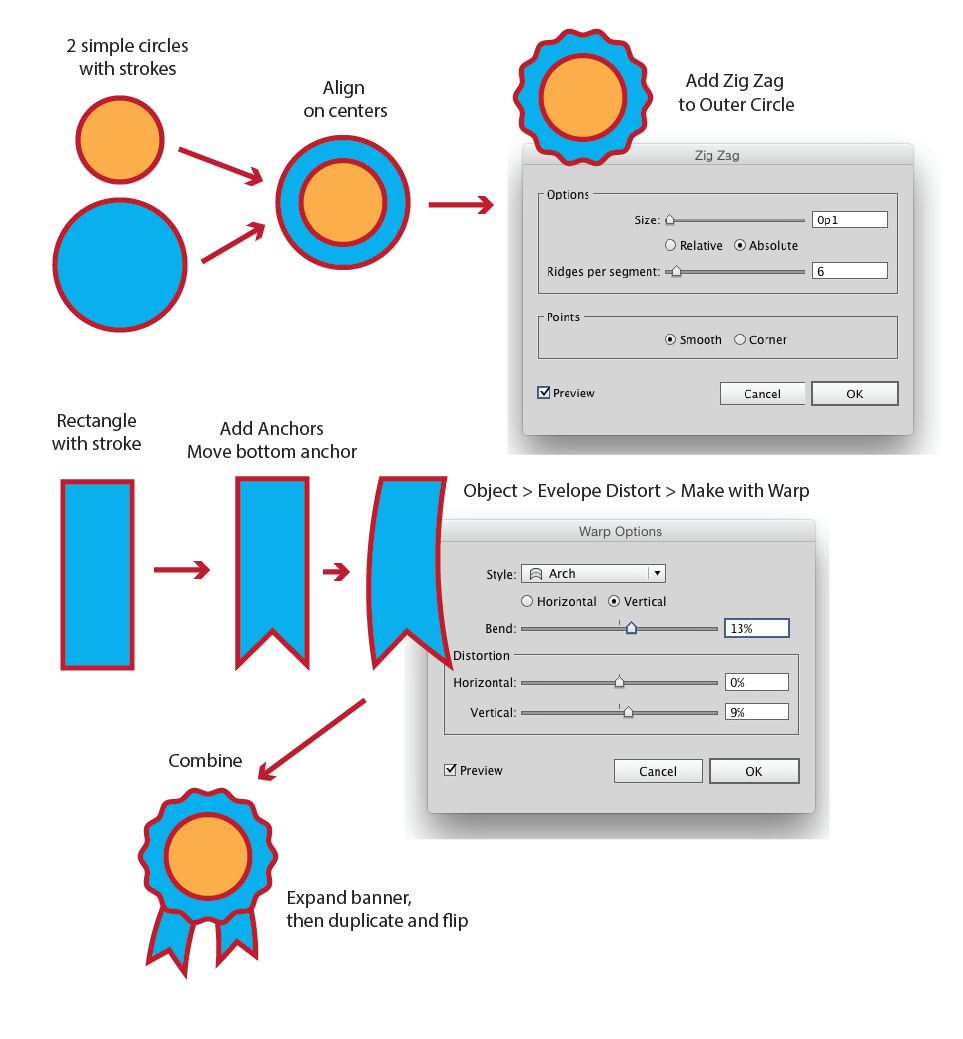 Don't use the Warp item in the Effect menu as she does. Use Object> Envelope Distort > Make with Warp It's the same appearance without being dependent upon the object's rotation.

To be honest, I quit watching the moment she used the Effect Menu Warp and then had to explain why it had problems. That's just bad tutorial writing in my opinion. Again, it's not like she's building things in a "bad" or "poor" fashion - she is not. She's simply making things far more difficult for a tutorial viewer than they should be.

Not the answer you're looking for? Browse other questions tagged adobe-illustrator selections pathfinder or ask your own question.