I'm trying to create a repeating pattern of objects that scale and rotate to create something similar to the peacock design within the circle in this Alphonse Mucha Illustration, Is there any way to automate or duplicate transforms to acheive this? 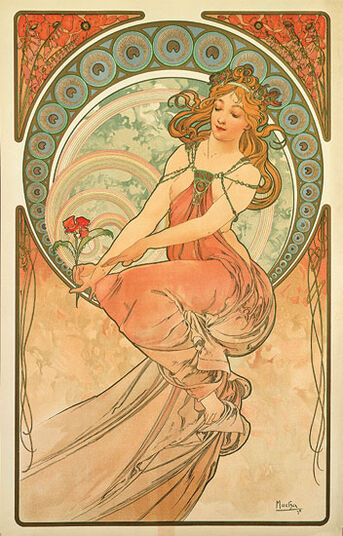 Alt+ drag the selected object make a duplicate of it. For more control on final shape, go to effect-> Distort & Transformation->Transform... in menu bar and there you can change the angle, number of copies, scale, movement of final and all copies. For more information watch this Lynda.com tutorial.

I think you could only automate this so far, unless it could perhaps be scripted. Adding a transform effect will not get you a circle, only a spiral.

In the absence of a script, I'd use a step blend for this, then curve the spline of the blend into a semicircle, then expand the blend, and move the pieces into position manually. 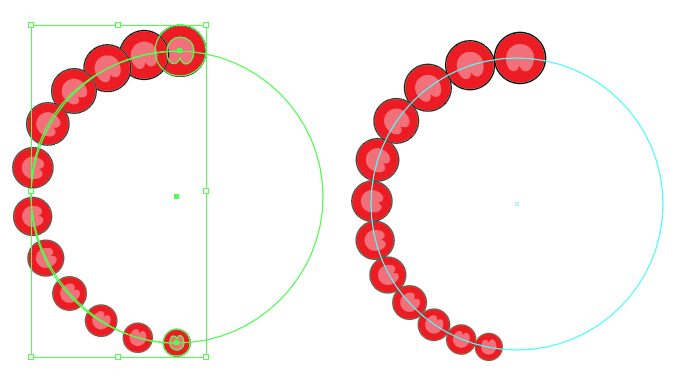 Obviously once you've got half a circle, you could duplicate it and reflect the other side.

The small circles in the example are fitted between two bigger circles like the green ones in the next image. 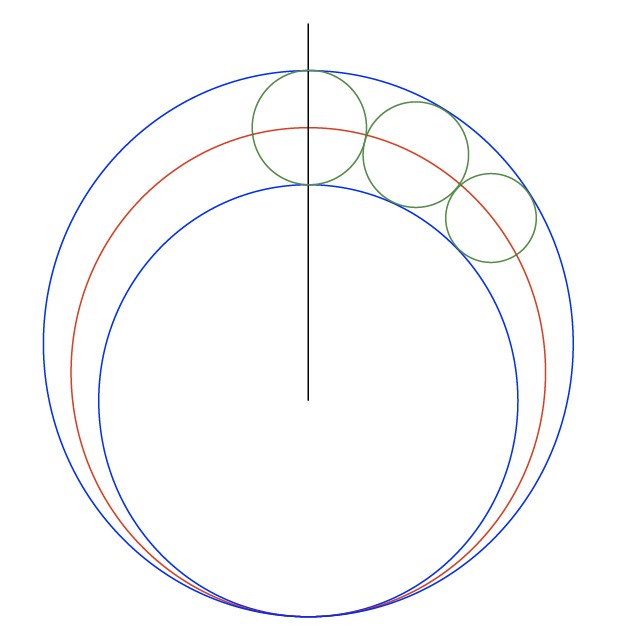 Their centerpoints must be on the red circle which is the average of the blue circles. There's no practical snapping nor scaling mode in Illustrator which helps to insert a new green circle perfectly tangentially with the blue circles and the previous green circle. The ones drawn above are drawn by eyeballing and do not stand any near inspection.

The tangential circles can be described as equations if one can handle geometry with complex numbers or vectors. I tried it but the equations grew to such dimensions that a proper mathematician was needed, so I gave up.

CAD programs have generally circle drawing mode "draw tangential to 3 circles". With it the construction is elementary and depending on the program it can probably be scripted. Here's a screenshot of manual construction in a freeware CAD. 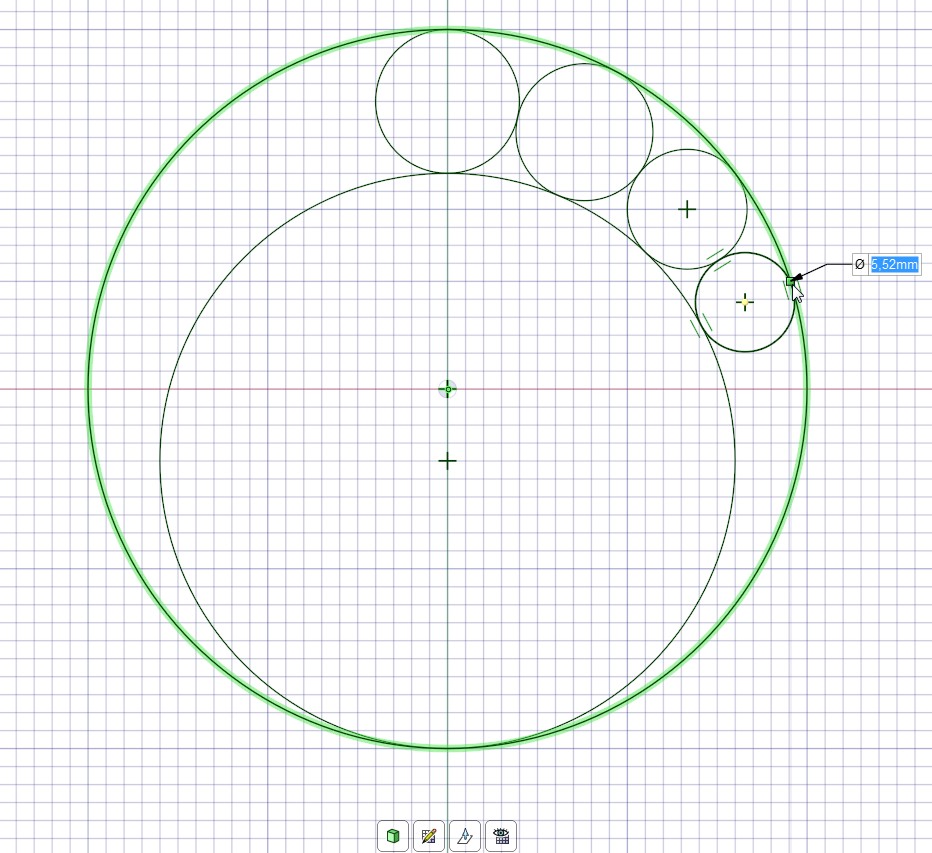 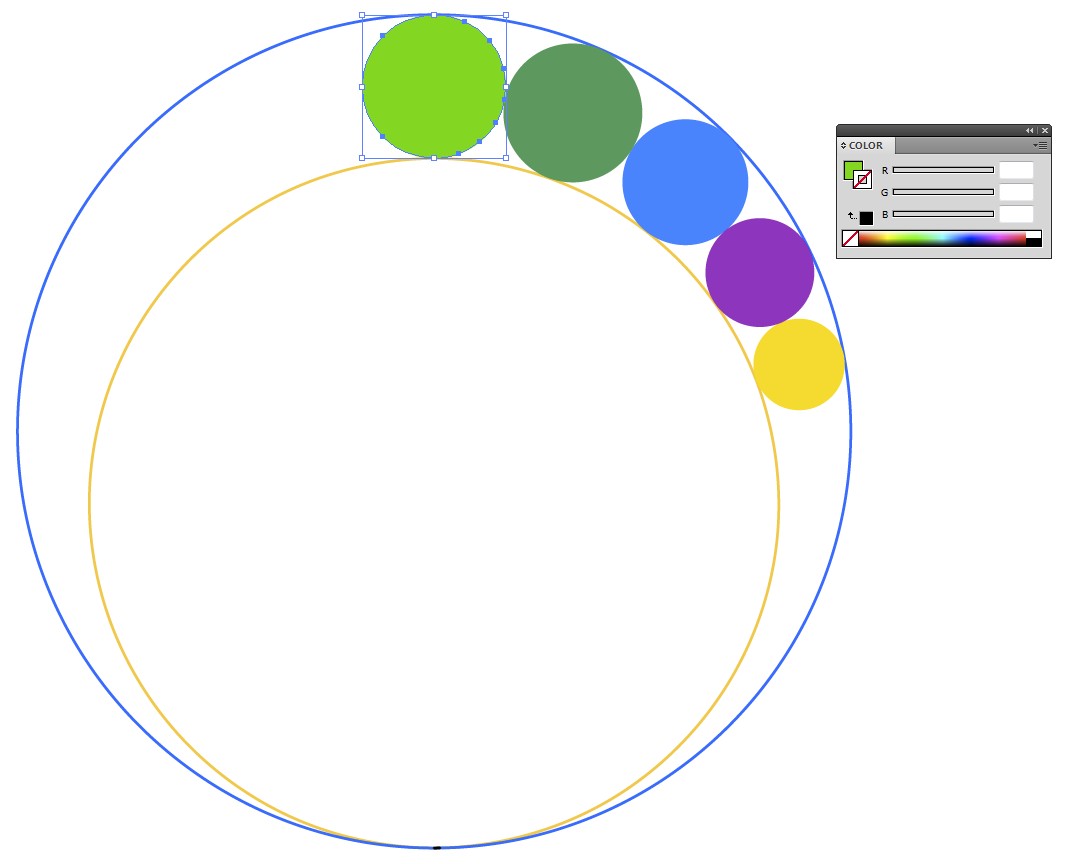 If you look at the selected item you see it's quite complex curve with numerous anchors. Actually there were separate open paths between the anchors. To get colorable shapes the areas were filled with the Shape Builder. That's the unfortunate result when circles were converted to splines in PDF.

To keep it simple it should be drawn in Illustrator. Eyeballing isn't a good option, but Illustrator has CAD plugins. I haven't them nor know their capabilities, but search for them. Start by checking Astute Graphics website.

Not the answer you're looking for? Browse other questions tagged adobe-illustrator transform scale rotate or ask your own question.

2
How to scale arc corners to be equal?
6
How to transform a pattern without affecting its parent objects' shape in Illustrator?
1
A way to automate or speed up transforms on multiple layers in After Effects?
0
How to scale objects around a point, mantaining an anchor point fixed on illustrator?
3
Circle with arrows in Illustrator
6
How can I rotate a pattern overlay layer style?
0
View / save pattern transformation (Illustrator)