First off - I am not a graphic designer, but want to be. I have become a little familiar with Photoshop and yesterday was my first time using Illustrator.

I purchased this image from shutterstock - http://www.shutterstock.com/pic-116461561/stock-vector-retro-poster-design-with-clouds-vector-illustration.html

I thought I could just open it in Photoshop, the text portions of it would be in separate layers. I could just edit the text in those layers and voila I will have a poster with my text instead of the sample text but in the same style as the sample.

Well first I found out that if opened in Photoshop, the whole file is converted/merged/rasterized into a single layer. So I opened it in Illustrator. In illustrator there is a layer for each letter in the text and they are compound paths (I learned the term half an hour ago). I could not find any way to change the text even when I have a layer with an alphabet selected and the type tool selected. I 'released' the compound paths thinking that will show the real text layer, but no and of course the text lost some of the styling/effect .

This is how the layers look in Illustrator - 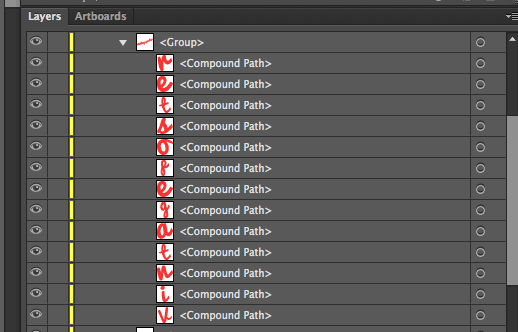 Is there a text layer at all? Is there a way to modify the text while keeping the style the same? Or if its not a text layer, did they hand draw the text with the pen or pencil tool? If they actually used a font, do you recognize it what font this is? And what effects have been applied? Sorry for the slew of questions.

The text in your file has been converted to outlines. This allows you to work with the art without the font. Unfortunately, it also means you can't edit the text.

Your only option is to delete the type and replace with whatever you like.

Isolate the text from everything else (you can hide all the other elements by clicking th 'eye' icon on the layer) and then take a screenshot of the text part only. Upload the image of the text to whatthefont and let it find you the type. Once you have the type, either buy it from whatthefont or search for a free download on google. whatthefont is not 100% accurate.

In the layers box on Ps, if you wanna change the text on a downloaded logo, right click on the logo tab in Layers and scroll to replace content. Ai will open and you can edit the .eps file and save it to the logo folder. Use the gold Ai .eps file after that is done go back to the layers box and right click again. Go to replace content and double click, Ai will come up again and go back to the logo folder and double click on the gold .eps file. It will automatically change it to what ever you edited the text to be....