Looking to find how to make this type of 2D animation

I am currently interested in how (what program to use) to make this effects of lighting and animated aura in the following video. 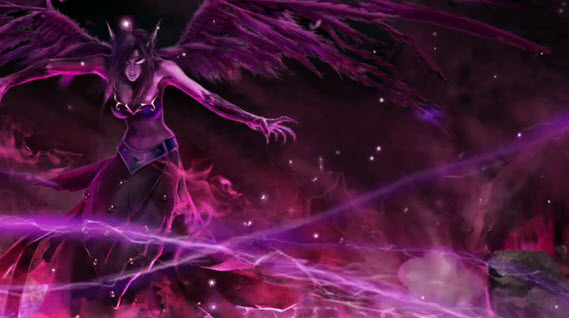 This whole effect is what Riot Games uses for their log in screen for a game called League of Legends. (The video is actually of a character from the game, which is why I mention it)

This question has been found to be not constructive on the game development stack exchange. However it did link to a more general question about 2-D animation which might be worth your while.

All of that having been said, the files Riot Games uses in the end are swf files. A swf file indicates that Adobe Flash was used in the process, which may have been used for some animations, though more than likely Adobe After Effects was used for the animations. The static image in the background is more than likely made with Adobe Photoshop, some of the other elements could come from various other programs, or could have also been made in Photoshop (such as the particles). Overall the effect is really not too complicated as it is just a series of simple 2-D animations on a static background.

It's really not a black and white question, there's tons of software out there to do an effect like this. If you want an exact process only the person who made it can tell you but hopefully this is a good starting point for you.

It was more than likely done in After Effects. Chances are they probably used a 3rd party plugin for the light effects as AE hasn't got the greatest selection. My guess is that they used Red Giant's Trapcode. Trapcode is very industry standard for motion graphic artists.

Not the answer you're looking for? Browse other questions tagged animation effects or ask your own question.

1
Where could i start to try and make something like this video?
1
How does the pixel aspect ratio affect motion graphics?
4
How to make this explosion animation better
4
What do you call this type of animated graphic?
3
Can anyone suggest a program I can use to make a simple animation?
1
How do I create a video with animation loops?
0
Does this fall under 2D Animation or 3D Animation?