I'm trying to create a VU meter in Illustrator. I've tried various methods but cannot achieve the result I like. (I tried blend tool method, and also warp Arch method as seen in my example attached.) I got a response from another Illustrator user, but I must admit it's a bit confusing. I'm stuck on the 1st step, which has to do with the transform pallet

1) With the Line Segment Tool Click Drag between the ends of the visible part of the indicator, then in the Transform palette select the top right Reference Point and multiply the W or H value by a sufficient number (maybe 1.5) and press Ctrl/Cmd+Enter to extend past its centre of rotation;

8 ) Cut all parts as desired, either

8b) Select all the parts and Object>Path>Outline Stroke and use the Pathfinder operations to cut;

I think the Warp Arc Effect still works, you just need to refine the settings to get a closer match. Selecting the objects and adding a Warp Arc of 32% Bend and -3% Vertical Distortion worked for my object. If you add a small negative vertical distortion, it helps sell the effect. Then you can move the lines around to line them up.

If you spend more time, I'm sure you could get almost an exact match.

The arc where the dB marker lines and number reside is not at all circular. The needle of the meter rotates around a fixed axis but its rotation center is totally different. This is typical in audio devices, round meter scale is rare.

Having an artistically refined custom "volume unit" scale is not a fraud as long as no claim of obeying a certain standard nor scale division as decibels isn't presented.

The next image hopefully gives some idea of non-round VU-meter designs: 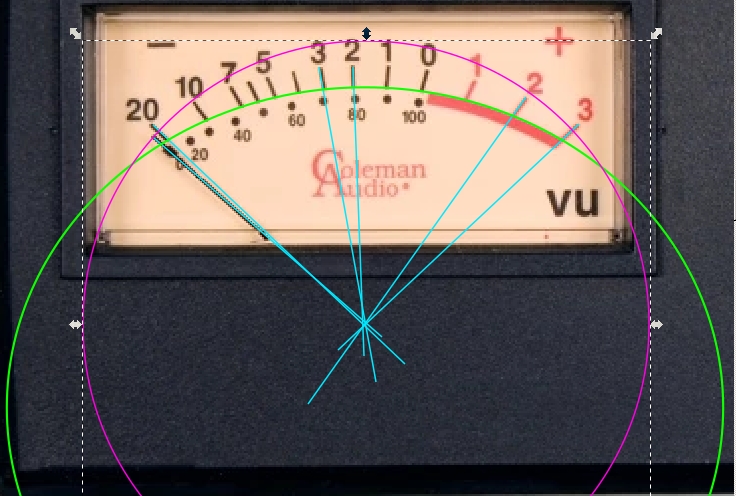 The needle is the radius of the magenta circle, but the revolution range is typically only 90 degrees in consumer devices.

How to calculate the exact needle positions is actually off-topic here but the formula is simple for meters which get their signal from perfectly designed analog circuits which rectify the signal linearly without the original diode rectifier non-linearity. If we say the needle position for totally silent signal i.e. far left is zero degrees and for maximum (=+3dB) signal it's +90 degrees we have the following formula:

D is the number of decibels.

That 60,64 degrees in the formula is actually 90 degrees divided by sqrt(2) as persons who know decibels surely see.

The ideal needle positions for 90 degrees max. deflection are in the next Excel table. The calculation accuracy is 0,1 degrees or better:

The smallest commonly shown number is -20dB in VU-meters. The needle position for it is 6,4 degrees. As you see, in my previous image the -20dB marker is placed at less than 6,4 degrees apart from zero angle and the -3dB marker is far from 45 degrees. It's not possible to decide here is it an attempt to compensate not so perfect (=non-linear rectifier) measuring electronics or is it an artistic decision for better look. At least there's no mention of decibels.

The next image has green "artistic" ellipses, a magenta circle to show the actual rotation path of the needle and some magenta lines for a few needle position markers. 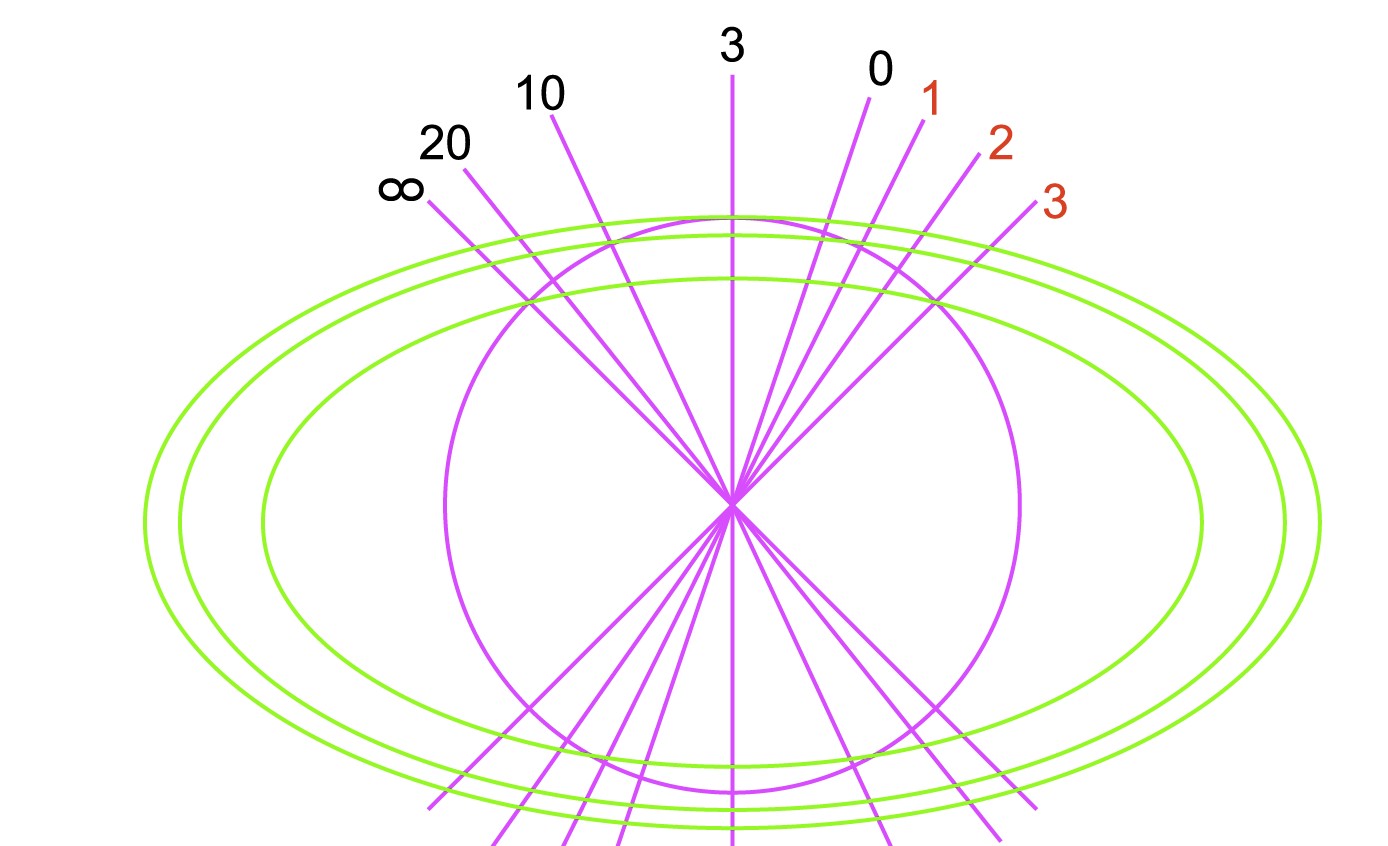 The green ellipses are made by scaling the smallest to 2 bigger sizes. They have a common center but they are aligned only horizontally with the needle parts.

In the next image the all lines and curves are are selected and Pathfinder panel's Outline is applied: 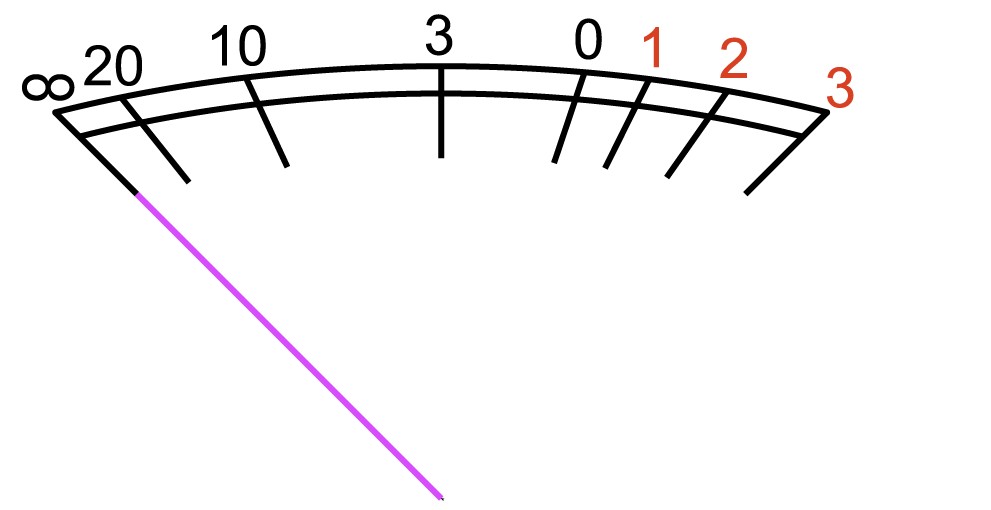 Pathfinder panel's Outline splits every line and curve at every crossing and removes all colors. The result is a group. After ungrouping the splinters are recolored and the extras are deleted. The numbers are inserted manually.

In the next image the overdrive area and non-distorting area are colored with the Shape Builder + by selecting the stroke colors, the intended device front panel hole is drawn and the needle and it's possible path are shown as magenta: 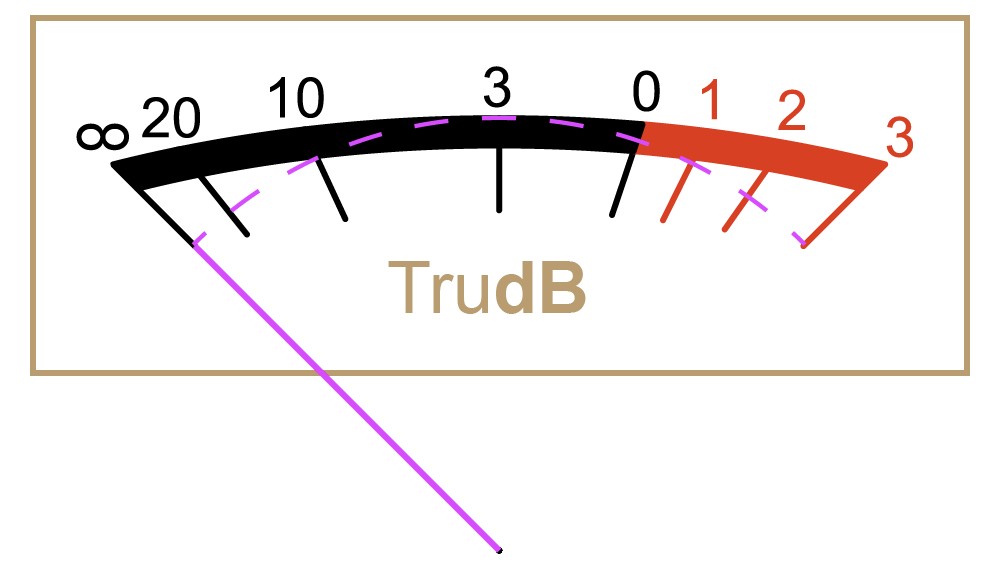 Not the answer you're looking for? Browse other questions tagged adobe-illustrator vector shapes transform or ask your own question.

29
Scale drawings in Illustrator, maintain proportions of line weights and effects
1
Interactively drag constrained 45°/90° line
0
Close an open path with an open shape in Photoshop CS6
2
Dividing a colour wheel (gaps)
1
rotation target and illustrator actions
1
There is no bounding box around line in Illustrator CC 2017
0
Adobe Illustrator simple question. How to recreate simple ellipse?
1
Illustrator: How to trim of the edges of a line such that the line is aligned with the boundaries of a rectangel
6
How can I make an infinite blend in Illustrator?