Dashed line to fill instead of stroke

I am wanting to create a dashed line on the fill rather than the stroke if that is a possibility? I created outlines of a font and now I want to make it dashed. The left 'S' is what I am hoping to achieve, Its done badly but what I did is just overlay white rectangles on top of the path to imitate the dashed effect. Hoping to find an easier and more consistent way of doing this instead of individually moving the rectangles. The right 'D' is the adding a stroke to a path which is not want I want as I would like just one dashed line. 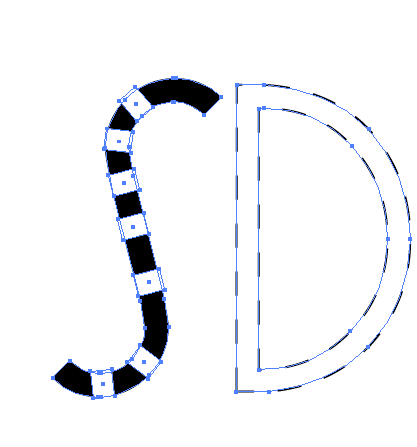 2
How can I make a dashed line border with an empty inside?
2
How do I keep the spaces in my dashed line from changing when I modify the line length in Illustrator?
1
Curved dashed line in Photoshop
0
How to change Live Paint Objects stroke color
0
Join paths to make one single line drawing so I can gradient the stroke
5
How to create dashed lines/arrows in Illustrator
2
Adobe Illustrator: How can I change the profile of a dashed stroke?
2
Make complex form appear “disappeared” using dashes
0
Illustrator Fill in Paths that Cross
3
Illustrator - make an existing path/shape spikey