How can I determine if my color QR code is reliably readable?

I developed this QR code for my business, and I went with a gray/pink color pallete rather than black and white for aesthetics. 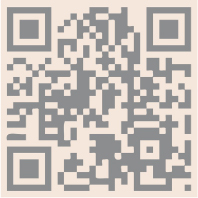 Based on my experimenting with my monitor (iMac) and QR reading app (Red Laser) I can read the code successfully - but it is hard to know if it will work with a variety of displays and readers based on this one test. Is there some numerical guidance of contrast or color choices that are generally gaurenteed to work for any combination of display/print and reader?

QR Codes are pretty robust. According to this article, "QR readers begin to have difficulty reading codes below a ratio of 4:1".

Plugging the color values of your provided QR Code into the tool linked in that article, you have a contrast ratio of 2.74:1. However, the two applications I have on my phone were both able to read your code, so this isn't an exact science we're dealing with.

Another consideration is the size of the QR code. I have tested this before; I was able to read codes down to 13mm. 12mm would not scan no matter how long I waited. 13mm would scan but not right away if I recall. 15mm seemed to be a safe choice:

Since you have this tagged under web-standards, I assume that this will be displayed on a web site. It is difficult to translate metric units to screen units, but hopefully this gives you some guidance.

If it's going to be on a web site, why not make the QR Code a hyperlink to what the code resolves to? If it's not going to be a hyperlink, perhaps set the decoded text as the alt text. It's always nice to have a fail-safe.

i think it depends on apps...so therefore, try finding out about the most used free apps that people use and test it out manually with normal phones. Not with 8 MP camera.

Not the answer you're looking for? Browse other questions tagged barcodes web-standards or ask your own question.

3
is there a fast way to trace a QR CODE without having to lasso it.
1
How do i maintain the size and integrity of my QR code in Photoshop?
4
Converting bar code to CMYK "True Black"
1
Can FontLab edit and output a webfont without losing data?
1
Why is it customary to put a picture in the center of a QR Code in China?
4
Design Considerations for a custom UPC code
43
Is the use of a QR code worth the space it requires?