How to make a gold plate in Inkscape?

I'm intending to recreate a square shiny gold plate. I've found in this video but I couldn't reproduce it as I don't know how to work with multiple gradients.

Does it exist a better guide on how to do it?. I've intended to use gradient tool in fill options in a square plate but the only thing which I got was a simple gradient whose background color was white, can someone help me with this?.

Hopefully you have done as already suggested by user Billy Kerr and learned how to make more complex gradients than one color to transparency.

What is a gold gradient? It's a cliche. One picks to a gradient colors which can occur in a photo taken from golden objects in an environment which doesn't add too much other colors. Polished gold reflects well like a mirror with yellowish cast so keeping the scene golden there cannot be much other colors reflected from the gold.

The next image has a photo of gold bars and a rectangle filled with 6 stop gradient, all stop colors are picked from the photo:

The rectangle doesn't look flat, it's like a piece of cylinder in an environment where the light is a mixture of white light and reflections from gold. Actually there's no other information available of the surface curvature. The impression "it's cylindrical" is only a result of numerous seen images which have had somehow resembling shading and we knew they were cylindrical.

The white highlight is an error. The photo is adjusted so that the brightest area would need brighter yellow than our RGB color system can make. It's clipped to white 255,255,255. People who adjust photos do often the same because it makes more contrast possible. The price is whitening the brightest colors.

The next image is a theoretical palette how different greyscale colors behave when the get successively reflected from gold: 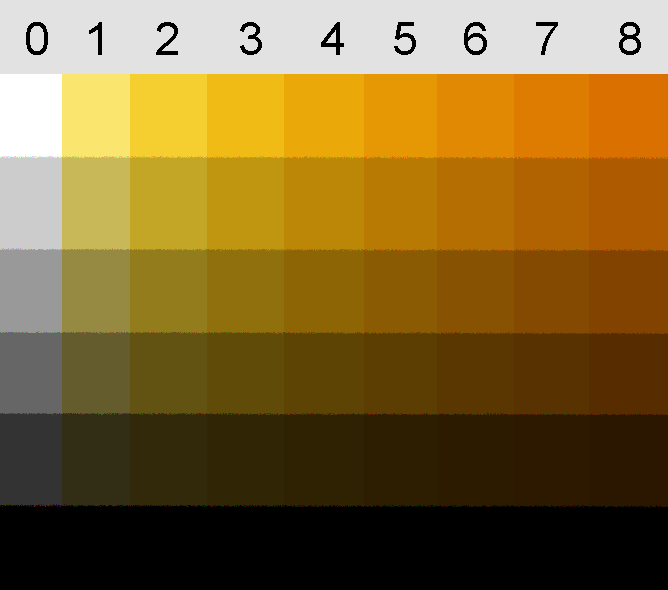 The top line is pure white reflected 0...8 times from pure gold. The next lines are dimmer greys with same reflections.

Remember: Pure white in an image of gold is an error caused by the limitations of our RGB system. Dimmer greys on gold (except black) are impossible. Black = no light.

If you want to draw a flat rectangle with gold gradient the color differences cannot be wide. In the next image the start and stop colors are adjacent in the previous table:

It doesn't look polished. It's matt or the environment is featureless. A realistic polished flat surface in realistic environment could look for ex. like this:

If you are going to draw something more complex which should seem to be gold you are not aiming especially little. See this old case:

There few of us have tried to draw some gold ingots with different methods. Also 3D models are shown. I must admit that rendering a 3D model does it much easier if any realism is expected.

2
Emulate gold letters in Inkscape
4
How to make a deep bevel in Inkscape
3
Gold, Silver, Bronze color swatches
1
How to make a nice vector field with inkscape
0
How can I blend the gradient from two rectangles in different directions?
1
How to create the texture of a rope and a knot on inkscape?
0
How to create retro text effect using Inkscape
0
InkScape - How to make this image standout
1
Gold shimmering texture effect for photographs