How to make a bended grooves effect or carved lines of continuity seen in doors and joints from cars?

this is a separate question from a project which I'm working on. I'm struggling with how to make the grooves and hollow incisions which seem carved in a flat surface?. This happens when there is a discontinuity due the two objects have been placed together.

In my project the part which is contiguous to the front door and the back end of the VW bus look like is sinking inside the surface. How to achieve this effect?. This is seen in the arrows pointing in the image and the rounded portions.

I've attempted to retrace the object by drawing a bezier curve but the result is just a flat color.

Then I've attempted to duplicate and increasing the stroke to use it as a shadow effect but this didn't made the effect the way I wanted. The problem arised in the curve, as the "shadow" seems to go along the initial stroke from the bezier curve. Therefore my question. Does it exist a better way to achieve this?.

In my effort to look for an example of how the light goes in the incisions I've found this picture of a real VW bus which has the matching colors of the profile which I'm drawing. 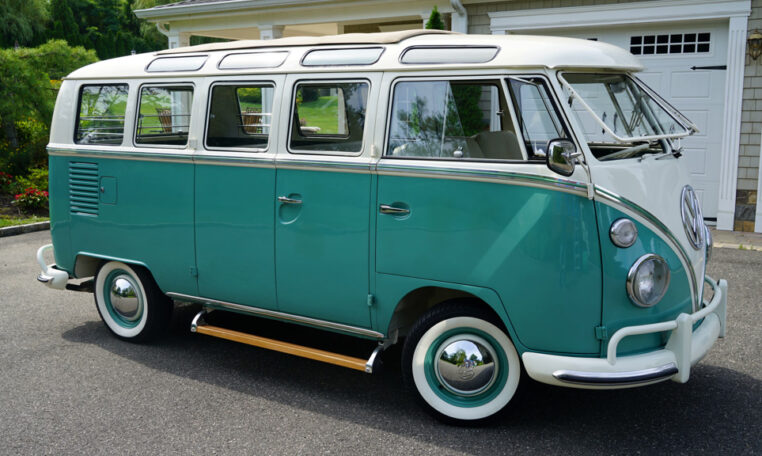 From it looks as the joints caused by the discontinuity of the doors stick in while the frames in the upper windows stick out and the windows in the passenger line are sticking in.

In general I'm having this problem when trying to recreate this effect when happens in the doors from cars and lids or any other coverings over the hood.

Your orange VW example is coarse. The groove between 2 surfaces is only a curve with darker color. It can be grey with blending mode multiply. The darkness of the grey is different in different places. Partially transparent black can also be used. It works with normal blending.

I guess you expect something which stands bigger size. Dark curve is plausible only if the curve is shown about 1 px wide on a display.

The next example is a little more complex. There's a dark gap between the red surfaces. The edges of the surfaces have strokes which are colored to make a little glossy, but coarse shading for a light which comes from the sky. The gap is black stroke. 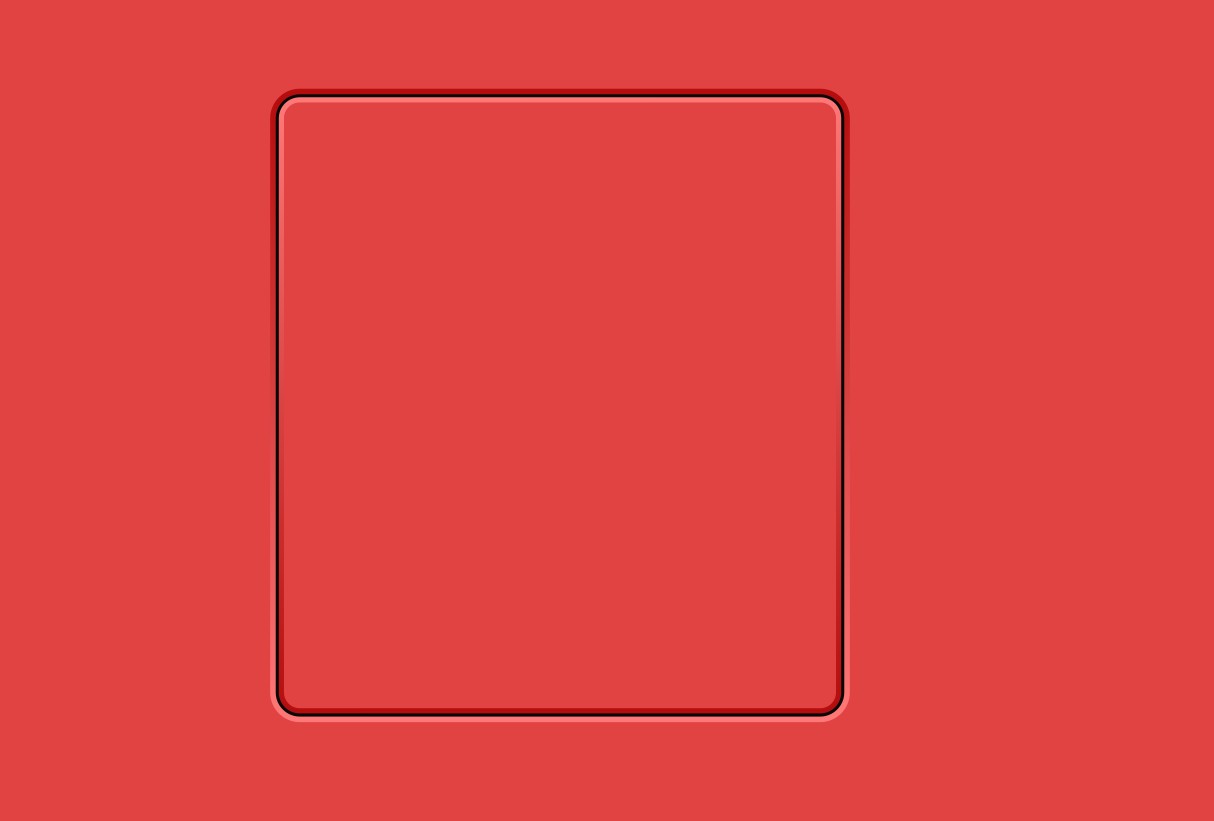 It's three adjacent curves drawn on a flat surface, black in the middle and around it there's strokes with vertical grey gradients. One is dark to light and the other is opposite light to dark.

The gradient strokes have blending mode Hard light, so the over 50% grey appears as highlight and the under 50% appears as shadow.

I see this is a little lousy. Curves should be splitted to smaller pieces which should have different gradients. This is again an example how glosses make things complex. Besides three exactly adjacent curves are tricky to draw (see NOTE1)

If you can live without glosses you get plausible grooves with rounded edges very easily:

It's simply 2 copies of a black curve on a solid flat paint surface. The bottom curve is blurred to make an impression of curved edges. The top curve is solid. You can reduce its opacity or change its color lighter if deep black feels too deep. In the example the opacity is 75%.

Blending mode Normal works well because there's only partially transparent black, nothing is made brighter and there's used no white.

Here's the same curve zoomed out: 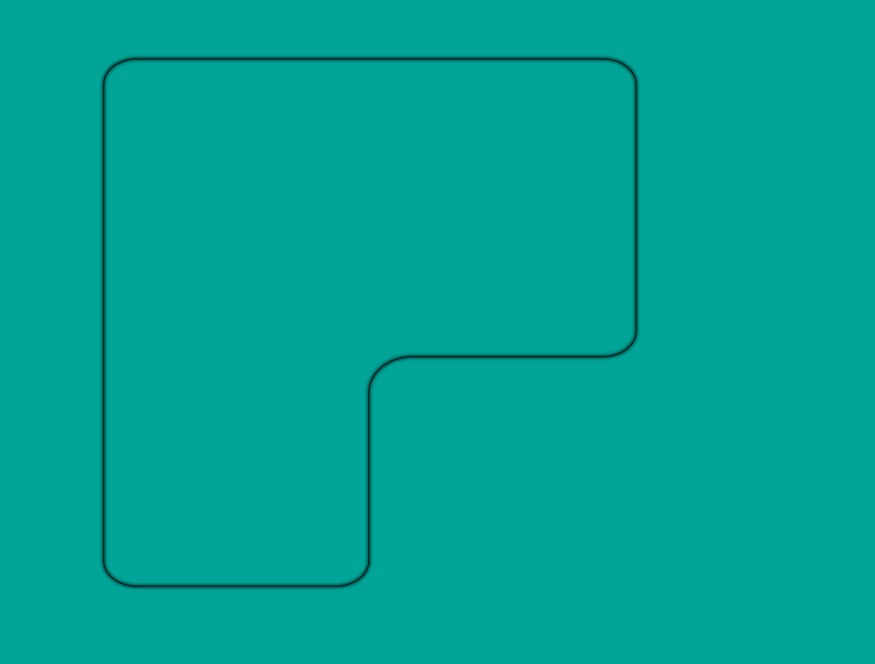 You can insert glosses here and there as separate light shapes but it's not beginner's job. Making it well takes the direction of the light into the account consistently. Here's an example how the glosses could be placed. The groove is wider to make everything well visible and the light comes from 3 different directions behind the watcher: 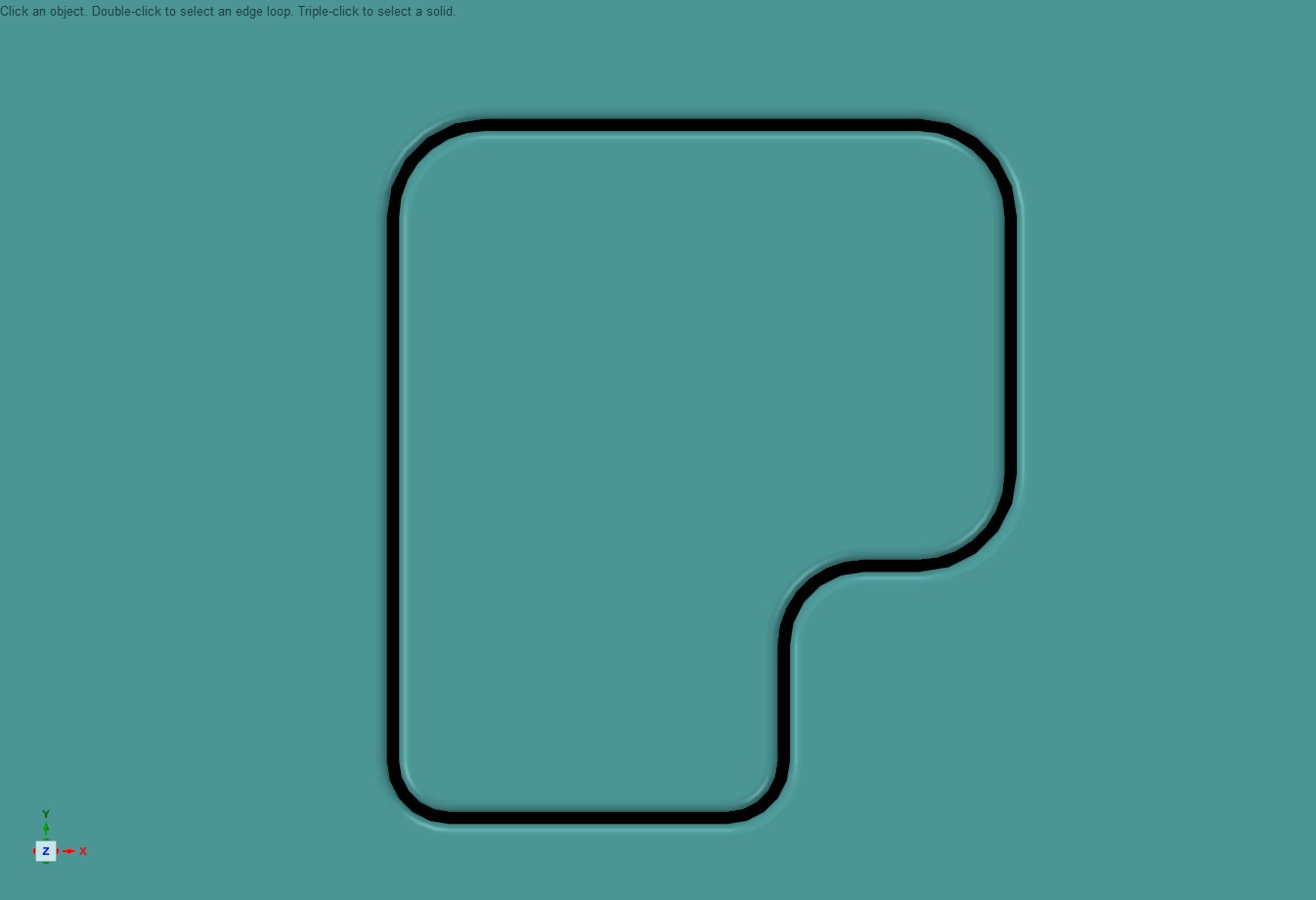 Do not assume I had patience to draw these glosses. They are made automatically by using an entry level 3D CAD program (=DesignSpark Mechanical, the free version). In 3D you get different views from the same drawing with no effort. Here's one: 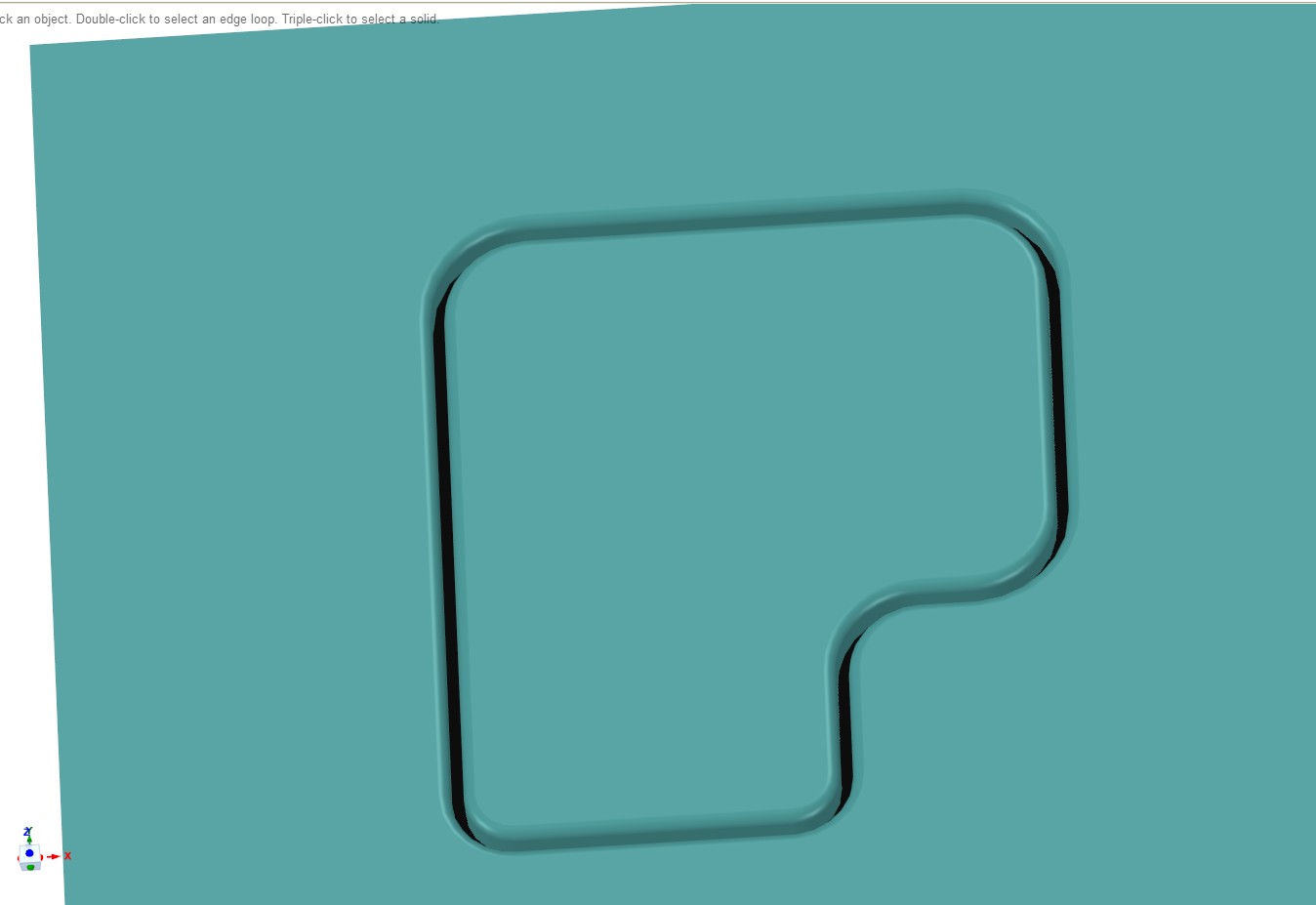 NOTE1: Three adjacent curves are tricky. Here's one method for closed paths. Other methods exist for ex. based on "Offset paths" or on "Pattern along a path". This is exact and simple and the curves stay single stroke paths.But it works only with closed curves. You can insert a dummy part to close an open curve and split it off later if you need adjacent open curves.

Draw a curve. Here's one. The stroke width = 0,5 mm. Make a duplicate. Ctrl+D makes one on the top. Let it have double stroke width, in this case 1 mm.

In the next image the duplicate is moved temporarily apart and recolored to show it.

Beware moving parts! Later they are impossible to get aligned back. Snaps will not help later!

Convert the duplicate to path with Path > Stroke to Path. It becomes filled area. Remove the fill color and insert 0,5 mm stroke: 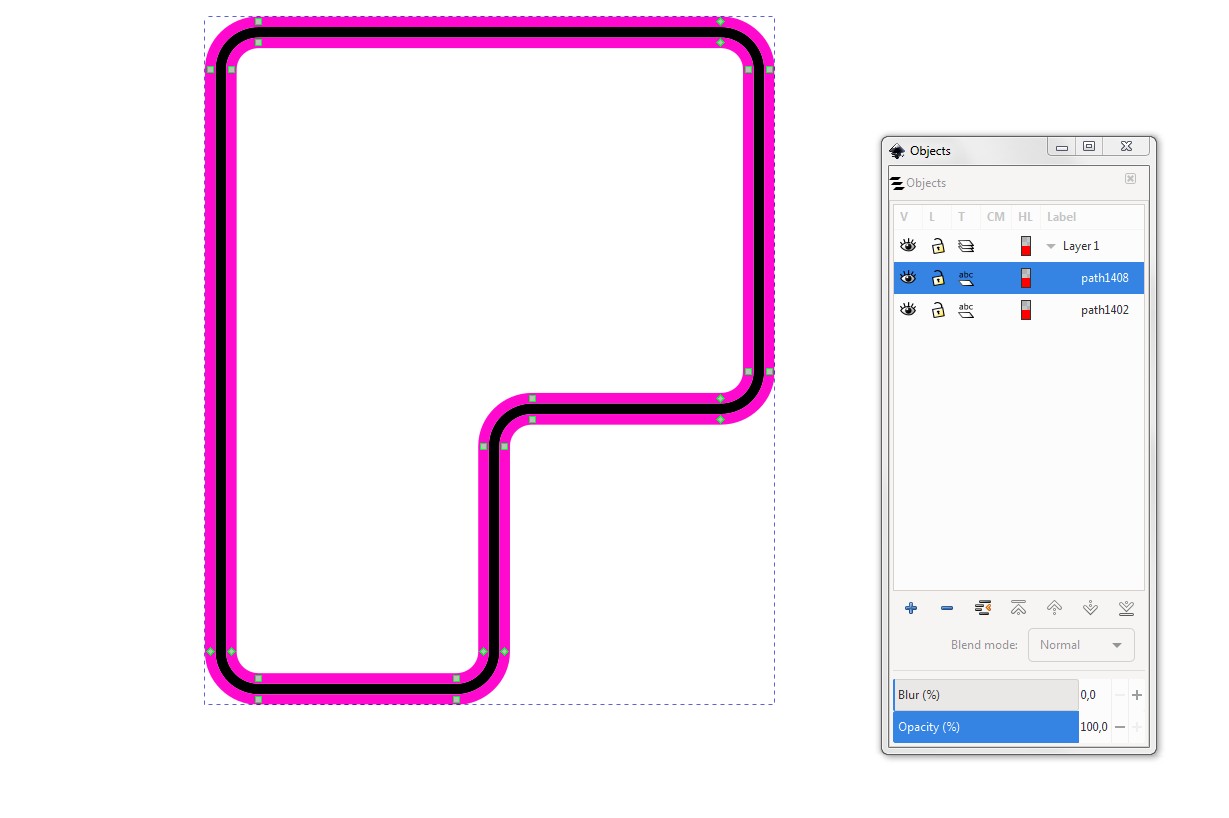 The magenta part is now Combined Path which occurs as one item in the Objects panel.

Split the combined path to 2 separate paths. Apply Path > Break apart. Then you can select and recolor the strokes independently: 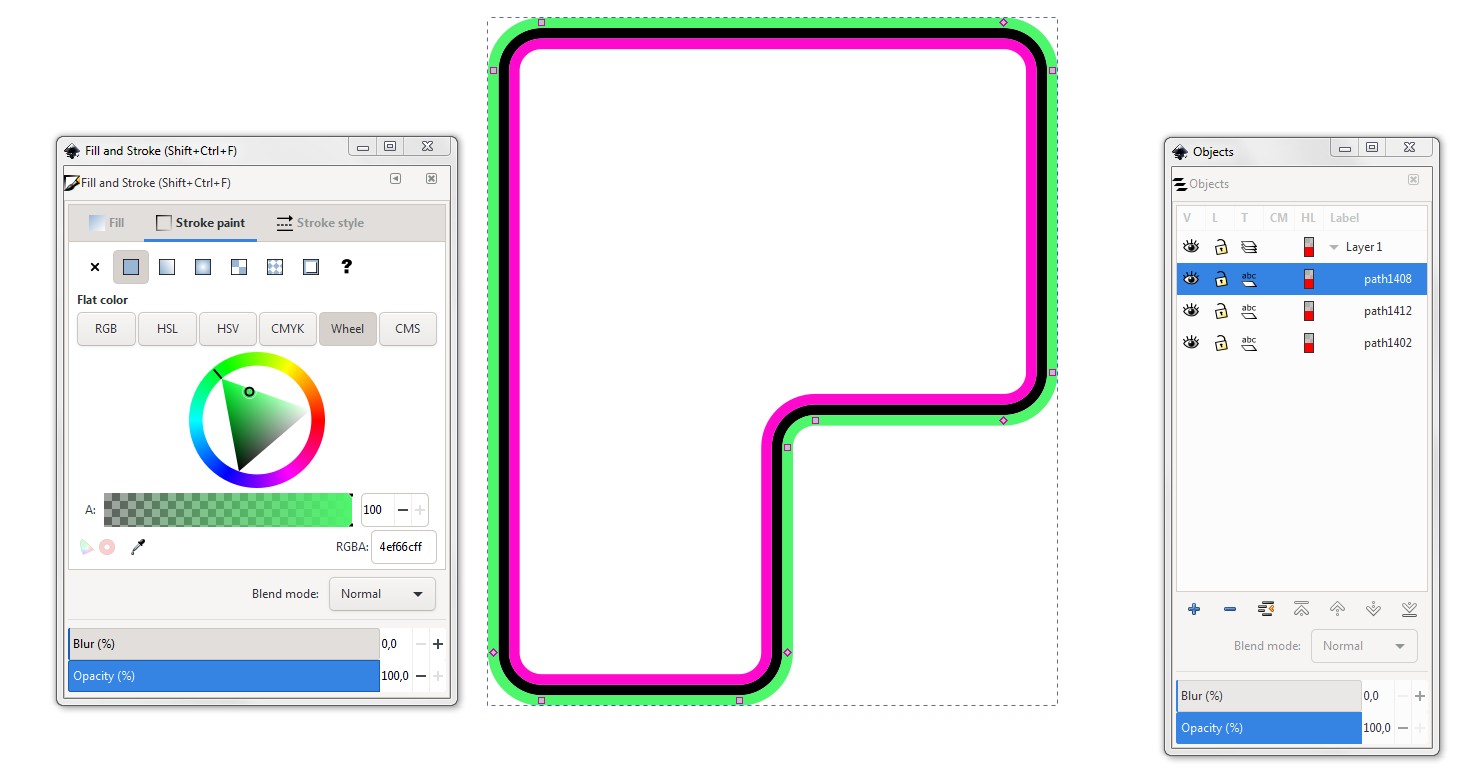 All three curves are now independent single stroke paths with no fill. They can be for ex. splitted with the node tool to make complex colorings possible.

As said, beware moving the curves apart. They are virtually impossible to get back aligned. Making a group helps, but the parts can still be easily selected individually by double clicking or via the Objects panel.

Not the answer you're looking for? Browse other questions tagged inkscape effects or ask your own question.

6
How do I make a 2D texture into a banner/flag that looks like it is folding from a breeze?
0
How to make a clear scribble effect with white color
1
filters don't work on a certain image
2
How can I recreate glowing sparks and lighting effect?
2
How to create this coloured pencil effect?
0
How can I blend the gradient from two rectangles in different directions?
2
How to create a shadow looking sphere and a glass looking spheres?
20
How can I make a hollow effect as seen in the back side of a VW bus?
1
How to create the texture of a rope and a knot on inkscape?
0
S-shaped(ish) Bezier curve control points? (GIMP)