As I was trying to make a t-shirt mockup for my own project, I ran into this problem. First off, I made a selection of the t-shirt and put it in a seperate layer, making the model to have an empty png in the middle.

Then I used alpha channel to extract the shadow of the shirt and put it on top to make it look realistic.

To change the colour of the shirt I created an empty layer called "change colour" inbetween layer 2 and 3. I made a layer mask for the "layer 2" and put that layer mask to "change colour" layer and paint it with any colour (in this case it's light pink)

Now with everything done, here is my result 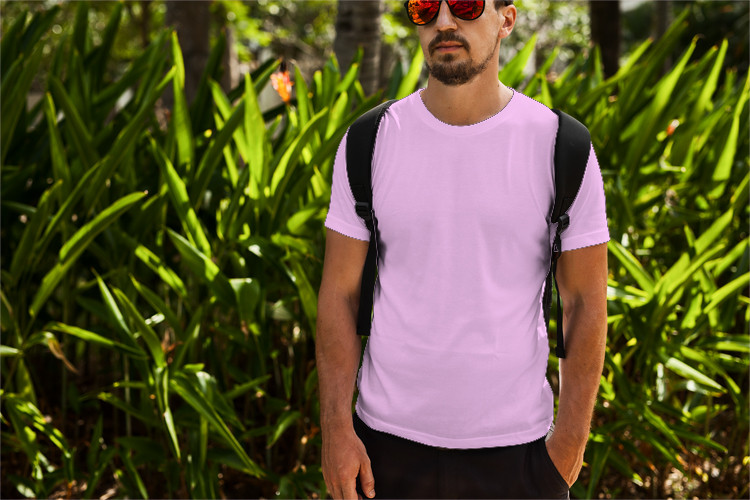 So I'm pretty much happy with how the shirt looks like but if you look closely, it has an annoying jagged line and edges around which makes it looks very unnatural and unrealistic. I've tried everything suggested online from using the pen tool to make a perfect selection to trying to smoothen the edges but none of them seemed to work. What do you guys think may be the problem here and what should I do to improve it? It would be highly appreciated if anyone could help me with this one out using the same technique that I did.

Here's the original image if anyone would like to demonstrate 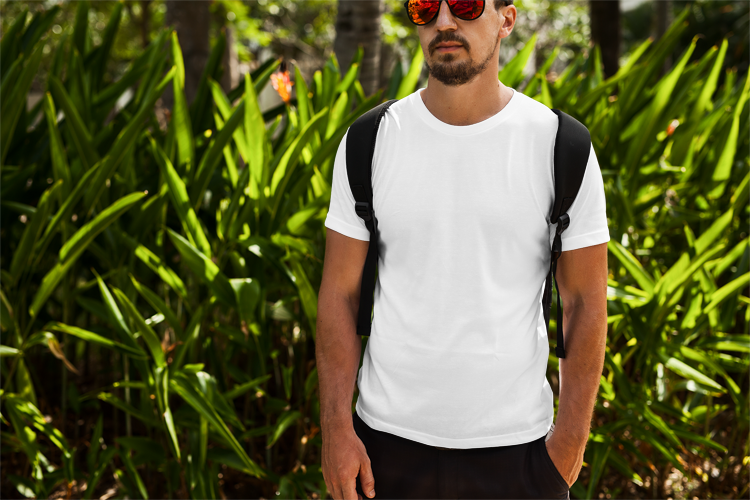 You have too many layers with cut outs and masks. Stacking up multiple cut out edges that butt-up against each other will cause edge conflation artefacts.

Edit requested by OP on how to make this shadow layer, in more detail:

You have destroyed anti-aliasing. In low res images anti-aliasing is essential for apparently non-jaggy images. If you have non-antialiased sharp border in a high resolution image the jaggines cannot be seen in low res displays. The border gets blurred without asking, the jagginess appears only when zoomed in.

If you do not have a high resolution image for the job try properly anti-aliased selection to make the pink area. The anti-aliasing occurs automatically right if you can draw a path selection just in the middle of the anti-alias zone. Feathering a magic wand selection doesn't make it right (tested). With magic wand there's always selected too much or too little.

But you can use the quick selection tool. It's very clever item. You can use it in + or - mode in turns and it seems to learn what you want. Using it in the blue channel gives a good result fastest due the best contrast as you have already noticed. The selection is automatically well anti-aliased.

So, select the shirt in the blue channel with small size quick selection tool and create a new layer. Fill the selection in the new layer with quite dark color and let the layer have blending mode Hard Light. With the color you see clearly the faults in the selection:

There's sharp cusps which aren't selected, so the filled selection doesn't give color to them. You should walk around the selection before any filling and try to fix the selection by using the quick selection tool with small, even 1 px brush size in turns in + and - mode (+Shift, -Alt). I guess it becomes good except sharp cusps. 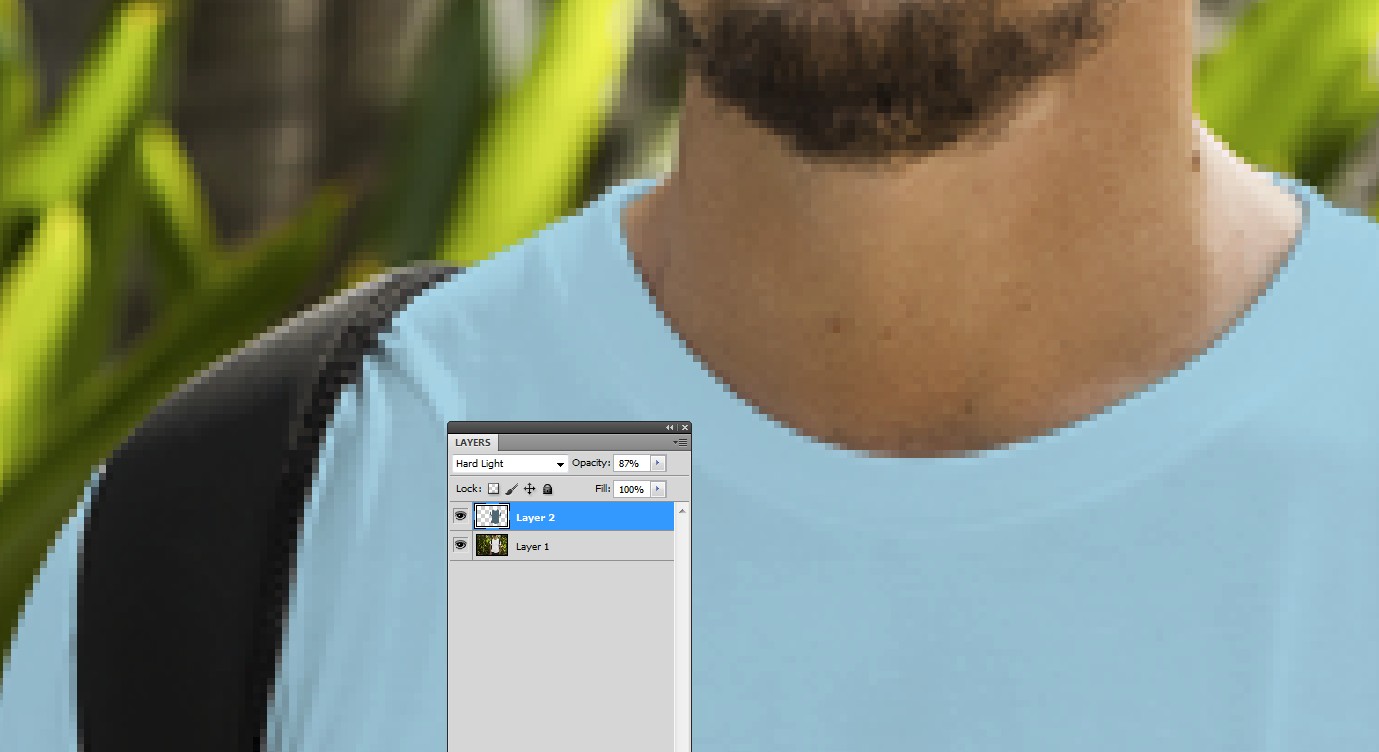 I guess you want to have a solid masked colorization layer for the fill color because that can have also patterns. In addition you want to insert an adjustment layer for ex. to increase the contrast of the details in the shirt: 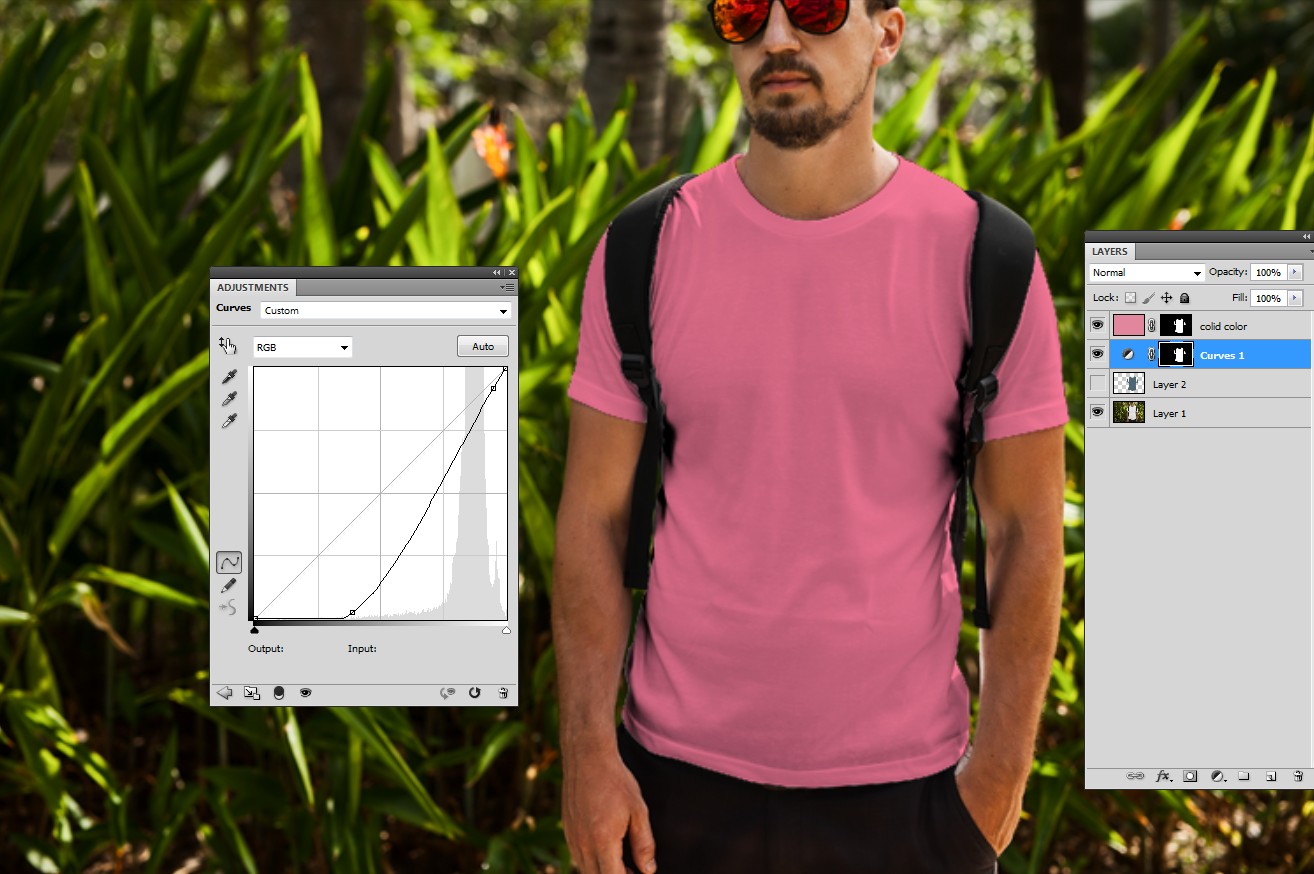 You can use the manually fixed blue layer to make a selection which can be used to create perfect layer masks. Simply Ctrl+Click the layer icon of the previous filled layer in the layers panel. Then create layer masks for the adjustment layer and the colorization layer. I filled a layer with pink for colorization and let that layer have blending mode multiply. The curves layer is used to lift up all wrinkles of the shirt. It must be used carefully because it lifts also up the jagginess.

Not the answer you're looking for? Browse other questions tagged adobe-photoshop mask selections or ask your own question.

0
Inkscape and logo with transparent text?
1
Why is my mask in PS semi transparent?
2
How to make a b&w mask identical with the image in photoshop?
0
Trying to get pattern into specific shape - GIMP
0
I am trying to change the colour of my text with lines inside but cant
0
How to get rid black border around object in Photoshop?
0
How to make perfect/smooth selection
3
Selectively apply feather in Select and Mask