Is it possible to have variable-linked text box change based on document name?

I am working with personalized items for different sports teams. We get a spreadsheet of personalizations needed (like "Bob", "Cheryl", "Best Dad") that need to go in a text box on an illustrator document, with a piece of vector artwork specific to that document. For example, we may get an order that has Dallas Cowboys, Seattle Seahawks, and Florida State University, but each team will have a different name based on what the customer has ordered.

Our filenames are usually the league of the team, team name, and item SKU. So for Seattle Seahawks, it would be something like NFL-SSH-ETCHED.pdf. Is there a way to script it or use variables that would recognize the team name or filename, and insert the personalization into the text field? I've worked with variables on ONE document before, but not across multiple documents with such specific requirements. 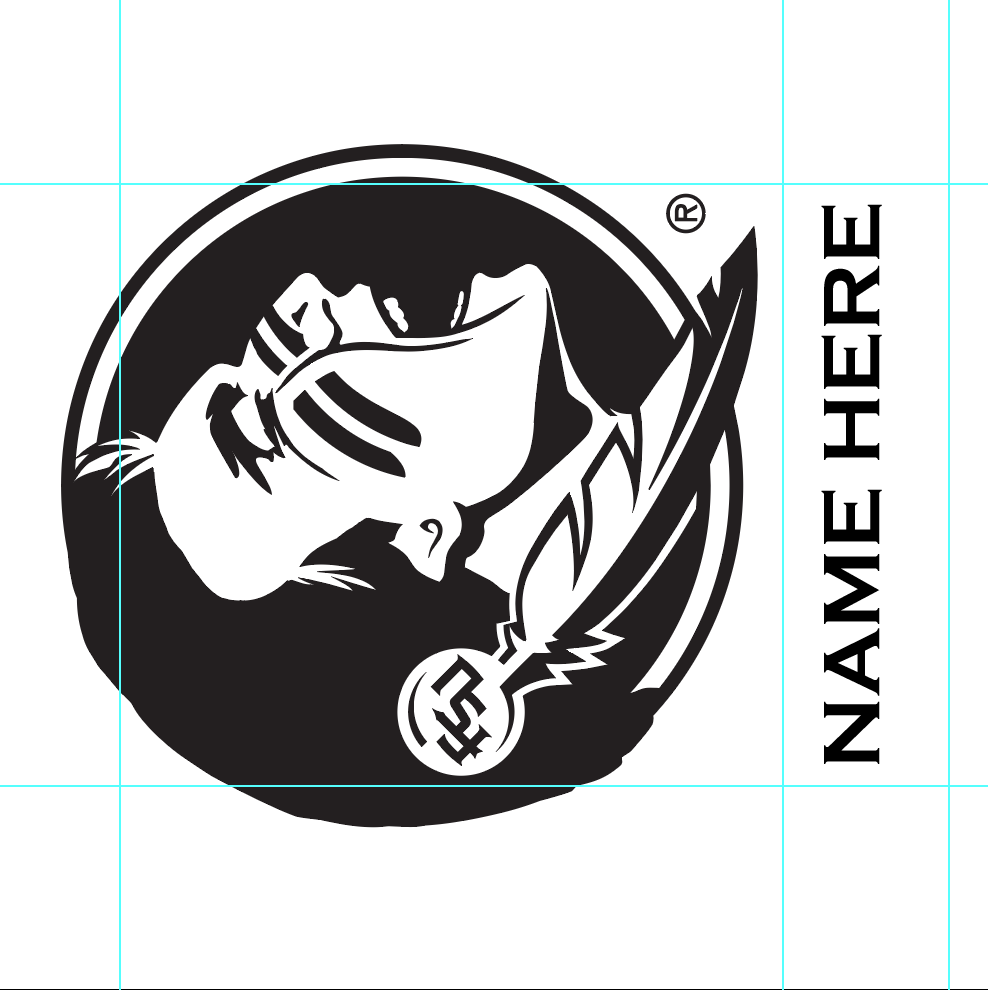 I think I was just as confused as @Scott. Now that I re-read the question, or maybe I really read it for the first time and realized my original answer doesn't answer the question. I thought OP wanted the exported files to be named after the teams :/ I might delete this later, but I'll leave it in for now.

I still don't really understand what you want. What confuses me the most is how you say you want a text variable to change based on a filename. Do you mean the logo file? How does that relate to the custom messages in your spreadsheet. Like if "Name here" is replaced with NFL-SSH-ETCHED.pdf, then enjoy your shirt (or whatever), Mr NFL-SSH-ETCHED.pdf ...Sorry your parents named you that.

The image in the post makes me think what you need is a simple csv file with the custom message and another column with a path to the image file, something like they have in this video, but I just can't wrap my head around your explanation.

If I wanted to change a text variable based on filenames, I'd likely copy files to clipboard and paste that to a spreadsheet application. On a mac pasting files to a text editor will just print out absolute paths to the files. Not sure if that works on Windows. Then I'd use find and replace to replace the path portion with nothing and now I have a spreadsheet with just the filenames that I could import to AI (as show in the video).

It might be easier to batch rename the files afterwards.

How you could do it with Better File Rename

While it does accept csv files as the input, I'm pretty sure it only understands plain text where each filename is in its own line, so you need to make a separate (.csv, .txt) for the renaming with just one column.

I didn't actually export any files from ai, I just made an example csv and forgot to add a header row... 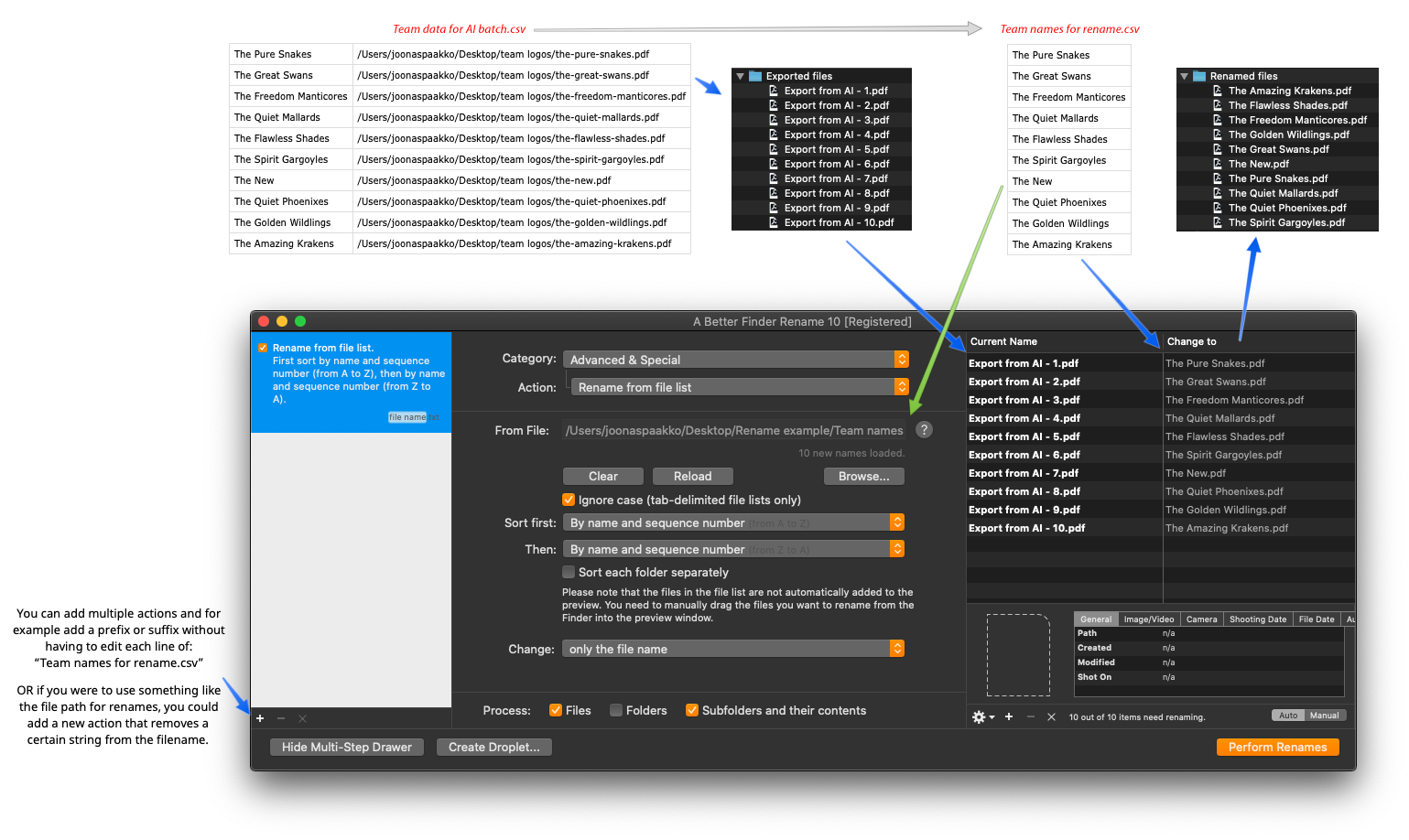 I don't know about Illustrator but.. InDesign has a thing called Live Captions which you can research. It basically pulls file names automatically for images in a document and places that as text boxes based on predefined rules. You can then use GREP to process this text information containing file names. I can't be more specific because the question is not very specific and setting this up can be tricky.

I think this can be done in both Illustrator and InDesign

First you need to setup each variable in an Excel file. Have the names in 1 column, and the image will be in another column. The image column will use a file path that links to where the graphic is for this person. You need to include "@" at the beginning of the image variable. If you already have a list, you can use a formula to make a file path based on the list provided to you.

In Illustrator, start a new document and use File Place to put one of the graphics into the document. Then write your text where you want it.

Open the Variables panel, Import your csv file. Then select the text and apply that to Variable1. Do the same thing with the image.

Open the Actions panel, and create a new action. Then go to File -> Save As, and save the PDF somewhere. End the action.

Select the completed action, and in the advanced options, select Batch.

Make sure the source is Data Sets, choose export location, Override Action "Save" Commands, and choose "File + Data Set Name". Then Click OK. Each variation will be saved as an individual PDF.

TIP: I would make sure each graphic has the same artboard size.

This is not actually a hard problem at all. Its just that your asking is a bit upside down. See what your describing is a automated process hands down a file and you want to leverage another automated process when you open said file, so that you can submit it to some other process.

You could do what you propose its not terribly hard in itself. But illustrator is not a dependency graph or script executor. Its not like a webpage, it has no hooks for putting code into the ai file. So you would have to permanently alter all copies of illustrators that open your files. Its possible but not terribly maintainable and far more headache than you think.

You could do this in indesign but with similarish caveats, but with less alterations. Indesign is totally equal as a vector application so that wouldn't really be a problem. Only one thing to understand is that your deal with adobe says you guarantee you will never use indesign server bound or unatended. Because they are selling indesign server that is just a more expensive indesign that allows you to do this. If you get caught doing this be prepared to pay tens or hunders of thousands or kiss goodbye to all adobe licenses.

Now the easiest way is actually just let the original script make the alteration it isnt really all that hard if you just relinquish the part where you do this once you open the file. Just let the script open the file easy peasy 20 lines of code.

*** I do not work for XMpie, nor do I have any benefit from recommending this, other than as the best solution to help the OP.

If your higher-ups are ok with the cost, probably the easiest way to do this would be to invest in XMpie.

You can use their much more advanced data merge capabilities to write scripting that can pick apart the info in your first column then select the image, and put it in a certain position, add the name, and export.

You can then use that master template to load and export from any CSV fairly quickly once everything is set up. If you get it and post here, I can help you write the script.

If this is what you do all day / everyday, this would be well worth the investment.

Not the answer you're looking for? Browse other questions tagged adobe-illustrator automation illustrator-scripting or ask your own question.

14
Change Background Color of Text Box in Illustrator CS5
5
Illustrator variables / data-driven documents: how to batch-export one file for each data set?
1
Is it possible to create by Applescript a new Illustrator document with other name than Untitled-*?
0
how to automatically generate a text variable for each text box in my illustrator file
3
How to split a text box based on new lines on Sketch?
2
Make text fit textbox in Illustrator [VIDEO]. Must have variable font-size
1
How do I change a color from a swatch library and actually change all the objects that have that color applied in the document?