How to apply a texture to an image, making it look like it's carved into the background's texture? (Example given)

I stumbled upon this map, that has the description of being an aztec tomb:

And what I'm interested in is into knowing how the images were converted to fit into the background, and look like they're actually carved into it, preserving the texture. Those images are icons from the game's weapons, Worms Armageddon, and they look like this:

I've tried searching for tutorials or other examples on the Internet, but I haven't found something that is quite what I'm looking for.
I also tried to contact the map's author, with no luck.

Thanks a lot in advance :)

Check out my quick demo using Bevel & Emboss in the layer styles. Assuming you have larger assets, you can break up your shapes into multiple layers and apply the layer style to each of them for more depth/detail.

A thing to note: in the layers palette I have my fill set to 0. This keeps my layer styles visible, but hides the actual asset, since all we want is its shape. I find bevel & emboss works best when it is subtle. Too strong and it looks fake.

You can see my result in the red box, using very crude selections and that tiny sprite, it looks pretty similar to the source. 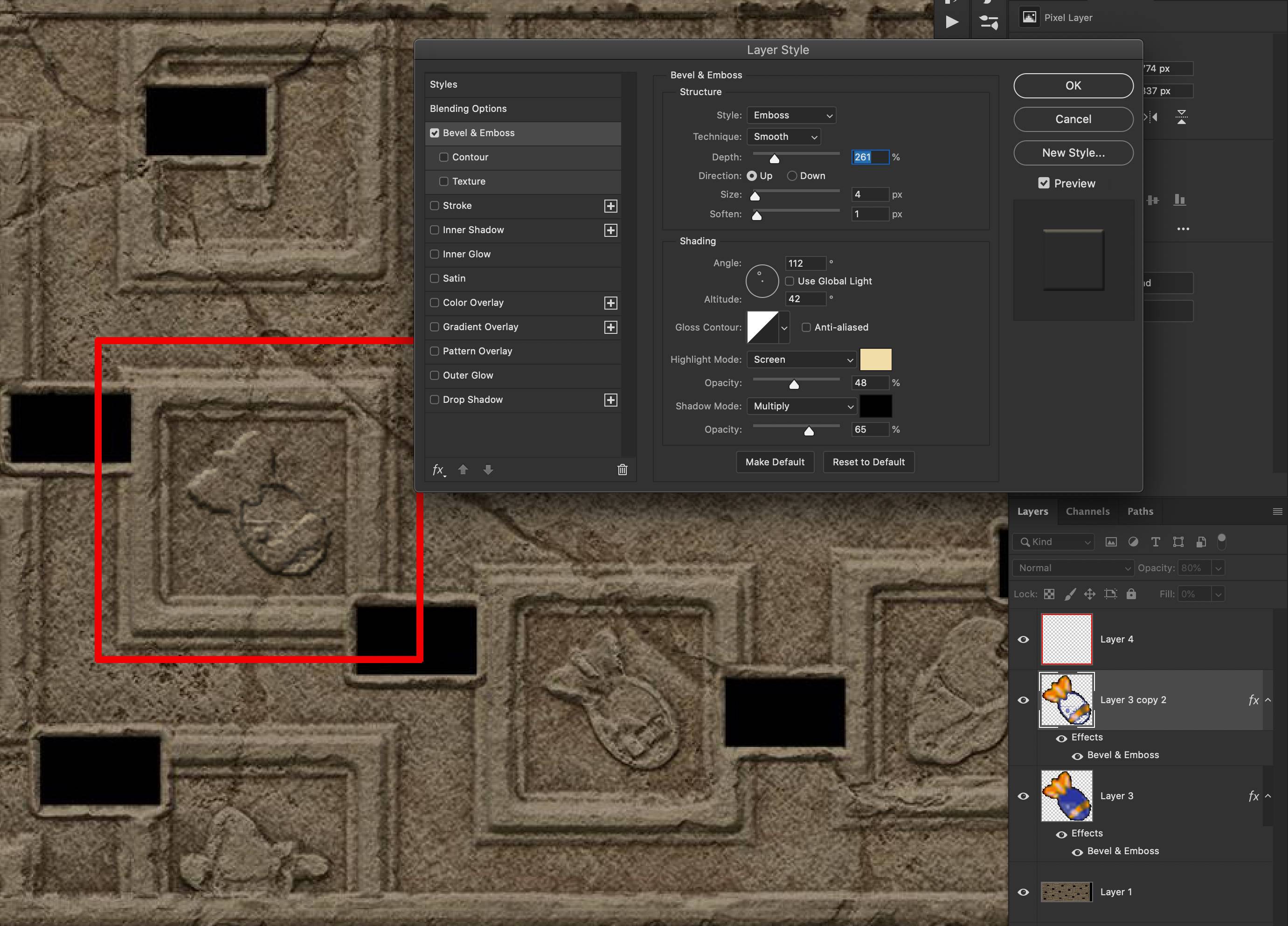 keith rodrikeith rodri
14144 bronze badges
New contributor
keith rodri is a new contributor to this site. Take care in asking for clarification, commenting, and answering. Check out our Code of Conduct.
add a comment  |
4

This was actually not asked, but I inserted it for GIMP users. I have also in the end something to Photoshop Users.

In GIMP filter "Bump Map" does the job. 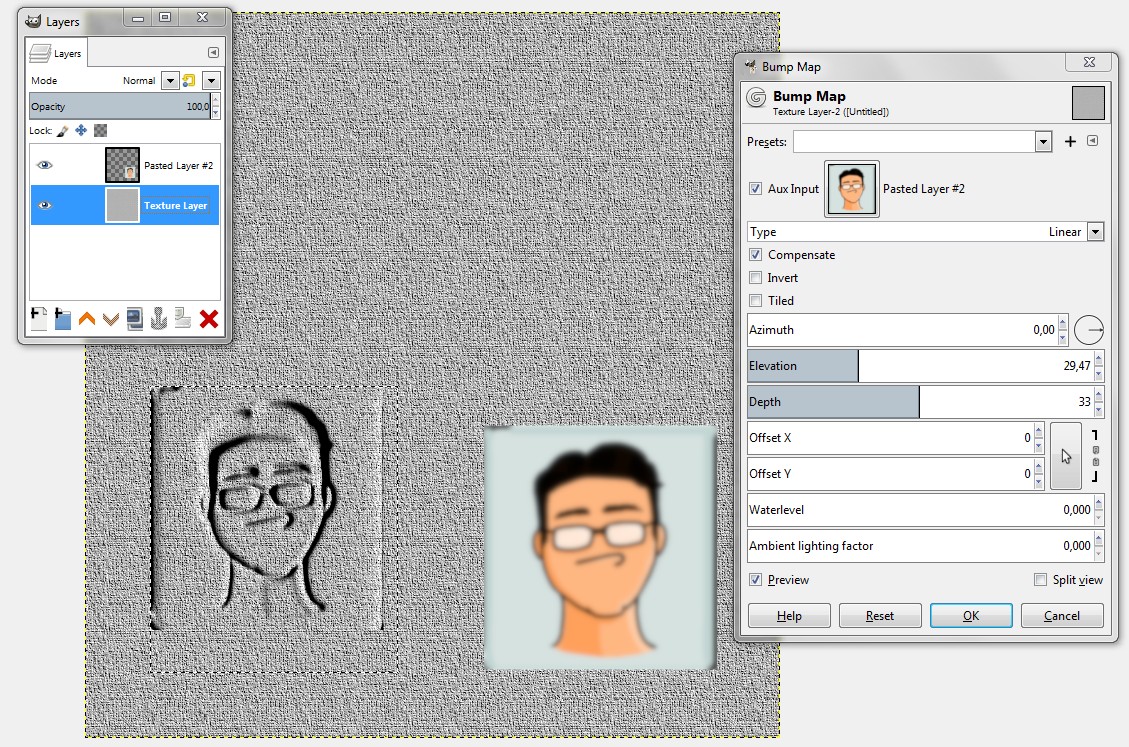 In the bottom layer I have a random texture. On the top I have the wanted bump map image. It's a little blurred to create well visible slopes(See NOTE1)

I made to the texture layer a selection for the wanted affected area. No selection actually is needed if you set X and Y offsets in the dialog.

I applied to the selection Filter > Map > Bump Map and selected my top layer to be the Aux Input of the map.

NOTE1: The brightness sets the relative elevation. The apparent 3D view is straight on the face, so a gradient is needed to have visible slopes. A light blur works well.

The next is an alternative version of "Embossing". The core idea is shown already by user keith rodi in his answer, but this version doesn't use layer styles, so it can be used directly in GIMP and many other image editors. I tried it in Photoshop.

Here's again a random texture in the bottom layer, but the top layer has a BW version of the wanted embossing shape. It is adjusted with Image > Adjustments > Black and White so that all wanted details can be seen as different greyshades:

The next step is to apply Filter > Stylize > Emboss for the fake 3D shading.

Adjust depth % so that the scale covers range black to white. We can adjust it later. The height cannot be adjusted later, so it must be got right now.

With blending mode Hard Light the embossing affects to the underlying layer. Reduce the opacity and possibly adjust the contrast of the embossing layer to avoid too bright and too dark areas and to lift up too subtle borders. 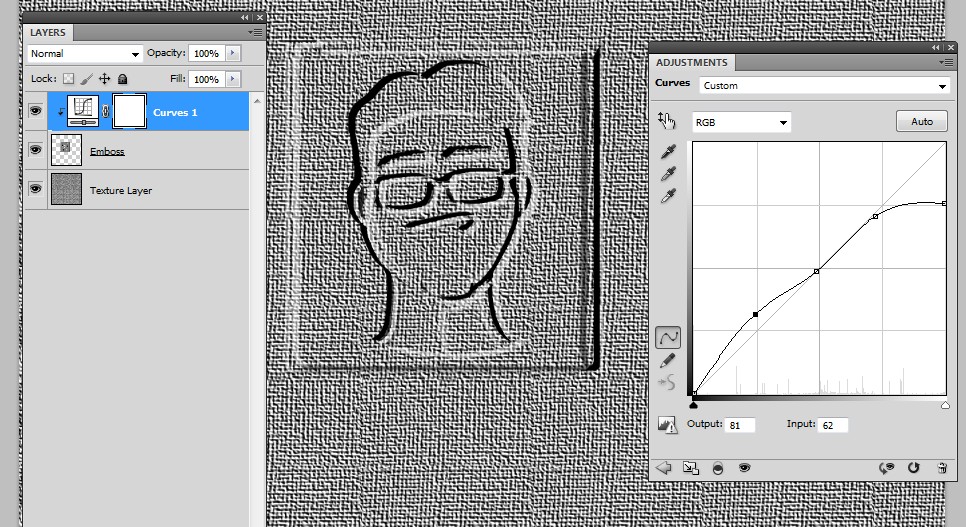 Here the contrast is adjusted with a curves layer (next layer only switch = ON), but Image > Adjustments > Curves works well, too. The blending mode of the Emboss layer is Hard Light but the opacity is and can well be =100% due the reduced white.

As already shown by user keith rodi, the embossing with Layer Style Bevel&Emboss works and offers a kind of adjustability which is lost with filter "Emboss" except in case one uses smart filters.

Conclusion: Bump Map and Embossing are totally different ideas. Bump map needs gradients (or blur) to generate well visible forms. It is a kind of partially implemented 3D. Embossing generates shadows caused by imagined vertical surfaces and to the light side edges it generates highlights as physically impossible anti-shadows.

ADD: Keith rodi's version could be enhanced greatly by having a layer mask for the embossing shape. The layer mask defines as transparency the edges for effect Bevel&Emboss. The actual layer can have any color because the fill=0%. One can paste an image to the layer mask after Alt+Clicking the mask icon in the layers panel.

In the next screenshot the used embossing shape is shown in the bottom right and it's pasted to the layer mask as is. 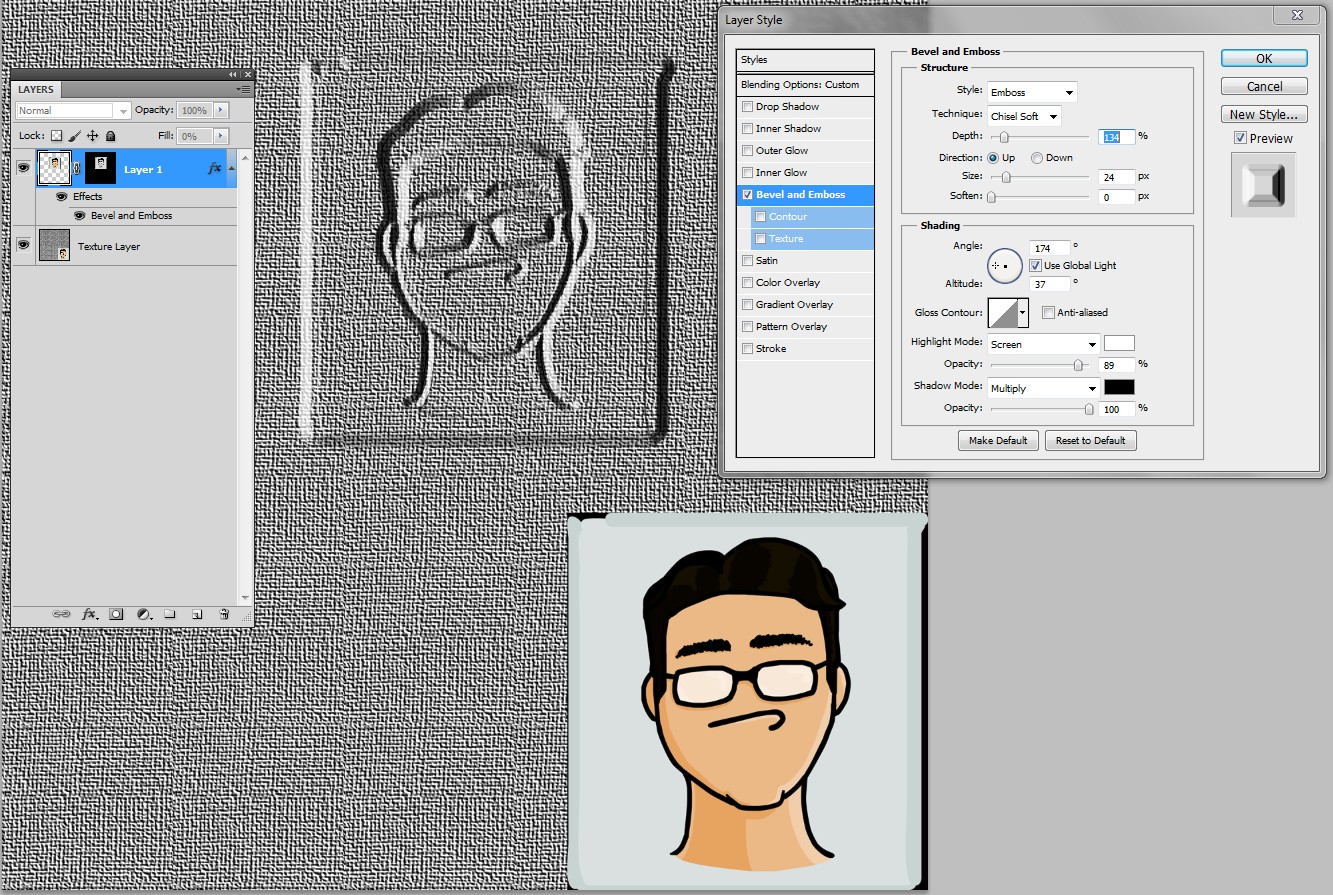 Not the answer you're looking for? Browse other questions tagged adobe-photoshop texture borders or ask your own question.

3
How to apply a texture to the background
2
How to make an image look like it's been printed
1
How to apply a dusty texture on a photo?
0
Mockups Pixelate Image
9
Making a curved road texture in Photoshop?
0
Correct low contrast effect in Photoshop CC
0
Gimp: making sunken relief lettering (gold) on textured surface
2
What are some techniques for designing realistic-looking planets and moons?