I have vector image which does not print well, unless I rasterize it. Image created in Inkscape. I have tried to save it as PDF and print using Acrobat Reader DC, also to print it directly in Inkscape. The solution I found - to print it rasterized: File > Print -> in Rendering tab checked Bitmap and set DPI to 600. However result is not as sharp as printed vector image (I have also other components in the image, which prints properly not rasterized). Also I tried to create PDF in AI, however printing produces another distorted result. See pictures below (first rasterized, second Inkscape and third AI). PDF in Acrobat Reader itself looks as expected in both versions.

I am wondering if it is an issue with printer or image is too complex to print it properly. Link to PDF created in Inkscape. Printer I am using CLP-365. Toner saving is off.

I downloaded the PDF, opened in Illustrator CS6, printed to my monochrome laser printer (which has a Postscript level 3 RIP). -- Looks as expected.

At the size you are trying to print, the detail is so small it merely gets plugged up. You're asking an end use printer to maintain a collection of hairlines below 0.25pts. In most instances, that is simply not going to happen.

Once the vector art is enlarged, you can actually see the detail in a print. 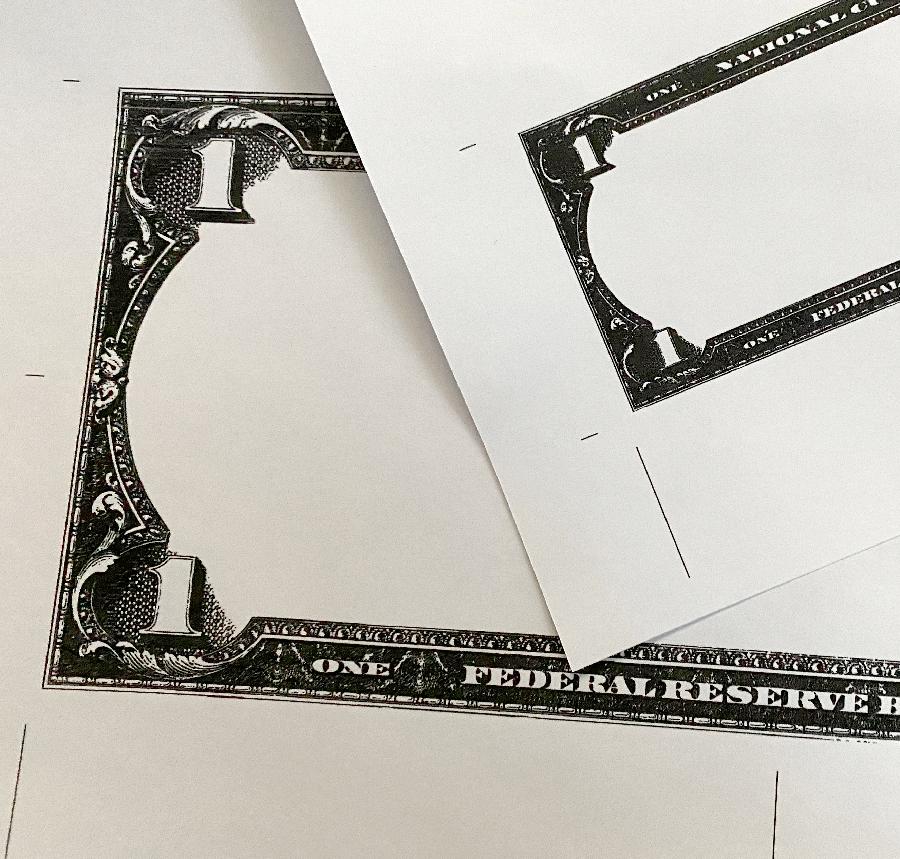 Same printer. All I did was enlarge the art roughly 200% in Illustrator before printing.

US currency is purposefully constructed of these fine engravings just for this reason -- to make them harder to reproduce on basic equipment. Then reducing these engravings to 25% or less is merely asking for things to get plugged. US currency detail is hard enough to maintain at 100%, let alone 25%. This is why most "fake" or "novelty" notes are simplified to a degree.

In short, the problem you are facing is not the printer, file format, or software in use.
The problem is the artwork itself.

Related: How can I legally design something which looks like US currency notes?

Not the answer you're looking for? Browse other questions tagged inkscape print-design pdf or ask your own question.

19
How can I legally design something which looks like US currency notes?

0
Printing from InDesign has correct margins, but not from Acrobat using exported PDF
1
How to print to PDF on Mac OS X from Adobe InDesign CS6?
2
Print from acrobat pdf - print true cmyk values
8
PDF from InDesign looks correct but prints bounding boxes around effects and transparencies on SOME printers
1
InDesign: What's causing only certain letters to print incorrectly?
2
Is it possible to export PowerPoint presentations to PDF with vector graphics preserved?
3
SVG / PDF image without interpolation?
0
Font not displaying properly despite being embedded