How can I connect in Illustrator two circle's tangent with another curve (or circle section)?

I am trying to connect these two circles in purple with curves (in red) with some kind of an arc but i just can't find a way of doing this perfectly, with accuracy and without a plugin, i just can try to fit them as good as i can but i need these connections to be super precise and snapped if possible. Thanks a lot!: 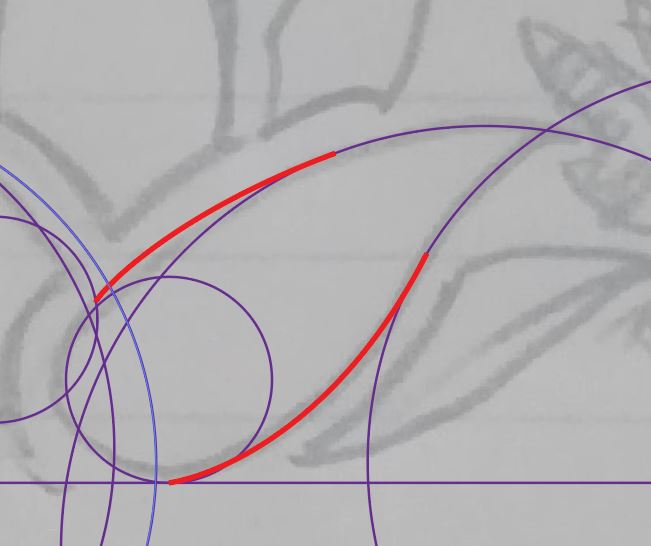 ADD: The simplest workaround in Illustrator is at the end of this answer. Jump directly to it if you do not like elementary geometry nor methods which are either non-exact or need extra software.

There's an infinite number of possible curves which are tangential with 2 given circles, Actually there exists an infinite number of possible circle arcs which fit. Let's construct one of them. Let R (red) and B (blue) be the given circles and G (green) be a circle which should be moved to be tangential with R and B. In the next image the dashed green circle is drawn to the approximated final place of G: 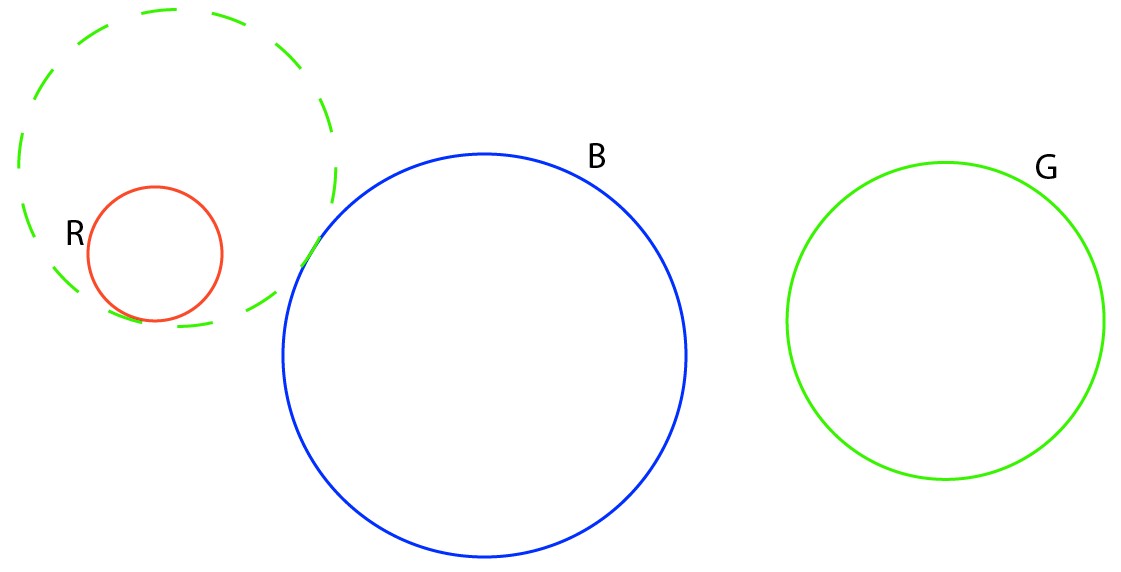 The radius of G must be long enough, but otherwise it's arbitary.

The dashed circle is placed by eye and one can easily see the place is not exactly OK.

Proper placement in advanced CAD software would be found by setting tangency constraints and the program would move G to the right place. Ideally you could set the starting point of the tangent arc on one circle and play with the place where the arc meets the other circle. The radius would adapt.

That functionality isn't available in Illustrator without CAD style extensions. We solve the case with elementary geometry.

Start by moving G so that it's tangential with R in the bottom node. It will snap exactly if Smart Guides and Snap to Point are ON, no other snaps! Select G and drag the bottom node with the white arrow: 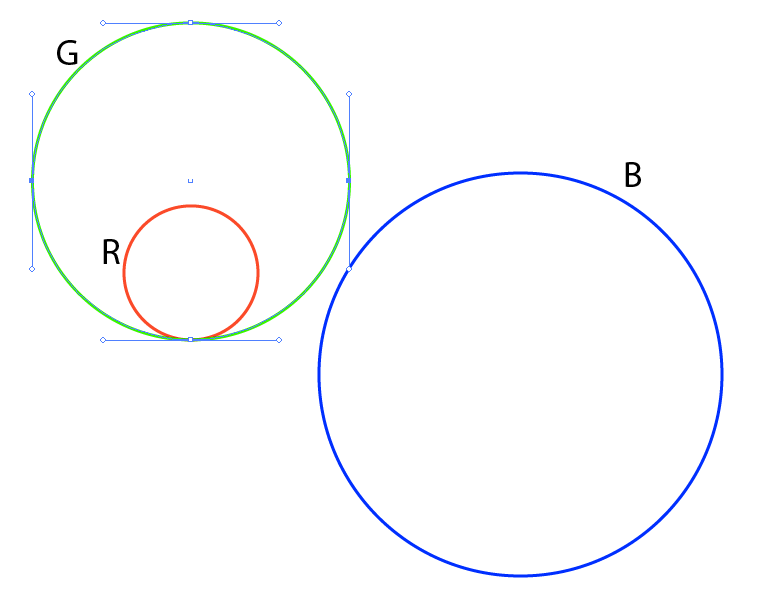 You see that the right placement of G can be achieved by rotating G around the center of R. But making it snap needs some auxiliary drawings. Rotate tool alone wouldn't do the trick. Let's draw horizontal radiuses to circles B and G. We can construct the auxiliary drawings with them: 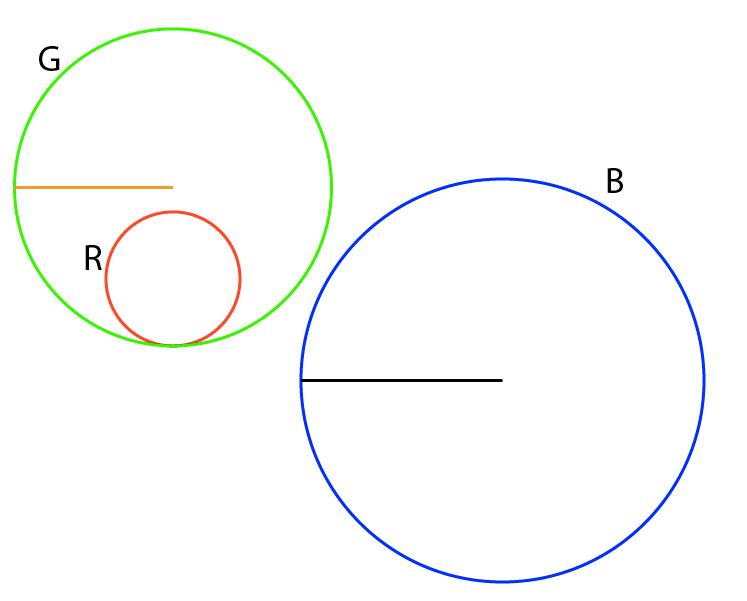 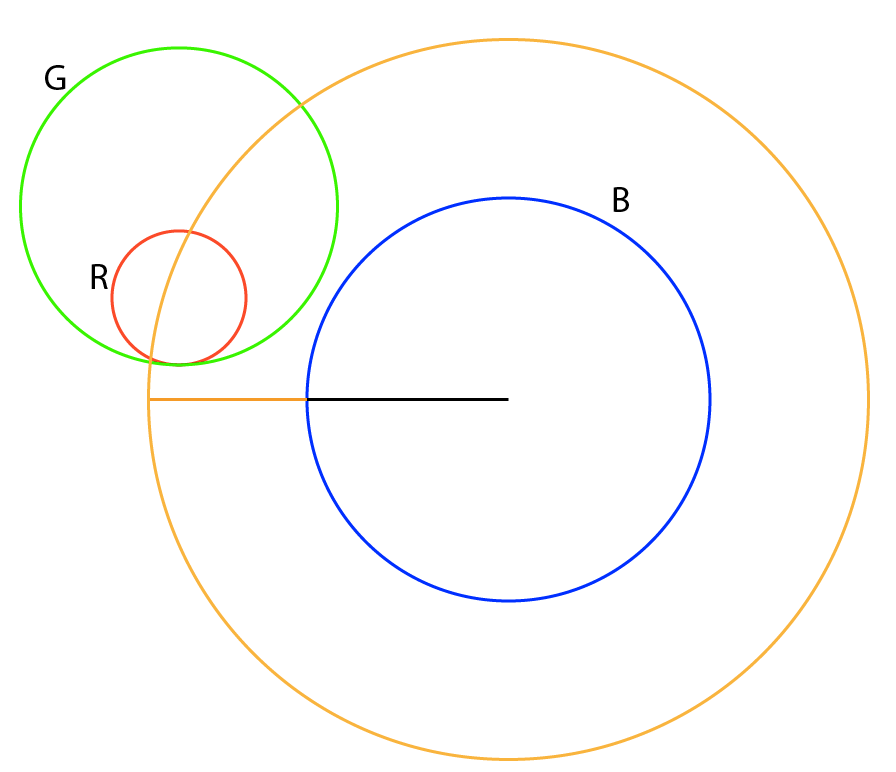 The center of G should be on the orange circle. But another circle is still needed oget a crossing for proper snap.The other auxiliary circle is at the center of R and it's radius is the difference of the radiuses of R and G. 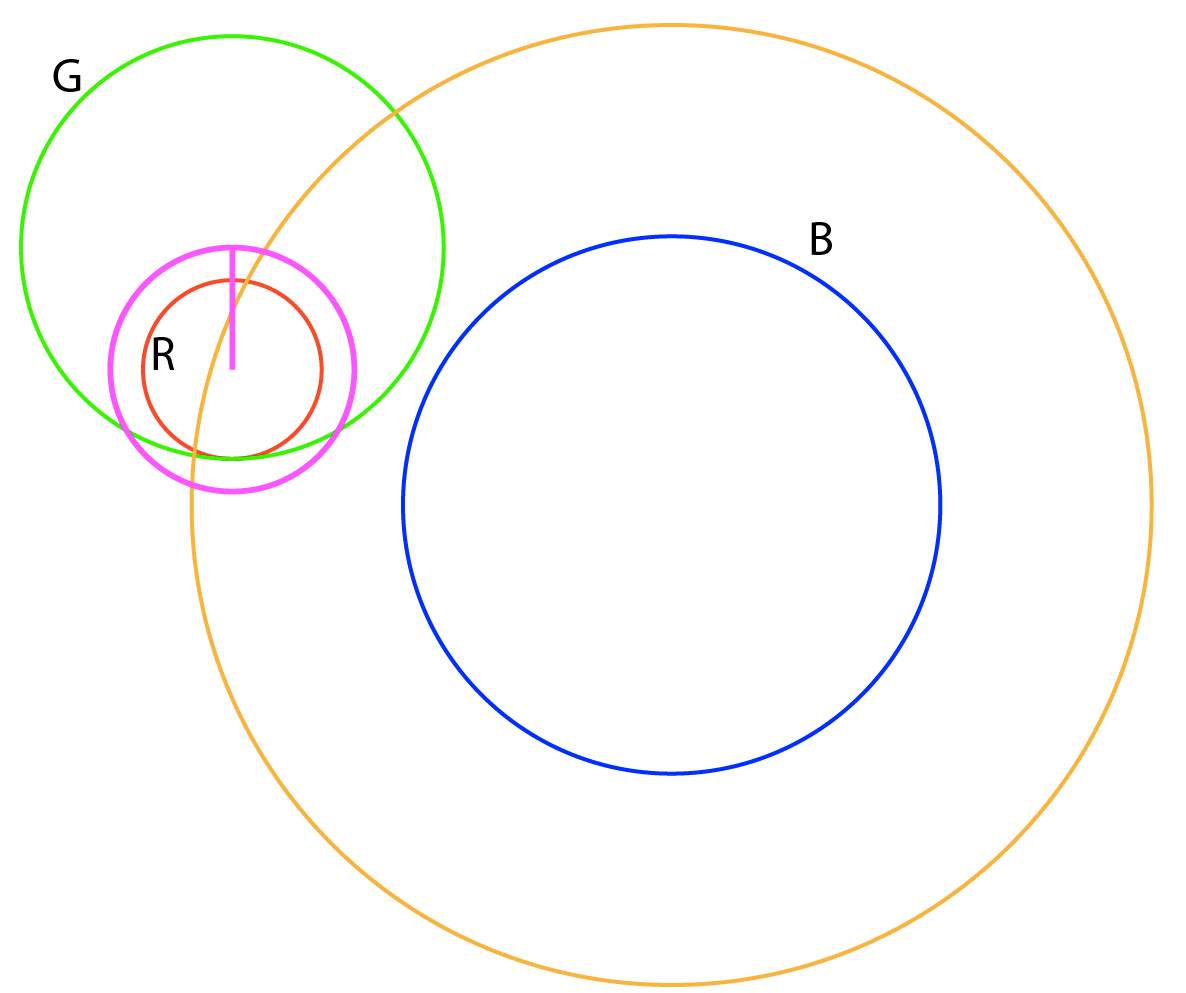 The magenta line is technically unnecessary, but it can help when drawing the circle due the numerous snap candidates which can cause easily errors .

The next step is to select G and rotate it with the rotate tool around the center of R. Set the rotation center and drag the center of G to the crossing of the magenta and orange circles: 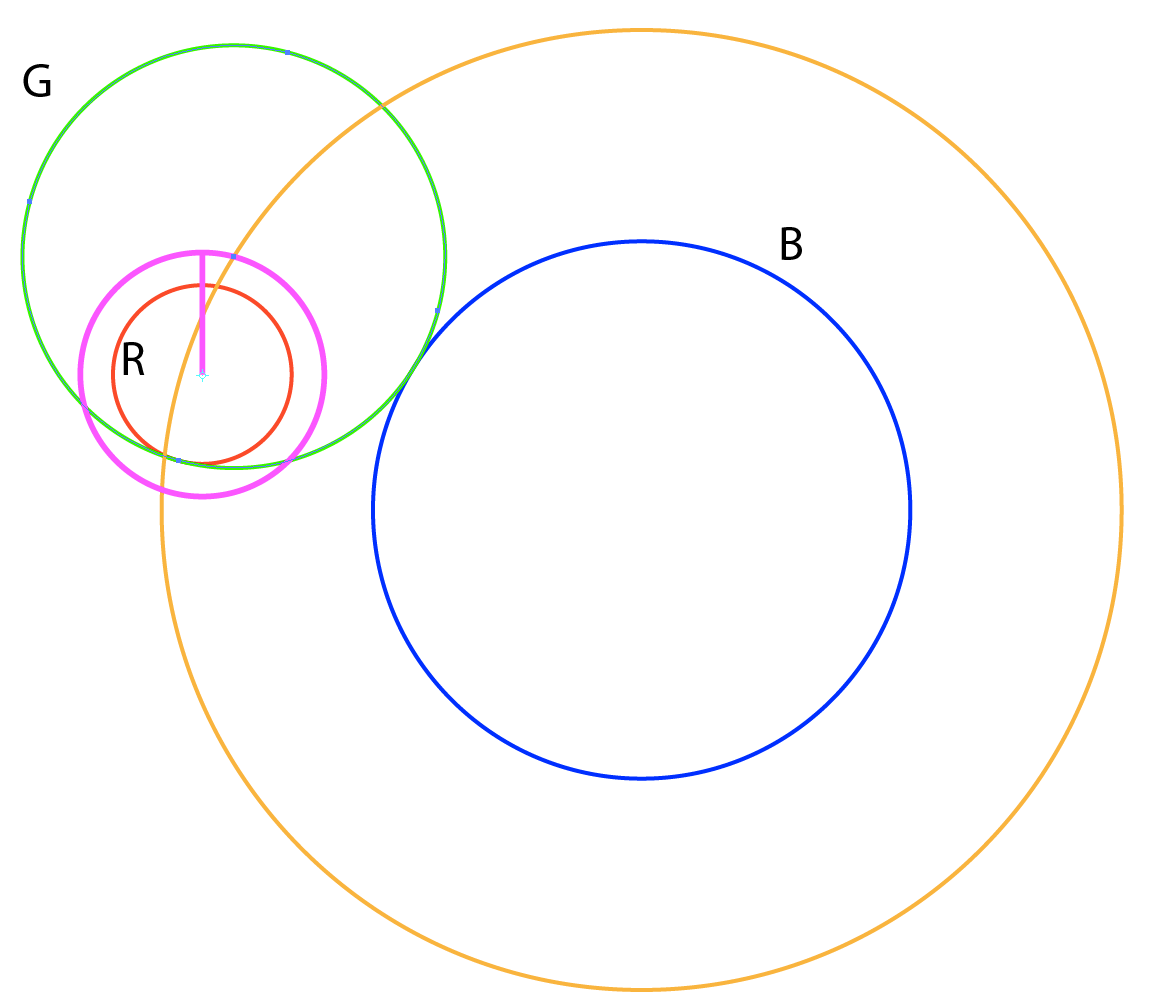 You can insert a new node to the green circle at the crossing. It can be used to delete the unnecessary part of the G.

This solution is not practical, it's more like elementary math exercise. An advanced CAD style plugin or a CAD program would be handy. As well one could eyeball the shapes with high zoom in.

If the curve can be arbitary you draw a tangential Bezier curve with 2 clicks and drags with the Pen tool. You must again eyeball the handle if you are going to be fast.

As said, with a CAD plugin the process would be easy and fast. I don't have such software, but we can try it in a CAD program. This CAD is freeware which unfortunately doesn't have tangential arcs, only tangent lines.

At first draw 2 tangent lines to your circles with the "draw tangent" tool: 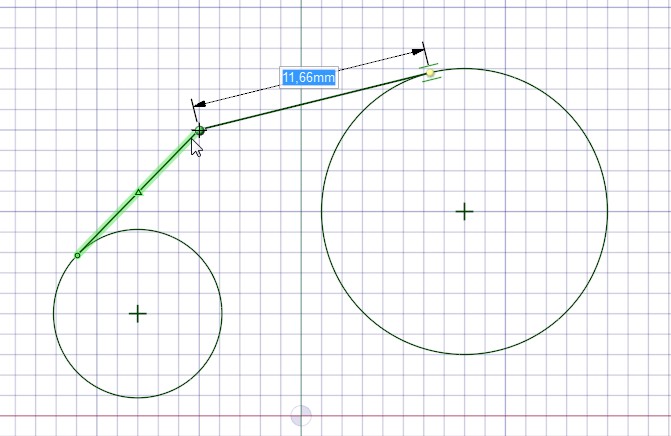 In theory a single common tangent line exists but it's possible it doesn't meet the circles in the artistically wanted place. 2 tangents give some room. The corner must be rounded: 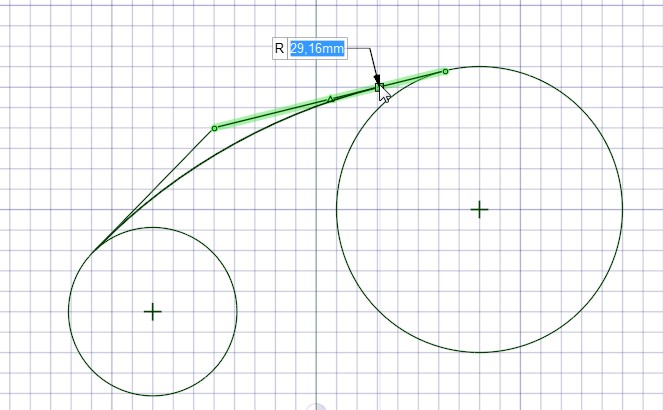 The result is a circular arc which has a piece of line at the other end: 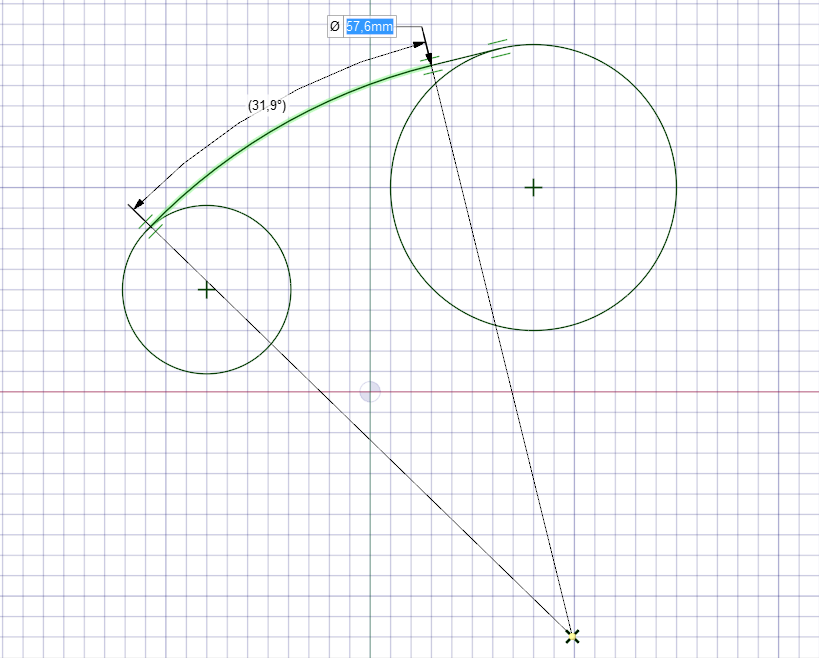 Mathematicians would say "it's not the smoothest possible, it's curvature has a step in the joint of the line and the arc". But it can be visually good enough.

In illustrator without extension plugins you can draw the tangents as 90 degrees rotated radiuses, only move them and scale the length. Split off the extras, join the lines and round the corner - all with Illustrator's own tools: 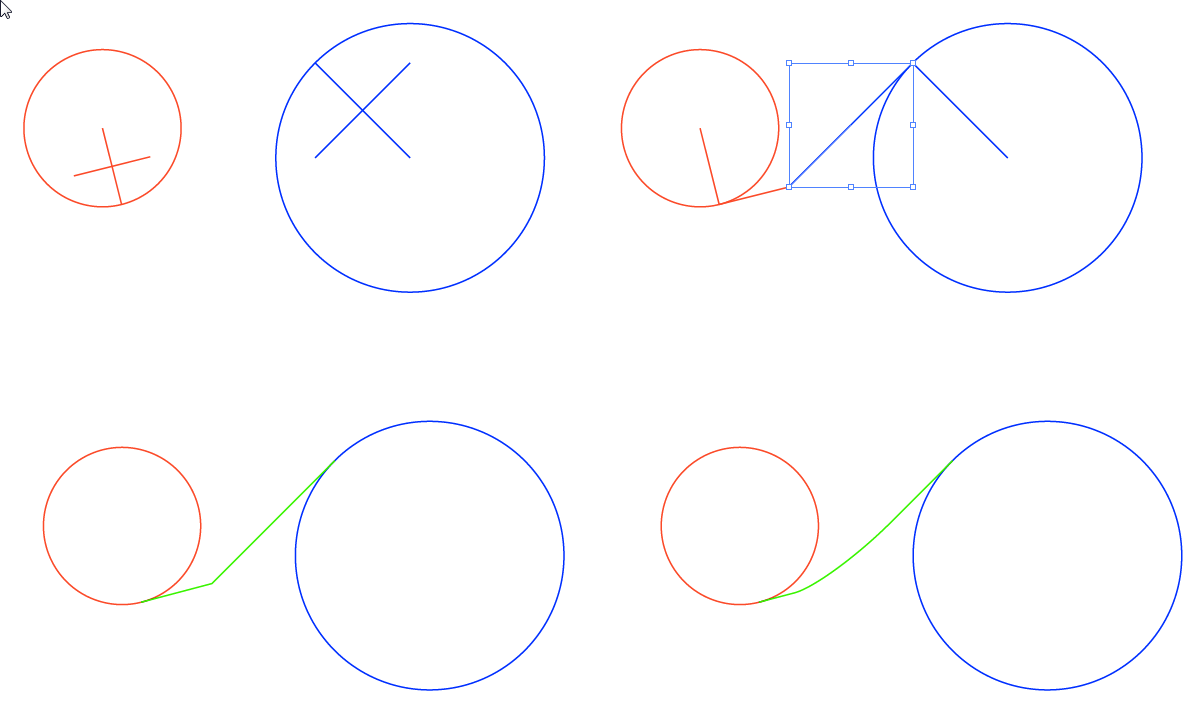 Not the answer you're looking for? Browse other questions tagged adobe-illustrator logo path shapes or ask your own question.

7
How can I create perfect "radio waves" (concentric arcs of a circle)?
2
How to equalize any 2-point curve in illustrator
2
How to rotate and snap an object into a desired position? [Illustrator]
1
Connecting joints in illustrator (polygon and triangle)
0
How to fill a shape with symbols in Adobe Illustrator?
0
Illustrator: How to make a precise circular arc with ratio and length
1
Illustrator/Inkscape : doing perfect connected waves in one path
8
AI positioning circles within an arc at equal distances and heights
0
Constructing a basic shield from primary shapes
6
alignment issues with logo design