How to use the minor axis to draw an ellipse in perspective?

In How to Draw by Scott Robertson, they say that to draw an ellipse within a plane, you find the minor axis by drawing the line perpendicular to the plane. You do this by using another vanishing point and drawing through the plane's center point.

The problem is that when I draw an ellipse that touches all four points, I can't seem to get the minor axis to cross the plane's center like in the book. Does this only work when the plane is a perfect square? How do you draw an ellipse in a non-square plane? Also, won't the minor axis change depending on where the second vanishing point is? When I use other vanishing points the ellipse doesn't look right.

I'm confused about how to draw ellipses in perspective. Is there a big difference between this method of simply dividing the plane several times to know where the ellipse should be?

In case your ellipse should be a perspective image of a circle on a square the question is valid. See NOTE1 and read my story to learn how the "Chord method" works.

The useful story would tell how one could construct a consistent cube if the horizon line and the perspective image of a circle on one of the faces is given. The story is a kind of advanced eyeballing for practical drawing on paper, it's not exact math. It doesn't start from the measures of the cube and imaging parameters, it starts from the horizon line and one ellipse.

In the next image we have the blue horizon line and an ellipse which presents a circle on one face of a cube. For simplicity we assume that the ellipse is actually a circle on a vertical face. In addition we assume 2 point perspective is good enough, so vertical lines are imaged as vertical:

As already said we assume the ellipse is on a vertical face of the cube and we use 2 point perspective. The next image has the great eyeballing part:

The green lines are nothing special. They are all vertical lines (as we assumed vertical lines can be drawn as vertical lines) One goes through the midpoint of the ellipse and the other two are tangent lines. The great trick is to find the other vanishing point. We draw from an arbitary point A of the ellipse curve a straight line towards the horizon line so that the half segments ABD and CBD look visually as big. The line meets the horizon line at the wanted vanishing point U.

In drawing guidance texts this is the "Chord Method". The chord is the line AC.

Now we can draw a part of the edges of the face squares from the vanishing points and crossings:

The black lines are eyeballed tangents from U and the orange lines are drawn from V to the crossings.

We need still 2 lines to get a cube. One possibility is to use again an ellipse. We can eyeball one with vertical minor axis. It's the image of the circle inside the horizontal top square:

An eyeballed tangent from U and a vertical line from the crossing completes the cube.

I guess eyeballing sounds bad. I used Illustrator which should have precise snapping and I didn't utilize it except in the crossings. But: Chord method is designed for persons who draw with pen and paper. Some of them can also have a ruler and an ellipse drawing tool.

NOTE1: Chord method can also be used reversely to decide the lengths of the of the axles of the right ellipse (which is the image of a circle) if the vanishing points are already given.

You can find a longer description of the chord method from here: https://www.idsa.org/sites/default/files/2002_Randy%20Bartlett.pdf

Beware the "from math taken" but exact convention to define the direction of the planar surfaces by the directions of the surface normals. There the floor of an usual house is vertical and the walls are horizontal.

NOTE2: There are later comments which say that this rule is not a general perspective imaging fact. I do not know enough of perspective imaging math to say how accurate the rule is. So, take it as a practical way to find one of the possible images of possible fitting cubes, that one which produces an even looking result.

On the point of the minor axis changing depending on where the vanishing point is placed, I have learned that the minor axis ellipse technique only works for perfect circles in perspective. So if the ellipse does not fit into the rectangle, it is because the rectangle is not a perfect square. When you move two vanishing points together, it changes the FOV and therefore changes what a perfect square looks like in perspective, which in turn changes the minor axis of your ellipse.

You are right, and Scott Robertson is wrong. It is a very common misconception that the minor axis always lies along the "axle" perpendicular to the plane of the ellipse. (And just because he repeats it in capital letters in his book, that doesn't make it true!) Incidentally, Marshall Vandruff similarly gets it wrong in his 1994 course, although he has excellent advice overall. The "Chord Method" posted by @user287001 in the other answer is also wrong. The only reason it appears to work in that case is that the objects in question are photographed in the centre of vision.

The "axle" principle should be considered more of a rule of thumb, and it's actually a pretty good approximation when the object is within the cone of vision. In the example you gave, note that there's some significant distortion happening because you're outside the cone of vision, and this shows exactly where the rule of thumb no longer applies.

Here's a picture taken from Wikipedia's article on Columns: 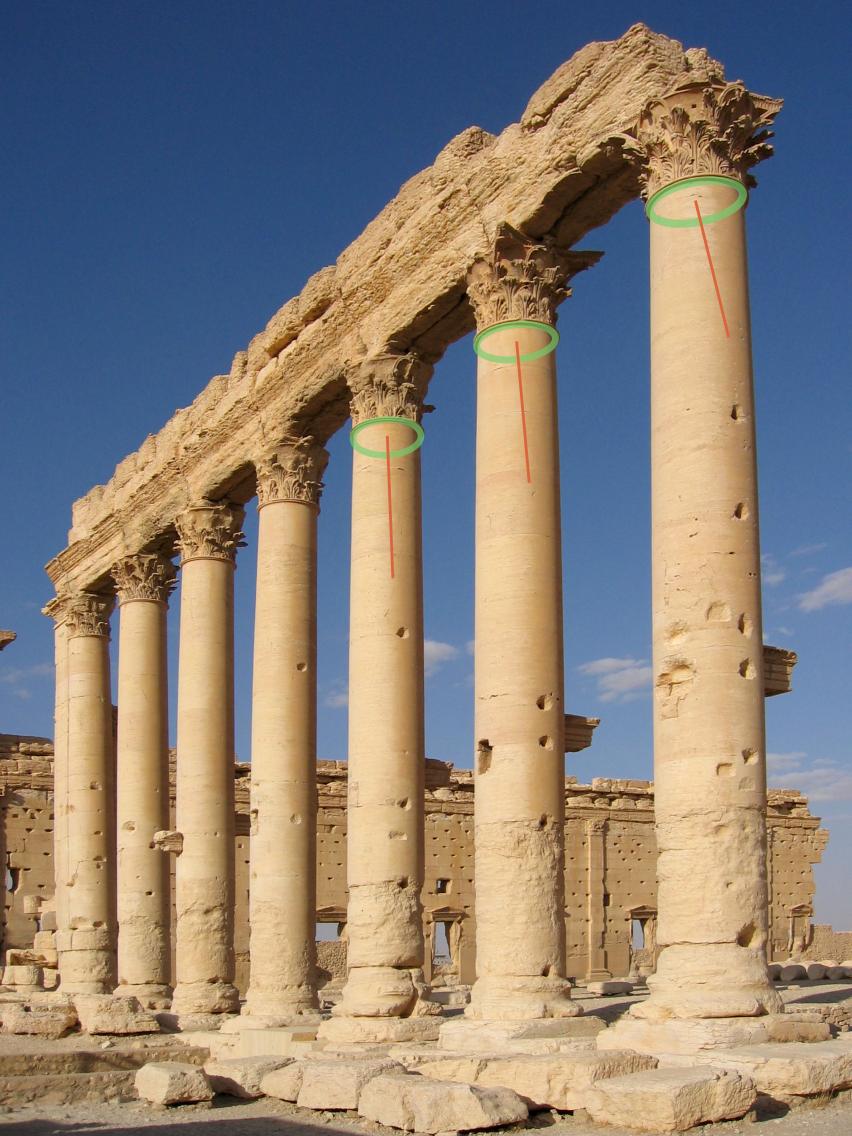 I've overlaid perspective circles on the tops of the columns; according to the "rule", the minor axes of the ellipses should be pointing straight down along the length of the columns, but they clearly do not. Note that the ellipses on the left side of the photo, being closer to the centre of vision, do point downward.