hi guys im looking to make a similar texture seen in the youtube thumbnails of "Our changing Climates"'s youtube chanel. if you could help provide information on what the texture is, how to make it or provide me with a sample that would be a great help. 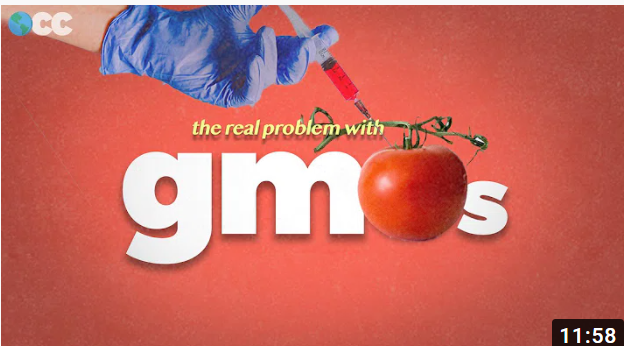 The texture isn't uniform or some kind of repeating pattern, so it's probably not something created in Photoshop from scratch. It looks like they probably used a photo of an actual texture, perhaps some kind of paper texture like this. If you want to make your own to avoid the cost of purchasing one or any copyright infringement problems, then take a photo of a texture you like, and convert it to black and white.

Here's an example using the texture in Photoshop. I have a background with a simple radial gradient. Colours were sampled from your example image. The B&W texture is on a layer above with the blending mode set to Overlay. 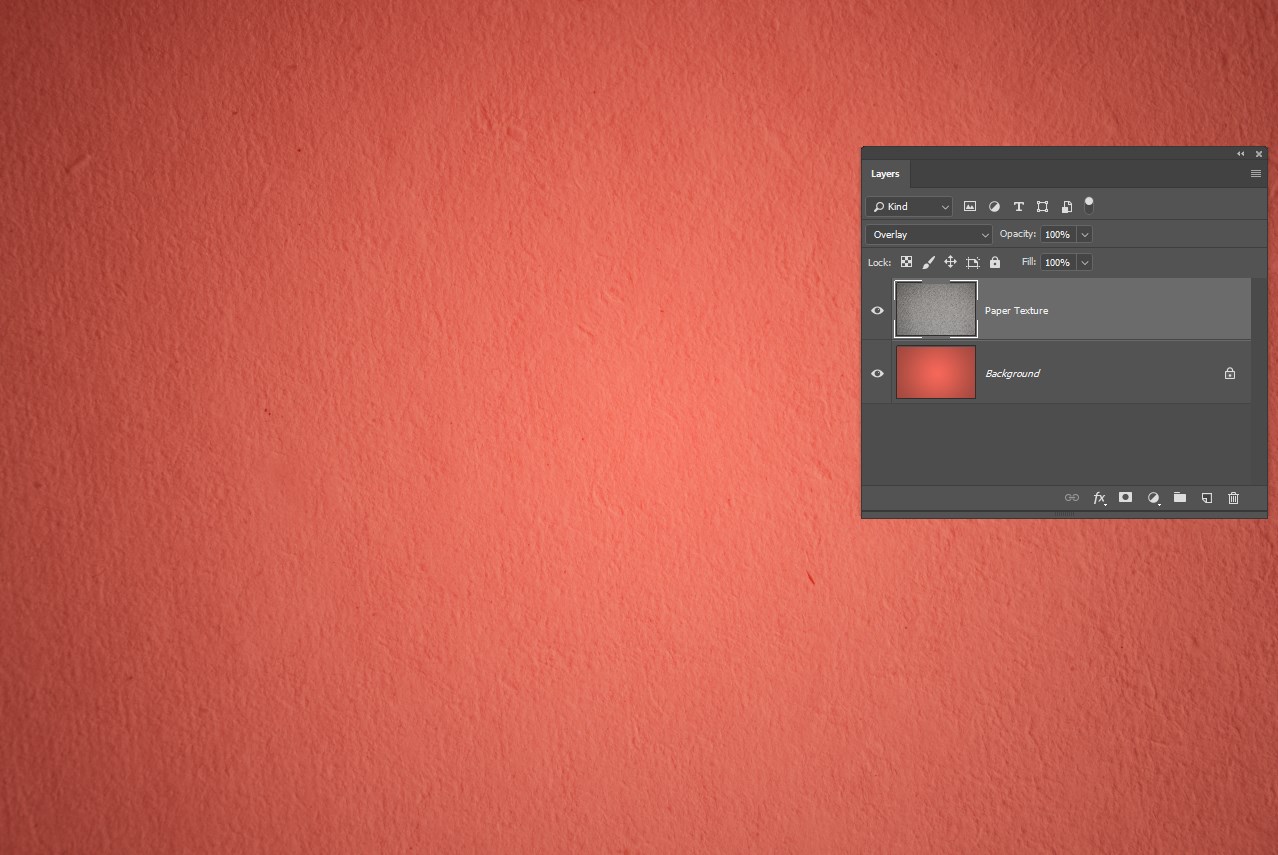 As shown already in an earlier answer something resembling can be got by blending a grey texture layer over a red gradient layer. The problematic thing is to get the right looking grey texture. One idea is to have a photo of a watercolor painting which doesn't present anything recognizable, even ordinary recognizable brush strokes should not be used, the color should be spread by other means.

In this case the colors of the painting are not important, because you need only a grayscale version. In the next image one painting is downloaded from a site which has "free modern abstract acrylic texture images":

The source site is this: https://unblast.com/free-modern-abstract-acrylic-textures-jpg/

The texture has a gradient layer mask which fades it in the middle. The texture has blending mode "Overlay" and its opacity is reduced. On top there's a black&white mixing adjustment layer with "the next layer only -switch =ON"

If it's too flat you can insert with blending mode Hard Light an embossed version of the texture image (=Filter > Stylize > Emboss). Here'a a high zoom in screenshot 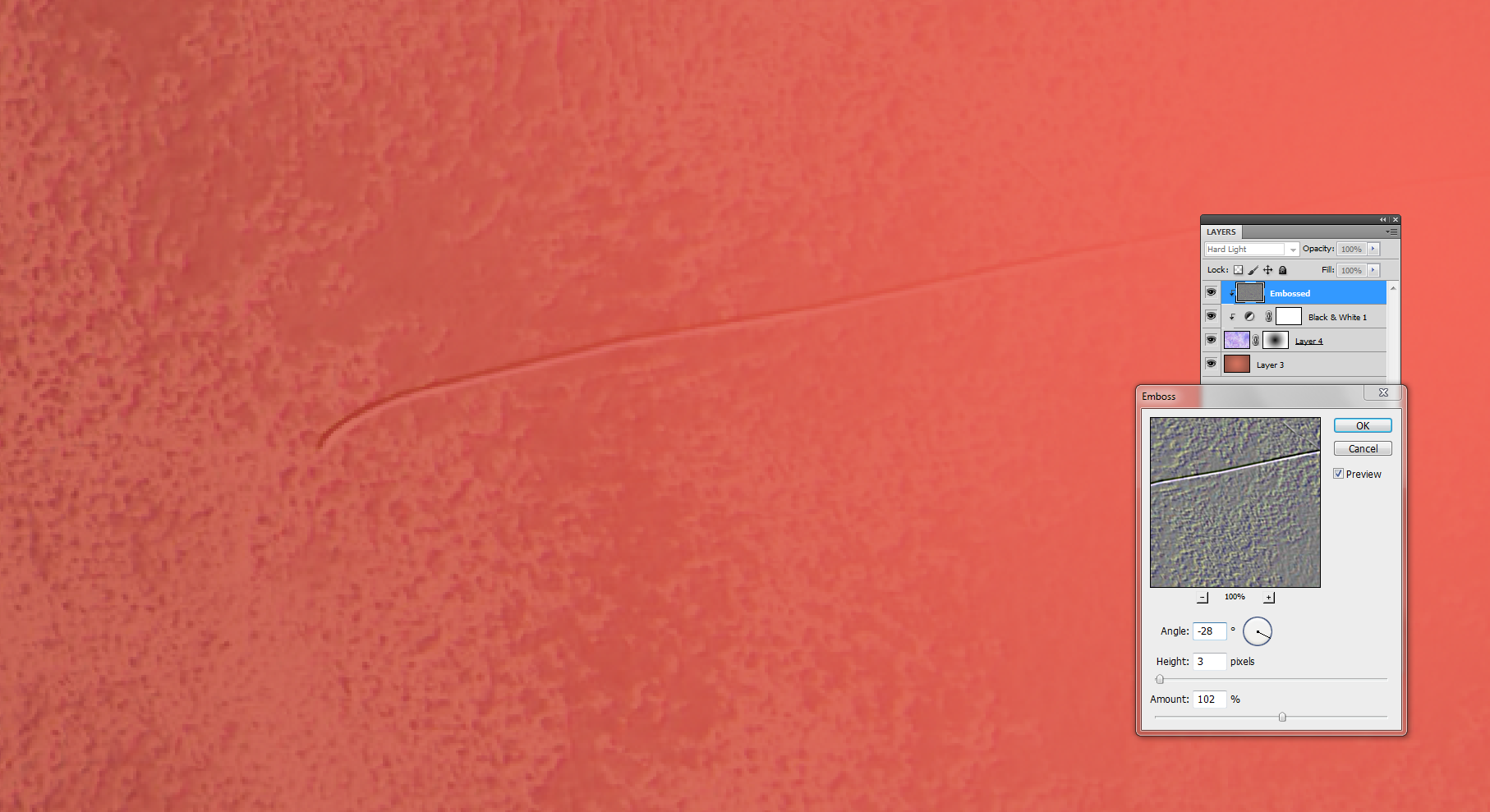 The surface scratch is a black 2 px wide brush stroke.

If you are going to publish or sell something: Websites which say they have free content to download can contain illegally uploaded copyrighted stuff or there can somewhere be a small print which says it's not actually free. To be sure you avoid copyright problems read the license carefully. If it's not free or there's no clear license available which allows you to use the image as you wanted purchase a commercial texture image or paint your own. I guess making it with on real paper is much easier than trying to find a way to make it rich enough in Photoshop.

Not the answer you're looking for? Browse other questions tagged adobe-illustrator adobe-photoshop photoshop-effects texture vignette or ask your own question.

8
How to apply, blend or overlay a texture or pattern image to a layer in Photoshop?
5
How can I create fruit's texture?
0
Creating texture from a sample in photoshop
3
Making a carpet texture
0
Photoshop Texture Overlay
1
Need help making my logo stand out from the background
1
Text Rendering Photoshop
0
Creating 3d mock-up texture
1
How was this paint texture achieved?
0
How to create the texture of a rope and a knot on inkscape?