How do they make the texture and colour in each layer

I'm attempting to replicate this, but finding single images for each layer is impossible. This makes me wonder how do they make each layer? I'm absolutely new to Photoshop and I believe the below must use Photoshop, but don't know where to start. For example the two bottom later, the inner core and outer core. 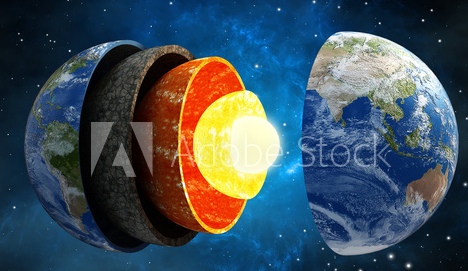 The white core and the layers around it can easily be drawn in 3D or with Illustrator's revolve effect. The latter is tricky, but definitely it's possible.

The question asked about the colors and textures for the white core and the yellow shell. They can be made or at least something resembling can be made in Photoshop. There the core and the shell can also be drawn and shaded quite easily. Here's a quick version: 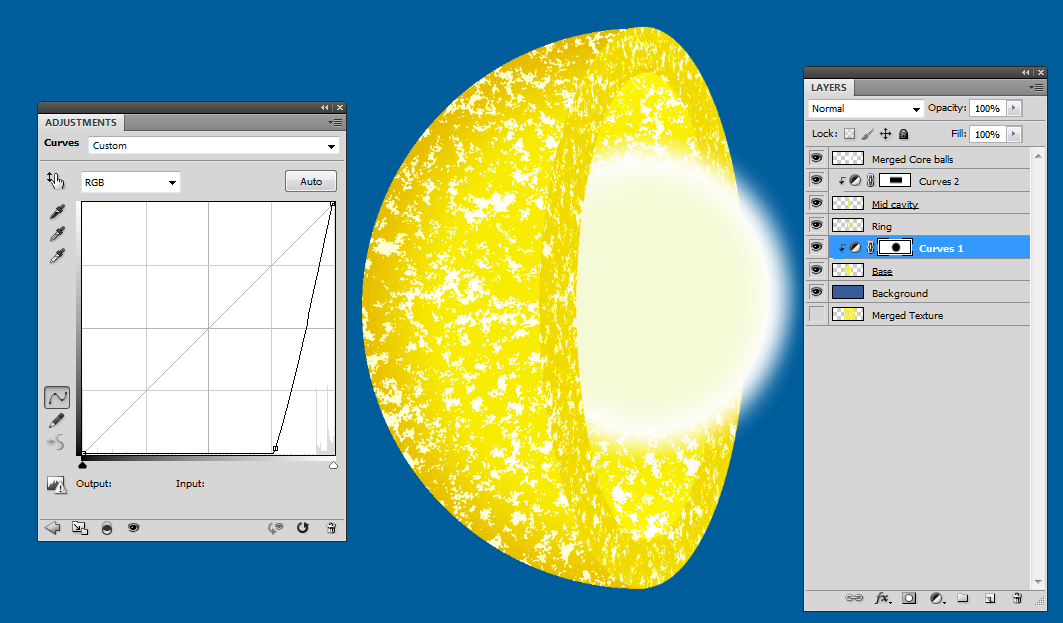 It's a blue background + pieces of yellow texture clipped to different forms and colored a little differently to make the different parts possible to be seen. on the top there's a nearly white blurred ball and another a little bigger white blurred ball as the glow. They are merged and clipped so that they do not cover the edge of the yellow shell.

As drawn apart the parts are these:

As you see the the parts do not have perfect forms but the inaccuracies fortunately are mostly covered by the upper layers.

There are 2 adjustment layers to make some coloring, other colorings are fixed. Adjustment layers are good when you try to find a good balance. Here too much darkening isn't wanted but a little 3D shading is expected to be visible.

The yellow texture is a multilayer job. It's merged to be able to clip parts easily with selections.

The starting point was solid 50% grey layer which got 100% monochrome noise filter and then 1 px Gaussian blur: 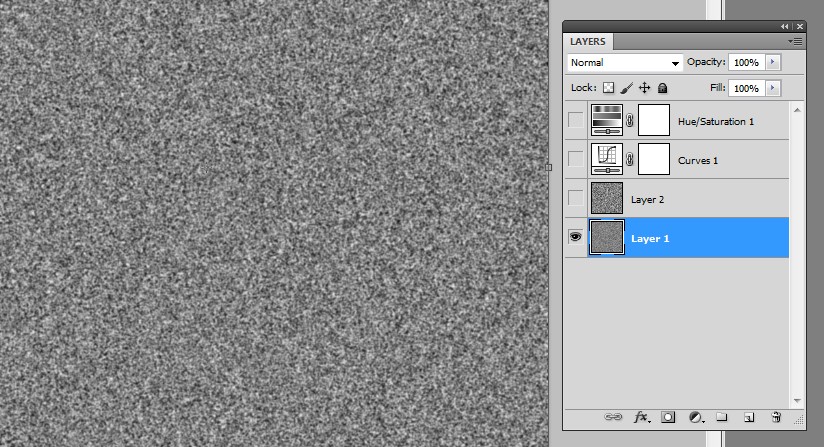 A piece of the layer was copied and stretched to a new layer to get bigger grains. With blending mode Hard Light there seemed to be enough differently sized details:

To get something which has only one color and white the result is tresholded with curves so that there's mostly 50% grey and white, only a little intermediate tones. 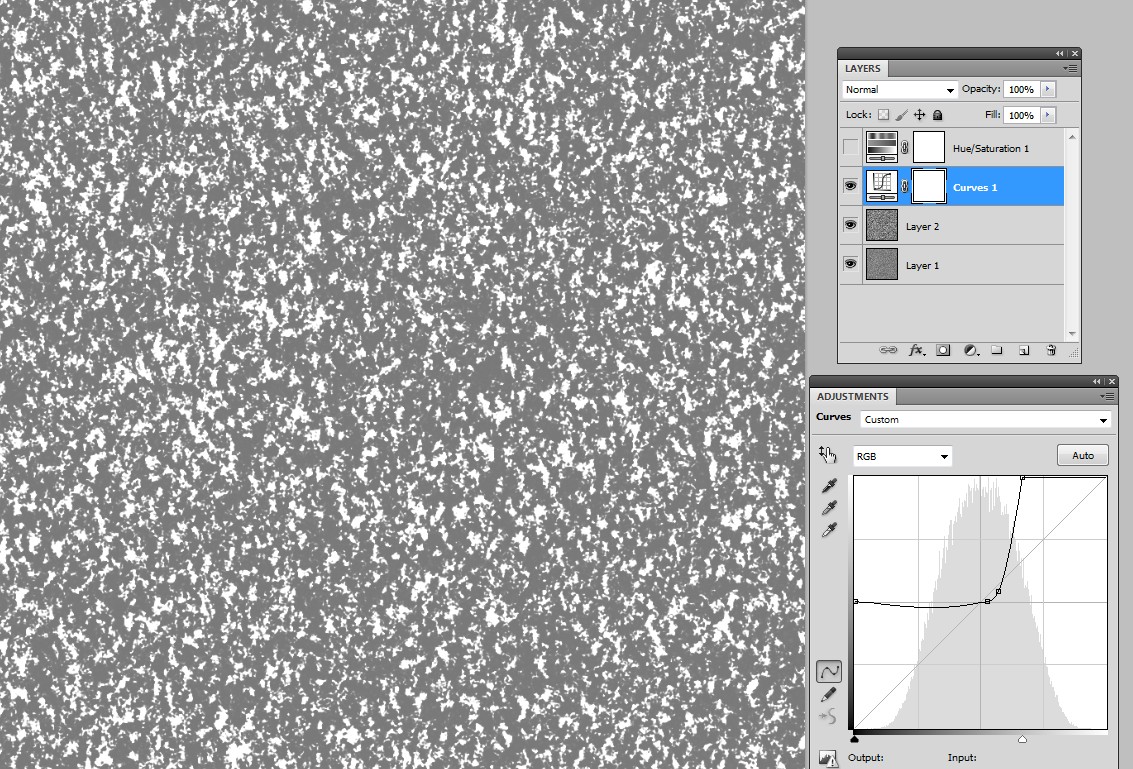 The white-grey balance depends radically on the adjustment. 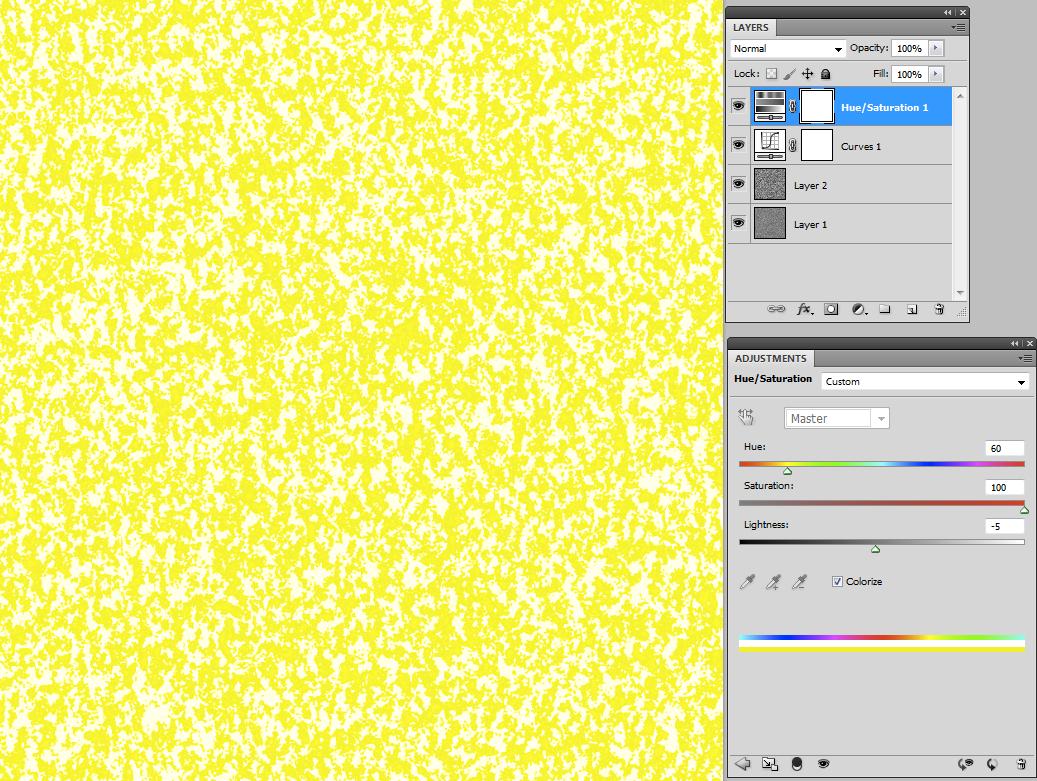 It's a little darker than maximally bright to have some room for recoloring to both directions. As said, I merged the layers to be able to operate with selections and cuts.

More advanced way is to combine the layers to a group and operate with masks. This leaves hands free for later edits.

The elliptical ring was originally round. Squeezing it horizontally to get an ellipse projected luckily also the texture to more like 3D. Using the texture image in Illustrator's 3D would generate perfect projection also to curved surfaces.

In Photoshop without 3D the texture on the curved surfaces could be warped or distorted with the spherize filter for better 3D look. Layers Base and Mid cavity got the spherize filtering in the next image. My opinion: it's more like 3D now: 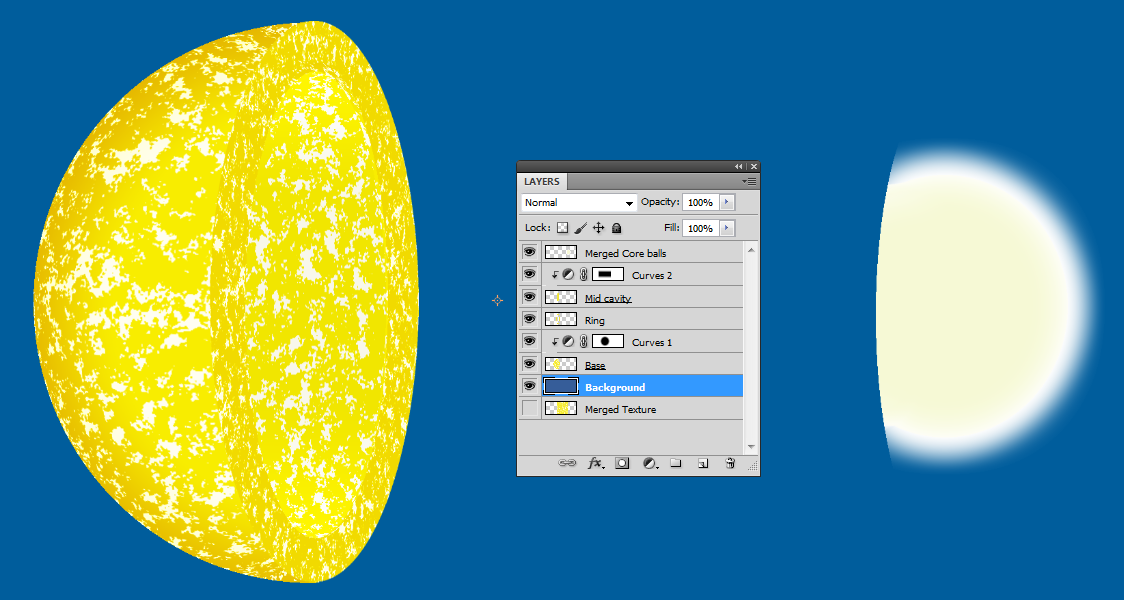 For a comparison a version is made with Illustrator's 3D Revolve. Avoiding making it too dark was tricky. A genius maybe would invent easy settings, but I didn't get the shading right in a single image. I made two layered copies of the revolved arc. The bottom version got the texture image (from Photoshop) on its surfaces, There's no shading. The bottom version makes only the geometric distortion to the texture on the surfaces. 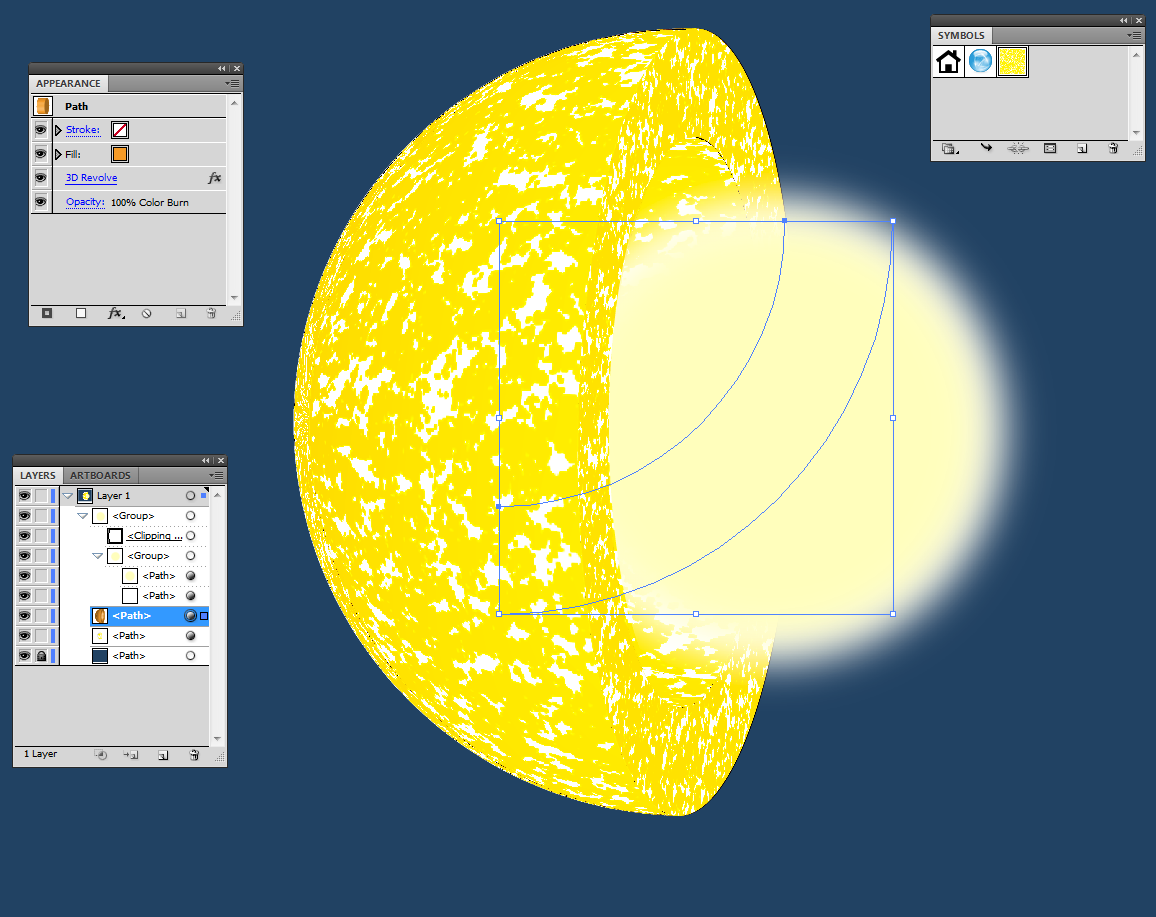 The upper version has solid orange color and it's used with blending mode Color Burn to make the yellow version a little more orange to make the forms visible.

On top there's two clipped blurred circles as the core.

The Illustration version has more subtle shading but it still looks geometrically more right. Illustrator unfortunately generates here and there unexpected artifacts with the 3D effects. You see also here some dark rubbish. It must be cleaned manually after expanding the appearance.

Now at last you should ask "what's the actual problem with the 3D shading - Illustrator and even entry level 3D programs should output something useful with default settings, they have always done so!"

The default output is this: 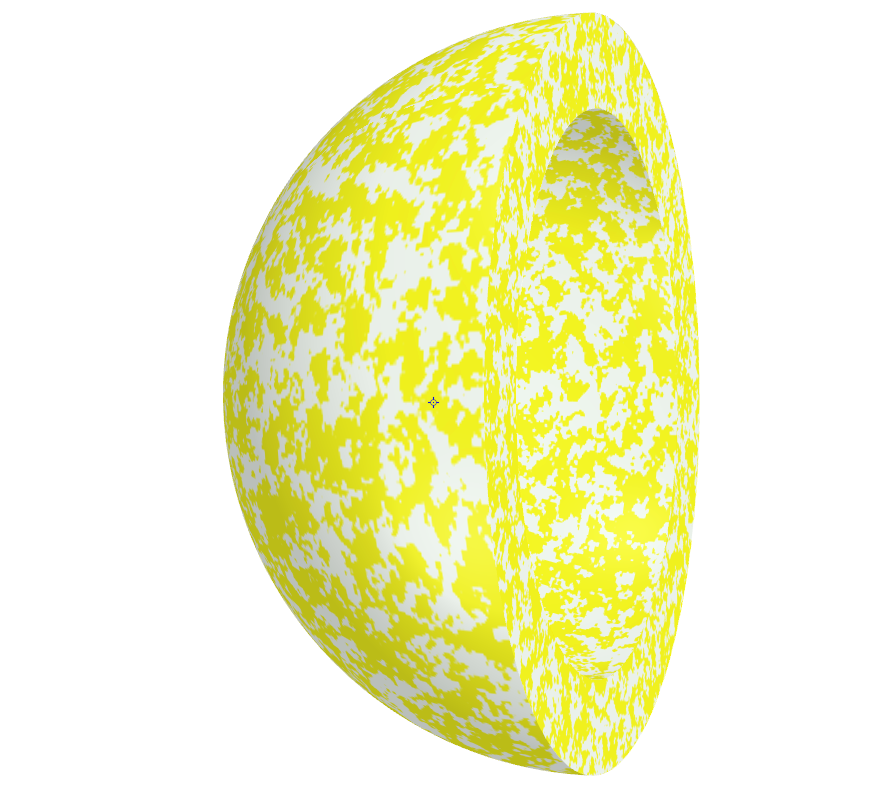 It's an yellow bowl, not a glowing object. Default shadings which literally generate shadows are useless. The right shading should not make white grey nor reduce the brightness of yellow. It should only shift the yellow towards red and that's what I have tried in previous examples.

One waterproof way to switch gradually between two differently colored versions is to have both versions in their own layers. In Photoshop you simply insert a layer mask which makes the top layer transparent where its color is needed less. In the next example the used layer mask is shown as a separate image in the right: 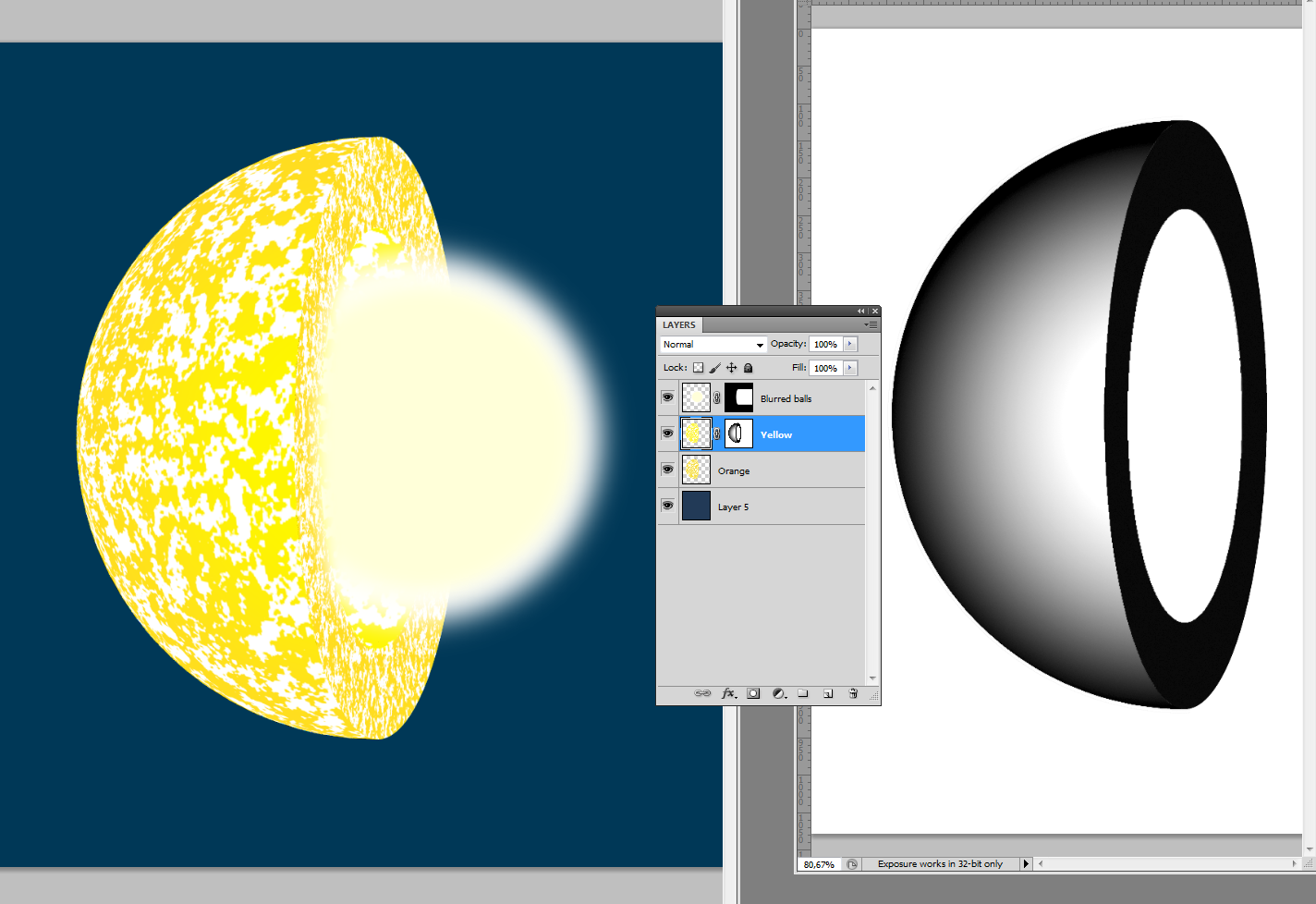 Advanced 3D programs have illuminating materials. To stay in truth also Photoshop's 3D knows them. Unfortunately 3D shapes must be imported from a real 3D program, PS doesn't have own 3D geometry modelling tools nor UV-mapping tools for generating maps how to wrap pieces of 2D images onto a 3D surfaces. There's only simple extrusions and a few preset shapes such as a bottle and a sphere. 3D models which have everything ready for smooth use in Photoshop's 3D mode must be created in advanced level 3D software, simple freebies are not enough.

-1
What software would produce this picture

2
How to use “add/subtract/intersect from path/shape area” effectively in Photoshop?
0
What's the best way to intersect a box shape layer?
1
How to create a transparent stroke or outline around a vector shape?
0
Preparing icon with arrow heads with different sizes
0
How to make a merged layer cut into a background to be transparent
2
How to make PDF characters darker for print without using photoshop?
0
What's the best way to downsize alpha transparent images in Photoshop?
1
How to substract front shapes with a Bevel & Emboss effect and get a inner sharp edge instead of a round one
0
How do I change the order and number of slices in Photoshop?