Identify a typeface that went to the moon and back

Raytheon used a peculiar typeface for their labels on the Apollo Guidance Computer components and chassis. It looks like what I'd call, in laymans language, an engineer's stencil lettering style (and that's what it probably was, assuming that it is engraved or anodized or etched based on some photographic masking process).

This design would most likely have been specified, standardized and certified in great detail - yet I could not find any information.

What is the proper term for this kind of typeface, and this font in particular? Has it been recreated as opentype or truetype since?

As to the question regarding technique or kind of typeface, I note that Raytheon manufactured the Raytheon Symbolray which was based on what is called a "Charactron" which is a stencil-based cathode ray tube device.

Note that even though the image below is a scope with text display, there is no reason the Charactron could not be used to expose film for typesetting, and I believe it was developed (in the 50s apparently) for high-speed text compositing for print. Changing the typeface meant changing the tube.

The typeface in the advertisement is very similar to what we see depicted, and the labeling on the computer may be a stencil version of the face creating films to expose a silk-screen (etc). Presumably the image depicts hand-done short-run stencils. 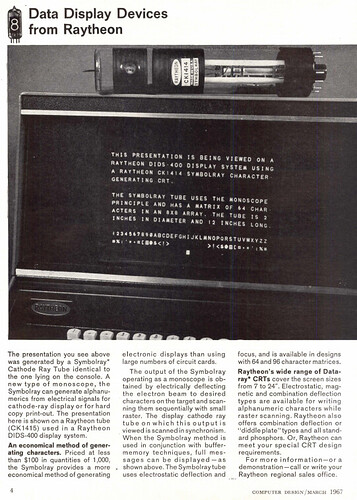 Questions like this come up pretty often. It's never a font, it's always a custom alphabet from a stencil manufacturer. Your best bet honestly is seeing if Raytheon or NASA has an archivist who would know the answer.

Challenge accepted :-)! Font identification is not an easy task, so first I cleaned up your image a bit and straightened the perspective a bit using Photoshop:

I could only find commercial fonts, but here's some close matches I found using the font identification tools available online:

I don't want to place the links to the fonts here, but you can easily find them with a search by name.