In Photoshop, how can I replicate the color tone (sepia) from one photo to another?

I scan old original photos from the 30's and 40's and for some of them I get some blueish metallic reflections that are not visible "in person" (and the photo paper is not glossy). I think this phenomenon is called silvering (or mirroring?).

Here is an example with one of my photos (look on the person and in the dark areas of the photo you'll see the blueish reflection - look at the photo at 100% size otherwise it can be hard to see):

I use a color deconvolution plug-in in Photoshop to remove these reflections with amazing success:

But the reparation process changes color tone of the image (the sepia). In the example above the original is a bit more brown/yellow.

How, with Photoshop, can I restore the original color tone after removing the reflections?

Your filtering has changed brightness and contrast and inserted a new color here and there. That's already said by others, too.

My suggestion: Fix the blueish areas selectively by placing a masked color overlay.

At first make a duplicate of the original image. Keep the original in the bottom as a spare. Hopefully it's not needed. Insert a 60% gray layer below the duplicate. Let the duplicate have Blending Mode = Color. Blueish areas and sepia areas can be seen clearly. Use Select > Color Range > 50% Fuzziness to make a fuzzy selection of the blueish areas: 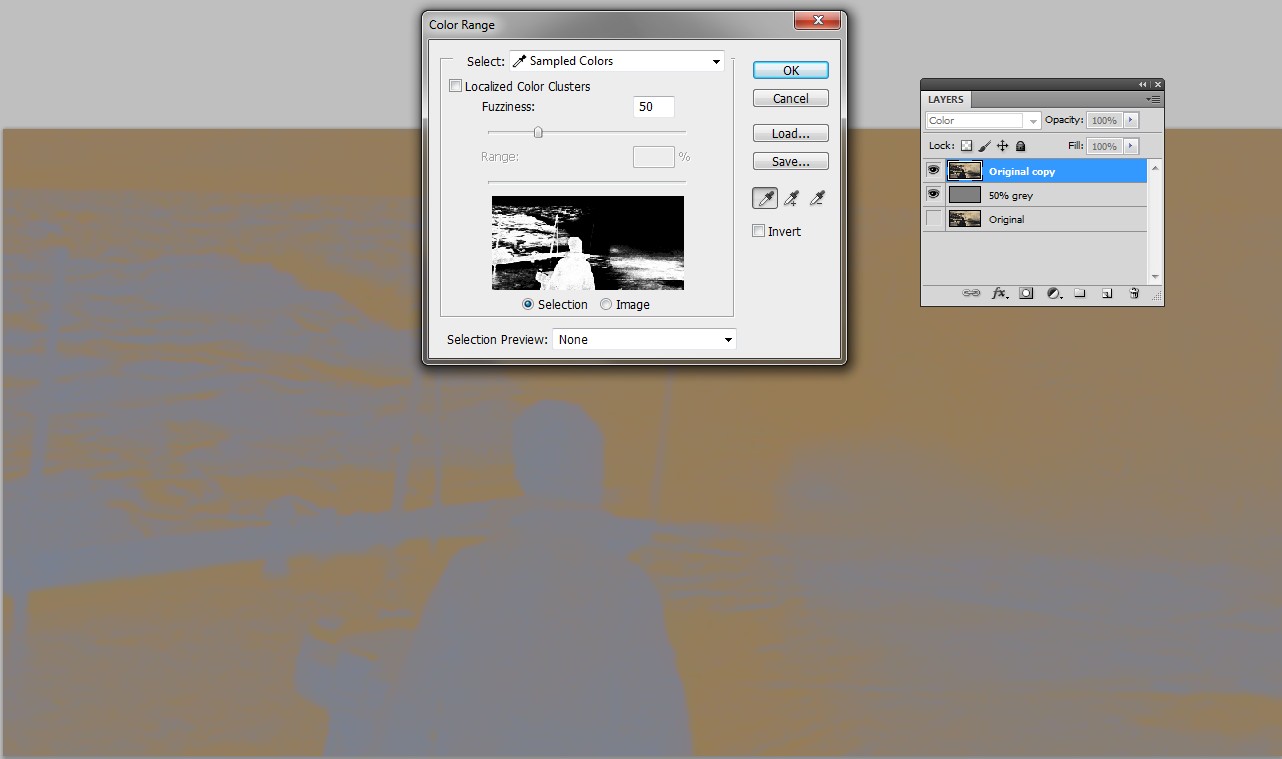 Do not lose the made selection! Save the selection if you suspect your carefulness.

Pick the sepia color to the foreground color with the color picker. Write its RGB values to paper in case you want to use it later elsewhere.

Change the blending mode of the duplicate back to normal Insert a new empty layer above the duplicate. Let it have blending mode = Overlay. Insert a layer mask. It will be = the blueish areas if you succeeded to avoid losing the selection. NOTE: The mask is not strict BW, there are greyshades because it was a fuzzy selection.

Remove the selection (it probably vanished when the mask was created and that's OK). Fill the new top layer with the sepia color: 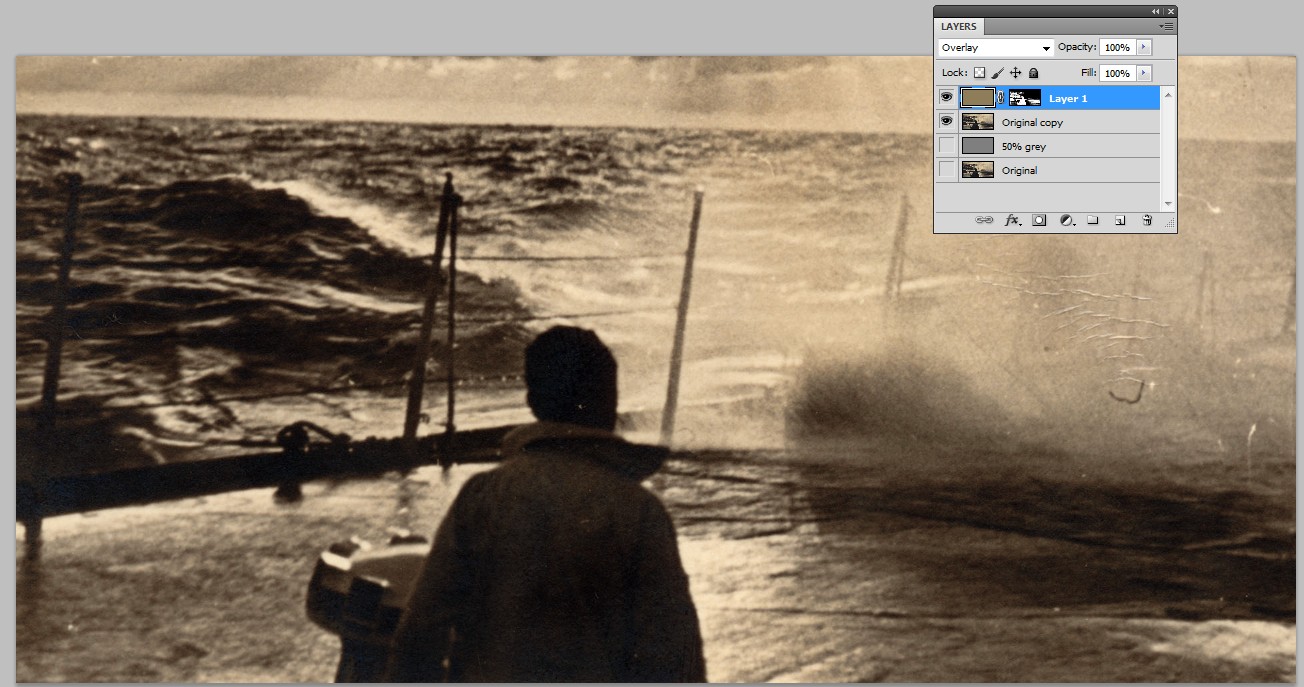 That's the new version with fixed blueish areas. Test it by closing the top layer temporarily.

If you want to recolorize the filtered version, desaturate it and place it under the sepia overlay. It's tried in the next image. NOTE: The layer mask is disabled. It's not needed: 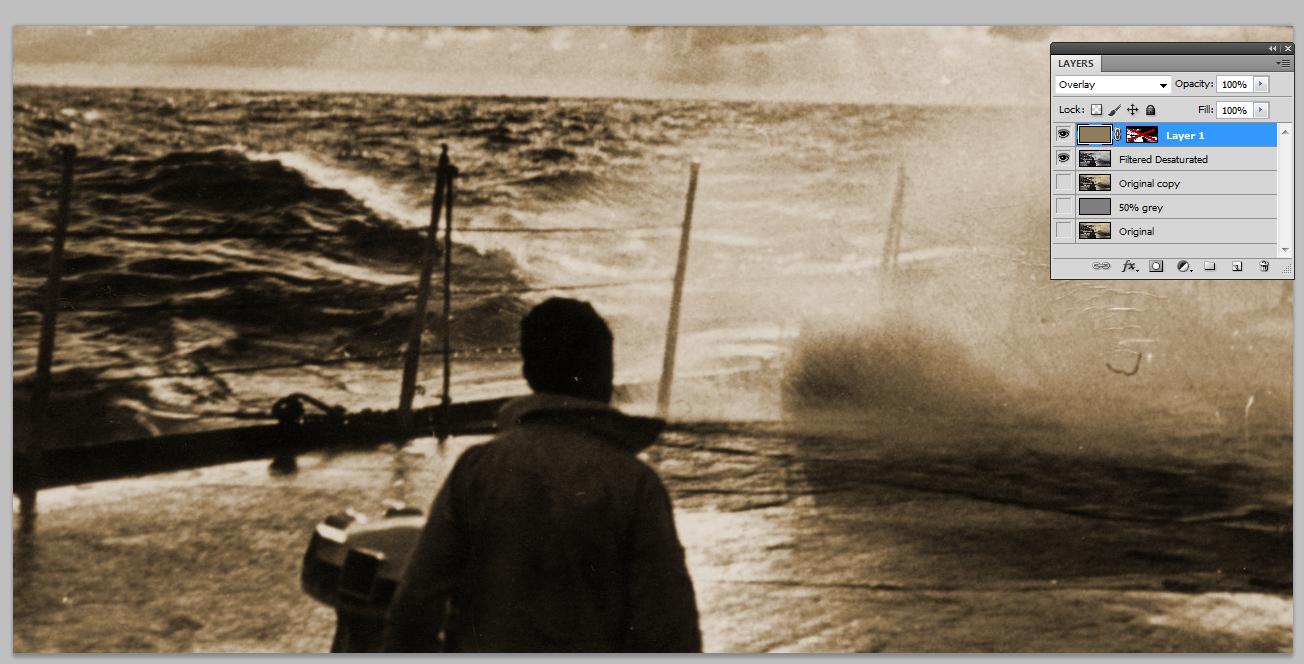 Overlay blending is only approximately right. I do not recommend to use it as unmasked to desaturated original. use it only where the color is lost.

Actually It's not lost. It obeys too well exposure strength borders. I guess the sepia treatment is done incompletely - too short whitening bath, there's still much metallic silver left in thick areas.

If it really is blueish (=not a white imbalance as an opposite of brown) it can even have got a second toning which converts a part of the silver leftover to another colored material. A darkroom specialist can tell the truth. Unfortunately I'm not one.

The original sepia toning changed metallic silver to brownish silver sulphide. Other tonings: Gold as in place of photo paper silver is blueish black, not yellow. At least selenium has been used to replace the silver, too.

All these tonings have artististic impact but also they slow down the degradation of the photos because metallic silver is very fragile in non-pure air.

Before editing the photo, use the eyedropper tool and pick the color of a middle-toned, well saturated area. This will be stored in the foreground color swatch.

Next do the needed adjustments.

This will create a layer that is uniformly filled with the color you picked at the beginning (foreground swatch). Click ok, and then change the the newly created layer's blending mode to 'Color'.

In the last step flatten the image to apply the color adjustment (Layer -> Flatten image).

Tip: save (or write on a paper) the given sepia tone's color hex value (#rrggbb) and you can enter this value when creating the color adjustment for another photo. Useful in the case when the foreground color changes during the image processing, or editing another image in the future.

All you need to do is scan the images black and white and then apply Gradient Map to them.

Gradient Map is bellow the layers (Contrast Icon). There you can first add black and white adjustment layer, then add Gradient Map and choose the colors that you like. You can group these adjustment layers (select and Ctrl+G), then you can paste any picture below them and it would be your perfect custom sepia effect with any picture. You can also save your gradient preset for faster workflow.

I think what the plugin has done is a bit heavy handed to be honest. It has not only removed the bluishness in the shadows, but has kind of stretched out the highlights and resulted in a subtle colour shift over the entire photo. You can see this if you check the histograms for each image.

Maybe try a different technique to fix the photo, something a bit more targeted to the specific areas that need fixing.

Alternatively, perhaps make a selection of only the shadows before applying your plugin.

Not the answer you're looking for? Browse other questions tagged adobe-photoshop color-reproduction or ask your own question.

1
how can I replace a color with another one in photoshop ?
2
How to create a glossy photo?
3
design on apple.com -- how to transition from one photo (color) to another?
2
Replace artwork while retaining (extract) the reflection, specular highlights and texture of a metal surface
2
What kind of prep and considerations for using a night photo in print work?
1
How can one accurately reproduce color from an already printed (hard copy) color block?
2
Color values change from one Photoshop document to another
2
How to edit text that is in a jpg photo (using newer technology)?
5
Replicate InDesign duo-tone in Photoshop
0
How to add golden tone to sparkles