which artwork dimension to use for mobile app design

I am designing app for ios and android in photoshop. I know I must export graphics to 3@, 2@, 1@ for ios and mdpi, hdpi, xhdpi, xxhdpi, xxxhdpi for android. But I do not know, what size of artwork should I start with? (dimensions, width x height)

I think better will be to start with bigger artboard and the downsample each image to specific output size. But because of so many resolutions and sizes of displays, which size should I pick for ios and which for android?

Photoshop is not so popular any more with app designers, because it basicly remains a photo editor with poor typography and alignment features, and not well optimized for an UI workflow. Use a more modern wireframing tool like Sketch, Figma, Invision or (Adobe's own) XD and these will come with built-in presets for devices and automation in downsampling the artwork.

Maybe just avoid using Photoshop to design user interfaces/apps. With the best will in the world, Photoshop isn't designed for this. It's a photo editor.

Adobe has XD (for Mac and Windows). It's vector based more like Illustrator in some ways. Try that instead (and believe it or not, it's actually free). There are also other similar applications out there worth a look: Sketch (Mac only), Figma, Lunacy by Icons8 (Windows only), etc.

XD has all the resolution presets built in to the Export Assets panel, since that's what it's designed for. 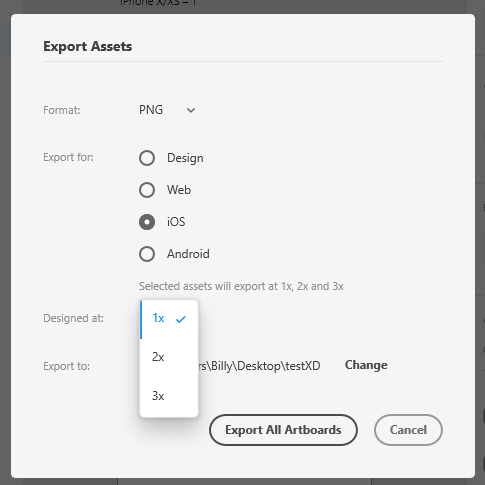 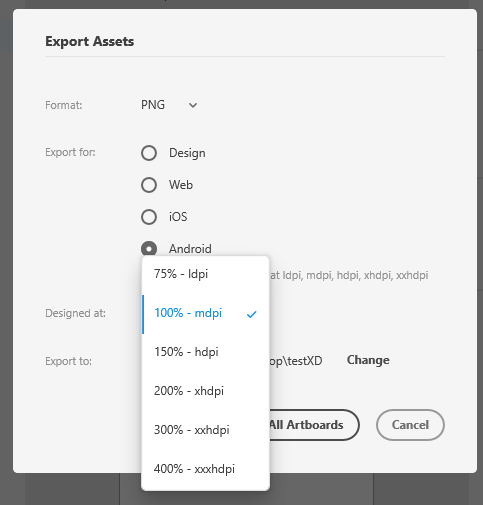 3
Minimum set of assets to cover all screen sizes, densities, and orientations on Android
4
How to create Android PNG Icons from an SVG using GIMP
2
How to Resize UI elements for iPhones?
0
How to create a common app design (PSD) for mobile iPad and Android?
5
How can I achieve consistent colours in my app on different mobile displays?
1
Designing an Android app and supporting multiple devices/screens
1
How to output multiple image sizes from one design?
2
How to prepare (what all sizes and resolutions) mockups and UI graphics for an Android app in PS
2
Sizes and dpi confusion