This started as just a bit of a joke when my partner this morning accidentally said,
"Shall we watch Boris Gump tonight?"
When I'd stopped laughing I stole ermm… borrowed some imagery from the interwebz to make up 'that picture' from the movie. 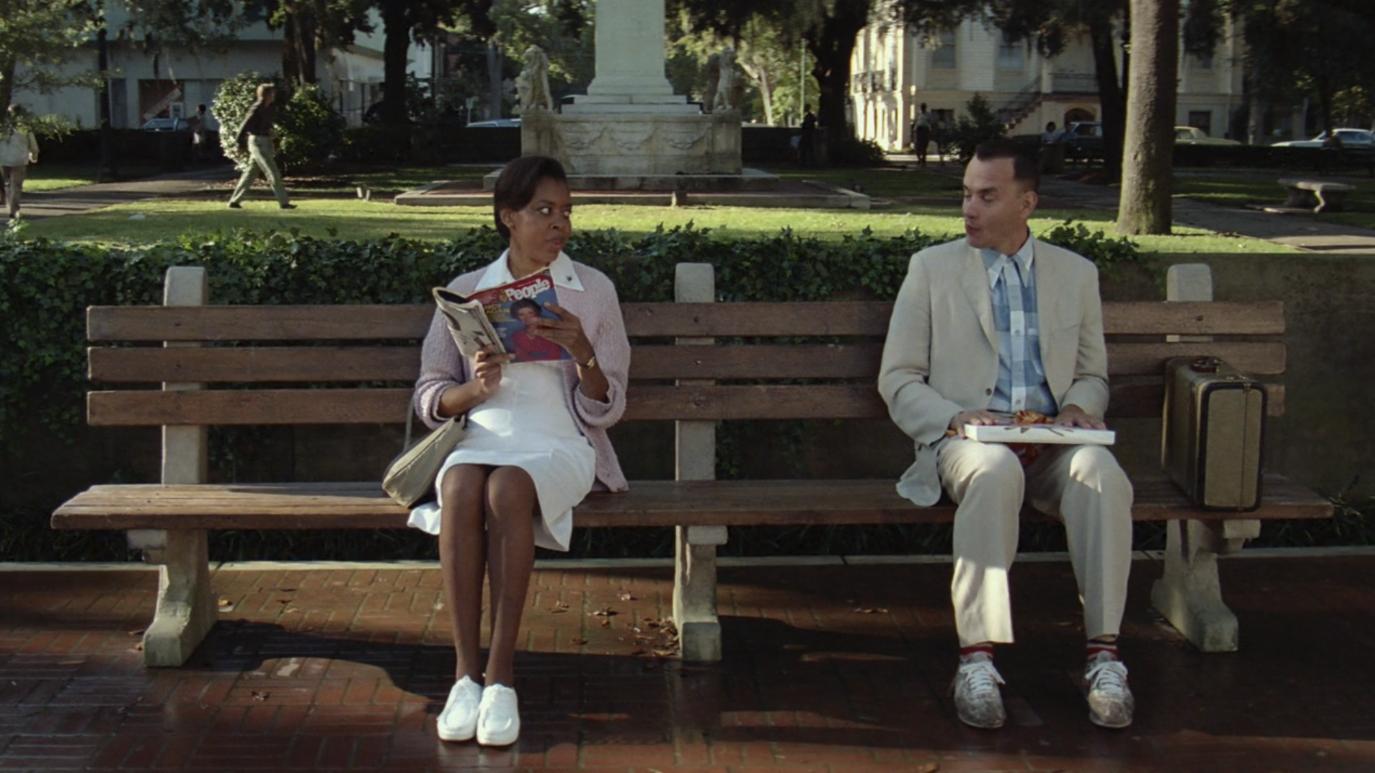 I quickly tidied up some extraneous 'noise' & people from the background, as it was going to conflict with my added title, & also poor Tom's head got similar treatment. 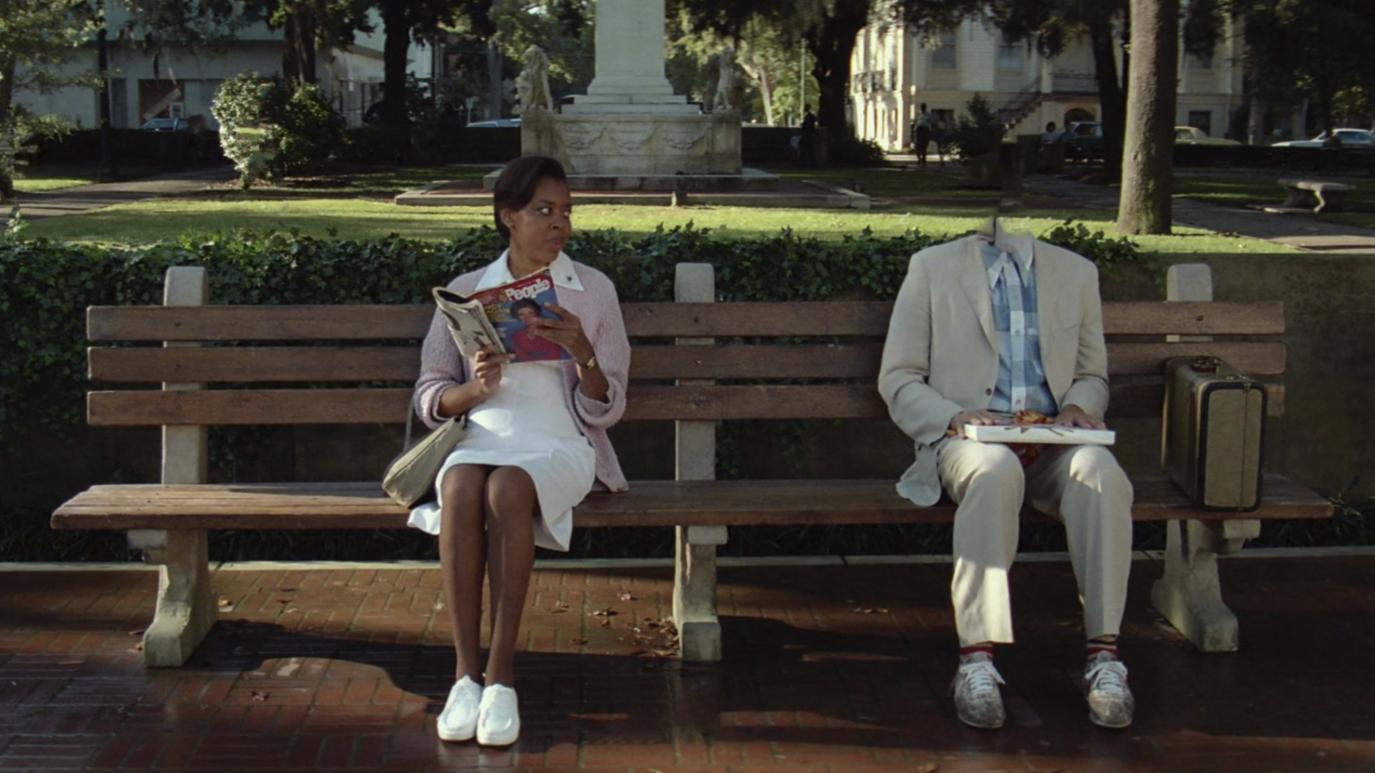 I got a pic of the alluded-to politician, facing approximately the same way, so head, shoulders, neck twist ought to match up. Some drastic resizing, a mask & some edge feathering & I plonked him in place. 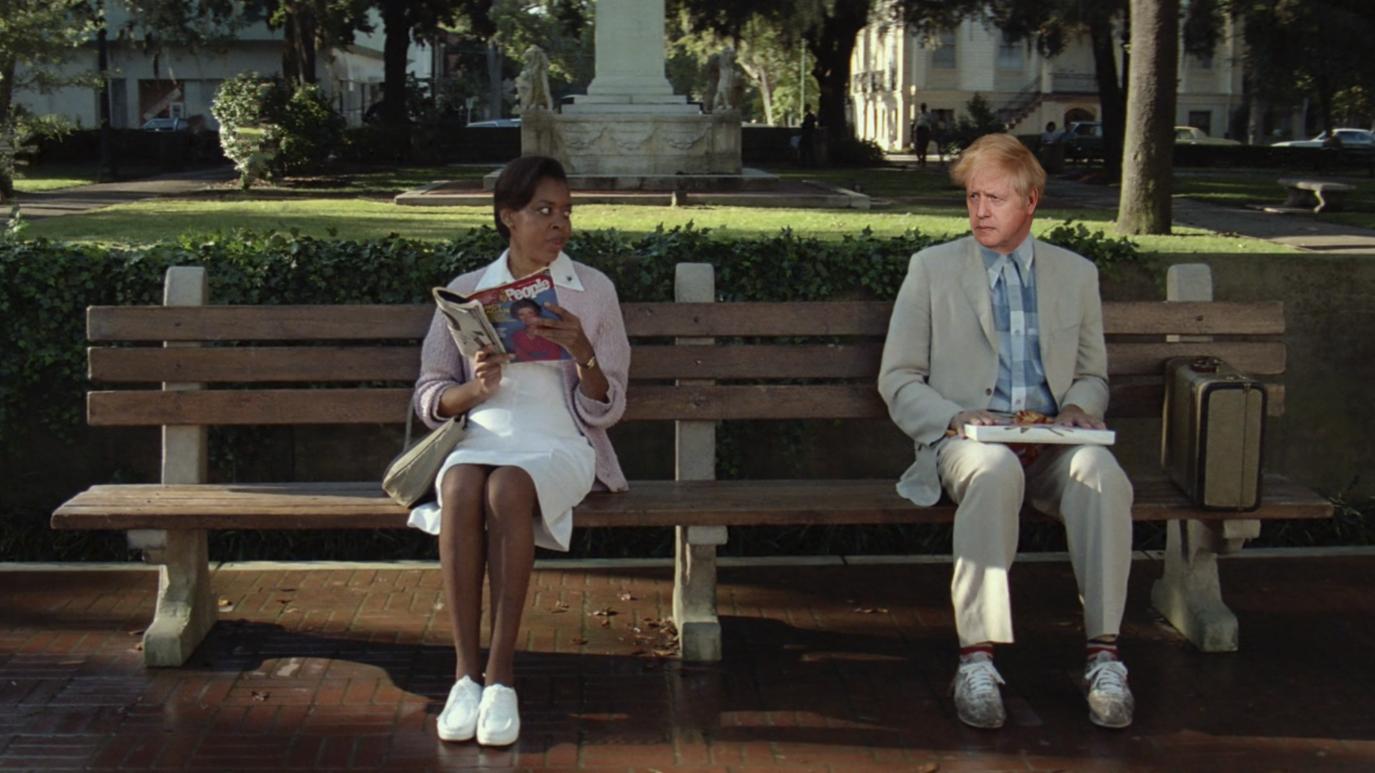 A hopeless lighting match, of course, but beggars can't be choosers.

All to do now was to try to get the picture quality & lighting to match. Boris's head was a great deal sharper overall than the movie frame.
I re-shaped the lighting to try better match the rear sun & front soft light fill with airbrush, dodge & burn, colour-matched to the best of my ability & softened both Boris & background until they are an almost match for overall 'image quality'.
An hour or so later I had this. It's kind of OK but it's not really that convincing. 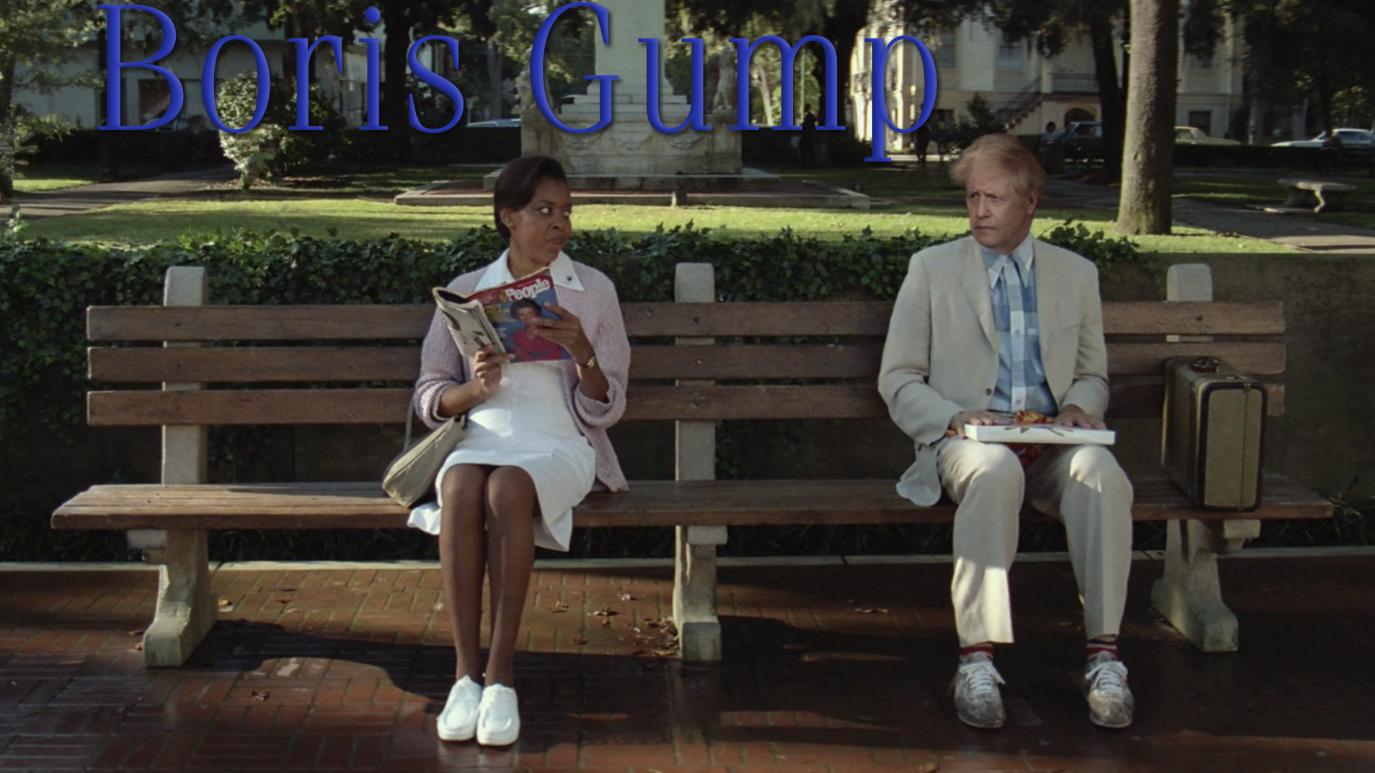 It still doesn't quite sit right to me.
It might be fine for your average Facebook post, but I feel there's more that I could have done.
Is there something I missed, or am I biased because I know it's "photoshopped" & keep directly comparing to the original? Or is this just 'the best you can hope for' from such disparate image sources?
Of course, the more I look at it, the more I'm bothered by such as the front soft light pushing Forrest's shadow to camera left, even though the sun is low & back left...

My original images are larger than this & the above are just screen shots from Ps, but I think the overall look is preserved to demonstrate the issue.
The work was done in the last Ps CC 2020 Mac (not looked at 2021 yet).

After comments
I pushed the lighting harder left & removed some additional distractions behind the feathering. Better but still missing something. 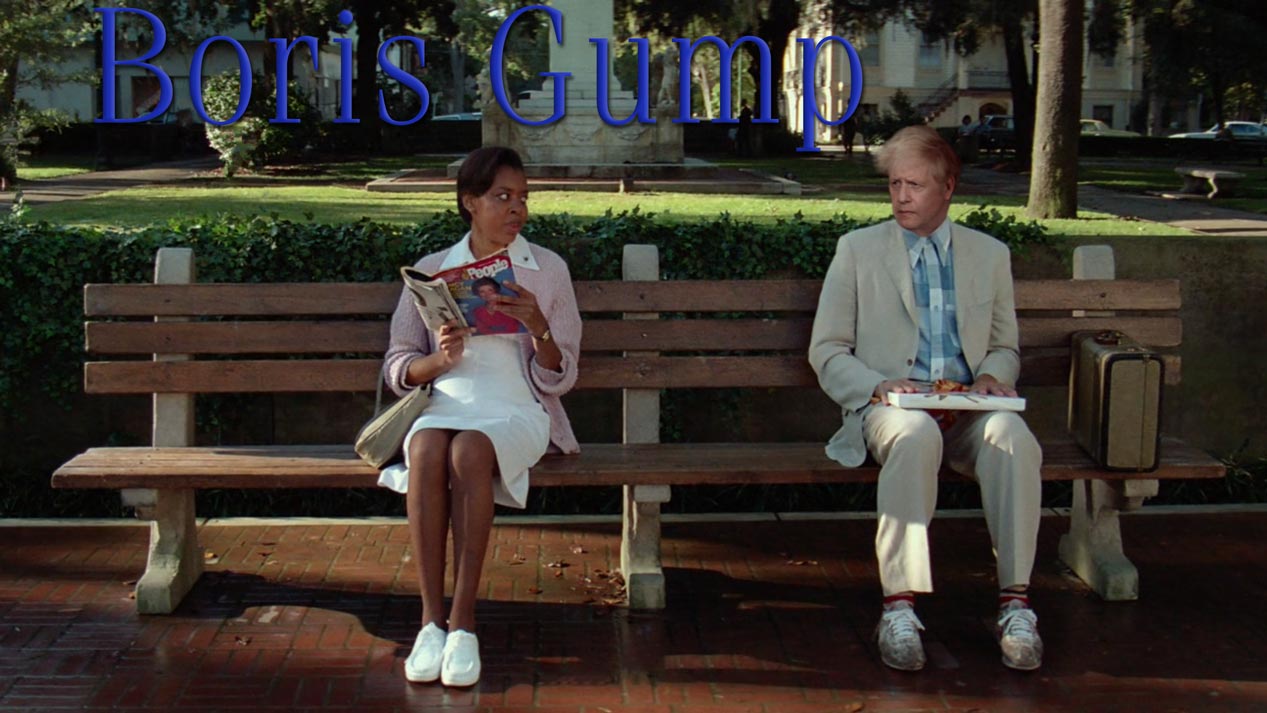 The face of BG points to different direction and there's no direct sunlight. Your grabbed face doesn't need new highlights nor shadows except the back hair must be darker. The corner where some gloss could occur is hidden.

In higher resolution the situation can be different.

I tested light and color matching by inserting 3 masked adjustment layers and having a floating reference for side by side comparing. BG needs more contrast (Curves 1) and the saturation must be reduced (Hue&Saturation). Layer Curves 2 makes the back hair darker to make it less offensive against the dark background. 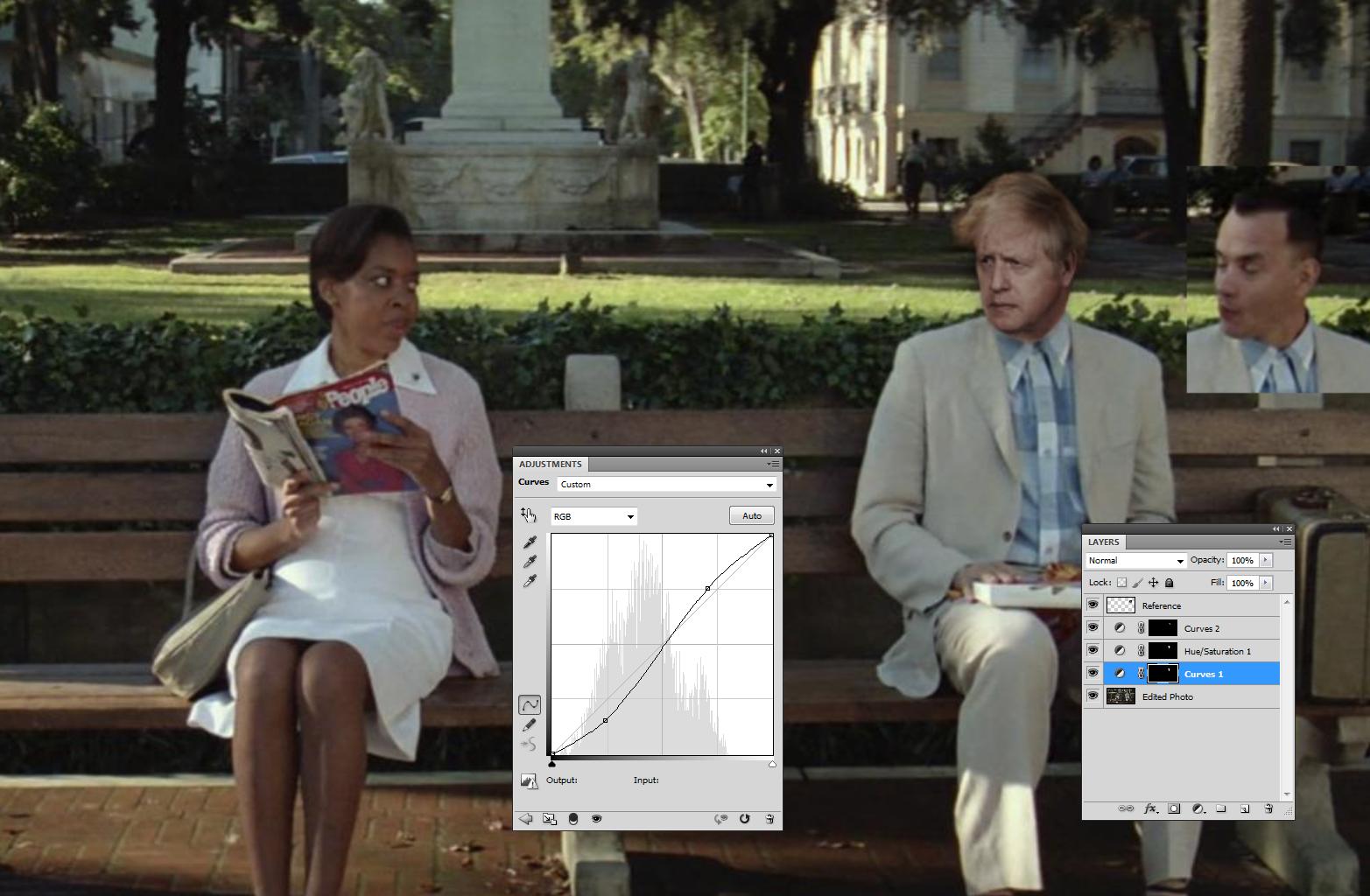 Making this BG to have a smile needs a higher resolution image and some real talent. As a workaround I would start from a shot which has more ready to use non-technical qualities - like this: 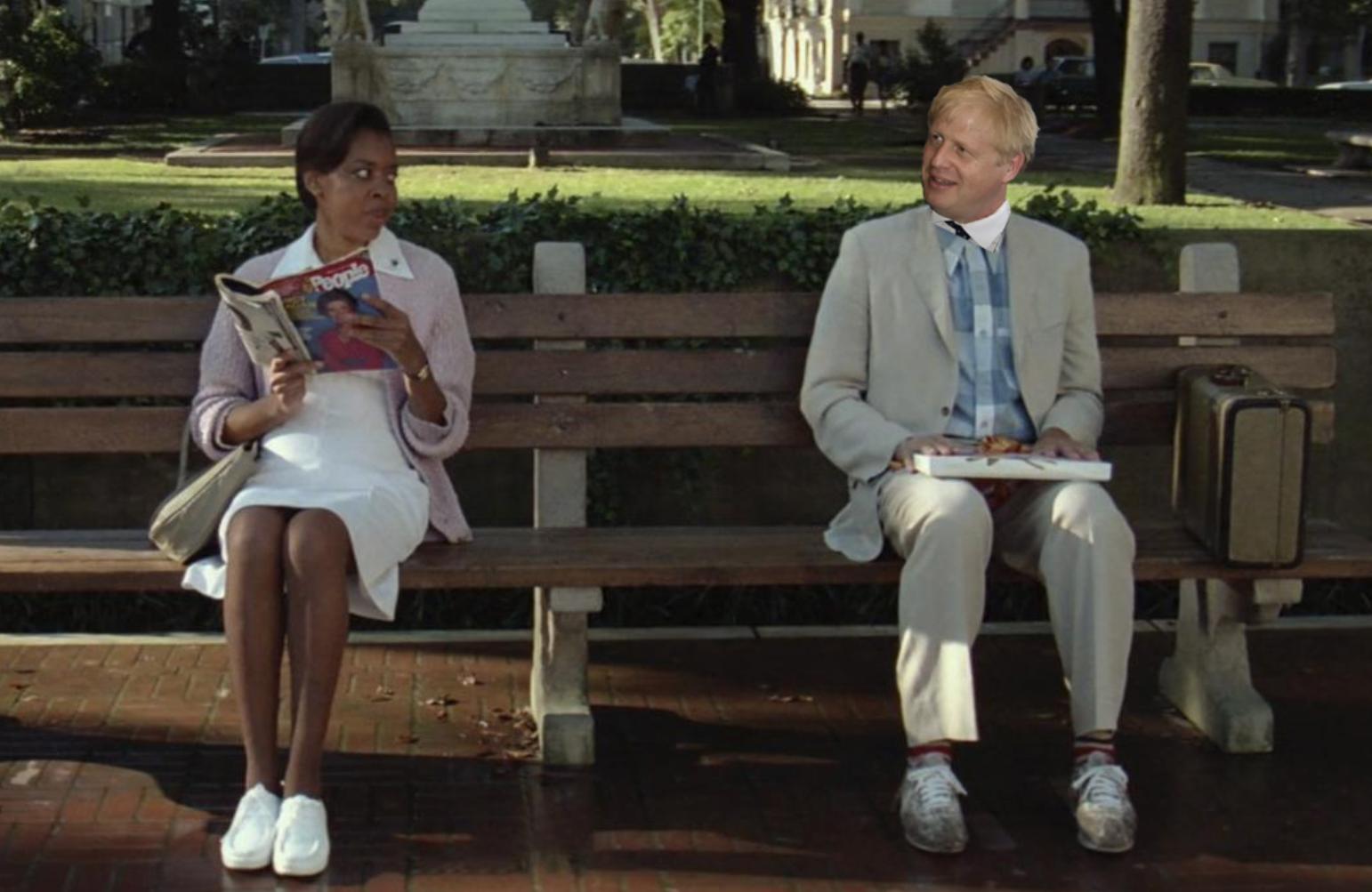 My opinion is that as a joke it will do its job well as soon as the face expression and the geometric placement are ok. Also there's no need to degrade the head of BG. The result would be better if you adjust the colors of the original movie grab because people have seen the owner of BG's face in well lit and colorful onscreen news photos: 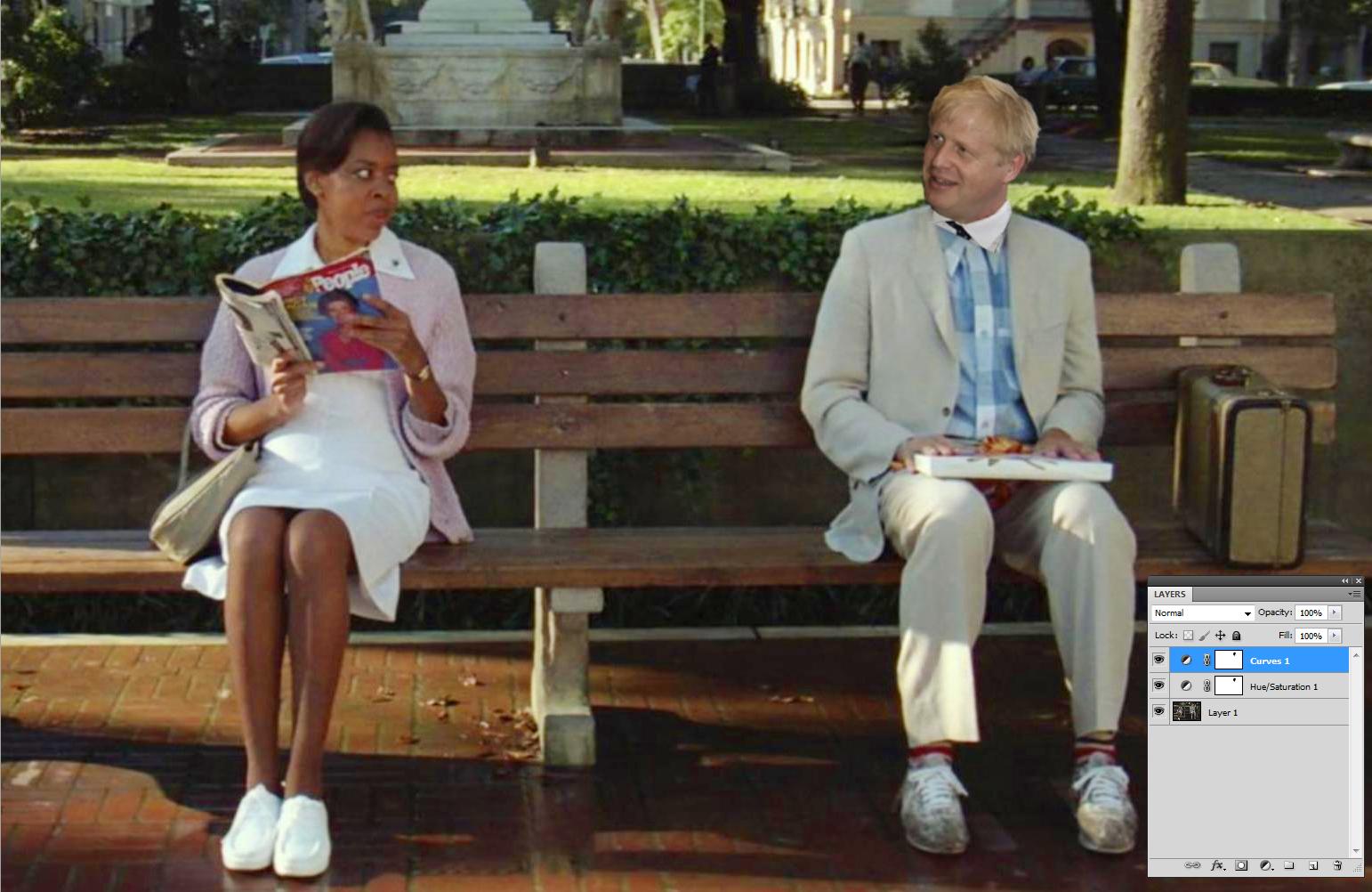 Not the answer you're looking for? Browse other questions tagged adobe-photoshop lighting-effects color-match or ask your own question.

2
Problem matching colors
1
matching color tones and lights of 2 images with photoshop
2
Matching a Digital Image's Color to a Scan
1
How to preserve and reproduce lighting effects on print
23
How does Yoga Perdana colorize his illustrations?
0
How do I create this lighting overlay in Photoshop?
2
Evening lighting on (badly) photographed archive documents
2
Lighting setup for C4D
0
How do I acheive this monochrom type of lighting in photoshop?