Does a scan need descreening if meant to be printed at the same size?

Most tutorials online related to scanning a document are dedicated to film scanning. If not, then it's about saving old photos on a hard drive and viewing them on a screen. For that second case, they all suggest using a Descreen application to get rid of the halftone moiré pattern that just looks terrible on screen when magnified.

My case is different so I don't know if I should do that: I'm scanning game cards (with large illustrations) that I want to translate before printing them again at the same size. So, basically, the illustrations will just be looked at their original size anyway. They are not meant to be seen on screen.

So, As I intend to print them at the same size eventually, do I need to Descreen them first? Because descreening comes with a cost: I loose sharpness (even if I re-sharpen them again later, it's still a trade off). But if Descreening has no point when re-printing the cards at the same size, then I'm better off not losing anything.

So, which one is it?

I don't have a printer and I plan to send my files to an online company that is specialized in printing those. So I can't make some tests at home to check this. That's why I ask.

PS: consider, of course that I want the best results possible, not just something that more or less works.

Yes, it's important to descreen a scanned halftone image even though it's going to printed at the same size as the original.

In this answer I will assume that you are printing with offset or a digital printer which uses halftone screen. Many digital printers use stochastic raster and won't have the exact same issues, but likely something similar.

The moiré pattern you see on screen is the dissonance between the halftone pattern of the scanned original and the pixels on your monitor. It's particularly visible at uneven zoom levels like 33.3%. 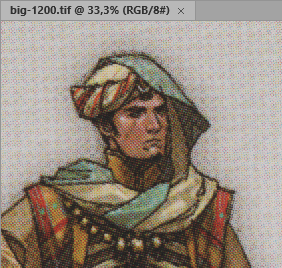 Although it's the same phenomenon, it's not the same moiré pattern you will see on print. You can't really rely on just viewing your image zoomed out to get a proper preview of how the halftone dots will affect the final print.

When printing we can only print solid colors. To make tints we have to do some kind of screening. With a halftone screen a 300 ppi 8‑bit image are interpreted and turned into a 2400 ppi 1‑bit image for each channel with sharp halftone dots (these resolutions are commonly used examples).

You have a scan of the printed halftone dots, but there is no (common) way you can recreate the original CMYK separated sharp halftone dots which was used to create the print in the first place. Firstly, the scanned image is just a soup of RGB pixels and no longer separated into CMYK. No way to know exactly which channel each pixel represents. Secondly, the scanned image is too blurry to clearly distinguish each dot.

If you do send an image to print which contains halftone dots, the dots won't be printed "directly", but they will affect the printed halftone dots in a pattern that is most likely out of sync and create the dreaded moiré. The patterns will most likely have an offset, the frequency of the patterns will likely differ and they probably have a slightly different rotation.

Here I'll try to make a preview of how I believe an image with raster dots will look on print. This is a home brewed method I made, so take it for what it's worth. That said, I believe it gives a pretty good idea of what to expect.

First I apply a halftone pattern similar to the ones used for print: 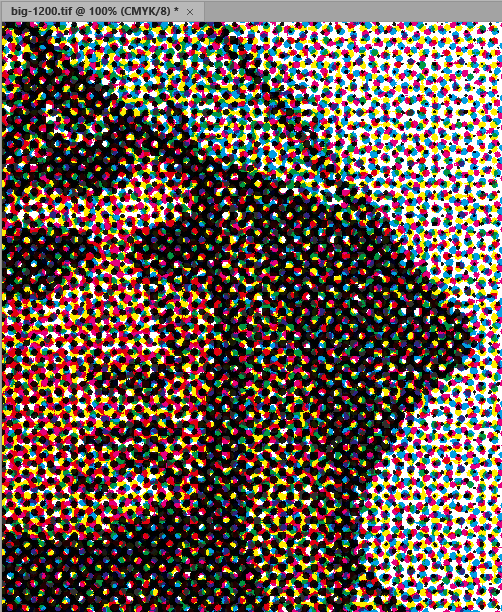 I want to smoothen the image a bit to make it look more like a scan of a print: 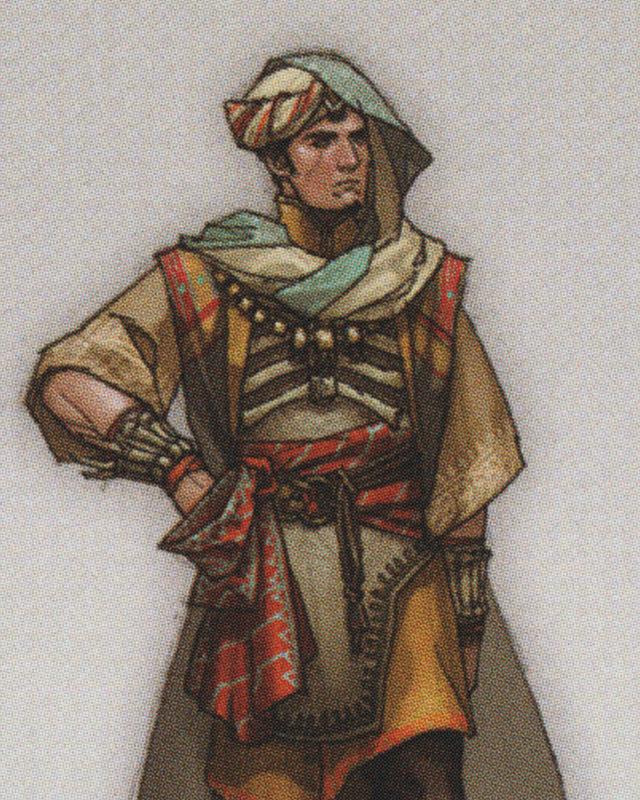 This looks pretty much like I'd expect the final print to look. The are some obvious problems with moiré and the overall appearance is noisy and gritty.

For comparison I've tried to sloppily descreen the image before applying the above method. 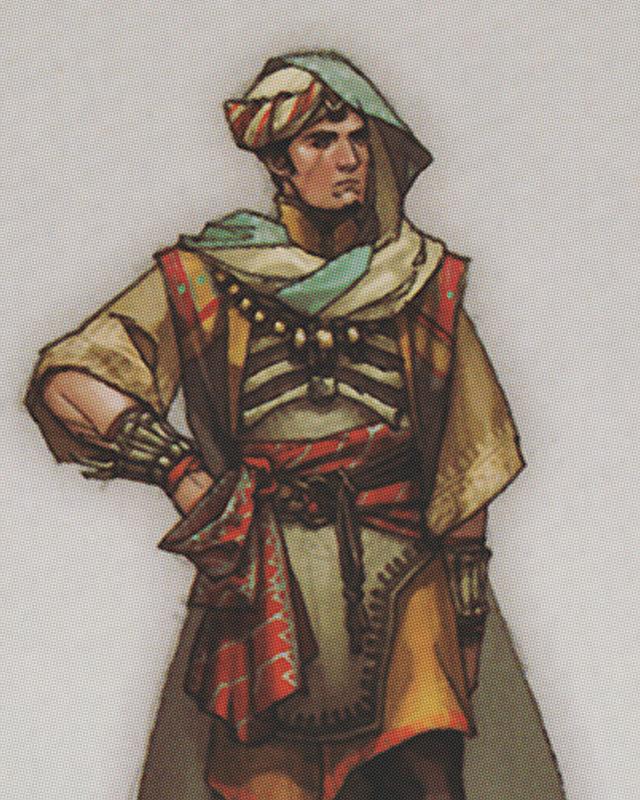 This looks way more even and smooth. Some of the details are lost (you could probably do a better descreening), but we don't get that same gritty appearance as before. I would prefer this result to the first.

Another reason for descreening an image is that you probably want to color correct the scanned image before print and having halftone dots really makes it difficult. Any correction will affect the edges of the scanned halftone dots and thereby affect the image in unexpected ways.

Furthermore, the halftone dots create the illusion of colors in a pattern where some of the dots lie alone and others overlap. If you for example try to change the hue of all reds you might only be able to target where the yellow and magenta inks are overlapping, not where yellow and magenta dots lie closely together.

When scanning materials which have already been commercially printed, there is a very high possibility of running into a moiré pattern.

A moiré is an undesirable "checker" pattern which is created when the existing dot screen of the printed piece being scanned conflicts with the screen in the scan being printed.

Descreening in scanning software is typically there to help avoid a moiré. You can also often simply scan a printed image at an angle, generally between 20° and 45°, and that will often read the existing screen in the image better, resulting is less of a moiré.

Then merely straighten the image in whatever software you are using for editing.

No idea how badly your descreening works.

Your linked "Small" file is full of repeating colored pattern. Without having the original as paper in my hands I cannot decide is the pattern printed or did it pop up as an interference result of the print color dot grid and the pixel grid of the scanner (=Moire effect).

But I can fade a great part of the pattern by applying noise reduction filtering. Selectable noise sample based filtering is a good bet because it gives a possibility to show what is the unwanted content. This one is NeatImage (freeware), only a partial selection to show the effect with maximum settings: 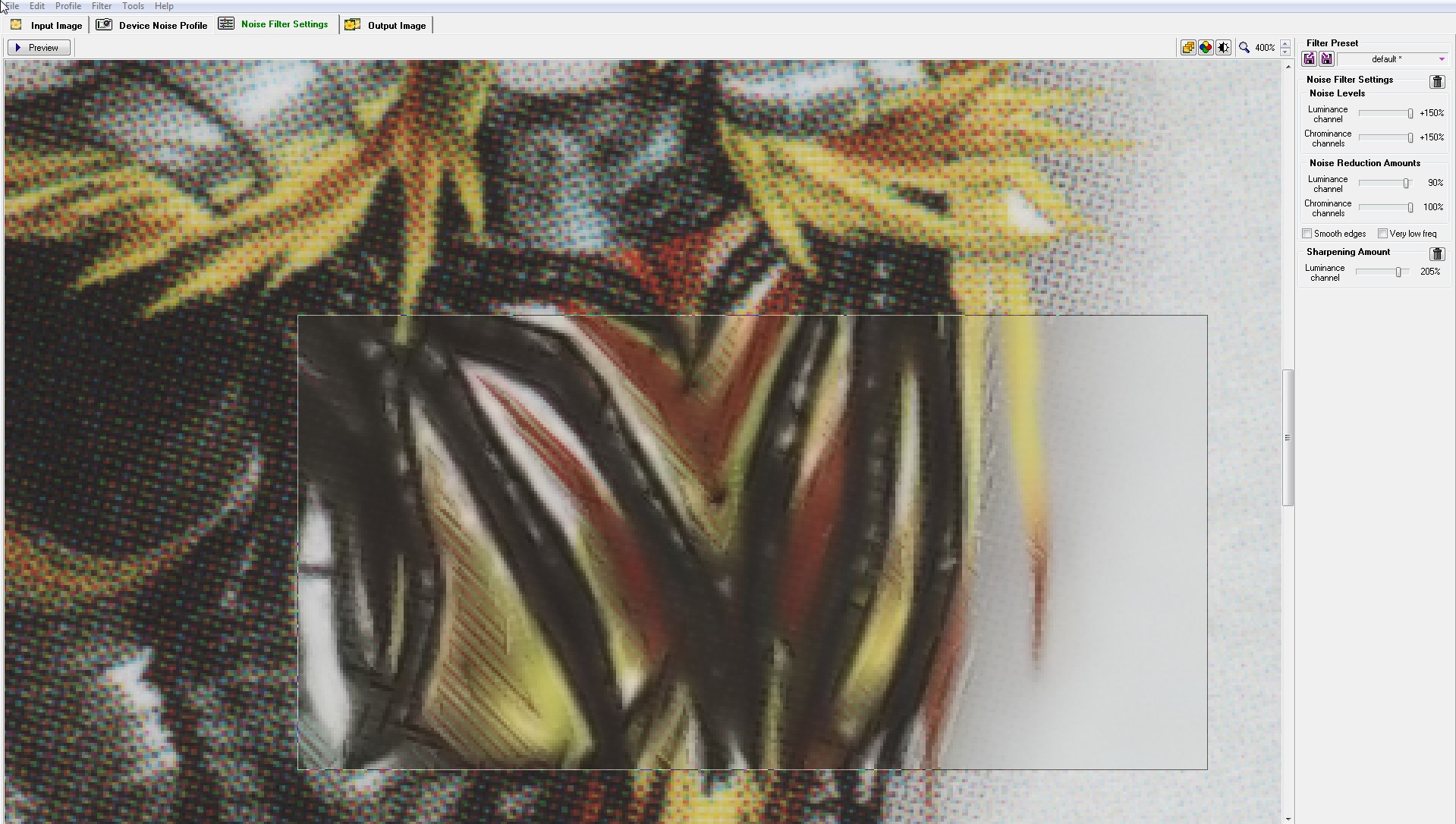 The next image shows in the left half the original. The right half has got the noise reduction and a little more contrast in Photoshop. 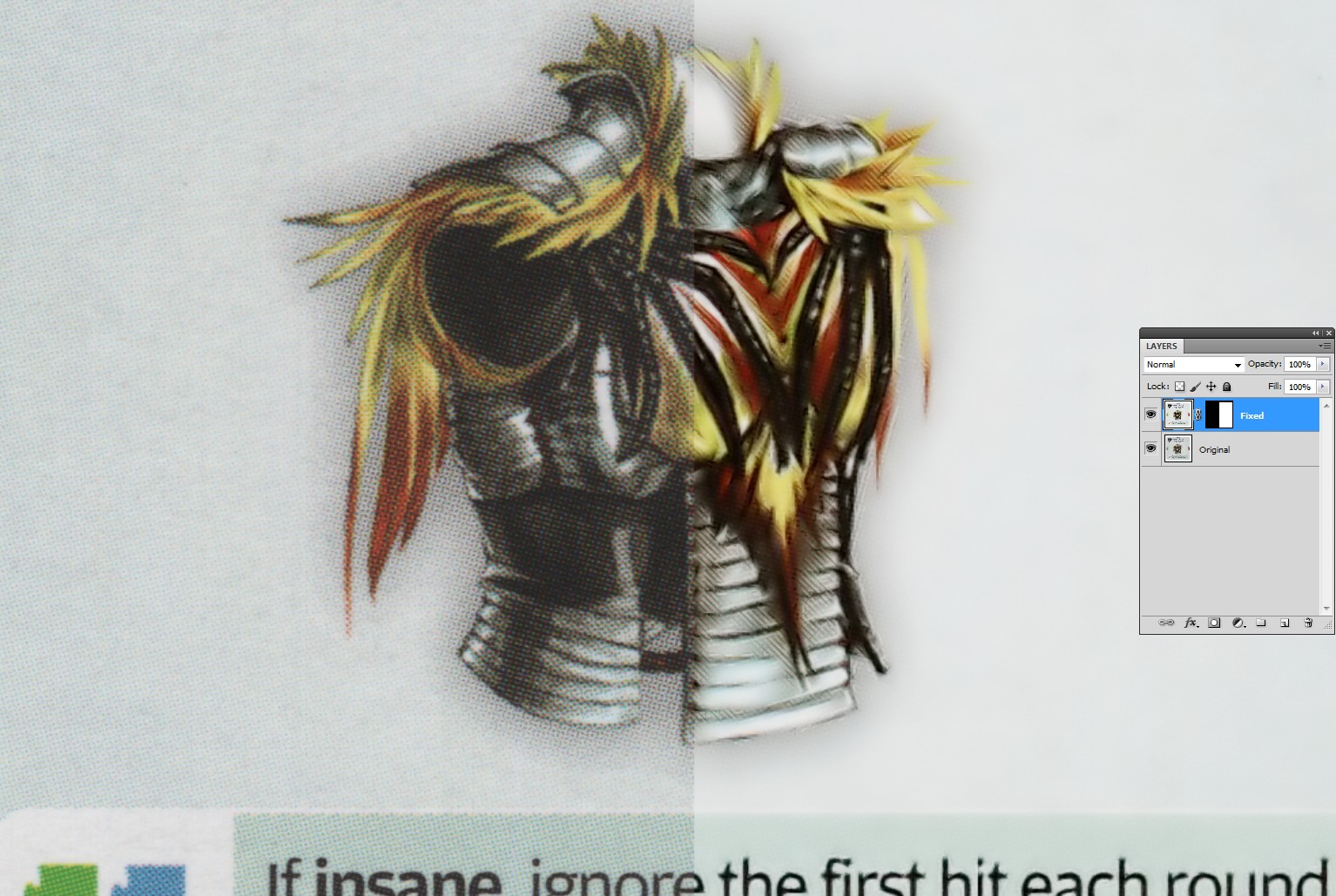 The texts would become far better by retyping.

There's some commercial garbage removing tools which do not reveal how they work, they simply work. Redfield Perfectum seems to be especially clever. It's a Photoshop Plugin and it makes this: 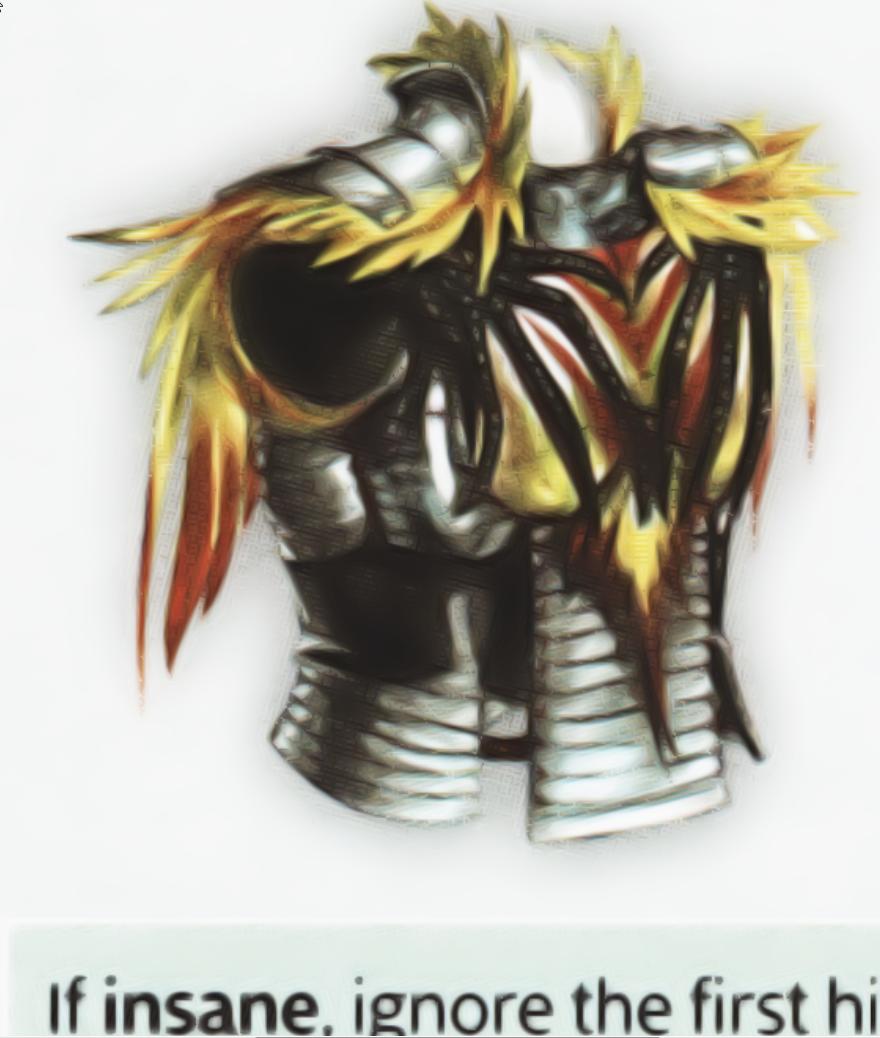 Contrast is increased manually afterwards. The result is a bit fuzzy, but 2 px unsharp mask fixes it: 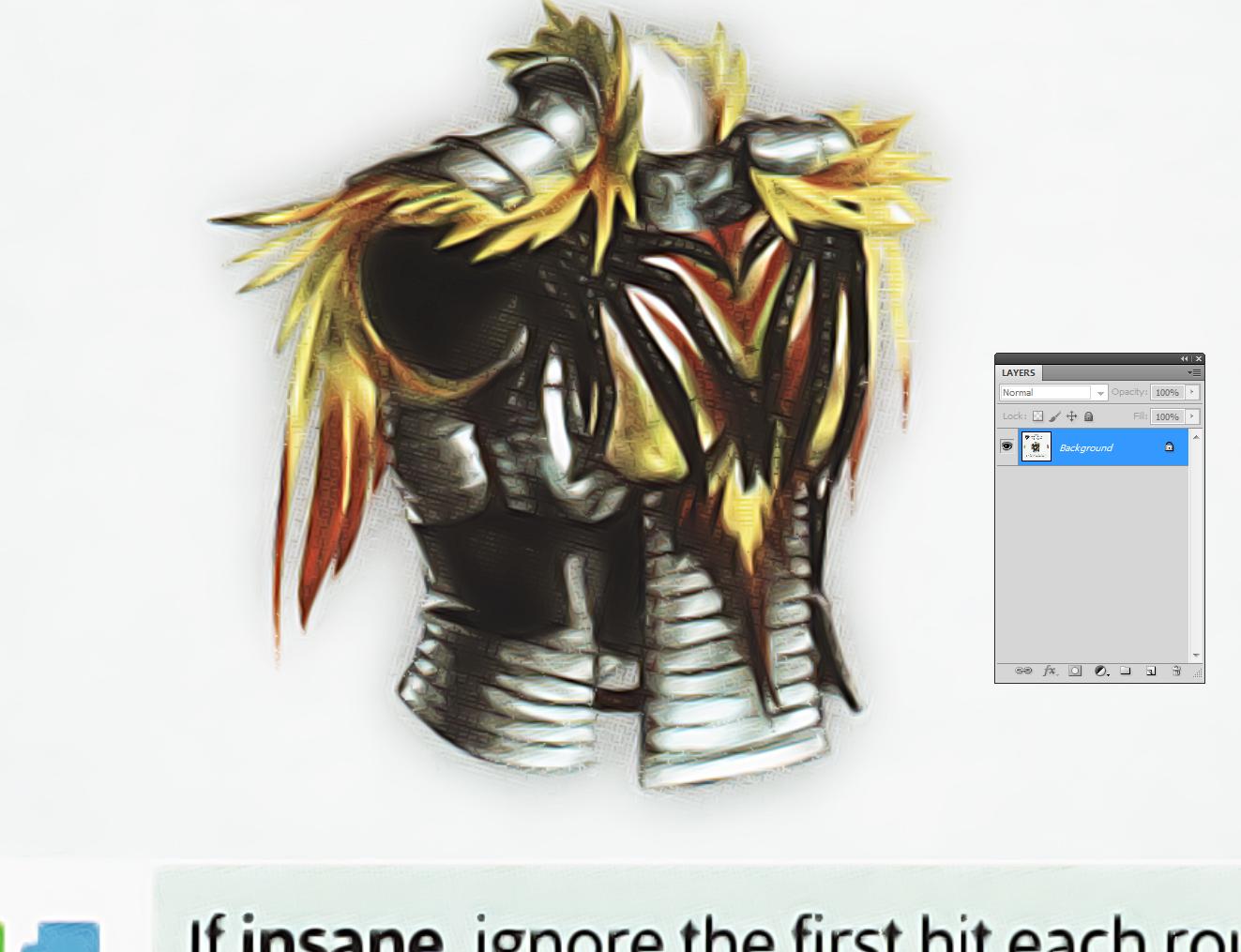 8
How can I determine which drawing tablet is right for me?
4
Inkjet Printing on plastic
4
Identifying printing quality issues
0
Same Illustration needs to be printed at 2 sizes
1
Optical Resolution vs. Print Quality When Scanning Art for Traditional Offset Printing
11
Printing: will a font always give exactly the same result, regardless of how it's printed?
0
Help me translate what the printing shop is telling me
3
How to remove paper pattern from high-res watercolor scans (batch)