Can someone explain this perspective diagram in Loomis' book? 2 point perspective in 1pp? 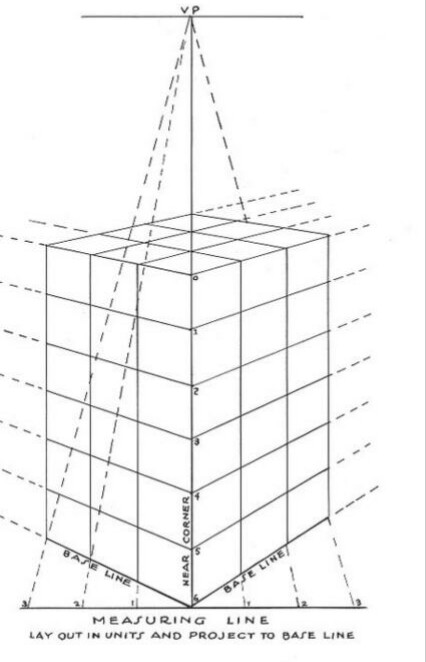 My knowledge/my theory for this question are:

Found the book (=Succesful drawing by A.Loomis) where the questioner's image was taken from.

This image shows a vertically standing rectangular box, which is divided to equal smaller boxes. The box has square bottom. The box is seen diagonally, the nearest and the most distant corners are on the same sight line. It's drawn with 2-point perspective - the image plane is vertical, there's no top nor bottom vanishing point. Left and right vanishing points are out of the image.

The idea of the image is to show how to get apparently right horizontal division to equal parts. The bottom measuring line, the top vanishing point (must be on the horizon line!!!!) and the dashed measuring rays divide the visible sides of the bottom square. The horizontal division is extended vertically from the bottom to the top with vertical lines. It's OK because all vertical lines of the target stay vertical in a 2-point perspective drawing.

The vertical division to equal parts can be drawn in 2-point perspective by using the same unit along a vertical line, there's no shortening upwards nor downwards. This image shows an example of it. The vertical scale is drawn on the nearest vertical edge. More distant vertical lines, of course have shortened scale, but the division is also there uniform due the 2-pt perspective.

But one complex thing - how to get the same length unit for horizontal and vertical divisions of the box is coldly skipped. The vertical division in this image is eyeballed i.e. drawn as the artist happens to feel right. Or it's got with some method from elsewhere. There's absolutely no mention in the image nor in the accompanying text of does the used vertical division make the box divided to equal cubes or not.

Eyeballing some perspective aspects doesn't make the book crap. The book is for persons who have the ability to make successful eyeballing. Otherwise the wouldn't learn to draw. More rigorous on math based perspective drawing methods can be found. I guess the questioner knows their existence, because his question seems to be based on an apparent contradiction between the shown image and the common 2 measuring point method.

The 2 measuring point method to get consistent horizontal and vertical lengths and distances in images looks simple enough to be practiced at least in 2-pt perspective, but the math behind it is tricky. For me the easiest method is to make a 3D model, but that's useless for those who want paint or draw manually.

If I was forced to draw perspective images manually I would construct the image with sight lines in 2 perpendicular projections. That's the old engineering way. It also would probably be useless for an artist because the needed top and side view engineering drawings do not exist. The artist creates something new as he draws, so the perspective drawing tricks must work on his drawing paper.

One example which uses a rigorous method to get the dimensions right:

The next image shows a diagonal view perspective image of a square. It's constructed artistically - not a slightest idea how long is the side of the square. The vanishing points are both placed on the horizon line as far (=S) from the center to make it present a horizontal square seen diagonally.

The next goal is to continue and extrude this square to cube. The image should use only 2-pt perspective. That means both the image plane and the extrusion direction are vertical. For simplicity let the nearest corner of the square be on the image plane.

Now the problem is how high should the nearest vertical edge be in the image if it's a cube? Someone may think that the drawn horizontal projection X of the edge of the square could be used somehow, maybe cleverly scaled. It can work as is if the viewing direction is right, but for this exaggerated perspective it looks too short.

Tiresome triangle proportion calculations in the 3D scene of the perspective image construction with sight lines show, that the length of the edges of the actual square can be calculated from this perspective drawing. Assuming that the nearest corner is on the image plane (+tricky triangle math) give the next formula for the square edge length A:

In this drawing X = 32,0 millimeters and S = 68,5 millimeters. The calculated square side length A = 85,4 millimeters. That A should be the height of the cube and the nearest edge which is on the image plane should be drawn 85,4 mm high. 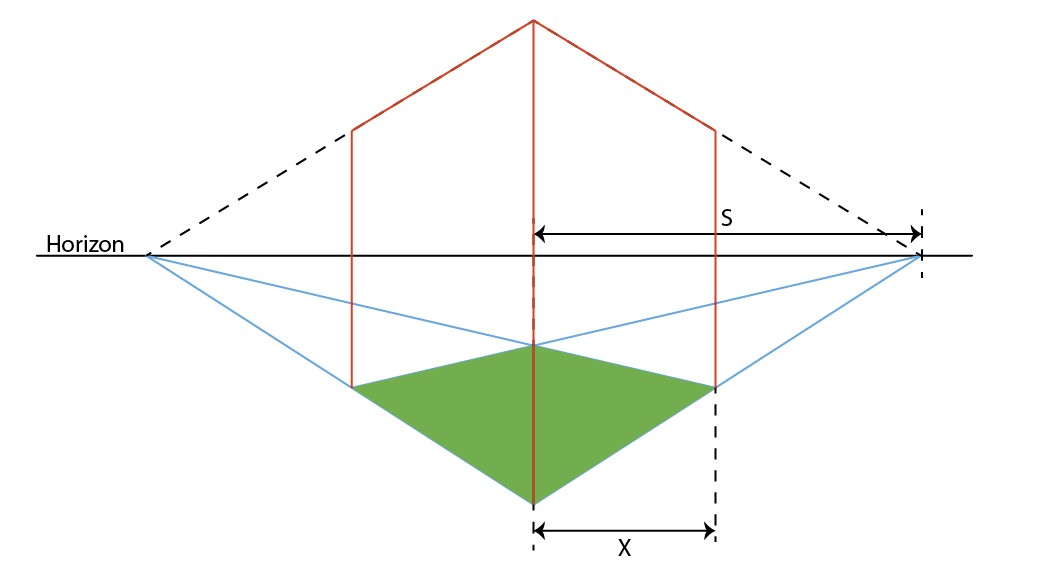 The image looks very distorted, but a quick check in a 3D CAD program gave the same result. The blue cube has edge length = 85,4 mm. The 2-point perspective drawing is made with sight lines. The drawing session image: 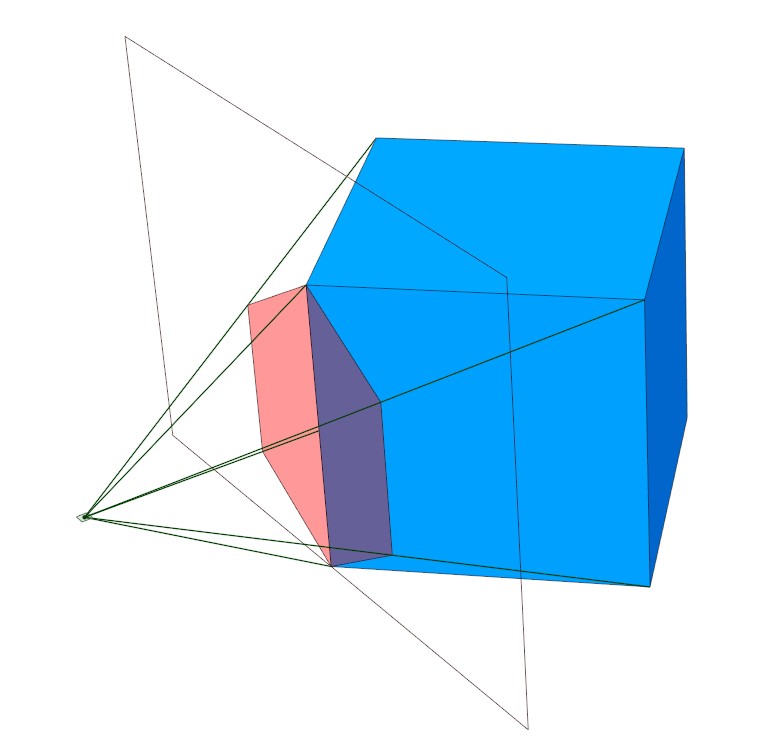 The straight on the face image with no extras: 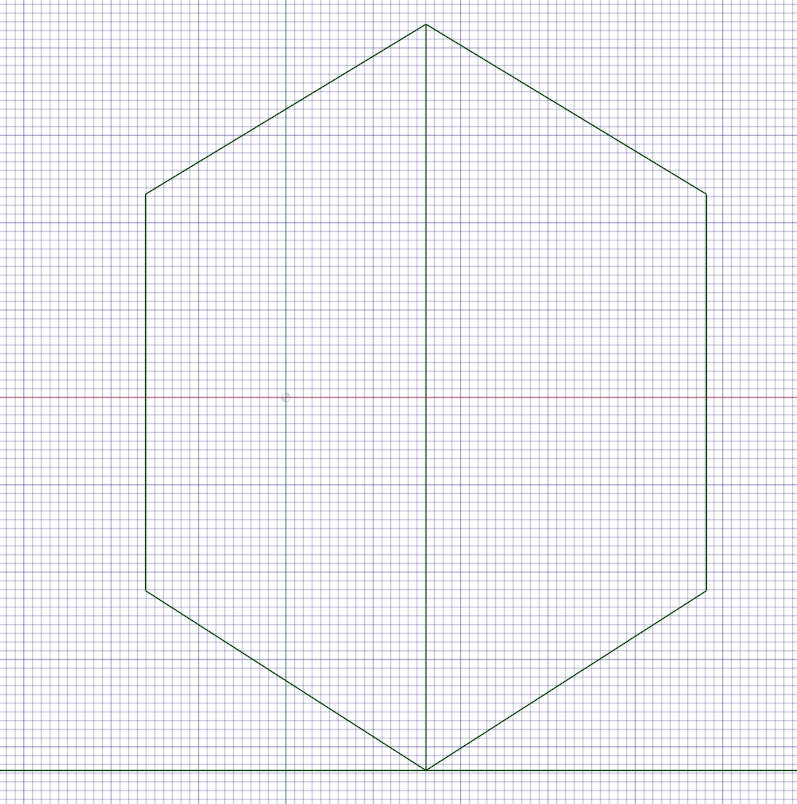 The grid spacing is 1 mm.

NOTE1: the formula looks not at all demonstrative of what it presents. But it's got with proportionality theorems of triangles and contains only things which exist in the drawing. So a line pattern which fulfills the same proportionality must very likely be possible to insert with a ruler and compass directly to the perspective drawing. The established simple to use drawing-only way to find the edge length of the already in 2-pt perspective drawn square is known as the measurement (or measure-) point method. It covers also other cases than the symmetric diagonal view. The method is thoroughly described here: https://www.handprint.com/HP/WCL/perspect3.html

BTW. The method is described thoroughly but the explanation is complex. It becomes nearly trivial when one watches a 3D image of the perspective imaging session. 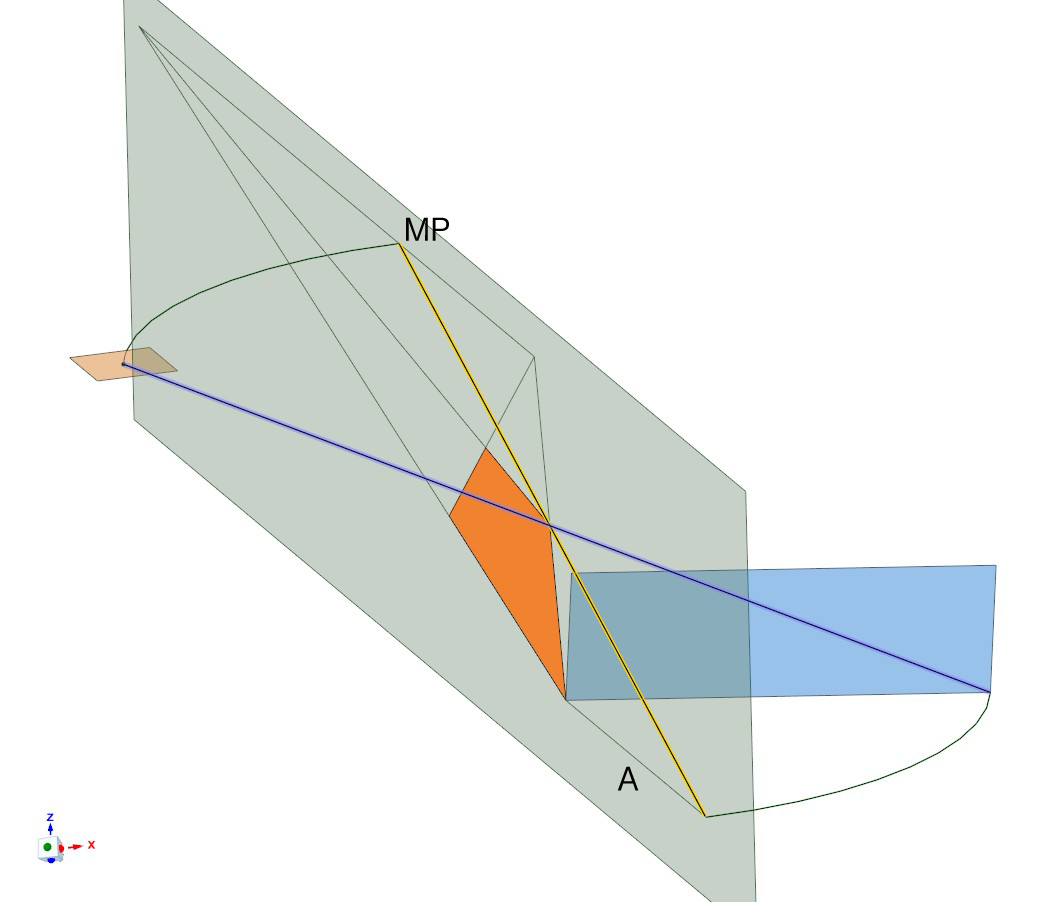 To add a bit to the discussion 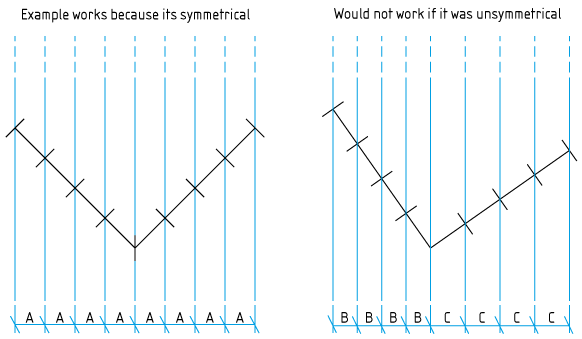 Since lines that are parallel in a plan view are going to same vanishing point. Then it is clear that what Loomis has drawn is correct. Assuming: