I am trying to change the color of this image in photoshop with this color: #1B2D40 I followed the tutorials on this post: Changing hex color of a graphic,

However, this didn't seem to work to replace the color exactly because of the white and black shadows in this image. How do I change the color without affecting the shading? 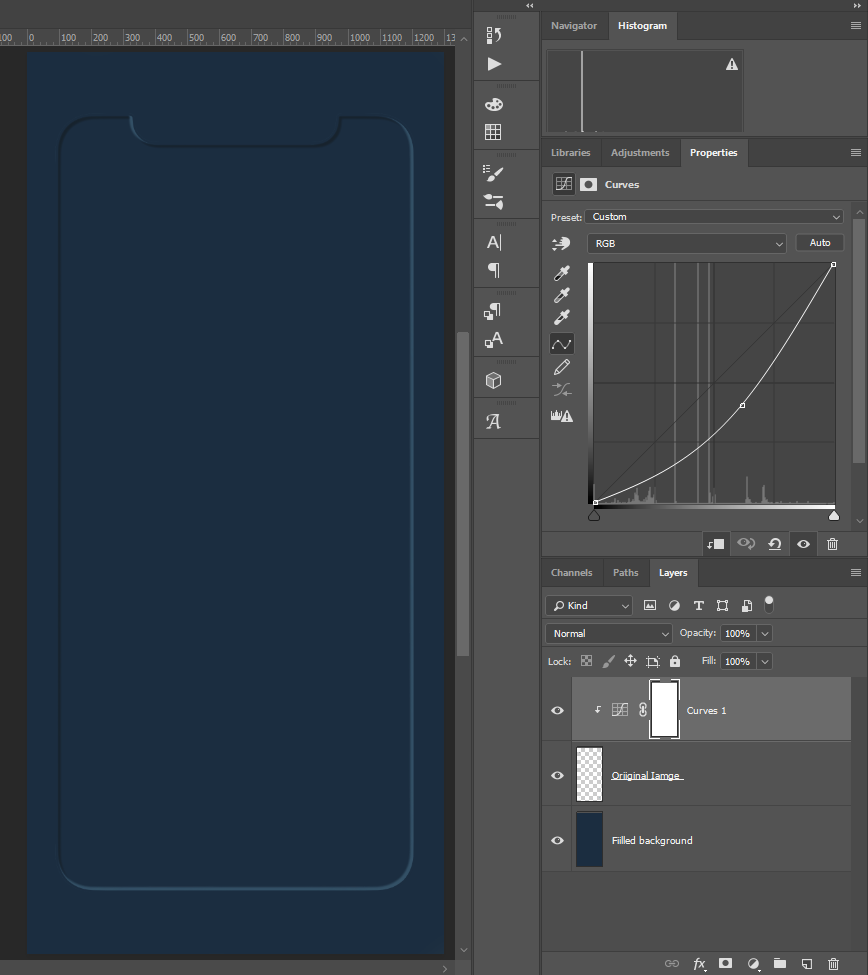 There should be some light and shadows - I guess you do not want a flat solid rectangle filled by #1b2d40.

One idea is to insert light and shadow to a flat solid layer of the wanted color just in the areas which make it have those relief edges. Blending mode Hard Light can as well insert and subtract light, so we prepare a masked grey layer "Relief" which brightens and darkens only the edges:

Making the "Relief" starts by making a desaturated version of the original and by marking how much different points differ from the average:

There's a desaturated version of the original and its duplicate which has got filtering Blur > Average and blending mode Difference. On the top there's a Curves layer which stretches the contrast from black to white. NOTE: some grey must still stay, it cannot be too steep curve!

We use the result as "Shading Mask". We duplicate top three layers and merge the duplicates. The average layer can be deleted. We reuse the adjustment layer and the desaturated layer to make a good contrast version which can be used to give the edges to the wanted color layer:

The "Shading Mask" layer is copied to the layer mask of the desaturated layer (see NOTE2).

The curves adjustment layer has "the next layer only" switch ON. The curve is adjusted for good looking contrast purely visually. In the beginning the adjustment layer was merged with the desaturated layer to keep the story simple-looking. The merged layer was named to "Relief".

NOTE2: If you insert a layer mask and Alt+Click the mask icon in the Layers panel you get the mask on the screen for edits. You should copy and paste the prepared layer "Shading Mask".

Not the answer you're looking for? Browse other questions tagged adobe-photoshop color hex or ask your own question.

8
Changing hex color of a graphic

3
Under the U.S.'s Copyright Law, is it an act of copyright infringement if we changed the color of another artist's image to black and white?
1
How do I change all instances of a color to another in photoshop?
2
Change black background of image to a color
1
Change colors of linked Illustrator image from InDesign
2
gimp change colors in 2-color image
8
Changing hex color of a graphic
0
How to remove cloth pattern and change color but keep shadows?
0
If an image has text in it, how can I change the background color of the image?
1
How to replace a VERY specific color (HEX code) for another one in Photoshop?