I'm trying to rotate a color in a photo of a house with quite a bit of shading to white (actually, a slight gray would be better).

For example, in this photo taken from a website: How would I change the color of the blue shutters and Adirondack chairs to white, to match the window trim?

I can easily make the shutters and chairs to pretty much any other color using Color Rotate. For example, I can make them red by setting to source to ~215-255 and destination to ~0-17. 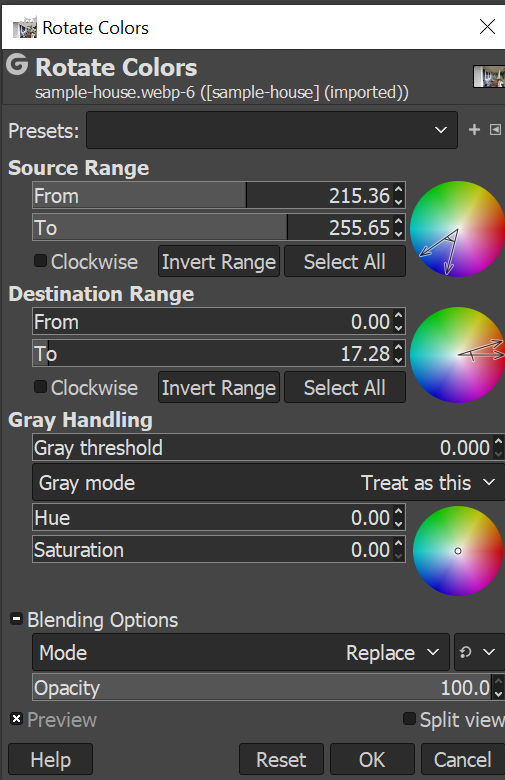 I have attempted to adjust the gray mode, but not yet gotten it to work.

Forget pure color based approach - in real photos there's so much noise that you do not get the effect limited to the wanted blue parts.

Bite the bullet. Make a layer duplicate and remove there all except the parts you want to make white. Draw a path or use other background removal methods. The challenge isn't impossible, but you may need to practice a while and watch tutorials if you are a beginner.

All kind of color and contrast based ultrafast background removal tricks fail miserably if the target isn't especially prepared just for that trick. I have found that generally with unprepared photos drawing a path is the only universal method to select the wanted area. GIMP's lasso can be considered as a simplified variation of path drawing because it allows as well clicks, dragging and undoing.

I deleted nothing. I made a lasso selection and copied 2 foreground items to a new layer for processing: 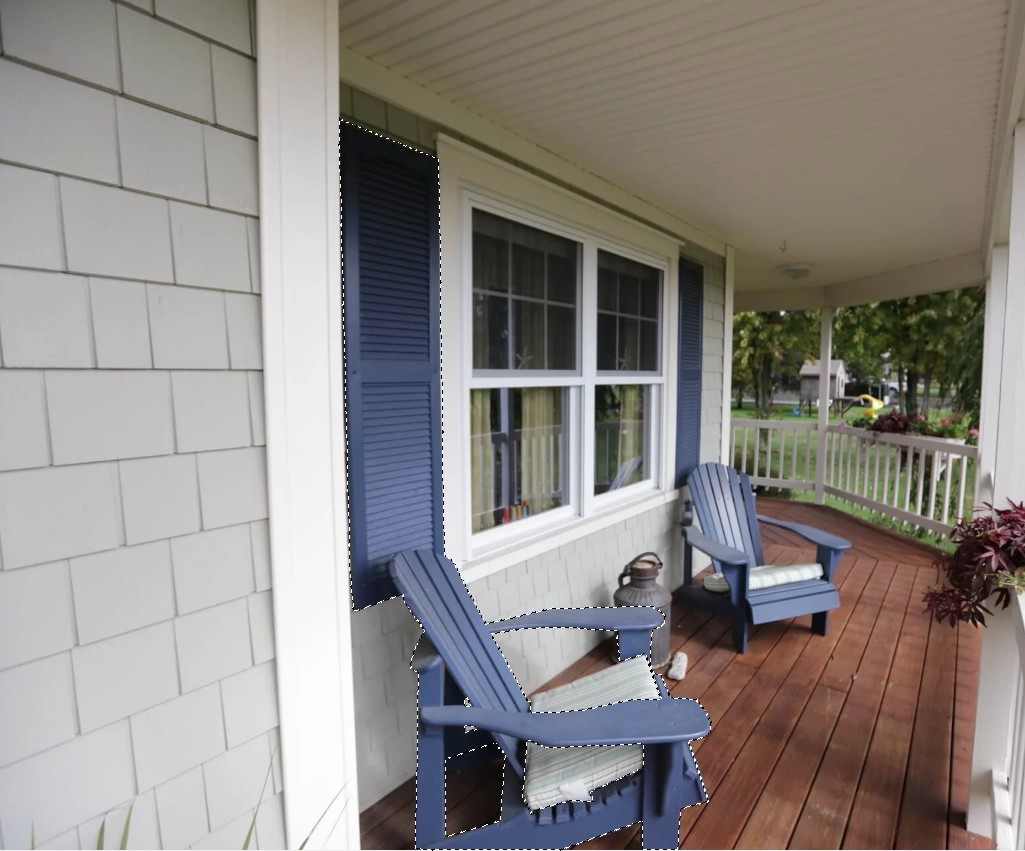 The copied items were desaturated with the Mono Mixer which allows to search good contrast, too. I see it's better than the simple desaturate. 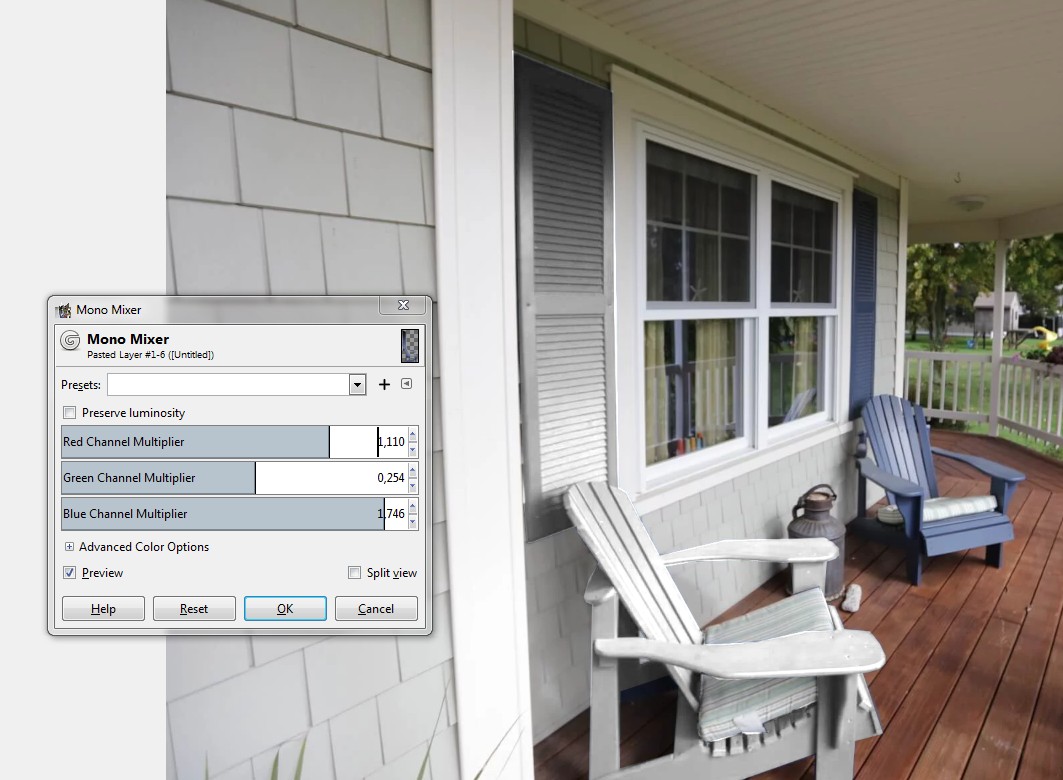 Unfortunately the original photo has got an unknown amount of fixes before me, maybe already in the camera and the mono mixer couldn't fade the obscure higher contrast than what the white parts have (see NOTE2). The dark areas need more light.

In GIMP it's a good idea to have a spare copy because there's no adjustment layers. So, the greyish parts are duplicated and brightened with curves. Do not get disturbed by the apparent overexposure of the already white looking areas. It will be fixed soon: 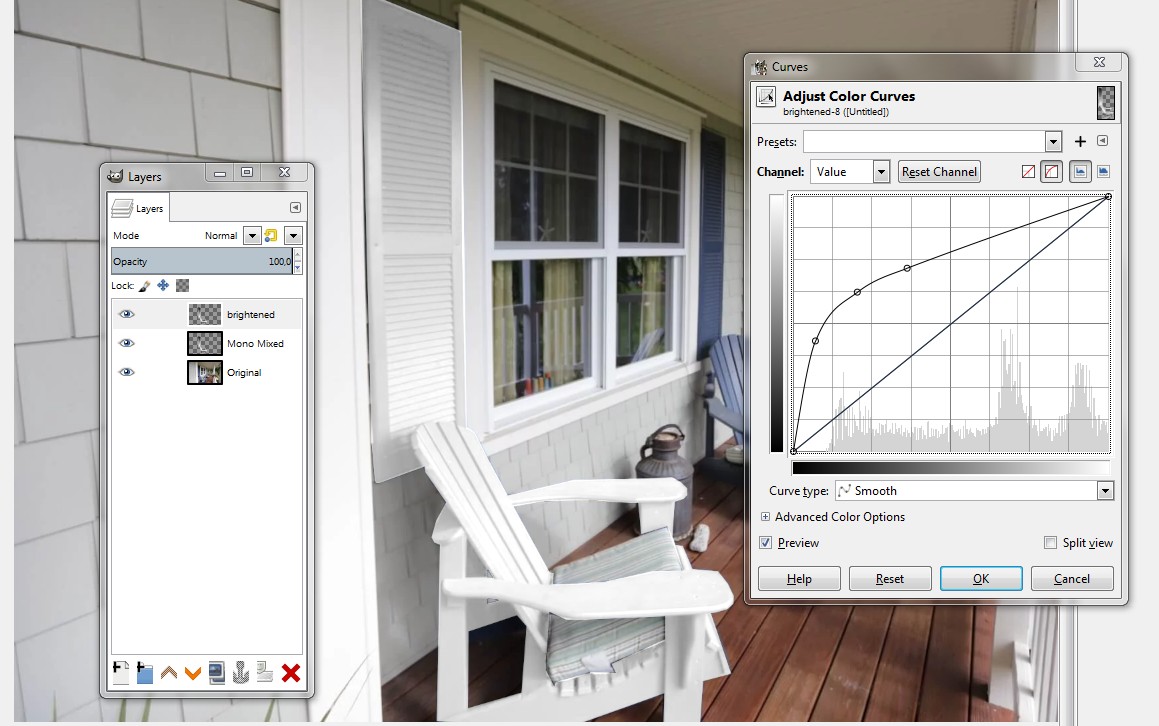 The top edge of the window shutter is lifted to approximately to as bright as the adjacent white panel. If a slight grey is better than white, leave all darker. I made it white. My opinion is "let the bricks be grey, let the painted items be white!"

Unfortunately the white in the original window panel is brownish because it gets brown light from the floor. The window shutter needs colorizing. A copy is made and Colorize is applied. The color sample is taken from the brownish panel and the saturation and lightness sliders are adjusted visually: 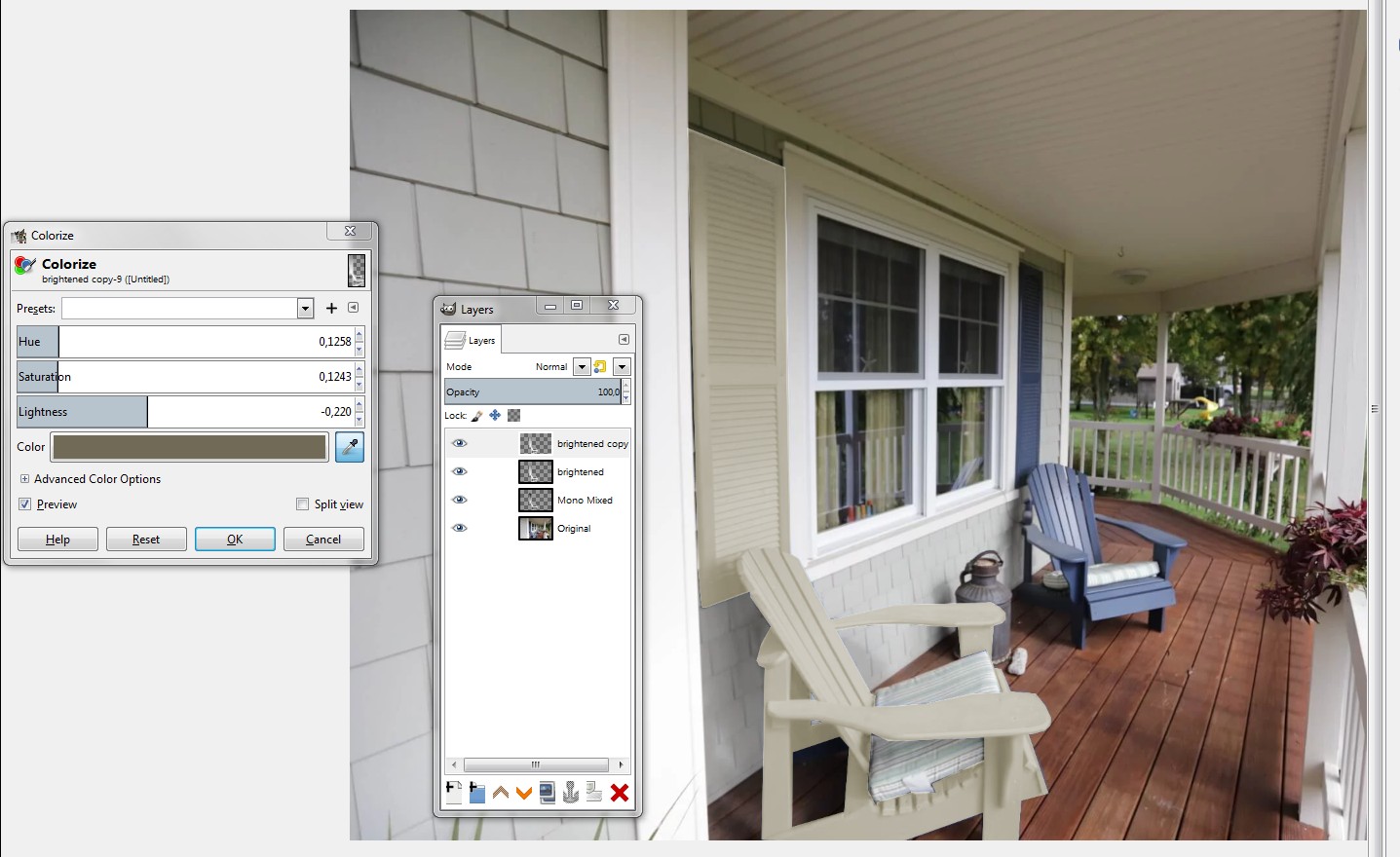 Colorizing the whole items can be fixed by adding a layer mask, It was originally black, but a little white is painted with soft brush to the mask to leave a good amount of the brown color (see NOTE1): 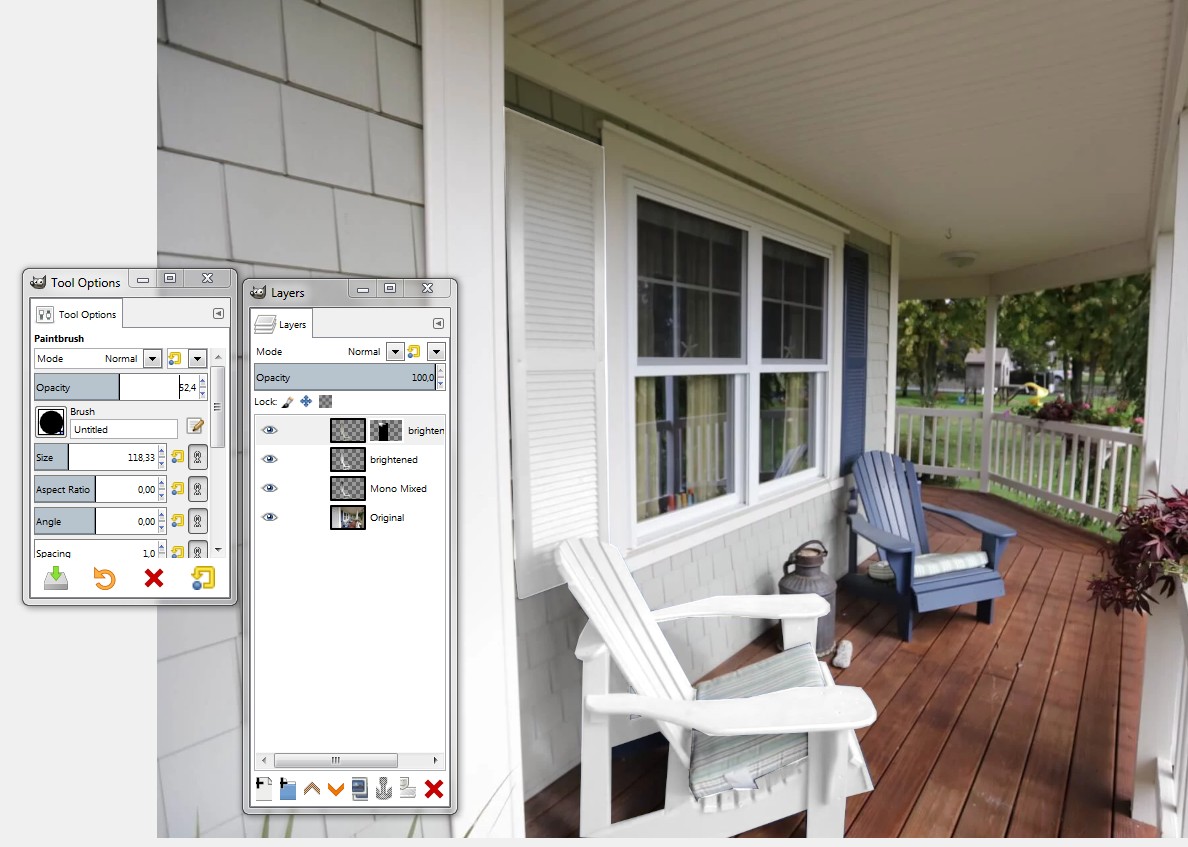 The overexposure is fixed in the same way. Mostly the whitening was good, the layer mask is mostly white, a little black is inserted on the few too bright areas with a soft low opacity brush: 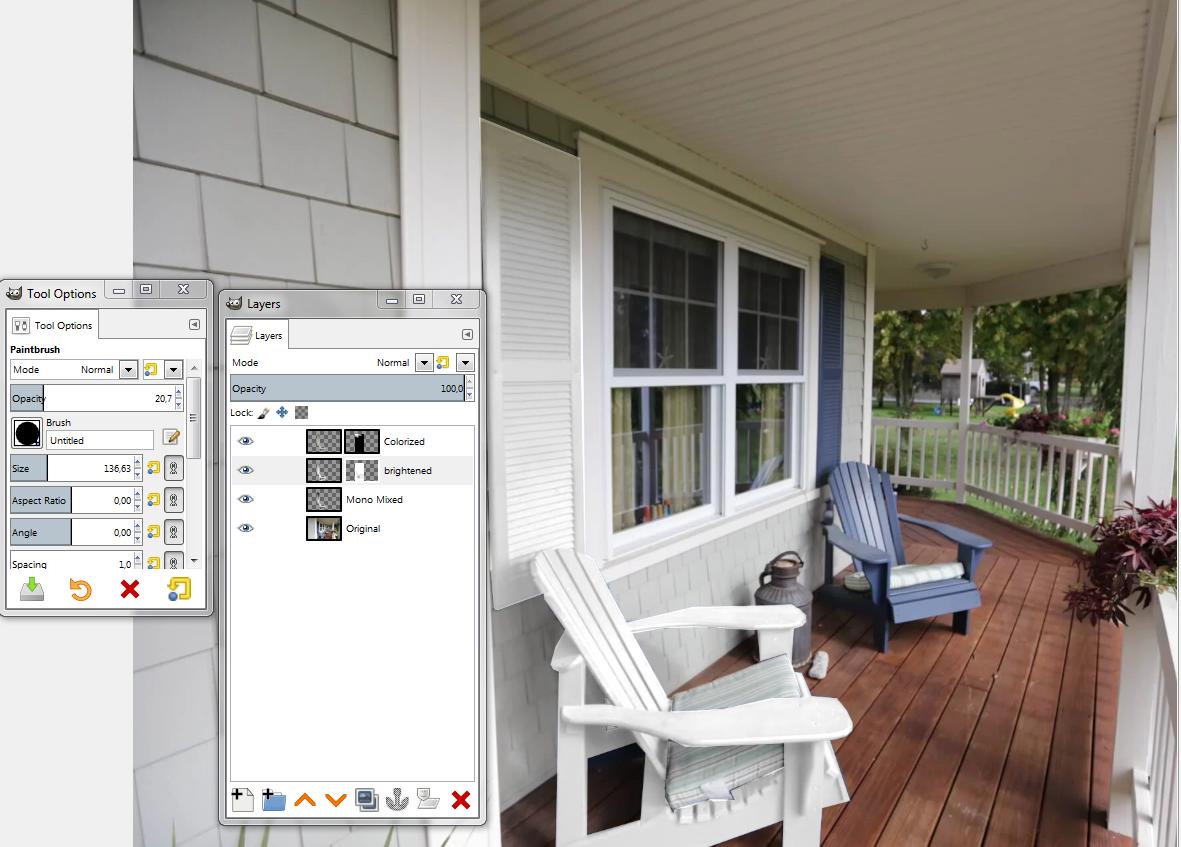 The very light pillow on the chair maybe wants to be colorized to make it more visible.

NOTE1: another way would be to desaturate the reflected brown in the white areas. It's not more wrong because the image is already a lie. But we have different ways to make it look plausible.

NOTE2: In theory it can be the light. The brown (=orange) reflection from the floor give something back from white items, but blue returns much less. I do not believe this is the only reason. I guess this photo has got numerous adjustments before me.

8
How to change all pixels in Gimp that are not one of two colors to white?
2
gimp change colors in 2-color image
12
How to convert color images to black & white in GIMP?
3
Pantone Color Bridge vs CMYK Color Guide
1
How to effectively replace color from a range?
2
Gimp: Change a signature color from black to blue, preserving the tones
0
How to color an image with black without losing texture or detail
3
change white object's color
0
mimic scanner noise with a painting tool
7
How to apply chroma keying (remove green screen)?