How can I wrap my text objects around a circle without warping it?

I've been asked by a client to wrap his logo in a circular fashion like the example below.

My issue is that his logo is not a typeface, but instead a group of objects, so I can't use the type tool to wrap his logo around a circle. When I try to use the warp effects, the letters are also warped (which I don't want) I want my letters to still stay the same, just rotated around a circle like the example above. The only thing I can thing of doing is rotating each object individually, but that would take forever. Is there a simple way to do this that I'm not thinking of? 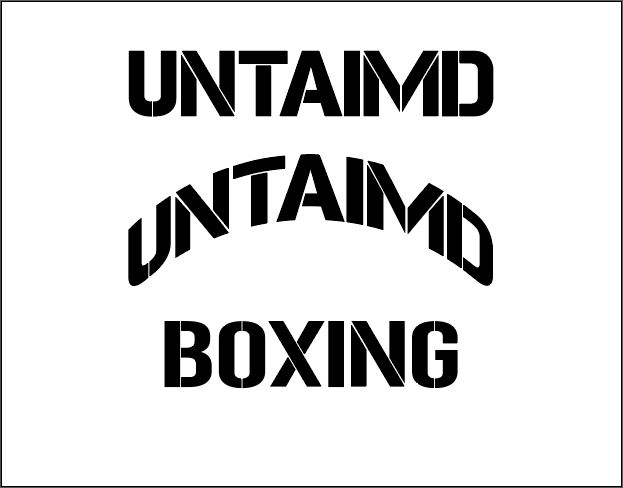 One can often simply use Object > Envelope Distort > Make with Warp... to achieve this. 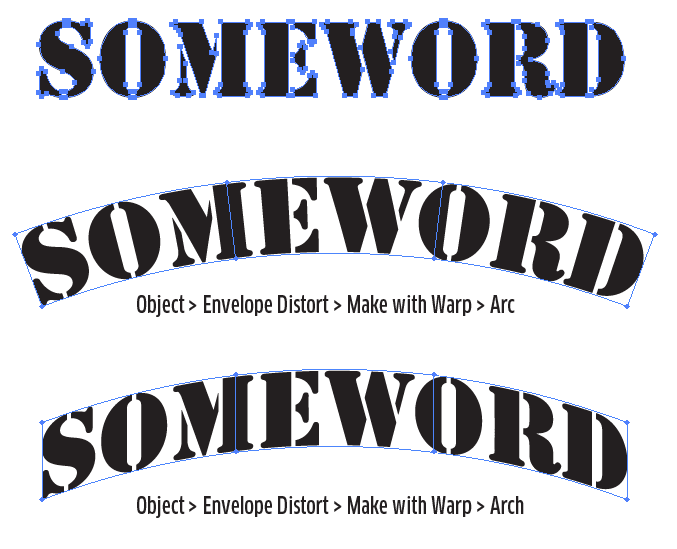 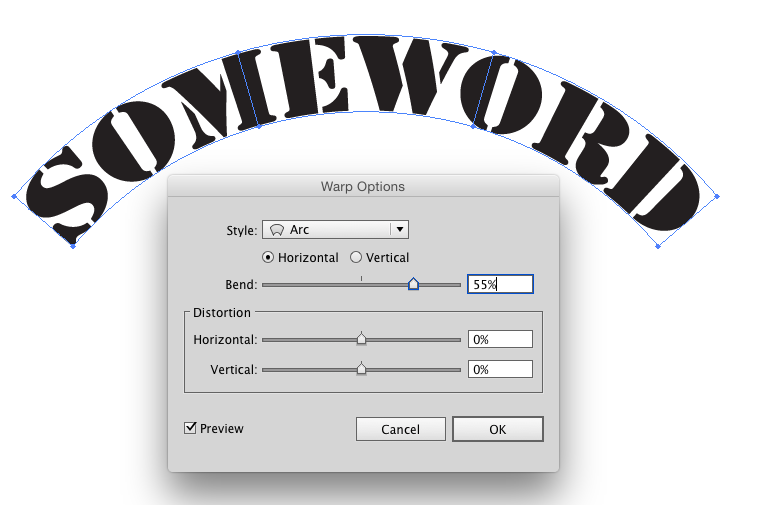 I would use InDesign's Type on a Path Tool for this. A nice feature of InDesign is that it allows you to paste any object inside a text frame and treat them like ordinary characters.

First you need to make sure that the parts of the individual letters are grouped so each letter is one object.

In principle the objects need to have the same baseline. As you might notice, the U is a tiny bit taller than the other letters. This can be countered by grouping each letter with a transparent frame with the same height as the tallest letter. In this case we will just eyeball it later.

Draw a circle, click it with Type on a Path Tool, set text alignment to Align center, move the center indicator of the circle to the center. Then copy/paste each individual letter into the type on a path.

Now you can manipulate with the letters as if they were ordinary type. Having the letters close when on a circle can look strange, so I add some Tracking. The U needs to be lowered a bit using Baseline Shift, and the Kerning must be adjusted between every letter to somehow resemble the original. This is done by placing the cursor between two letters, holding Alt and using the arrow keys to nudge the letters in place.

When you are satisfied with the result you can copy/paste it to Illustrator where it ends up in an annoying clipping mask which you need to release.

If you cannot get the original font used then you will have to do it manually. Any of the Envelope effects will distort the letters- also making a brush will do the same.

If you are stuck with having to use the Outlined Type (the Individual letter Objects) you can maintain the exact shape of each object and still rotate it around a circle fairly easily.

Ungroup the letter Objects so you can move them individually and use a remote reference point for the Rotate Tool. I used some guide shapes- the letter spacing you will have to just eyeball.

I wrote a comment about the Mighty logo. It has distorted letters, but let's assume you have already got an order to keep the letters undistorted.

Making it in a typographically pleasant way would be easiest if you had as wide and as heavy looking font and you used Indesign's Type on Path tool. In practice it should be the same that was used as the starting point when your letters were made by cutting holes. Otherwise it doesn't offer any fine typography benefits.

After typing the text you simply could place your shapes one by one in the same places and rotated as much with big zoom. I guess Indesign has so much serious typographic knowledge behind it that it's very difficult to beat the result without years of practicing.

If you simply want to rotate and place your shapes on a circle you already have got one suggestion. I have another variant:

Your text (sorry for my bad copies) is here about 150mm wide and 27mm high:

I am not sure how many degrees wide sector of a circle you want to be covered, but I guess you want sector angle S = 90 degrees.

If the bottom line of the text should sit on the circle curve with the same spacing as in your horizontal version you'll need a circle which has diameter D=(W/Pi)(360 degrees/S).

Many letters are narrow in the bottom, so the diameter very likely should be smaller. You must subtract some amount from that theoretical diameter. My first guess is to subtract the height of the letters. So, the formula for the diameter will be

Using the first version of diameter without subtraction (=190 mm) makes too sparse looking result. The other extreme is to pack the bottoms of the letters:

We'll try both D=164 mm and D=148 mm. Calculated D can be used as shown in the answer of user Kyle, but you can also calculate how much the letters should be rotated based on the average available sector space.

In the next image there's on the top right the letters rotated one by one and in the bottom they are placed by eye and having Smart Guides ON onto a circle which has diameter 164 mm. 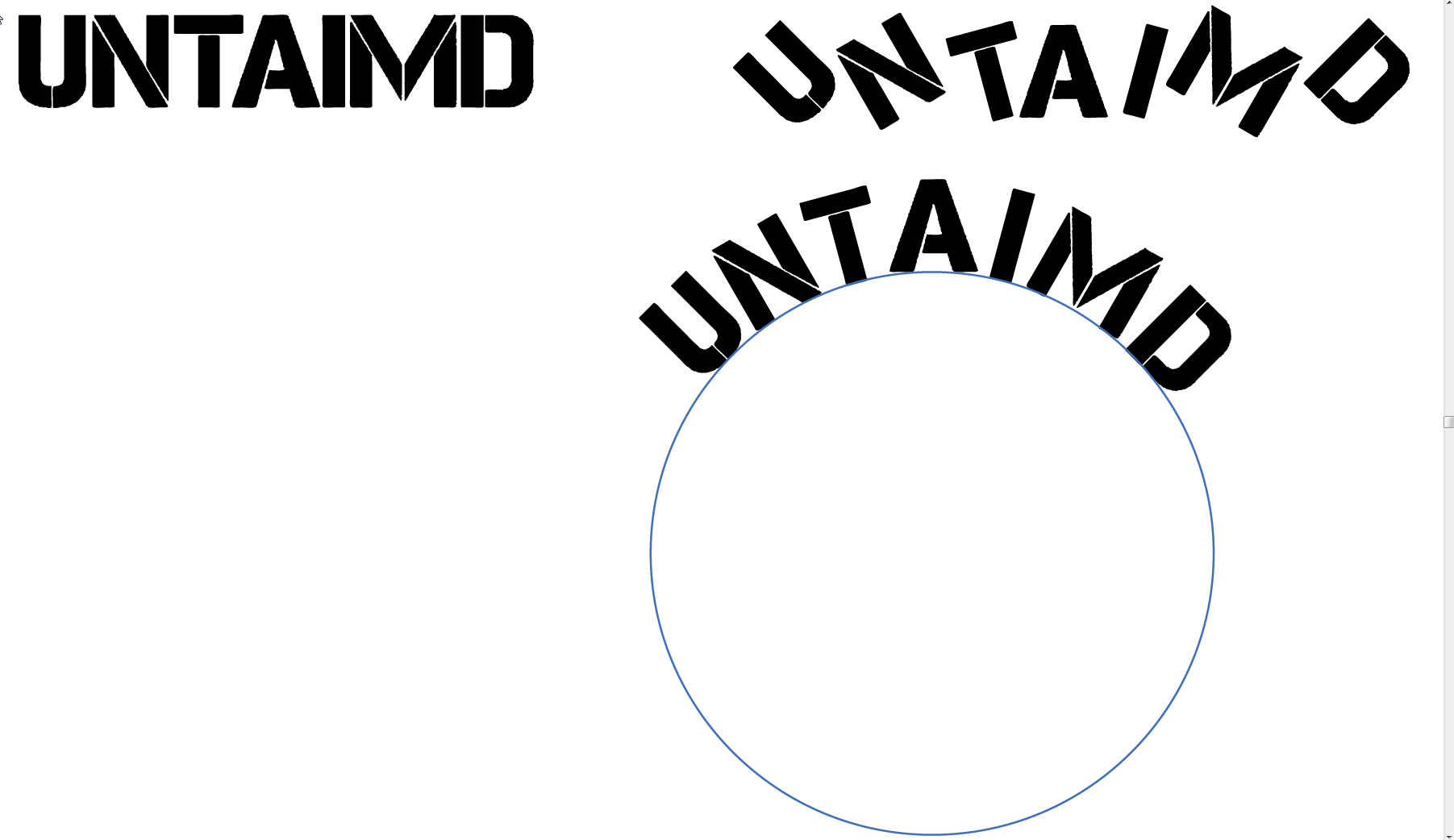 I said: "Sounds idiotic" because it isn't symmetric if the middle A stands straight, as you easily see:

U has clearly higher elevation than D in the right. We can try to fix it by rotating a little counterclockwise, but for me it looks worse because the A is tilted:

Well try also D=148 mm. It has the same symmetry error, but it doesn't look too tight:

8
Multiple objects spaced evenly around a circle
5
Ideal way to wrap a label around a bottle (3d extrude?)
0
Illustrator: How to make small balls (objects) wrap around text
2
How can I create rounded corners In Adobe Illustrator in a specific way?
3
How do I wrap text around a cylinder in Illustrator?
3
How to bend a path along an arc (or any shaped path)?
4
I want to warp text in a custom shape but I don't want it to be distorted
0
illustrator CS6: can't wrap text around object
1
How to wrap rectangle around circle
5
creating recursive, self-similar patterns with Adobe Illustrator