How to cut an Image on inkscape

How to remove a shape from an image?

It's a simple question but also googling it I can't find a solution.

Concentrate attentions to the Image to explain the problem
As a result I would like to have two circles,

How can I achieve this? It's simply but I don't know how to make it 🙁

Ps: if you think this question is useful and well written, do not hesitate to put an upvote, thanks

Inverted clipping path deletes nothing, it makes a part transparent.

The presented solution doesn't solve your actual problem, it solves only the green and black circle case, Bitmap images need something else.

This does the job 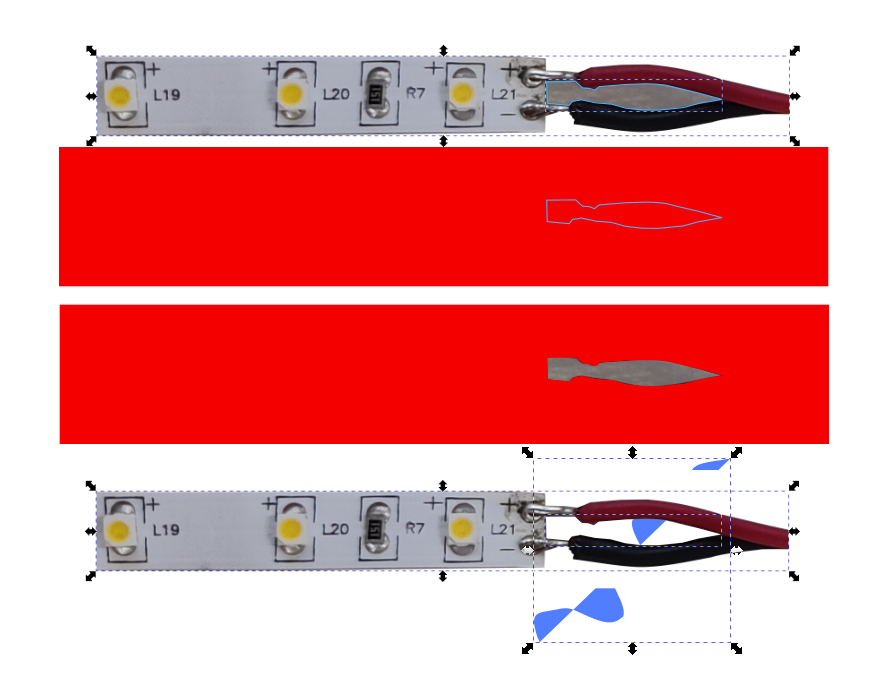 Draw a path (=blue) along the edge

Insert a big rectangle (=red) between the photo and the drawn rectangle. Beware moving the path or photo.

Subtract the blue path from the rectangle (=Path > Difference)

Select the photo and the rectangle with hole, apply Object > Clip > Set

I inserted some blue garbage under the result to show there's a hole.

I guess a white cover drawn over the photo could also do the job if there's nothing else under the photo than white.

GIMP is the tool for photo editing. There a hole is made in seconds when there's good contrast. The next result took 10 seconds in GIMP. The grey between the wires and surrounding white were selected with the Fuzzy selection tool (=the magic wand) and DEL was pressed:

Not the answer you're looking for? Browse other questions tagged inkscape shapes or ask your own question.

4
How to create an outlined circle with centered horizontal and vertical gaps in Illustrator?
1
Remove/Cut Section from Image
7
Object dimensions change after filling with the Shape Builder Tool/Paint Bucket Tool
6
How do we cut multiple objects with multiple colors at the edge of a shape? Without clipping!
3
Inkscape: how to draw cased lines, or filled shapes with strokes that have their own fill
0
Erasing stroke on two separate segments of shape
0
Remove part of shape that's outside another shape
6
Critique of timeline aesthetic
1
Problems with path difference