How to digitized a sketch and to get soft lines?

To color in Photoshop my traditional sketches, I start by digitizing my drawing in autotracer.org, and I get a vector graphics as this one:

I like it, but I'd like to know if there's a way I can make the lines “less heavy” and to get a crayon texture.

(I don't have a drawing tablet, then I can't do it by simply lining it with a soft brush). 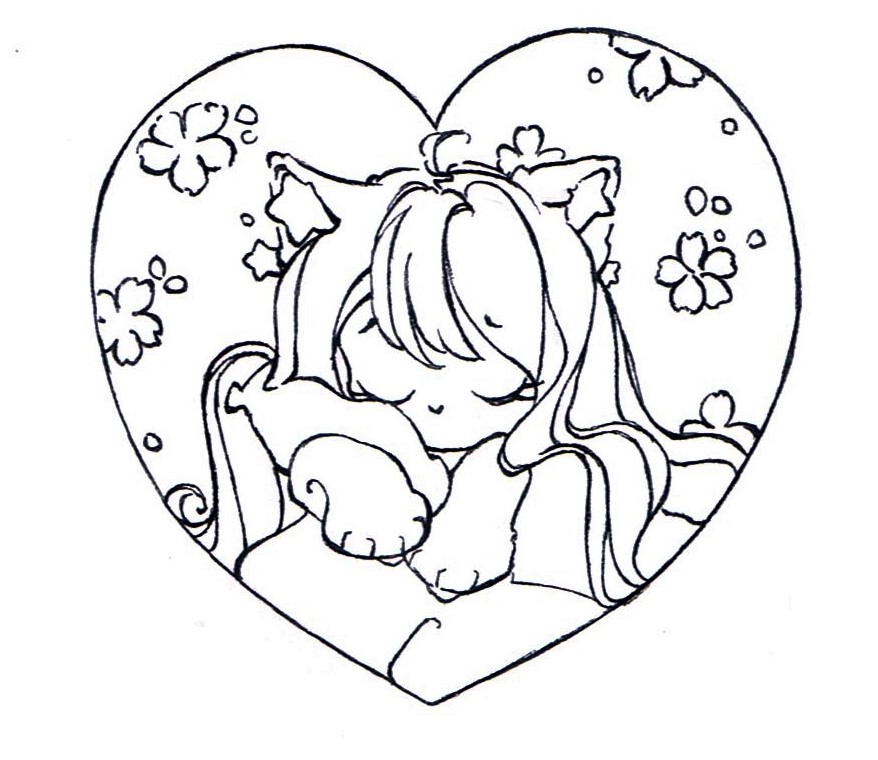 Your traced image has no lines, it's a complex compound path. The drawn lines are now (with black) filled areas, there's no vector strokes that could be changed (see NOTE1).

The consequence: Filled areas have no direction. No ordinary image editing program can decide how your hand had moved. The only way to recreate realistic manually drawn looking brush, pencil or crayon strokes is to draw them, but you already said that it's not possible because you do not have any computer hardware which obeys your hand.

If you can accept only changing the black color to some noisy texture you can proceed in Photoshop, Krita, GIMP or other program which has ability to insert noise and layer masks. An example:

I don't have your traced image, but I increased the pixel dimensions of your screenshot to 400% with Smilla Enlargener and added contrast to get somehow sharp version of your image.

Smilla guesses sharp edges quite succesfully, so it doesn't increase blurriness nor jagginess like usual image scaling methods do.

The scanned image with enough contrast would, of course be better for this route, tracing is here useless. This is made in Photoshop:

The image was inverted and used as layer mask. The layer has solid 50% grey fill which has got Filter > Noise > Add Noise > Monochrome

Layer mask refinement can be used to contract the width of the apparent lines:

The image I originally copied from your post was noisy, so increasing layer mask contrast pulls it up. It's applied here. To keep the image contrast good the layer fill is black and there's less noise. The mask refinement is used with maximum mask contrast and edges are shifted:

Colorizing your image is not possible with paint bucket due the sparse line pattern, but I guess you are going to paint with brushes into a layer below the BW lines and make manual area selections for sharp color edges In that case it can be useful to use layer blending mode = Multiply for the lines layer because the color shines through the white areas between the black particles. Another way is to have all noise in the layer mask.

BTW. You seemingly have something that many of us only dream - real drawing tools obey your will. Consider to print a copy of your drawing with thinned lines and paint on it manually with real colors.

NOTE1: Ability to trace drawn curves as curves, not as filled areas has been in the wish list as long as tracing has existed. The results have been mostly poor, they usually fail in line crossings and. Programs which trace only technical drawings succeed better because they assume certain radically limited collection of possible line types and curvatures - maybe only straight or circular lines. But you can try tracing in Inkscape. It has midline tracing - only the usual "lose ones way in the crossings" but at least it exists.

Not the answer you're looking for? Browse other questions tagged adobe-photoshop vector digital or ask your own question.

12
Pressure-sensitive freehand drawing of vector paths that are editable with the Illustrator Width tool?
3
Workflow for print publishing children's book?
0
How can I get a general line from a bunch of sketch lines?
0
How to get rid of lines between vector shapes in Sketch 3?
1
How do I fix the intersection of two vector lines in Sketch?
4
How do I join lines in Sketch?
1
Sketch vector lines don't scale
5
How can I improve at drawing calligraphic font glyphs
0
If I'm using the pen tool in Photoshop to create a long, curved, line, is it possible to find the length of the line?