In some typefaces the "a" at the core of the glyph for "@" is similar to the italic glyph for "a". Examples include Bodoni, Bookman, New Century Schoolbook, Palatino, and Times, which are all serifed faces using a double-storey "a" in roman and a single-storey "a" in italics.

This is not so for many typefaces which have a double-storey "a" both in italics and roman, such as the sans serif faces Arial, Verdana, Gill Sans, and Univers. Despite the double-storey look of their italic "a", they still use a single-storey "a" inside the "@" sign.

Well, that's not a job I'm going to volunteer for again, but after activating my entire font collection & decided to wade through them all in a kind of bored yet grim determination, I found… 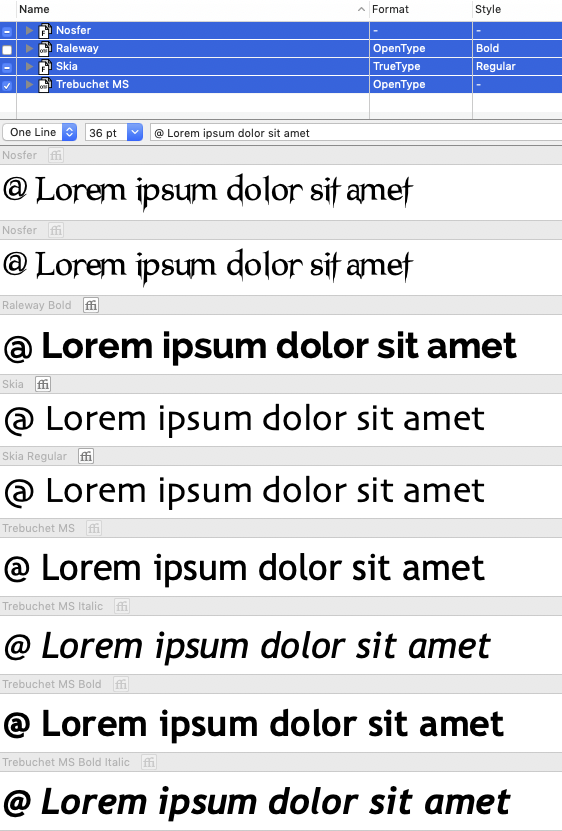 I've no clue of the source of any of these - about 35 years ago I asked the company I worked for for "some fonts" for a task. They bought a box-full of CDs, entire foundries. CDs are long gone but I still move all the fonts from Mac to Mac every time I upgrade.

Corbel, Harrington, Kefa, P22 Underground, PF DIN. Quite a few others have a hybrid form where a curl grows out of the top of a double-storey a like Audimat, Courier New, FF DIN, Lucida Console, November. Linotype Copperplate is an all caps typeface: it has a capital A!

10
The selection and use of typefaces for the non-designer
2
What are good sites for purchasing a bulk of typefaces?
3
Creating typefaces and what widths to use?
1
What's the meaning of Std and WGL on Typefaces?
0
What typeface to use based on personality traits?
1
What constitutes as a derivative work in the context of fonts/typefaces?
5
Are there any humanist typefaces based on a left-handed scribe?
1
Are there any extant typefaces based on the engraving work of Reynolds Stone?
17
Why don't any common typefaces use ascenders or descenders on capital letters (except Q and sometimes J), even though they make text easier to read?