Both can present the same colors if you have no limitation in your number system. If it happens that the numeric resolution is limited, for ex. to integers only, both systems present a little different set of points in RGB color space.

Find conversion formulas and calculate with math or test with a color system conversion calculator how much say RGB numbers must change to get the minimum possible change in HSL system. 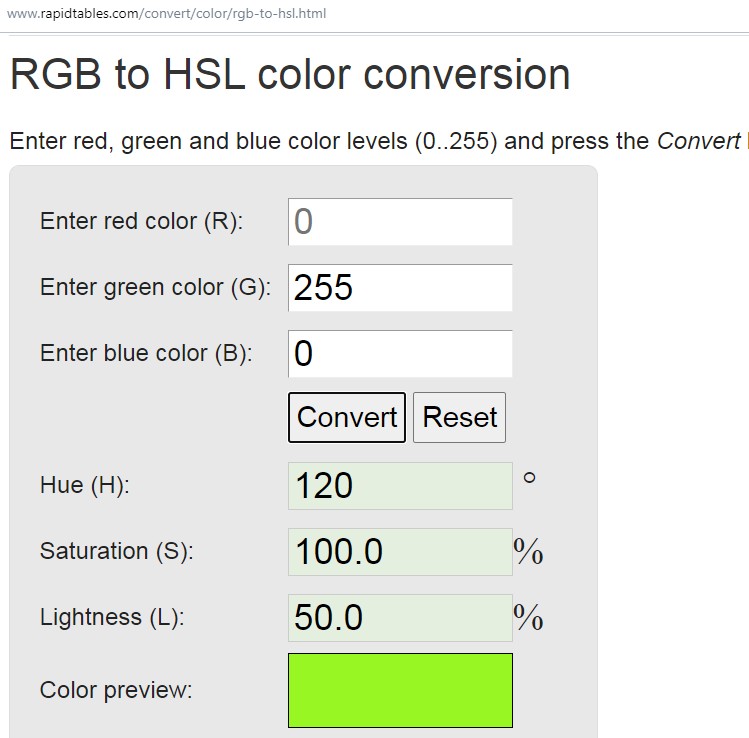 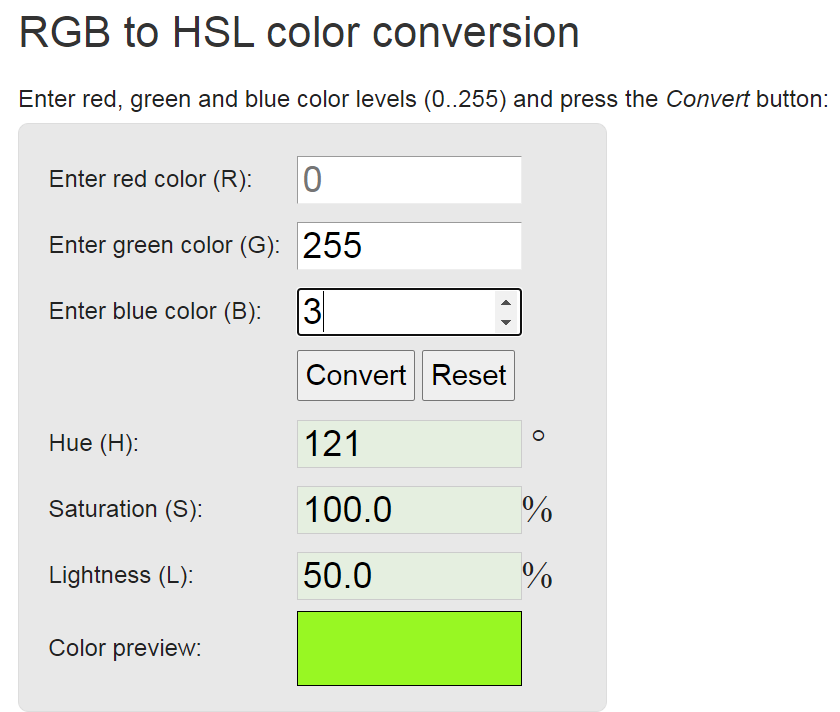 The used calculator was https://www.rapidtables.com/convert/color/rgb-to-hsl.html

It has also conversion formulas.

I think in current and common software, the HSL and HSB files are only a representation of the model, not a color model that can be stored in a normal file.

I am not an expert, so I can be wrong.

Let me explain. In order for a file to be truly an HSL file, it should be able to really store the coordinates. The Hue channel needs to have (at least) 360 levels because it indicates each of 360 degrees of a circle. But normally a 24-bit file stores 256 levels of each channel.

On the other hand, it only needs 100 levels for luminosity and saturation.

I am not aware of a format that stores these channels as such. For example, a JPG file uses compression to store the Y′CBCR color model, so it also needs to be decompressed when viewed.

But now let's see just the theory with the numbers.

But nothing indicates that you can have more levels per channel, for example, you could have 360x256x256 HSL file format or even a floating-point file that could store degrees, minutes and seconds, and some thousand values for S and L. A 16 bit per channel is still an RGB file that can store more colors than 8 bit per channel.

So, if you assign enough bits per channel you can have the same amount of colors.

Yes, you could use radians or decimals or percentages on the hue channel, but every implementation and definition I have seen says that it uses 360 degrees.

For example here is the definition from the w3c about the CSS color model:

Hue is represented as an angle of the color circle (i.e. the rainbow represented in a circle). This angle is so typically measured in degrees that the unit is implicit in CSS; syntactically, only a is given. By definition red=0=360, and the other colors are spread around the circle, so green=120, blue=240, etc. As an angle, it implicitly wraps around such that -120=240 and 480=120.

Here is the Wikipedia definition of the model

Yes, the total number of colors on my basic operation implies a cylinder, but the shape of the solid is in reality a double cone. This means that in the tip (white or black) you have fewer colors. Multiplying for example a value of L=0 by any hue, the color will be the same black.

Here is the image from Wikipedia

The limitations come from the units we are using by convention. an RGB cube standing on a vertex can easily transform into this shape with the colors remapped.

Here are two images I use for various purposes: Slices from an RGB cube remapped into slices of an HSB cylinder. All the colors are there due to my own auto imposed limitations of the implementation. 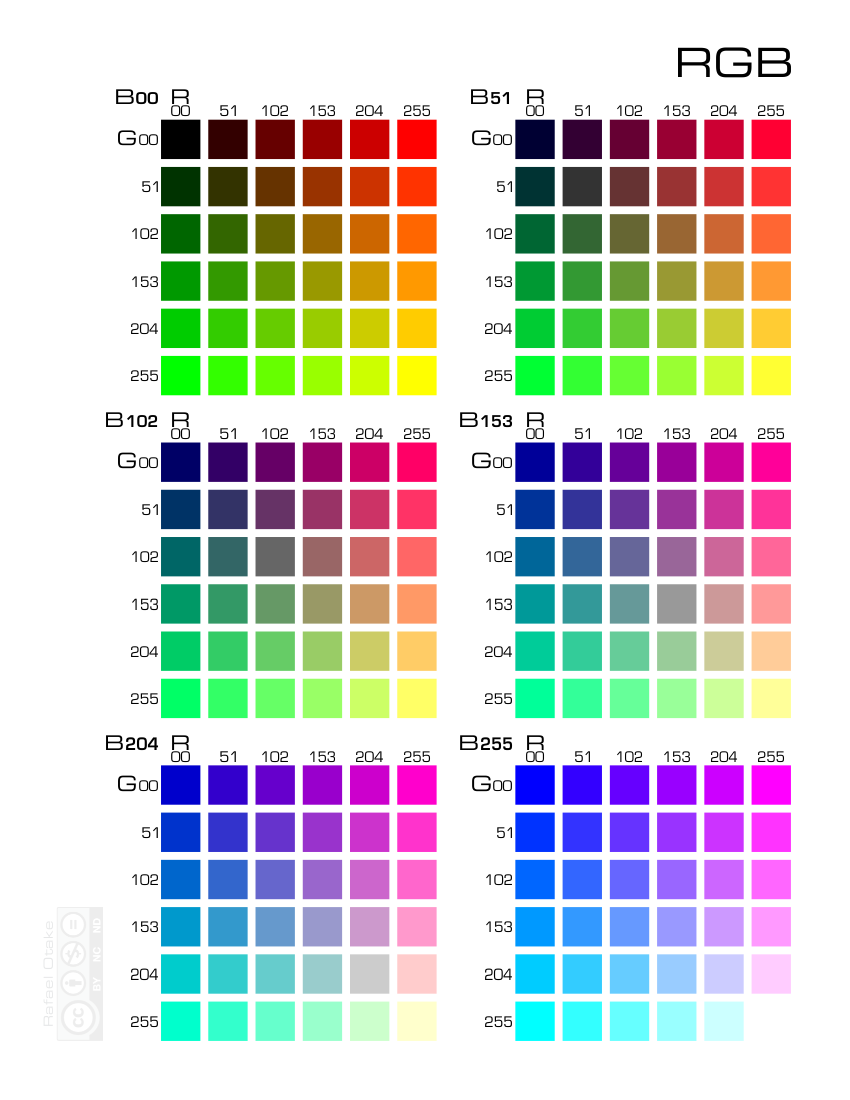 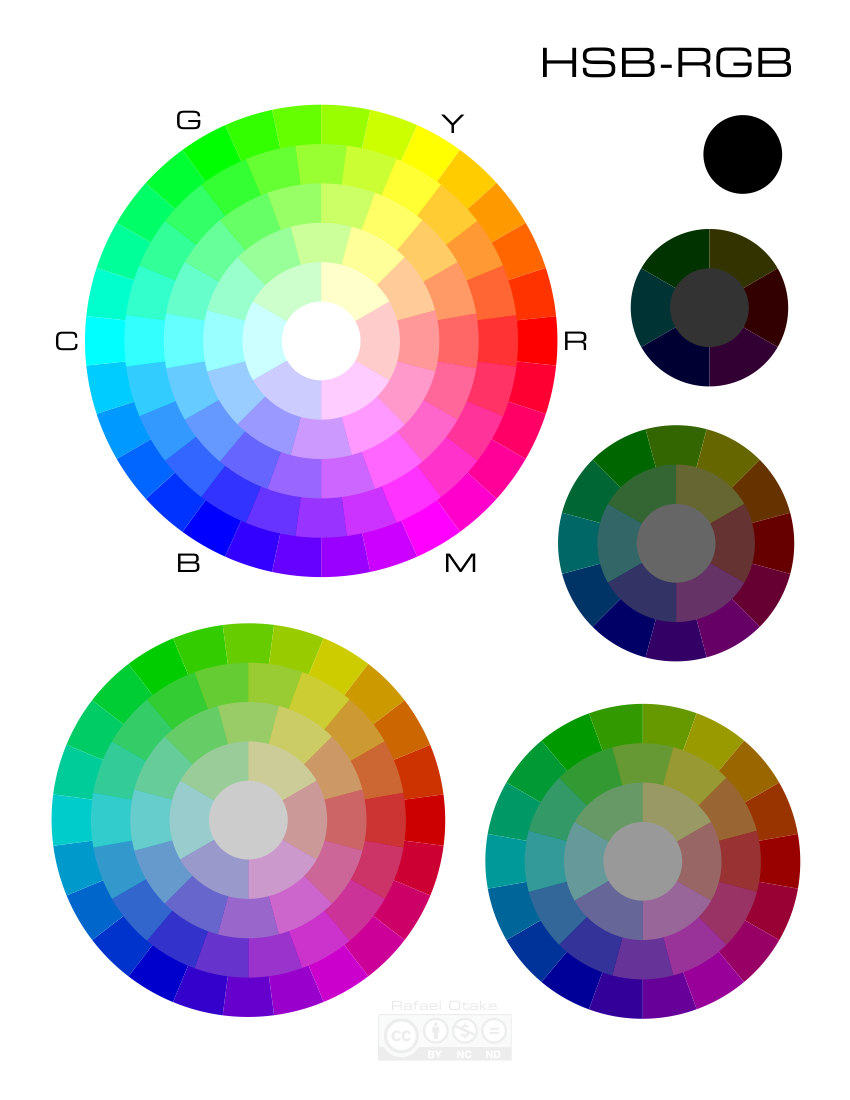 But I do not need more. The question now could be if we really need a file format that can store HSL or HSB channels.

4
Differences in color conversion (RGB to CMYK) / How to choose Corporate Color
2
RGB to CMYK conversion — more than one way?
8
Does hue/sat/lum offer a smaller range of colors than RGB?
11
List of RGB quaternary (and beyond) colors?
6
How do i design for a printer with more than 4 primaries
2
Color values change from one Photoshop document to another
1
2-3 color logo vs. 4 or more colors
6
Is there a standard for color wheels?
1
Is the low statistical correlation between the HSV channels, conditional upon the color name, a well known property of the color space?
3
User Input Color Restrictions