I'm trying to automatize giving character styles to the editor given names (not the author names) in literature sources like this one via Find/Change (not GREP styles):

Doing that, I want to grap any capital letter followed by a dot AFTER the word In in a paragraph. Since the regular lookbehind (?<=) won't work with . and + opperators, I use \K

As an additional info to this particular case: Using a fine-tagging script, everything is already tagged with different character and paragraph styles, the script just has problems with the double/multiple given names of the editors which is why I'm trying to find them manually to correct them. I can't post the script here since it's not mine to give.

I have multiple things not working out:

1. finding more than one occurence

The second query only finds the last occurence, not the ones inbetween. Since .+ looks for everything that comes before f.e. M. C., it seems to include any occurence that come before the last. I just can't seem to find a way to grab all occurences. Does anyone know a way or is this simply not possible

Both queries work for themself but I can't combine them with "or". Now in general it does work with simpler test queries but with the ones above. Possibly because the first query is a part of the second.

Does anyone have an idea how this could work?

I can't say for sure that this isn't possible, but I haven't been able to find a way. Instead I can present kind of a workaround.

GREP styles are applied in sequence, so you can first style all capital letters followed by a dot and then afterwards remove the styling up to the word "In" like this. 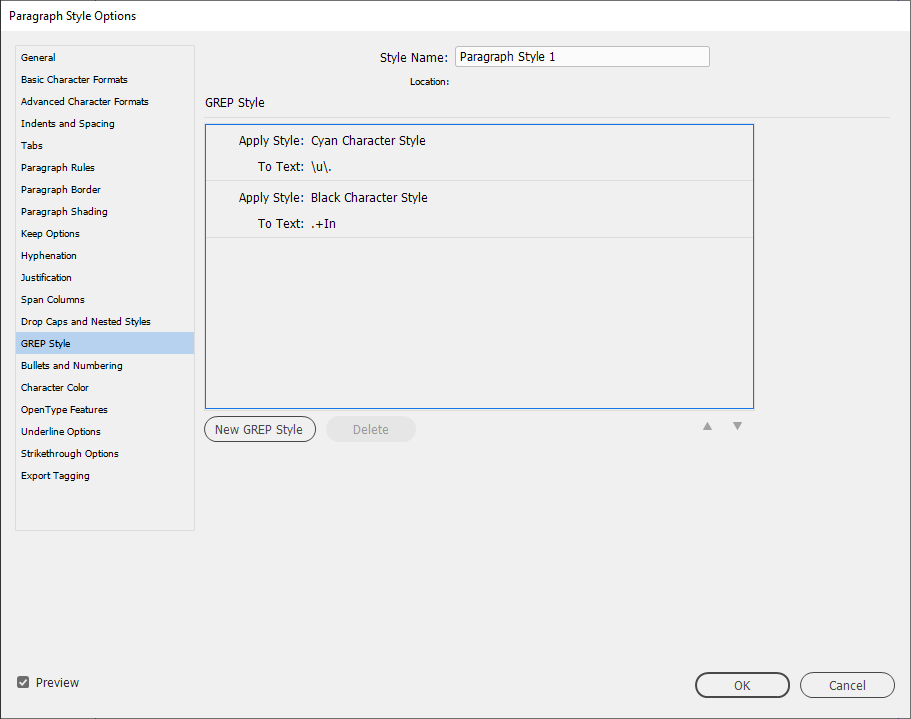 Be aware that you can't just apply [None] to cancel the styling. You have to make another character style that actively reverts whatever styling you have applied.

0
Bullet List Override
1
Indesign grep: Grab everything but
5
How to get an RGB hex code in or out of an InDesign RGB colour swatch?
0
InDesign GREP: not replacing the search
0
Indesign grep replace question
1
InDesign, Grep - what is the base syntax of InDesign grep
2
Indesign newlines with datamerge
1
Indesign GREP: Find sentence until first occurence of specific character
3
Indesign GREP: Negative lookbehind with variable length