I am following a tutorial that uses InDesign CC. I am currently practicing on InDesign CS6. The tutorial is talking about CC libraries. I added a new library to my CS6 document and created new swatches which I would like to add to my library but it will not allow me.

I am wondering if this is a feature not included in CS6? And how I would add swatches to a library I have created in the CS6 version. 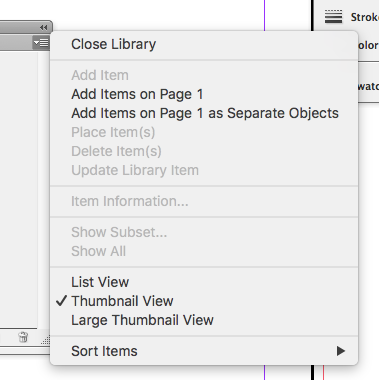 CS6 Libraries merely contain saved objects. With CS6 you create an object and then add that object to the Library. You could merely create a rectangle filled with your color, that rectangle can then be added to a CS6 library for later access. CS6 Libraries can't contain swatches or styles or anything which is merely a definition, Library items have to be objects.

The actual color swatch itself can't be saved to a "library" in CS6 but can be saved to an .ase file - which is a saved external file containing merely swatch definitions. When you load an .ase file, it merely populates the Swatch Panel, it doesn't open or populate any "library" panel directly.

So yes, there is a difference in Library operations between CS6 and CC versions of InDesign.

Not the answer you're looking for? Browse other questions tagged adobe-indesign cs6 swatches adobe-library or ask your own question.

1
How to print to PDF on Mac OS X from Adobe InDesign CS6?
0
InDesign and transparency flatteners location
3
How to add catchwords using InDesign
10
Photoshop CS6 Resize Rectangle with Rounded Corners
5
InDesign CS6 - Update multiple displayed artboard/pages of linked files without relinking
3
RGB conversion in InDesign
1
EPS file not displaying correctly when exported from InDesign?
0
InDesign: Synchronize styles WITHOUT Color swatches
1
How to renumber static numbers in InDesign CS6
2
How can I relink an element to a clouded CC Library element?