How do you blur out one end of an object more than the other end?

I am busy creating shadows for a 3d glass box that I am working on. I want to create the shadows that the pillars make on the ground however, I seem to be having trouble trying to figure out how to blur one end of the shadow more than the other end. My shadow is a vector shape that I have drawn with the pen tool. I do not want to blur the whole shape evenly, I want to blur one end more than the other end. Kindly see my screenshot below. Any help would be appreciated.

It can be done in illustrator without plugins and without rasterizing. Unfortunately it will be rasterized in exports because it's based on blur effects. 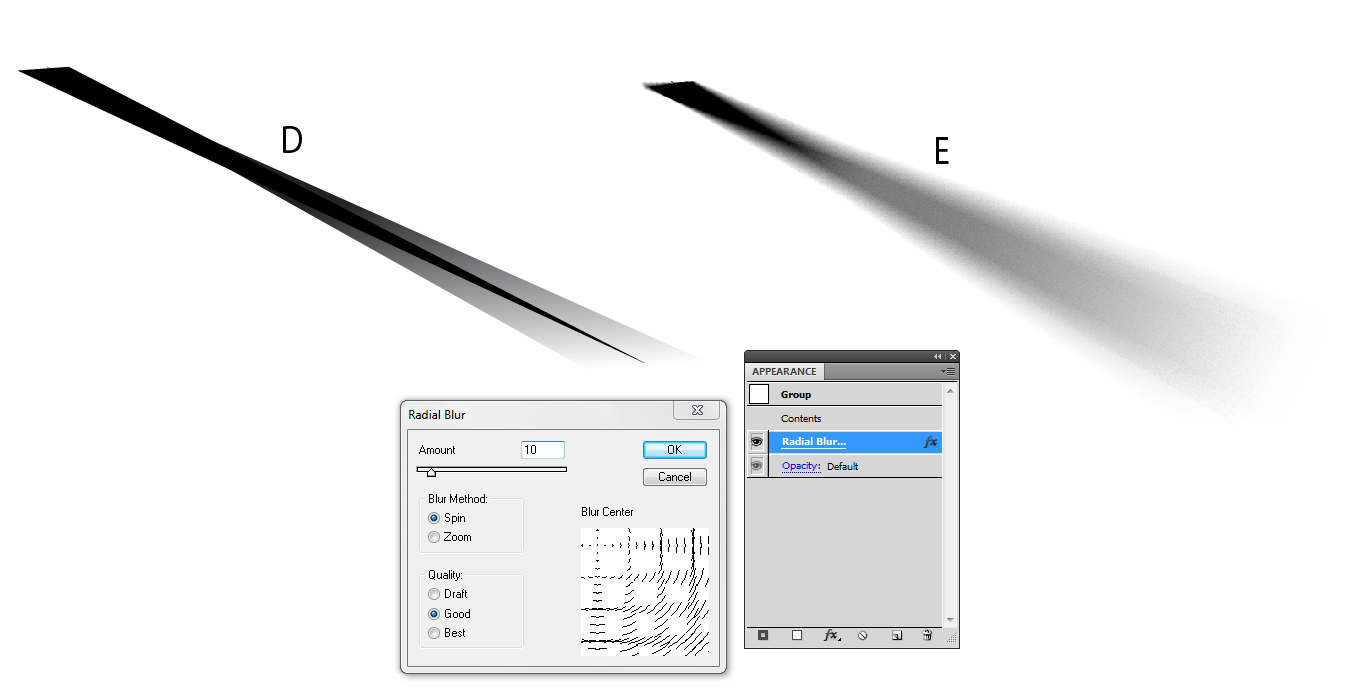 E has got radial spin blur effect. You must manually drag the spin center to the right place.

Nothing is permanently rasterized. You can still select the parts of the blurred group with the direct selection tool and adjust their colors, opacities and blending modes. The blur dialog can be reopened in the Appearance panel.

It has a weakness. Blur is not projected as well as possible on the ground. For more flat looking effect the radial blur can be applied to version C. The result should be rasterized before shearing and rotating. Version F has that working order.

My opinion is that F looks more right. You do not lose quality if you have rasterized the blurred shape with high enough resolution.

ADD: There's a comment (by joojaa) which says that blur and other rasterization based effects have limited resolution when they are rendered for screen or print. That's true. The resolution should be set to high enough value, say to 300 pixels per inch, when one starts a new drawing.

If you want to keep it as vectors:

Draw two shapes, one is the interior of the shadow, the darkest color and the other is the outer border, where it starts to get darker.

Just keep both shapes closer on one side and further away on another side, and use the blend shapes tool.

(I have simplified the steps so you can see them.)

Then you could play with opacity to all objects. As the objects stark into each other they will start darkening the shadow progressively into the inner shape.

If you want to explore raster effects, you could try "lens blur filters" there is an option to use a depth map to guide the amount of blur applied.

Not the answer you're looking for? Browse other questions tagged adobe-illustrator adobe-photoshop or ask your own question.

0
Photoshop: Writing on glass effect
0
Strokes of rectangle and pen tool line different
1
How to make a shape that blurs the image behind it in illustrator?
0
How can I create this in Photoshop or Gimp?
1
photoshop - how to make a layer on top of all layers effect all layers except one down
0
Produce specific effect with Photoshop
0
How to manually blur more layers at once in Photoshop