Gimp 2.10 has unified the sharpen and unsharp mask filters that were two separate filters in earlier versions (both located in the Filters > Enhance submenu).

I can imagine that from an "engineering point of view" the move seemed to make sense, because they worked using a similar concept. However the new unified filter is not without disappointments. Allow me to describe:

The sharpen filter in v2.8

I found that sharpen worked well only for relative smallish images, like below ~ 2000px longer side, or so, and when cranked up to a high value, it provided results some may consider quite rough, not fit for professional publishing.

But I'm not a professional publisher. What I needed it for was sharpening (often low resolution and quality) images of various machinery and technical products, in order to observe and understand how these complex structures worked.

For this purpose it did not matter if the result looked a bit rough.

The unsharp mask filter in v2.8

The way I used this filter was a bit comparable to how the Clarify effect/filter worked in some earlier version of PaintShop Pro that I had the opportunity to try out. This clarify effect differentiated separate areas in a picture, often, for example, subject versus background, or overlapping objects, and made them stand apart more (so the eye perceived the spatial "depth" much easier, in effect, in an instant).

I used Gimp 2.8's unsharp mask filter to get somewhat comparable results by setting its Radius to around 100px and even above (combined with only a mild value for Amount).

I often used this trick also for images of landscapes.

Sharpening seems to have lost some of its edge: like it now prioritizes publishing-industry oriented quality over achieving extreme visual revealing power.

My unsharp mask trick for large areas now delivers unacceptable results, because it deposits so much dark into smaller-scale, midtone-but-in-a-brighter-context areas.

In the new, unified filter, increasing the Radius increases not only the distribution of the effect — the area that is impacted — but also the intensity: darks get even darker. This should however be be the responsibility of the Amount slider.

So now, if I reduce the Amount, the results do not seem to get applied evenly: even if I tone down the effect to be barely noticeable in most of the image, the darkness of small pockets persists disproportionally: crevices and small shadowy areas remain to stand out painfully dark and ugly from the rest of the image.

I never had such a challenge with the old Unsharp-mask filter.

Can I get back the old filters?

Do some plugins exist that would bring back the algorithms of the old filters? Or what other action can I take to benefit from the effects of the older variants?

I use Ubuntu 20.04 (in case it matters), but if you know something specific to Windows 10, I'd be interested to hear that too.

Following up on @BillyKerr's answer, I dug deep enough to find out that on Ubuntu 20.04, the standard available Gimp version is 2.10.18, this is the one I was using.

Now I have installed the "flatpak" variant too (it's like "Portable Apps" for Linux), which happens to be newer: 2.10.24.

In 2.10.24, an addition is present: the Blending options section is now available in the filter window, and digging in it, there is a choice between Default and Legacy. This looks exciting, but to be honest, in the first quick experiments I could not spot the difference between them. Anyways, I expect, if this would work, then this would offer a relief only for the Unsharp Mask challenge, as the new unified filter seems to be based on that.

You may be able to extract the old filter from an older copy of GIMP, but no guarantee it will still work in newer versions of GIMP. You can download old stable versions from the GIMP website: https://www.gimp.org/downloads/oldstable/

Edit: Further to comments, the sharpen filter for GIMP 2.8 on Linux seems to be located in the following folder: gimp-2.8.22\plug-ins\common\sharpen.c So you'd need to copy that file and paste it in the corresponding folder in GIMP 2.10. Obviously I've no idea if this will actually work. Perhaps it's worth a try. I'm no Linux expert though.

Anyway, I'm not convinced you can't get almost exactly the same effect from the new unsharp mask filter. Obviously it requires manual tweaking and there are more sliders to deal with, but after you've got the settings, you could just save it as a preset, then reload the preset when you need it.

After having a look at the old filter example here, and using the images on that page, here's a screenshot showing the new filter and the result is almost identical. I adjusted the settings until it looked as similar as possible. Then I saved a preset called "Old Sharpen" to use as a baseline. To adjust further, as per the old filter, use the "Amount" slider to adjust the total amount of sharpening. 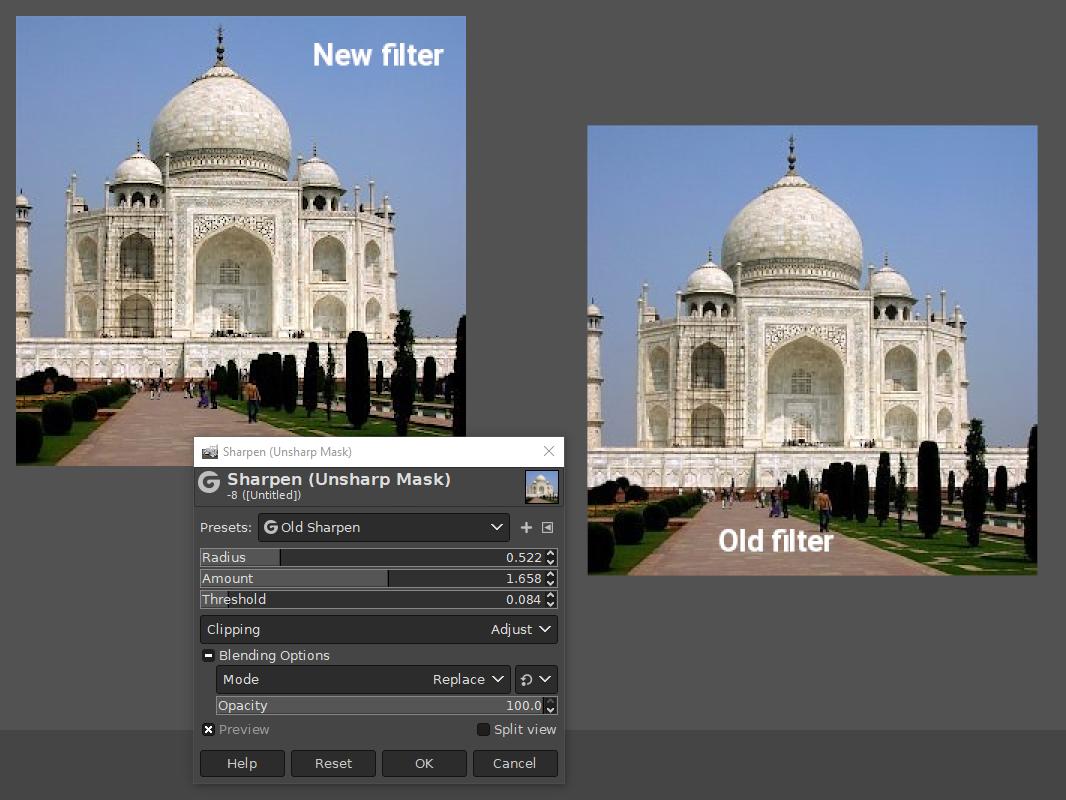 Remember if you're applying sharpening on images intended for the web, to always view them at 100% zoom, and obviously first rescale the image to the actual size that is going to be used. Trying to apply sharpening on larger images (zoomed out) is probably where you're coming unstuck.

Not the answer you're looking for? Browse other questions tagged gimp filter or ask your own question.

2
Is there a way to show areas not covered by any layers in GIMP?
1
Seeking advice when working with SVG filters - more specifically multiply
0
How to edit the "Edge 3d" filter output properly with InkScape?
0
In GIMP, how to get a selection from a mask?
0
Why does photoshop take so long to render an image with a filter applied?
0
How to apply a filter to a layer and its mask at the same time (in a single pass)?
0
How to apply a Butterworth/Gaussian filter in GIMP after converting to Frequency Domain?
0
Lost my Pixelize settings in Gimp?