Software I can replicate this notebook with

Any software or tutorial relevant to this will be highly appreciated. Thanks in advance!

Illustrator can be used to make book lookalikes. It's not especially difficult if one has practiced well basic operations and doesn't expect full photorealistic look. You can find in GDSE several book mockup -cases which have got answers and some of them have used Illustrator. The finest works, of course, are based on advanced 3D programs and knowledge how to use them.

Books with a spiral binding are not common in GDSE. I have hanged around few years, but haven't seen here any.

Often the binding isn't spiral at all. I guess your example also is bound by a spring like this (only a short piece to show the bending idea): 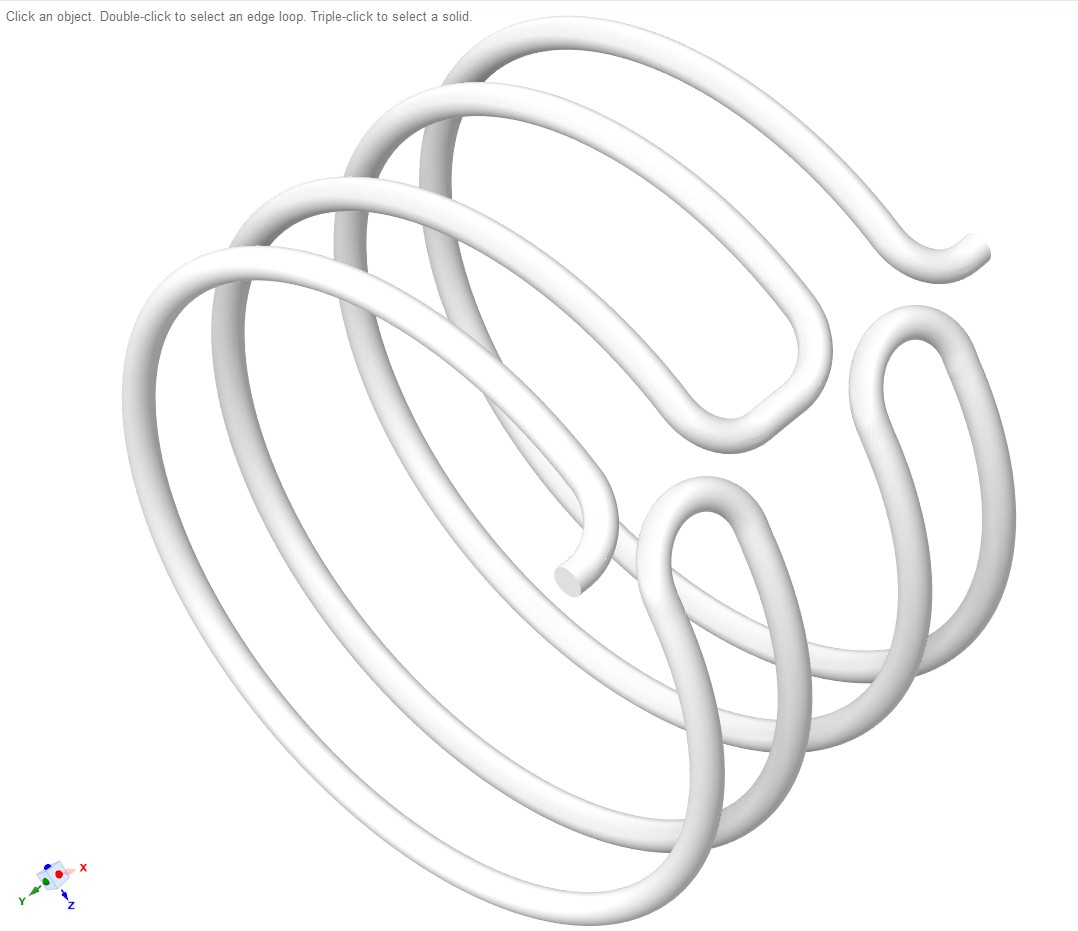 The arcs are straightened temporarily and all pages are placed at the same time.

That spring is quite easy to make in a 3D program, but making an image of a book doesn't need it, because the tricky bendings are hidden behind the pages. You need only the arcs and they are much simpler. The next "book" is made in Illustrator: 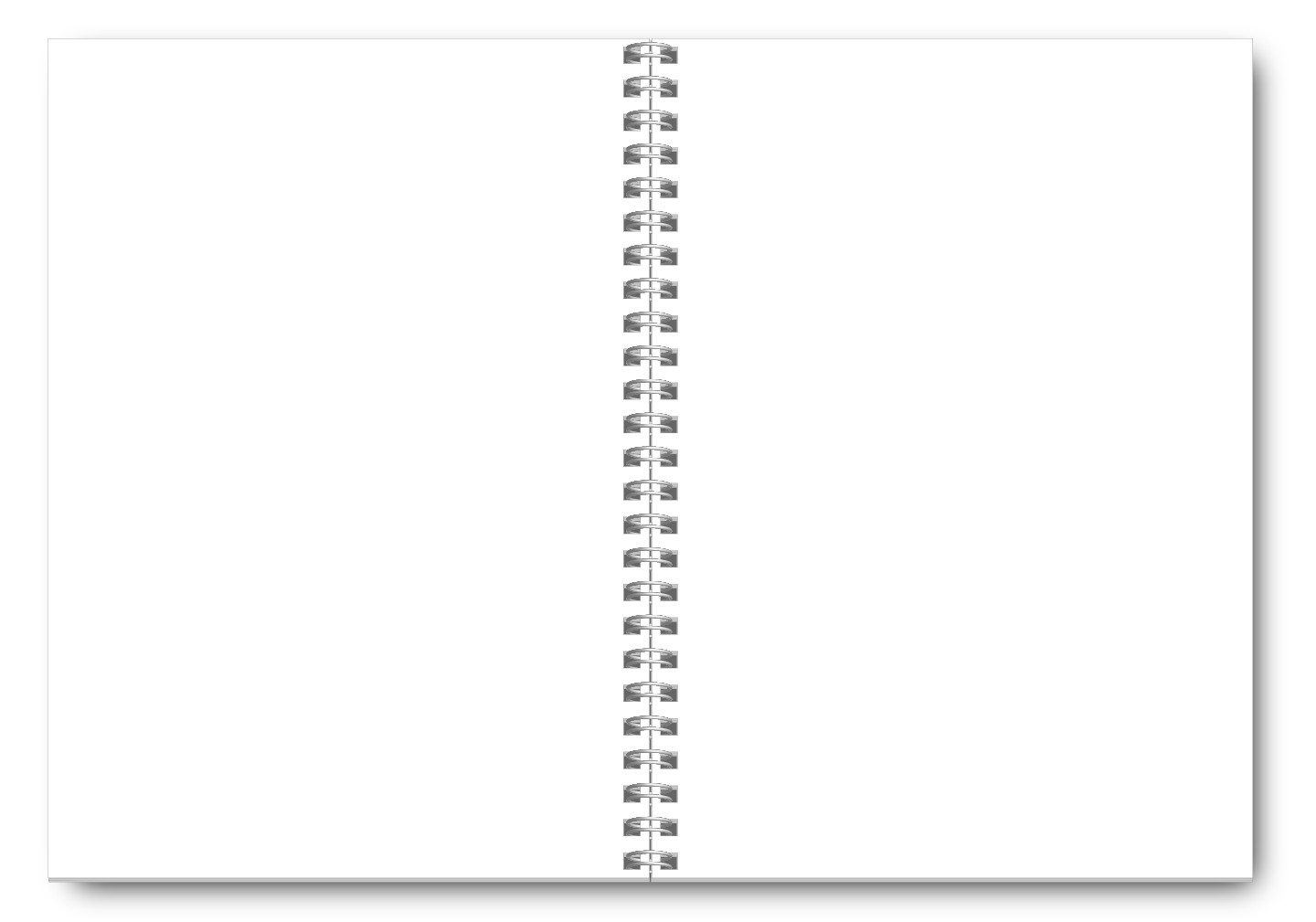 Here's a zoom in view which reveals the binding better: 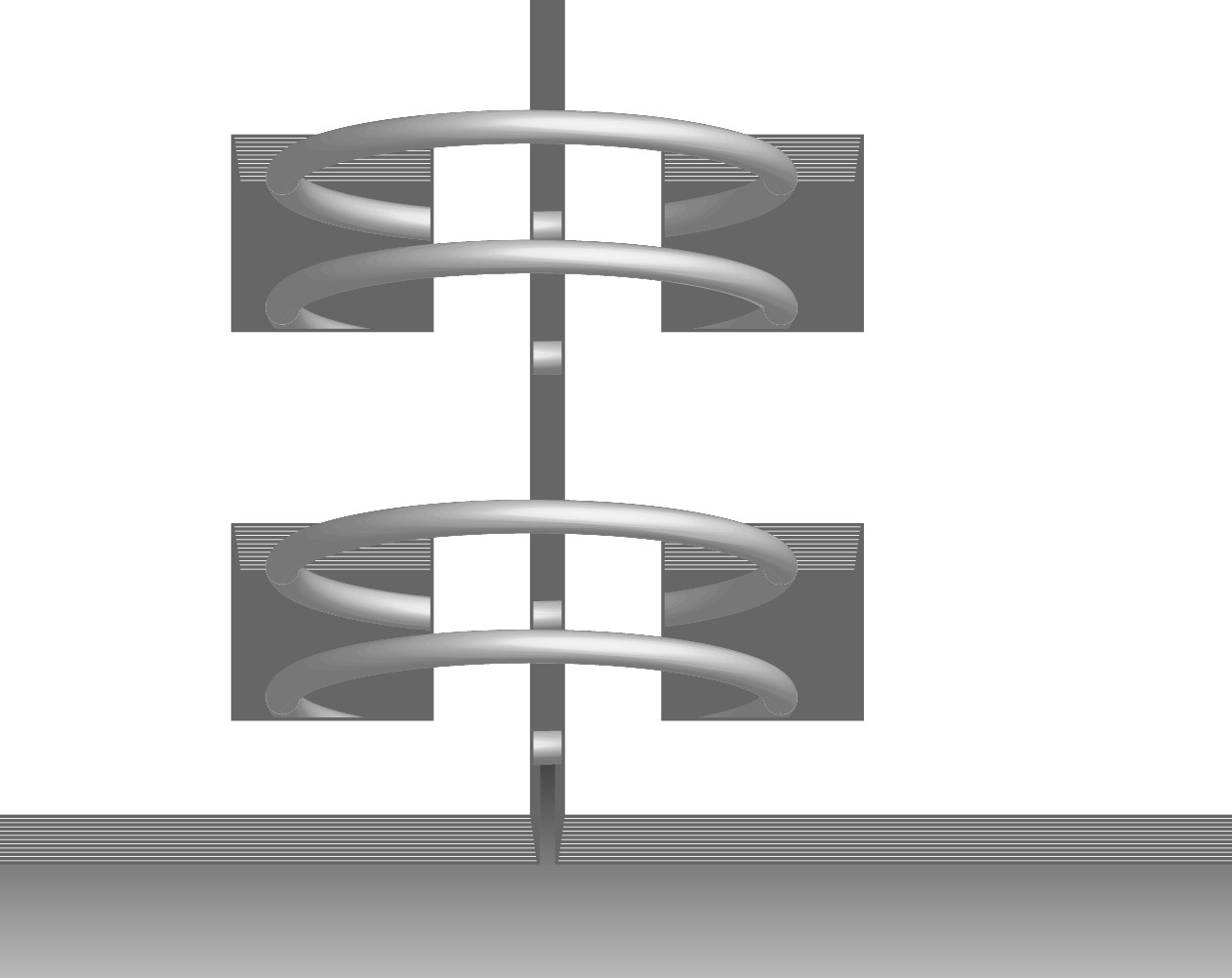 It's not perfect. The pages are not at all curved, their edges are too simple, they are like drawn straight lines, not a bunch of white sheets of paper. There's also no perspective.

The "book" can be exploded to parts: 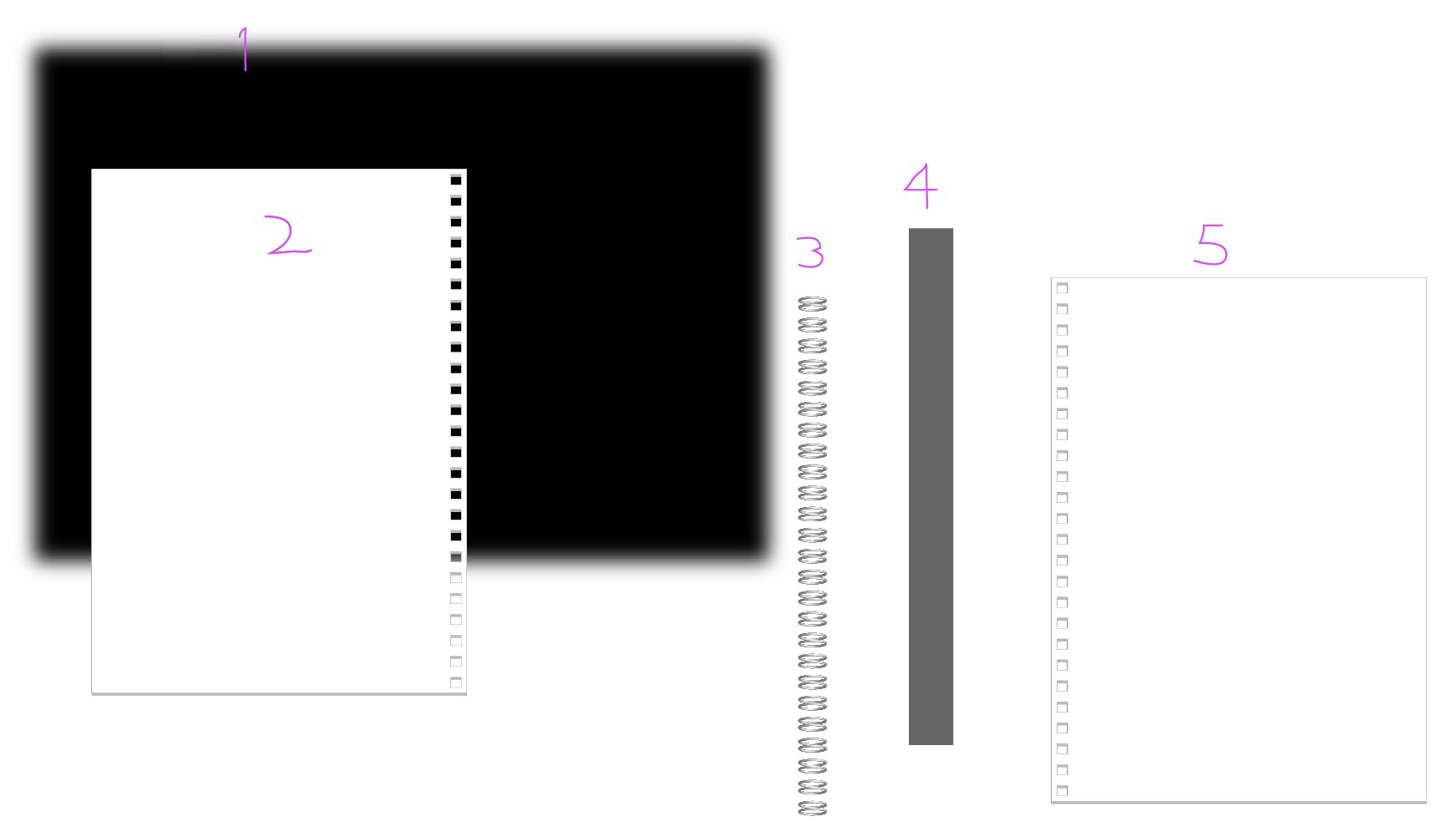 The fake binding spring is made with Illustrator's 3D Revolve effect. 50 small light grey circles are grouped and the group is revolved. Actually it's not revolved full 360 degrees, there are 2 separate 180 degrees revolutions: 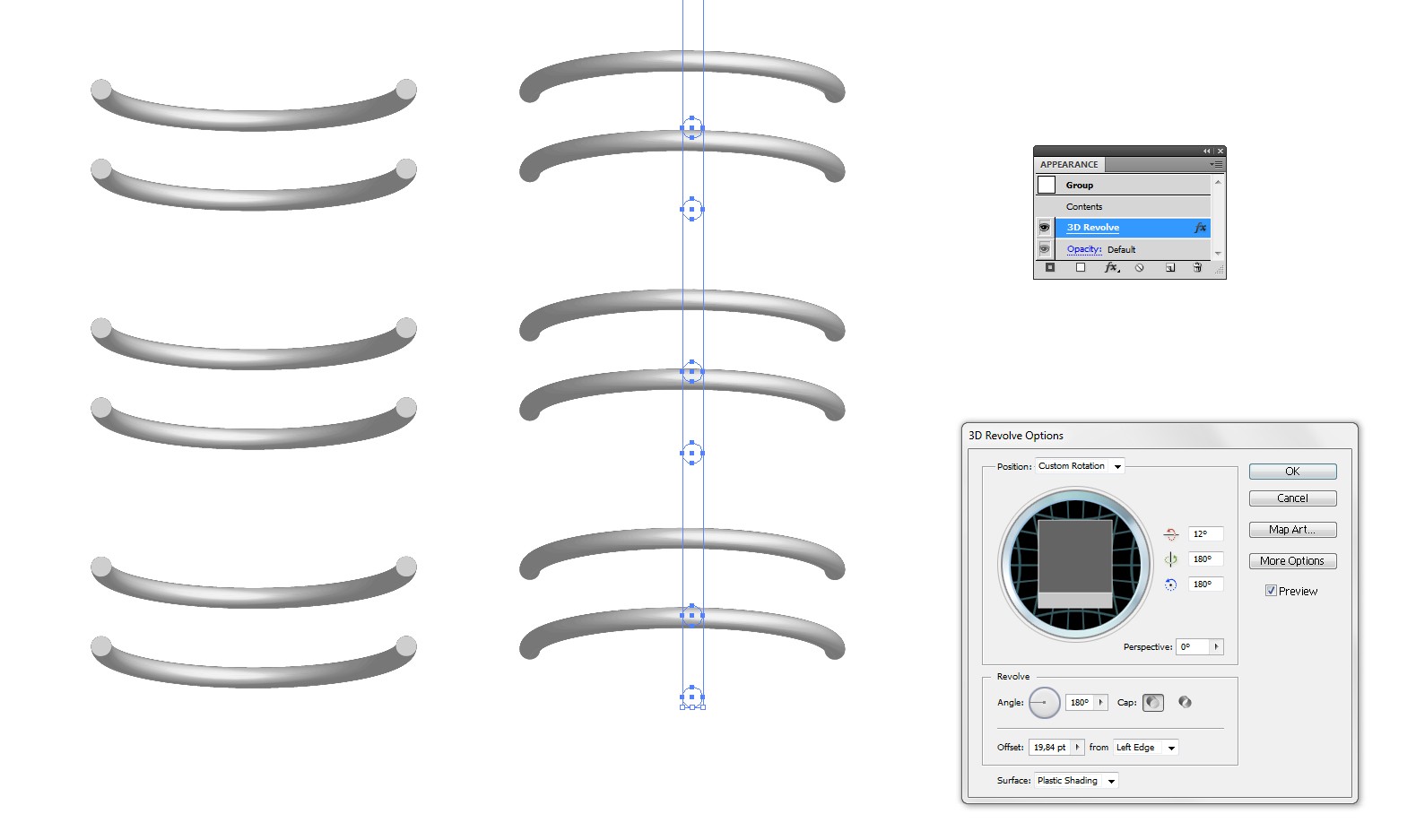 Illustrator's 3D effects can have perspective, but that makes combining the parts very complex. In Illustrator there's no way to make at the same time the page bunches and the spring.

One could say that there's the perspective transformation - use it! It would make the book look very thin and the spring would look like someone had stepped it flat. I skipped the perspective.

In 3D programs the perspective is no problem at all, because it's created automatically in the the rendering of the 3D model. There's no need to worry it when building the 3D model.

Not the answer you're looking for? Browse other questions tagged drawing or ask your own question.

4
An online resource or a book that teaches how to draw from a physics/optics perspective
2
What program can I use to convert a 2D industrial design plan to 3D model?
1
Designing images with dimensioning
4
How do I create this tessellation Mondriaan-like graphic?
4
Which software can produce drafting scale line diagrams
1
What is a good software package for technical drawings with shading?
0
Software for simple sketching in 3D
3
How to draw in watercolor style using software only?
5
Stacked light circle effect in Photoshop?