What is this adjustment/effect called? 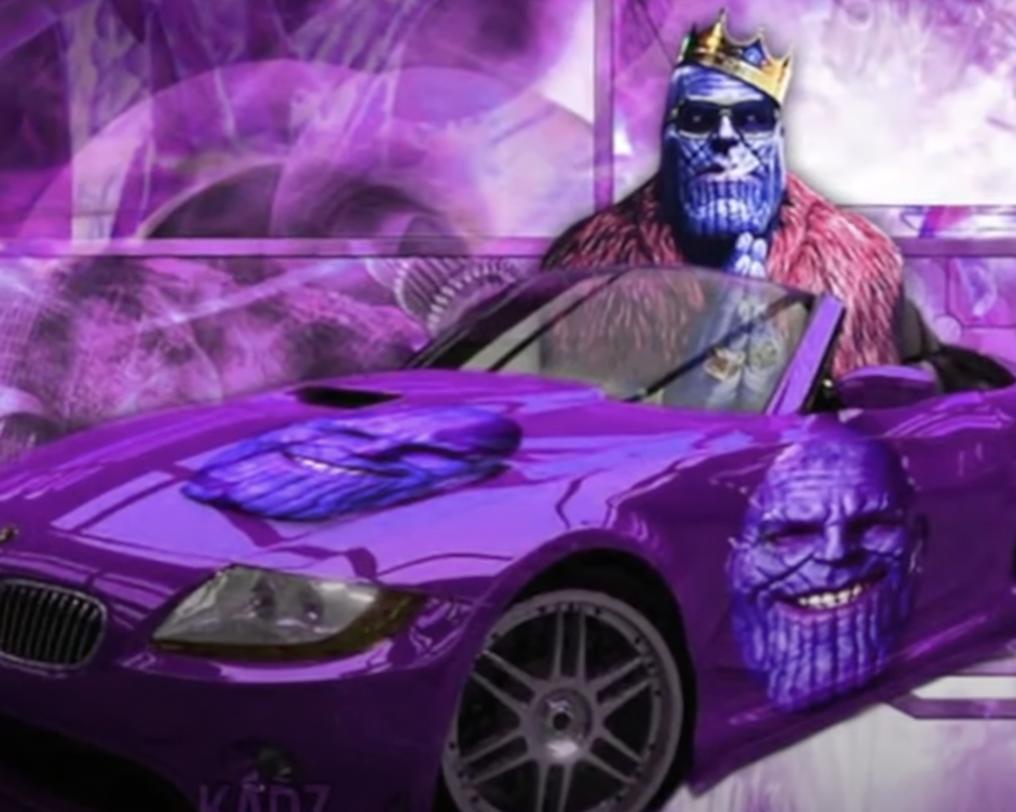 I am new to graphic design and photoshop. I would like to know how the image of Thanos (the character in purple) was flattened against the front of the car like that. What is that effect? How can that be accomplished? Please find the image attached (Source: Kadz on YouTube)

Inserting new shapes to an existing image is a common task. In Photoshop it isn't a single click effect which has an established name. In 3D programs it can sometimes succeed with very little effort and there it's called image or artwork mapping, but in Photoshop it generally needs some work and several steps to look plausible.

As already said by others this time the job has not been done especially well. It's like a beginner has fudged up something in a few minutes. The unsharpness hides many rookie mistakes, but that trick cannot be used if one does some paid work, for ex. advertisements. As a plus he has succeeded to let the faces have some glosses which seem to belong to the car image.

We try to insert a face onto a car image approximately with the same care level as your example. I do not have the same images, we use these:

At least the car has been the state of the art model in one corner of the globe, maybe the best one which the empire succeeded to produce. The background of emperor's portrait is removed.

The portrait must have more resolution than the final usage needs because otherwise it will get degraded too blurry in the needed transformations. Converting the portrait to Smart Object helps to keep it sharp. Do not expect a screen resolution image stands scaling to bigger size nor heavy deformations.

In the next image the portrait is inserted as a new layer to the car photo and that layer is converted to Smart object. After it The layer is scaled smaller and rotated to a more right position. It's still far from fitting:

The next thing to do is to distort the portrait to fit into the perspective and the curvature of the surface. It's easy by applying Edit > Transform. There are many distortion tools (scale, rotate, skew, perspective, warp, etc...) They can be applied iteratively many times without cumulating any blur if the face is a smart object. This time only warp is used:

If this were a real car with a real decorative painting, the top half of the head probably would be stretched higher than the original to make it look more threatening in the back mirror of the car driving ahead.

On plane surfaces no warping is needed, plausible result is possible with quite simple distortion as an older answer shows.

Only an approximate surface curvature can be followed easily. If one wants to follow all fine bendings he needs Puppet Warp and quite soon the amount of work grows to intolerable. My warping is easy to do and it's only marginally better than questioner's example.

Lights and shadows on the portrait do not fit well, some glosses of the original photo would be useful. Strict B&W color can be intolerable. In addition many details of the car are hidden below the portrait.

The portrait can be made transparent, but that must be made with layer blending modes to preserve contrast. It's useful to insert a couple of adjustment layers to be able to search a good combination:

The portrait layer (=SunnyGuy) has blending mode = Hard Light. The curves layer reduces the contrast to a acceptable level (=removes full white). The Hue&Saturation layer in colorize mode colorizes the face to the same green as the dark side panels of the car . Some of the original glosses are now visible. Both adjustment layers have "the next image layer only "-switch =ON.

The glossy nickel parts maybe earn to be well visible. In the next image they are copied and pasted to a new top layer:

It's called perspective distortion. Unfortunately the example you posted is not a very convincing example. The distortion hasn't been done properly and looks very amateurish.

Not the answer you're looking for? Browse other questions tagged photoshop-effects photo-editing image-editing or ask your own question.

3
How can I achieve this stamp / photocopy effect?
2
How to obtain this effect using Photoshop CS6?
1
Does anyone recognise this effect? Is it half toning?
1
How is this painted-like effect in Photoshop called and/or made
8
How can I modify an image to have colors that flow into each other and what is this effect called?
0
How do I add a glass effect to an image?
10
Does anyone know how to create this kind of pattern design in Illustrator or Photoshop?