Fonts with an upper-case 'E' slanted in each direction

I am trying to find a font similar to this image. Specifically where the top and bottom prong of the upper-case 'E' are going in opposite directions. Anyone happen to remember seeing one similar?

Obviously you are going to write long texts with that special E. Otherwise you would outline the text (=convert to curves) and edit E to the wanted form with the node editing tool (=direct selection tool in Illustrator).

In the next image some nodes are moved upwards and some are moved downwards. Only one E is edited, the rest are copies: 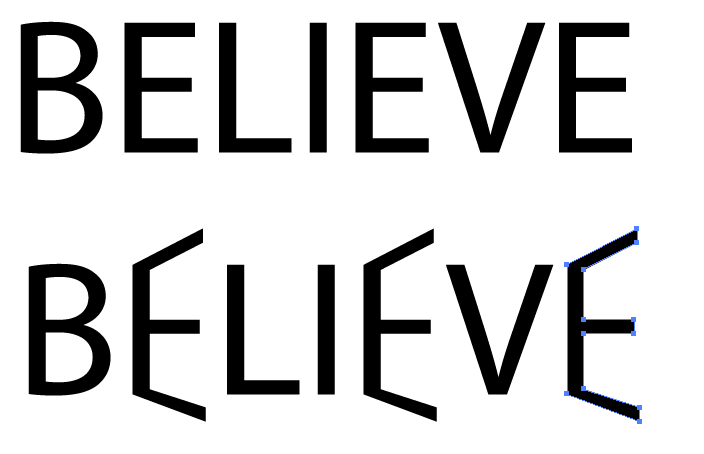 I do not know such ready-to-use font. I suspect it's non-existent because irregular heights make fine typesetting difficult. In theory a fully free font could be edited in a font editor to have the needed E. The font must be explicitly licensed as free to edit. Otherwise it's a software copyright crime.

Unfortunately most commercial font suppliers have forbidden making edited versions of their fonts. Editing outlines in a text is not criminal if one has valid right to use the font, only making a new font file version can be forbidden.

If we do not have legal obstacles, font editing still needs a font editor, some experience and consumes time. For a single writing job I would not do it. I would instead add the modified E's as inline graphics to my text. At least Adobe InDesign allows it. There own symbols are simply pasted in the middle of the text.

Not the answer you're looking for? Browse other questions tagged fonts typography font-identification font-recommendation font-design or ask your own question.

2
Where can I find a similar font?
2
What rounded bold cursive font looks like the "Dunked" logo?
0
Anybody know the name of this tattooed fancy Gothic font?
2
Similar script font with specific upper case B, H and S
5
Why does Consolas scale so well on Windows?
1
Looking for a font which has a similar A bar height and R counter height
0
What is this cursive font?
0
Help me find a non-commercial alternative to this commercial geometric sans serif?
0
Looking for SERIF font with slanted lower-case "e" and lower-case "w" with spur