In Adobe Illustrator: I'm trying to build shape - corresponding to a cooktop heating element exactly like that one shown in the image - for a logo - and I have no idea where to begin.

Can an experienced vector designer walk me through the tools/steps they would use?

I know how to do a linear spiral and a non-linear spiral but this is quite a unique shape. I want it as a shape and not as a line.

At the end, it would also be nice to do a strong vanishing point and add a slanted perspective. 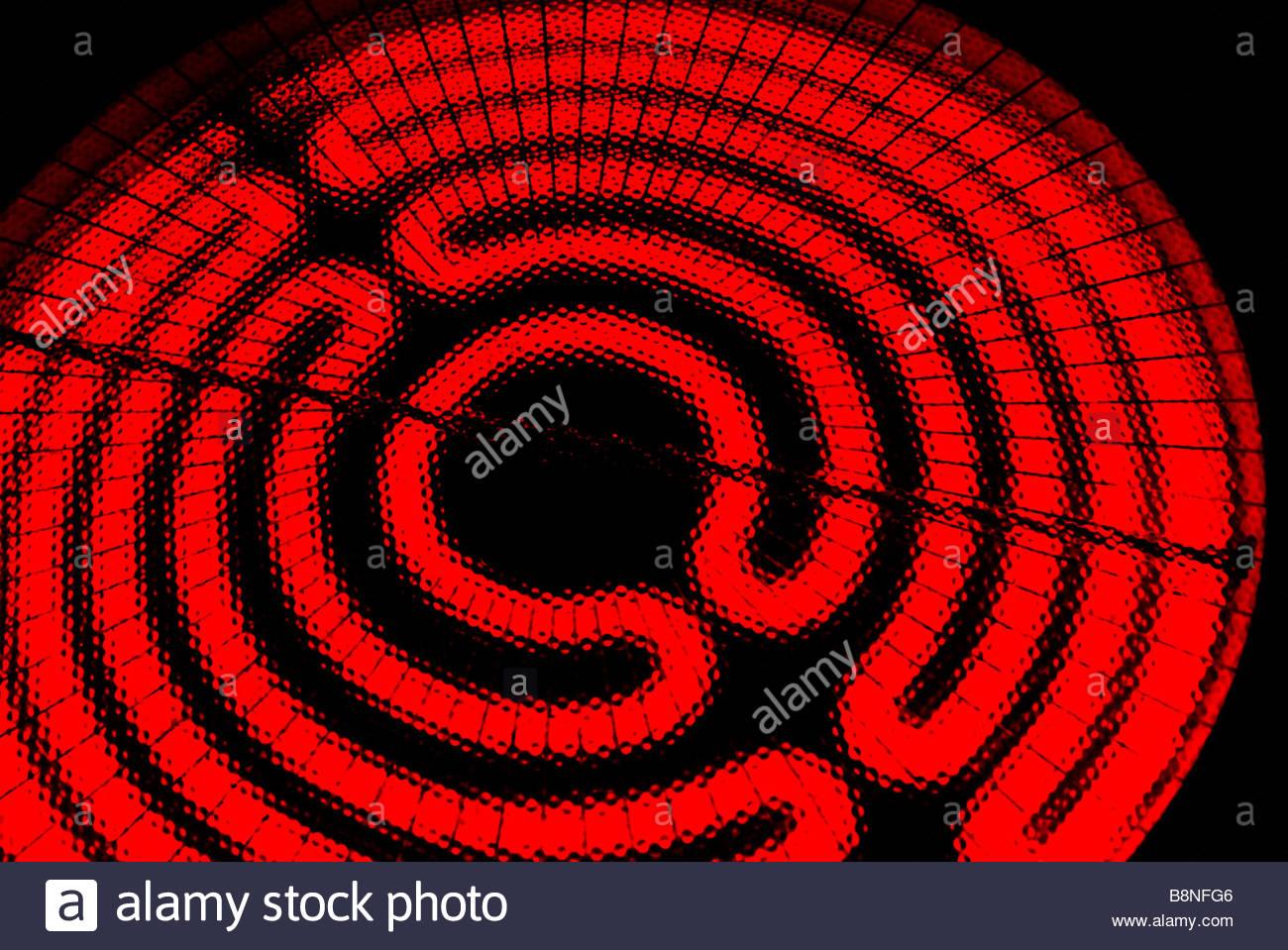 There are probably many ways you could do this. Here's my suggestion, with basic steps.

Building the path by splitting and rejoining circles and rounding the corners is seemingly shown by others. I skip it. The rest of the job needs several tricks which may need some time to be caught if you are a beginner.

I put together a simplified version which has only a couple of circles: 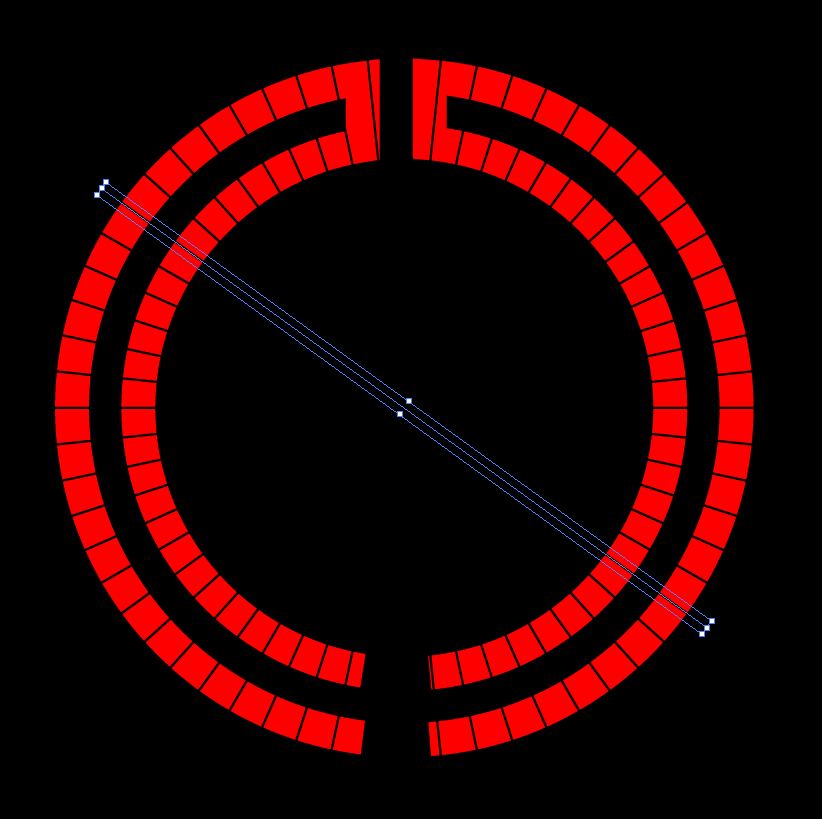 On the top there's 30 rotated black lines. One of them is selected.

Inserting the ripple effect and perspective is easiest in Photoshop. Copy and paste the vector in Photoshop as pixels to an image which has at least 1000 x 1000 pixels. Apply filter Distort > Glass > Tiny lenses. 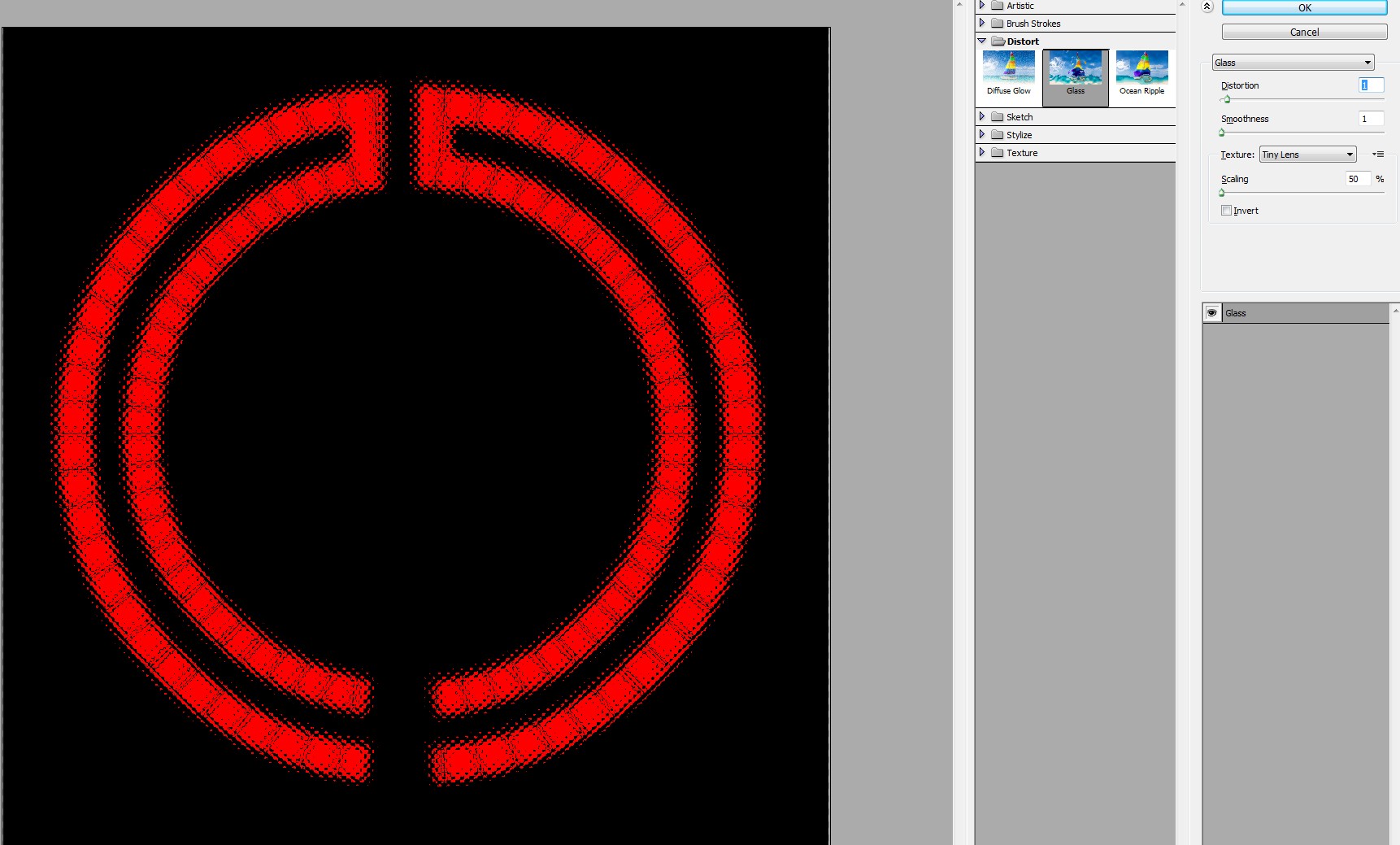 Make the wanted view with transformations (Edit > Transform). There you find rotate, scale and perspective which are used for this result: 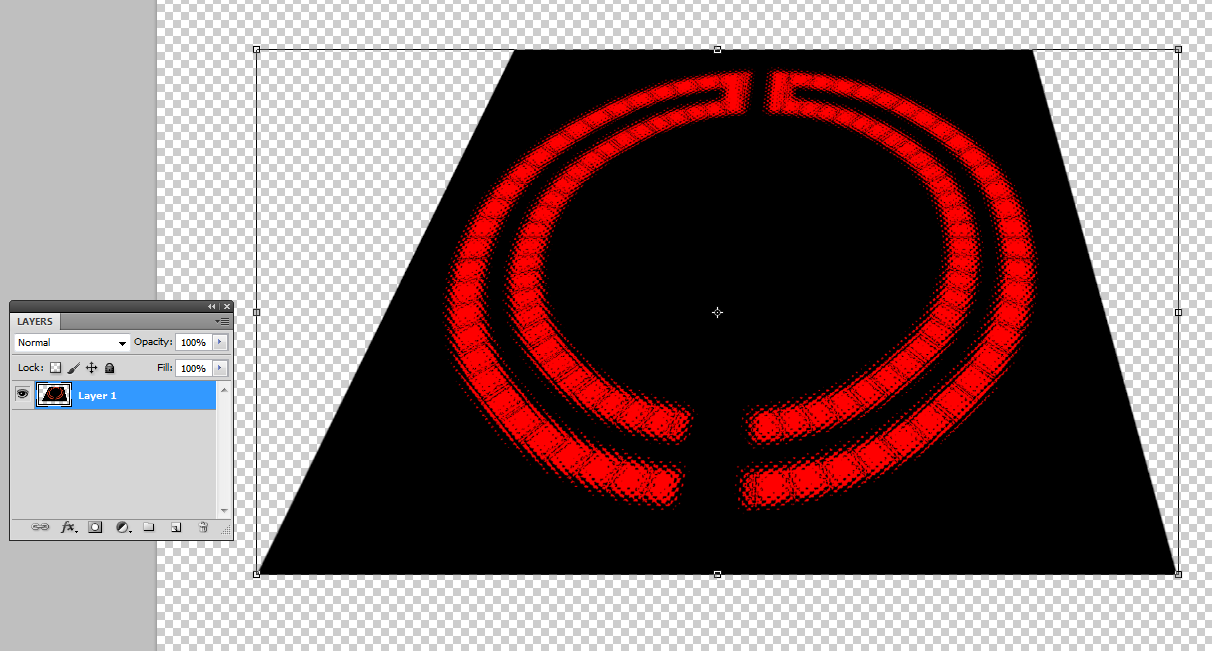 This is a bitmap image. But you wanted a vector. Paste the image back to Illustrator and trace it with a few colors. More than 2 colors is needed because good looking bitmap images have intermediate colors in edges due anti-aliasing. The next tracing result has 4 colors:

It contains about 7800 small paths and there's about 45000 nodes. Here's a snippet which shows those small paths: 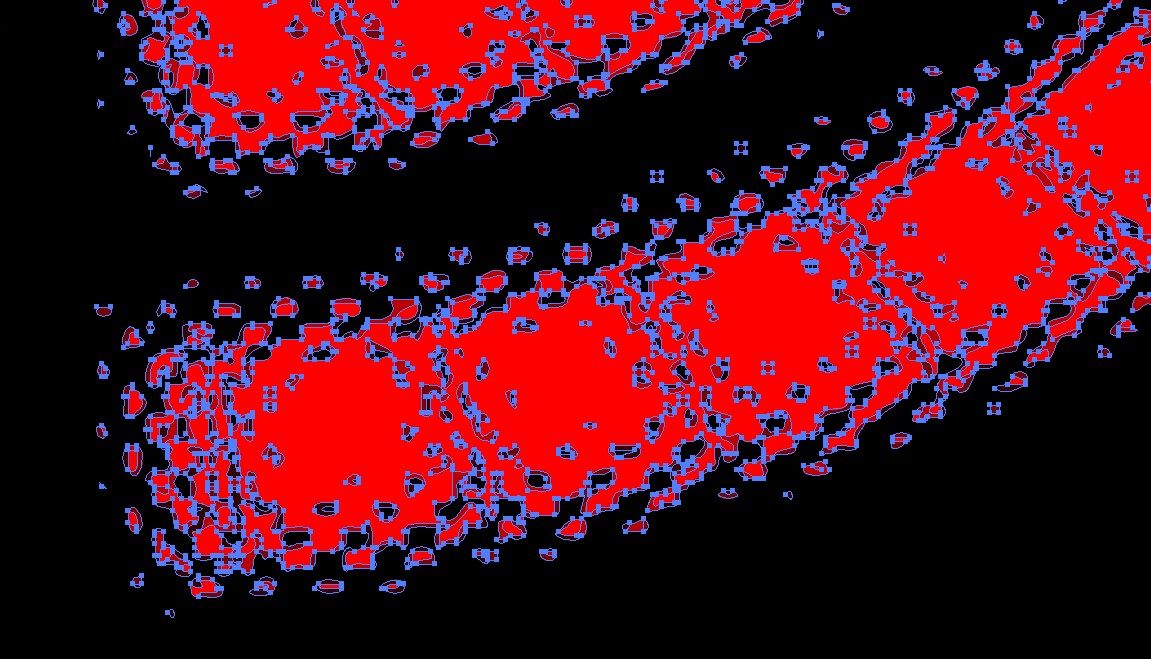 This complexity slows down easily the PC - at least if you have all of the needed rings and a low spec PC. Slow down means that every movement lags harmfully. For that reason the bitmap image version can probably be very useful when designing a scene. If it is say 1000 x 1500 pixels you can have many of them with no noticeable slowing.

Illustrator's Live Trace allows experimenting with tracing settings even after one has already clicked Trace. The effect gets fixed after applying Object > Live Trace > Expand.

NOTE: Pasting to Illustrator from Photoshop inserts white background. If you want to preserve transparency you must save as PSD or PNG and "Place" the image to Illustrator. But fortunately white can be removed in tracing.

Many of us do not shame to mix raster and vector parts in the final image. One doesn't lose the sharpness if he has big enough pixel dimensions. Unfortunately he must know beforehand the biggest needed size.

BTW. Illustrator also has effect Glass but applying it to a vector creates poor result for this purpose. Illustrator has also several Photoshop's effects which actually rasterize the result, but I prefer to use them in Photoshop because there I have available full Photoshop's bitmap image editing power.

About perspective If it happens that you want the perspective, but you do not want the ripple effect you you may want to use Illustrator's tools Perspective Grid and Perspective Selection Tool. Believe: using them is tricky! I do not recommend them, because another much simpler possibility exists. It's Effect > 3D > Rotate: 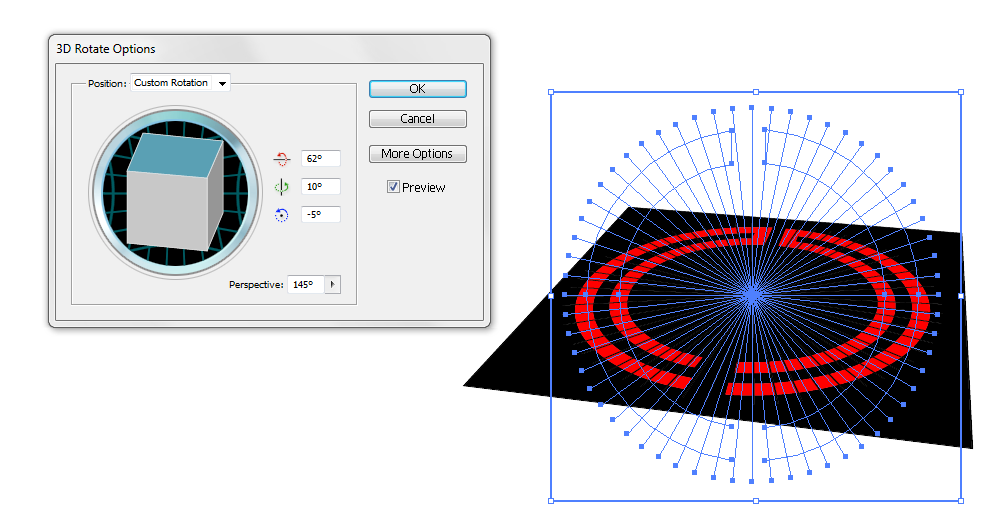 Group the parts before applying 3D effects. It's not only to keep surely all parts along, but the effects would otherwise handle every part separately and create an unpredictable mess.

It's a fairly simple task using concentric circles. You merely cut, join and round... 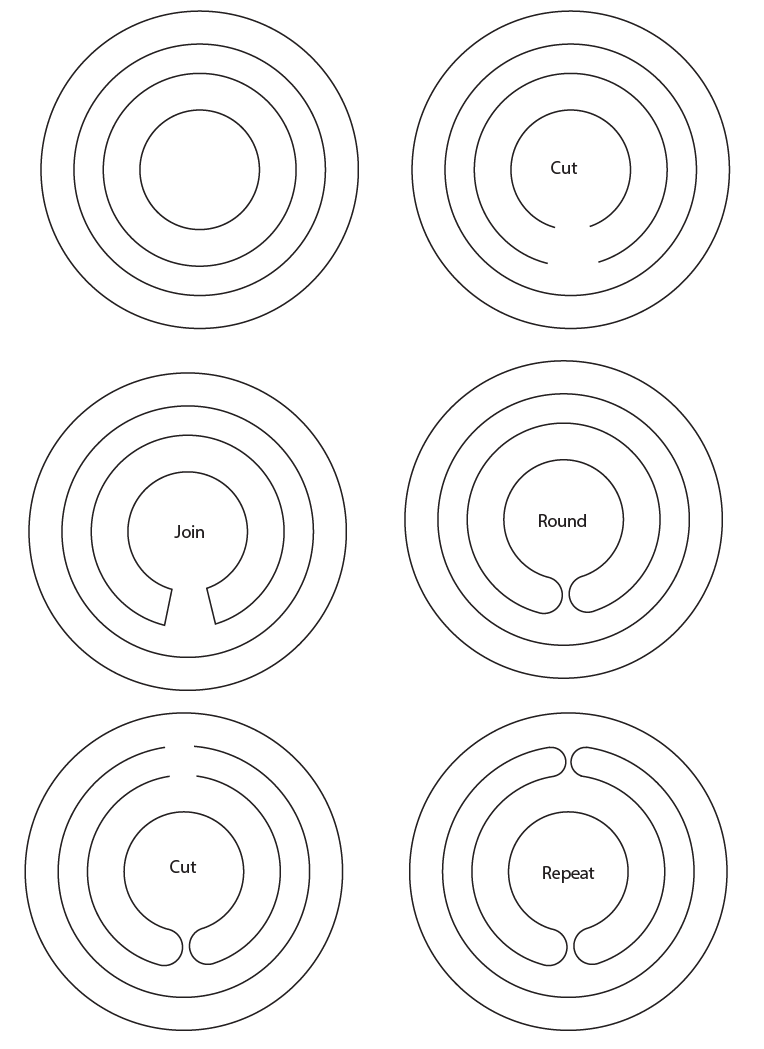 If you are unfamiliar with how to perform any of these steps, please review some basic Illustrator tutorials. There's nothing advanced, or "special" about any of this.

Not the answer you're looking for? Browse other questions tagged adobe-illustrator vector logo shapes or ask your own question.