Translate a control point in FontForge

I'm making my first steps with FontForge editing an existing font. I'd like to use the lower curve of the lower-case T and apply it to the lower-case L to make it more distinguishable from the upper-case I. But it needs to be a little shorter there.

So I'm going to move the right end of that curve to the left, and then compensate the curve by moving their control points back to the right. I know how I can translate the curve points exactly with the transformation dialogue. But it doesn't handle control points at all. I can't even select them alone.

Is there a way to translate bézier curve control points in a controlled way without having to move the mouse manually to exactly the right point, looking at the coordinate numbers and axes? I'll have to do that for several styles so I'd like to automate much of it as far as possible without introducing new errors. 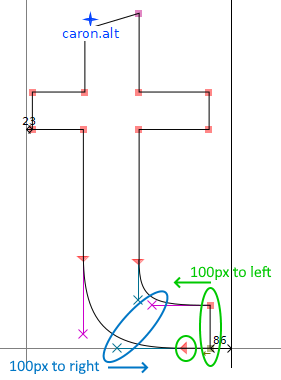 fonts font-forge
Share
Improve this question
asked May 9 at 9:30

In this case it sounds like it would be much easier, and also more precise, to insert two new points and remove the old ones.

Not the answer you're looking for? Browse other questions tagged fonts font-forge or ask your own question.

6
FontForge: how to scale with saving proportions?
1
How to increase size of all glyphs in FontForge?