Is it possible to apply chroma keying, meaning to remove a green (or blue...) screen background, using Gimp? (I happen to use Gimp, but I suppose an answer using Photoshop would be just as good, unless it's referencing a specific Photoshop plugin.)

What I mean is the following:

(Note: I don't know how to do it yet, this mockup was made starting from a stock transparent picture.)

If we look at what needs to be done (or approximated as far as possible, see below) it is the following:

Notice how this procedure is not merely adding an alpha channel; it is changing all colors that lie in the same quadrant as the key color itself. Meaning, if the key color is green, all greenish colors need to be substantially modified, in addition to having a suitable alpha channel added:

The reason I posted this question is that all other questions and answers about this topic miss this crucial point.

I don't know the theoretical background behind chroma keying and I'm guessing it could be quite hairy. For instance, the color that lies exactly between the key color (green in this case) and its exact opposite (which would be magenta in this case) is a perfect gray (by definition of opposite color.) Do we need to turn that shade of gray into semi-transparent magenta? What if it was an actual gray in the original picture? (Which is actually more likely.)

Given all this undefined behaviour in the problem space itself, I'm sure Adobe Premiere and all the other professional video production tools contain very sophisticated chroma keying algorithms.

Can we even approximate the result of those algorithms using basic image manipulation, as found in Gimp? Or is any such endeavor bound to fail?

Alternatively, is there an open source Gimp plugin or separate program that can perform a good quality chroma keying on pictures?

Edit: Wikipedia's article gives an example of a simple function for green screen: rgb(r,g,b) -> rgba(r, min(g,b), b, A*(r+b)-B*g) and goes on to explain that modern algorithms can be much more complicated. Even with the simple function, I understand what it's saying, but I would not know how to perform it using simple selections and channel manipulation.

Obviously your scalp with green background presents well your problematic images - large areas where the green is mixed with hair: 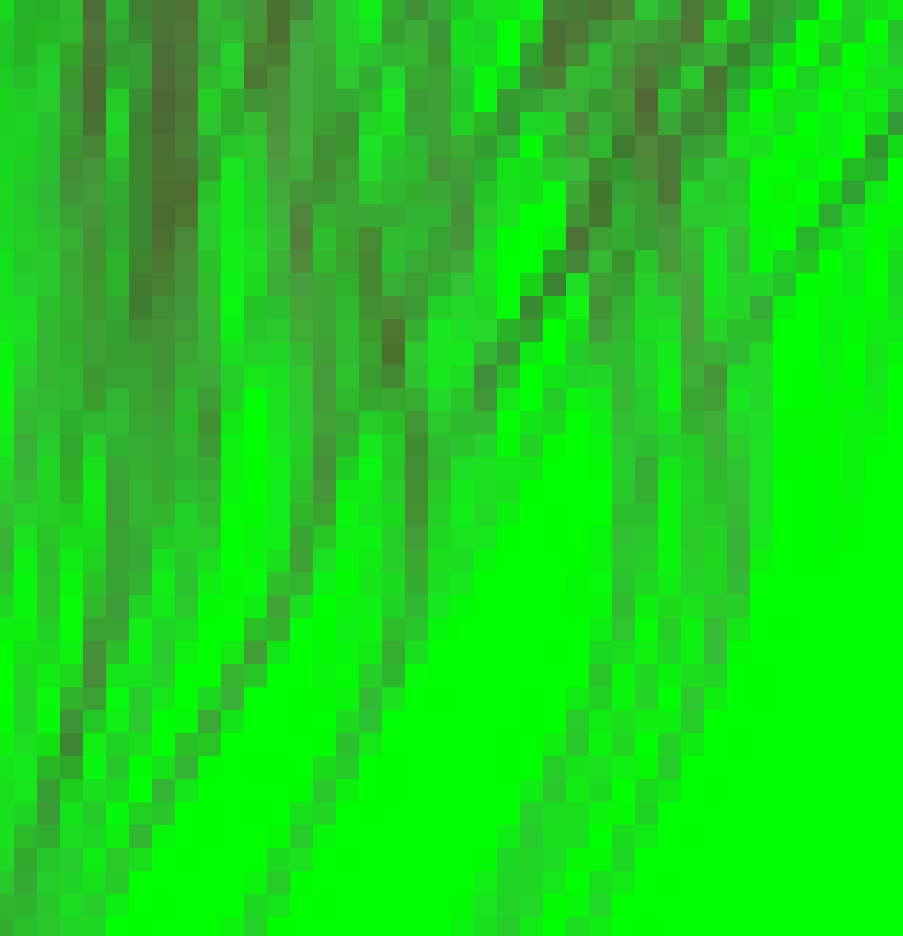 Unfortunately there's no way to calculate exactly the original color of the mixes areas because we do not know is it mixed due the transparency (= more transparent hairs near the edges) or was it originally with no green background colored to more green at the edges than in the middle of the scalp. We must make a guess.

In your image of "what should be done" you guessed that the horizontal color stripes continue with the same hue and saturation, but the transparency increases as the color moves closer to pure green. Actually you didn't guess, you constructed the stripes that way, but a dumb automate with no AI cleverness cannot know how an image is constructed. It sees only the mixing result pixel by pixel with no idea what kind of common creation process could be behind different pixels. You need something much more advanced than GIMP if you want some guessing ability.

To stay in truth your colored stripes would be recovered quite well with the next process because the programmer has thought in same way as you - like the unwanted color is there only due transparency.

The process: The green can be turned to transparency by applying Colors > Color to Alpha.

This is the result with your stripes: 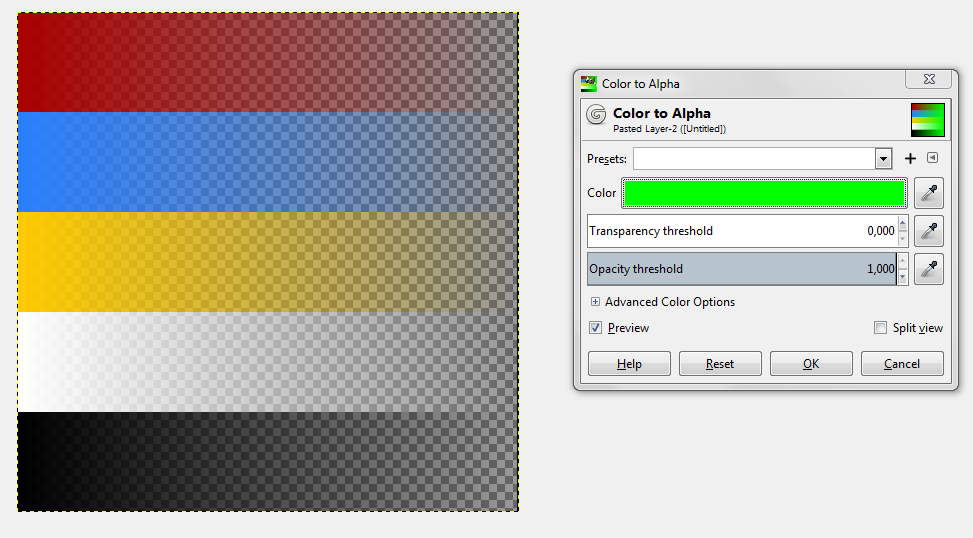 The next one is a more realistic result - the background is mixed with the target in a complex way. It's not pure linear transparency: 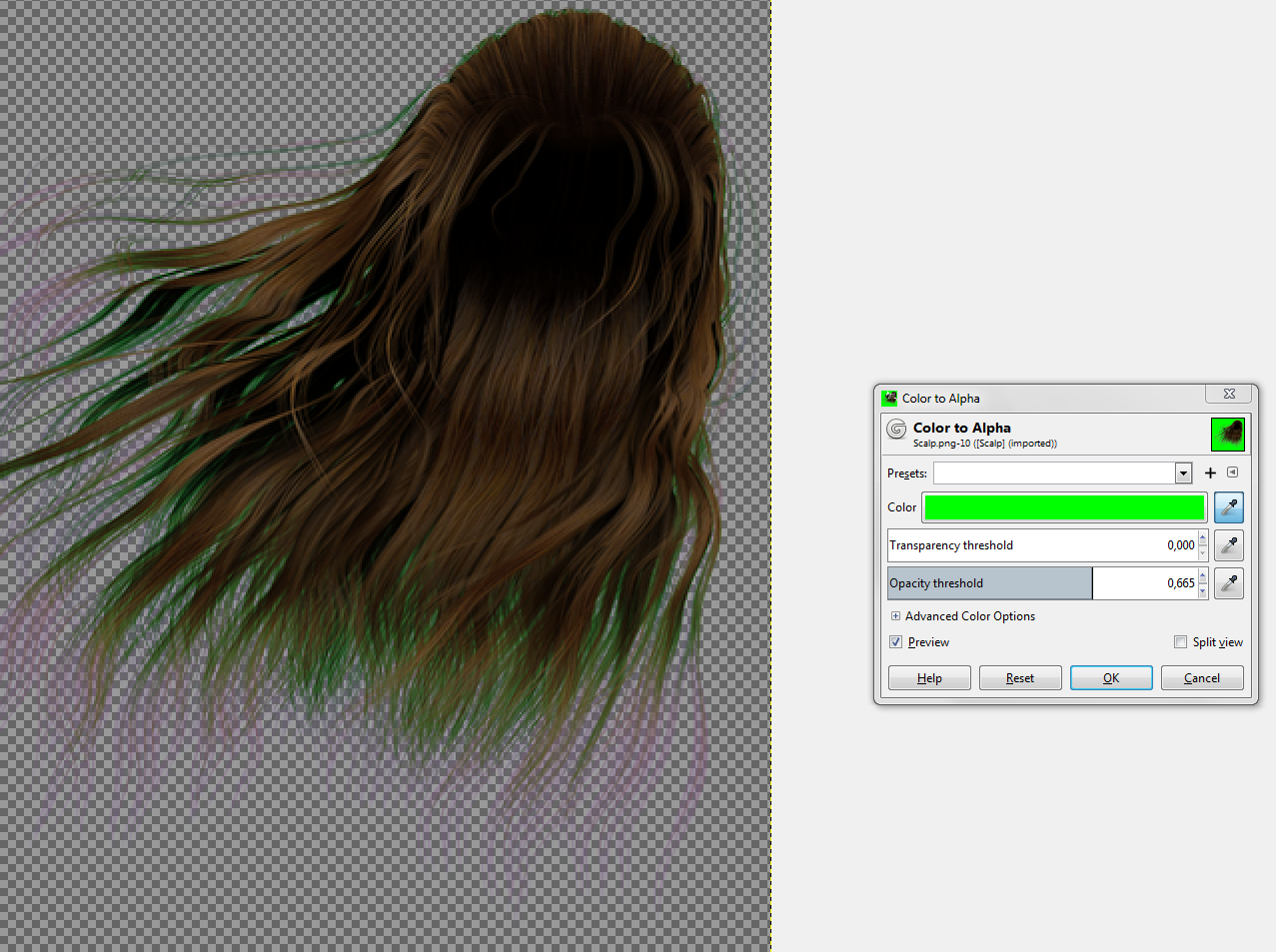 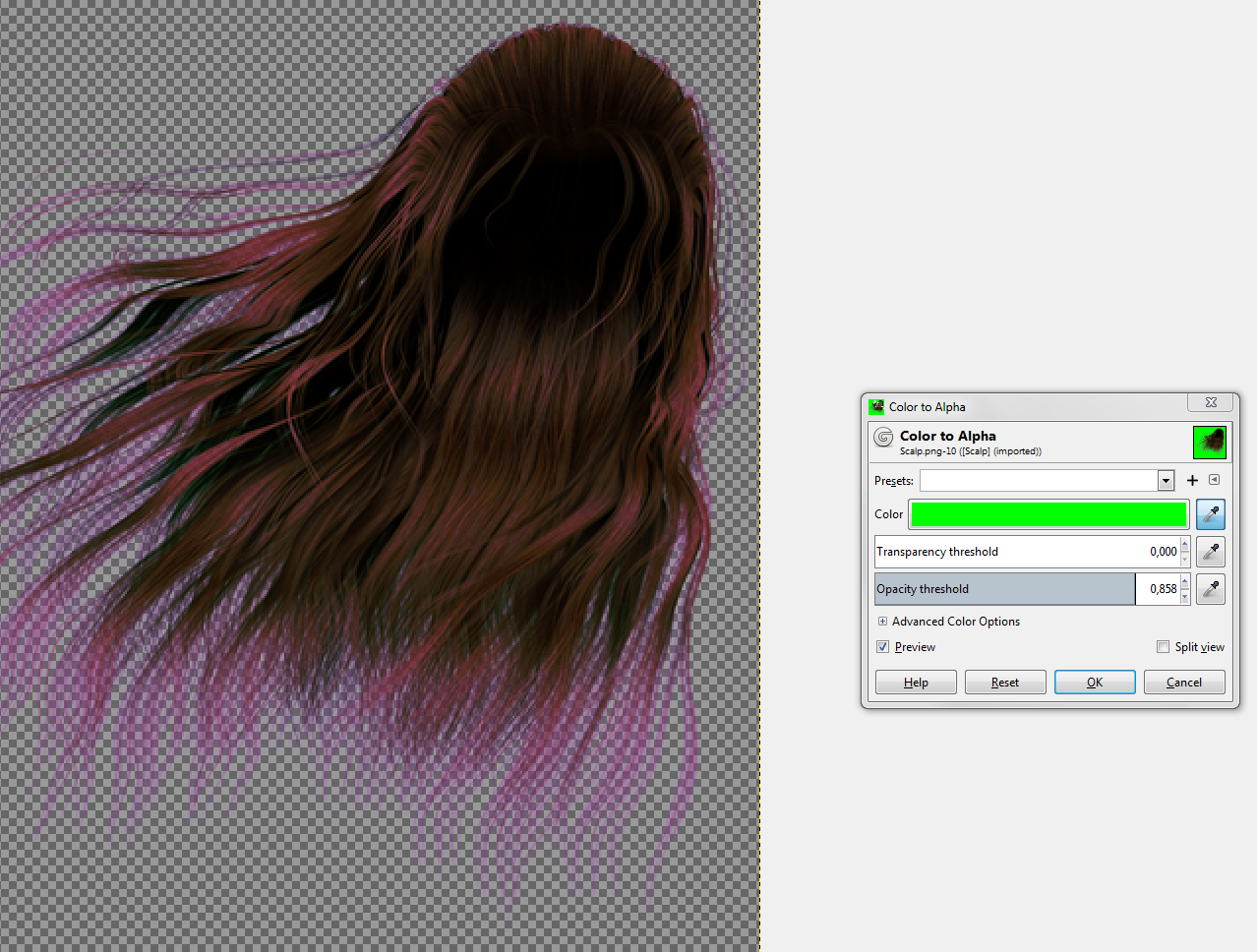 No good tresholds can be found. The other slider would crop the hair. But you can colorize the image. If your brain has some horsepower beyond the usual you can use channel mixer (Colors > Component > Channel Mixer). I skip it.

In your case a single hue recoloring can be acceptable. Pick from the original image a well saturated sample and fill with it a new top layer. Let that layer have blending mode Color LCH. There's other "color" blending modes but Color LCH fits into this case because it it copies Hue and chroma from the sample: 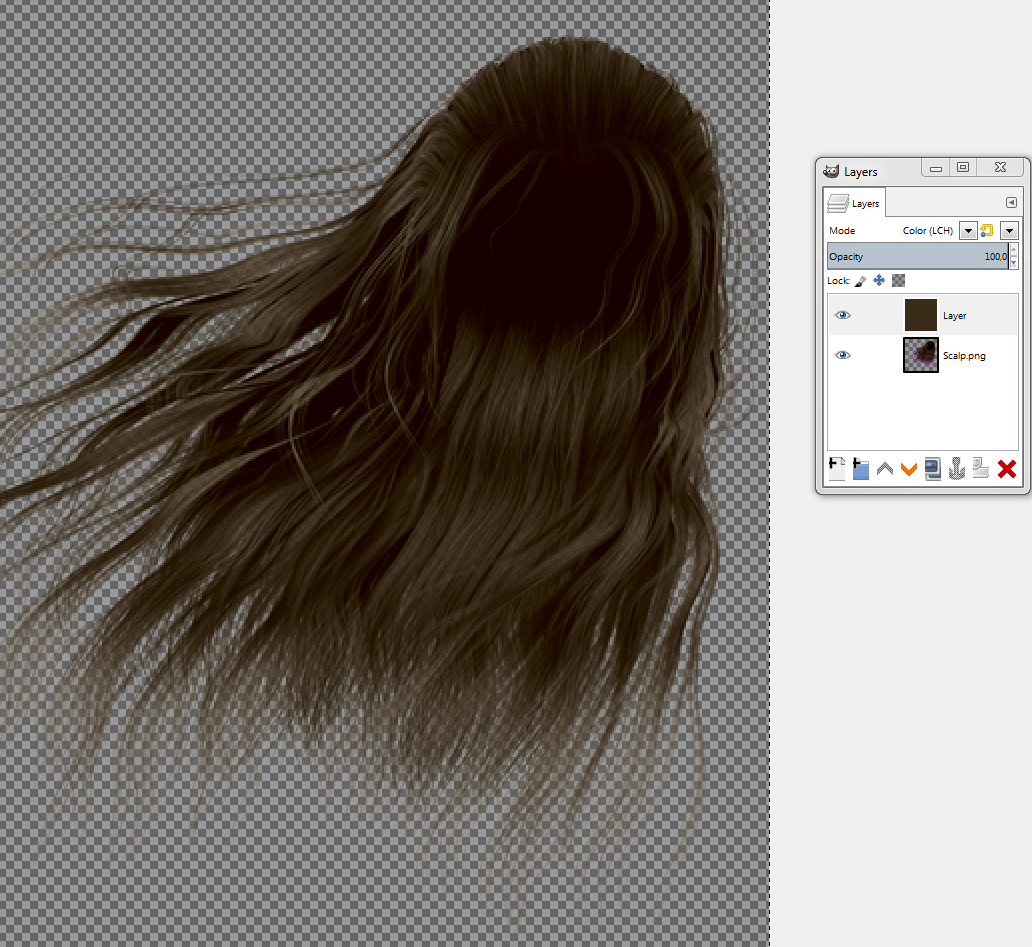 merge the layers if the color is good.

You can desaturate the sparse areas like in the original by making a duplicate, desaturating the bottom copy and erasing with soft brush partially the colored top layer. Or preferably by inserting a layer mask for easy fix in case of errors.

Green screen is not optimal for still photography. It's good for video because it's an excellent quick technique for processing thousands of frames. In still photography, this is not the case. Instead, it's problematic. Green screen typically has issues that are best avoided altogether. In still photography for example, neutral backgrounds are usually preferred to avoid the problem of colour contamination. Software like Photoshop and GIMP have background removal tools which can be used to make a good mask without having to resort to using green screen.

As for solving the problem you seem to have been landed with, you will have to jump through some additional hoops. 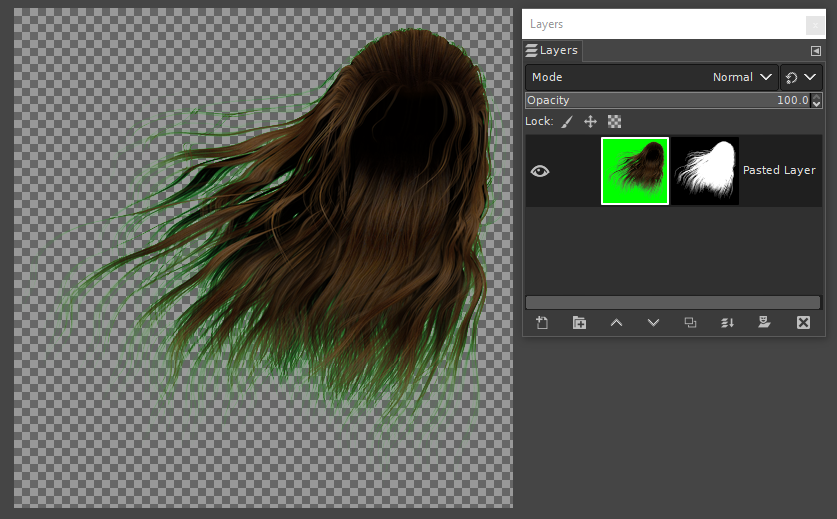 If the image had instead been on a neutral grey background, this problem would not have existed. A simple mask would have been good enough.

To fix it, you would either need to refine the mask further to remove the colour contamination, at the risk of losing detail, or paint over the edges of original image to remove the green. Neither is a great solution, although the last option is probably your best bet.

In this example I sampled a brown colour from the hair, and used the paintbrush with blending mode set to HSL Colour, to paint over the edges. The result isn't bad, but would be more difficult with a more complex image with different colours.

ADD: The questioner has inserted a comment which tells that this answer is useless. His photos have colored zones where the background and target colors are mixed and he is not going to reshoot his images in a way which allows easy background removal.

You can apply Color to Alpha adjustment. BUT: The image should not have an edge zone where the edge material color and the key color are mixed. 1 pixel wide zone fortunately can be shaved off later if the target in the image is big enough in pixels. Wide mixed zones need guessing or knowledge what colors there should be It cannot be calculated without heavy assumptions.

If you are going to shoot your own photos you should have so strong and uniform white foreground light that the key color background doesn't affect the edge colors of the target. Blurry lenses and JPG compression are also bad.

I have suggested here several times for static objects another approach. Take 2 shots with surely non-moving camera (=have pro tripod). Take shot 1 to get a dark silhouette against a bright background and another with bright foreground lights ON. Build a mask from the silhouette.

81
GIMP "color to alpha" is not selectable
6
Forget alpha instead of blending it in Gimp
3
Gimp 2.6.12: modify alpha channel while preserving color
0
Alpha image ontop of non alpha image
1
Gimp, OSX: PNG file seem to be saved without the alpha channel
3
Gimp: Creating Transparent Backgrounds
0
Exporting Image to PNG causes it to be semi-transparent
0
Gimp Question: How to remove multicolored transparency?
0
How do you replace pixel color on all channels including alpha in GIMP?
1
Pasting PNGs into GIMP sometimes converts the alpha channel to black