Why is tonos (sometimes) rendered different from oxia? 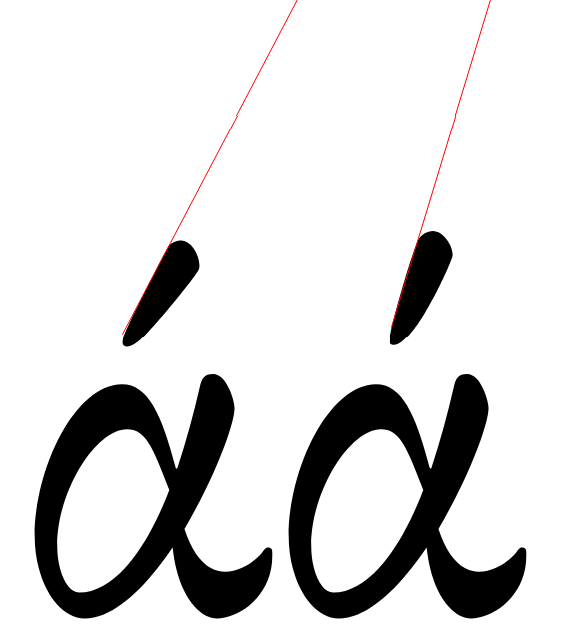 When polytonic Greek was abandoned, they for some reason chose to design the tonos (modern Greek, right in the image) different from the oxia (Ancient Greek, left in the image). In most fonts, there is verily no difference at all, but in some (I would assume those with a longer tradition, such as Garamond), the difference is quite pronounced; as demonstrated in ‘What is the difference between the accent on q and the accent on semicolon?’ (Latin SE), the Ancient Greek accents mirror each other, whilst the tonos has a steeper angle than the ancient oxia.

We have had a conversation in comments and chat on Latin SE, and although modern Greek is off-topic (on Latin SE), unless in relation to Ancient Greek, this question was deemed on-topic due to it concerning the transition from Ancient to Modern Greek. This question was therefore originally posted on Latin SE, and from the conversations in chat, I was recommended to crosspost this to a different SE that might be better qualified to answer my question. Though being on-topic on Latin SE, it is considered unlikely to get an answer, due to the question’s topic being on the side of the expertise found there.

This is pure speculation, only informed by my experience of typeface design:

In polytonic Greek, you want to ensure that an oxia is not confused with other diacritics, in particular the varia (βαρεῖα, grave accent). For this purpose, it is better when the two accents are not very steep. By contrast, in monotonic Greek, there is not much to confuse a tonos with. If you have a diacritic over a vowel, it can only be a tonos or diaeresis and those are pretty easy to distinguish. Thus you have more liberty in designing the accent and can make it steeper if you think that befits the rest of your typeface.

To give an analogue from other languages: If I design a typeface exclusively with the German language¹ in mind, it doesn’t matter if my ö looks like this: ő. Almost every German reader will parse an ő as an ö without further thought, because the language has only one type of diacritic and even loanwords do not feature any other double diacritic. There are indeed some typefaces (in particular when emulating handwriting) whose ö looks rather like an ő. On the other hand, if I design a typeface for the Hungarian language¹, I must ensure that ö and ő are visually different, as this distinction matters for that language.

Another idea was that a steep oxia is somehow more difficult to combine with other diacritics, but it rather seems the other way round.

¹ or more precisely: its standard orthography
Share
Improve this answer
edited May 20 at 8:34
answered May 17 at 14:15

Nick Nicholas's website is a good source for information on Greek typography and Unicode.

Nicholas says that in the monotonic system, which became official in 1982 and was increasingly used in the '70s, the accent initially was often written as a dot or wedge. However, "the Greek government decreed in 1986 that the tonos shall be the acute." Based on this, in modern Unicode there is no canonical distinction between the precomposed letters with tonos and oxia in their names (and both are equivalent to the base letter and a combining acute accent).

I don't know the history of how the distinction came to be found in typefaces such as Garamond, but it sounds like it would date to less than a century ago, and probably is not representative of any very long typographic tradition.

11
What are the different stroke widths (e.g. in a W) in serif fonts called, and why do they have a particular orientation?
8
Why have different font faces for title, text body and graphs in texts?