I have an SVG which contains long thin rectangles where it should have a line: 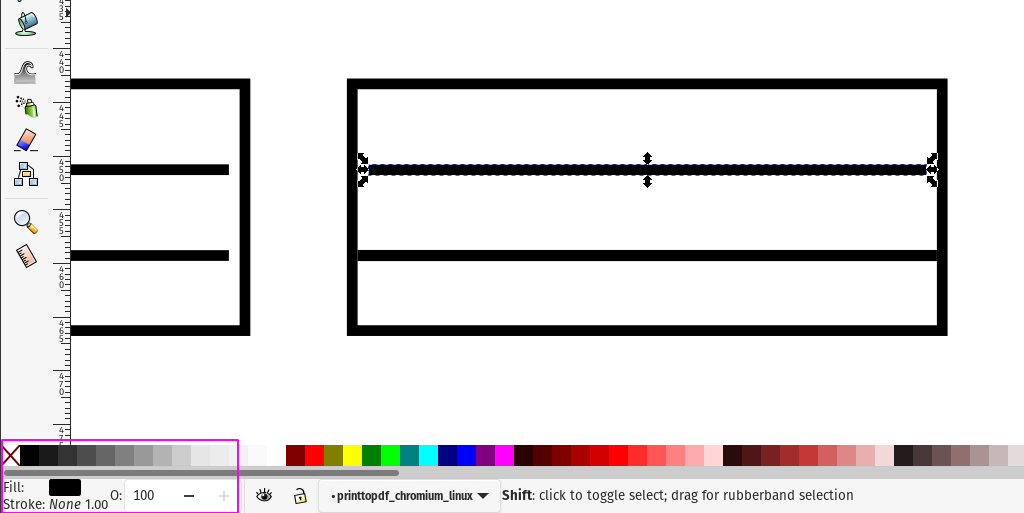 Is there a way to change/convert these somehow? (For example with a script "if aspect ratio > 20, create a path running through the symmetry axis".)

I have an HTML file with many boxes with a border. I want to convert this file into a vector format for laser cutting. This requires the borders to be paths, i.e., without an area.

I've tried many tools evopdf and many other similar conversion sites, tools like webvector, cutycapt, wkhtmltopdf, but none works sufficiently well and often the result looks only vaguely like what the browser renders.

What works best is to have the browser (firefox) render the page and then use "print as pdf". I then import the resulting file into inkscape, which looks the way it did in the browser, and has the correct sizes as were set in the html file (they were set in mm). The only issue is the one described above.

I tried on both linux and windows.

If there is another pdf printer that does correctly create paths, that would also solve my issue.

inkscape file-conversion
Share
Improve this question
asked May 20 '21 at 19:16

Browse other questions tagged inkscape file-conversion or ask your own question.

13
Can I convert SVG text to path but reuse glyphs?
4
Problem converting pdf to eps - grey hue (using Pixelmator and Inkscape)
0
Only Inkscape (and GitHub) render SVG correctly
1
Looking for recommendations for good gcode generators for laser plotters
2
SVG looks different in Inkscape than elsewhere
1
Inkscape : Export as pdf results in blank files
0
How to make sure the clipping in a .svg created with Inkscape are imported well in Illustrator
0
SVG/PDF printing not properly
1
Simplifying documents with many clipped paths
1
InkScape to convert multiple paths into one single path