Inkscape. Can I copy the current documents SVG code without exporting?

So I work in the cloud using my browser. Exporting my SVG files I make in Inkscape and then either uploading them or copying the code becomes a bit repetative.

is there a button or shortcut that will copy the current documents SVG code to the clipboard?

Inkscape has a built-in XML Editor, but you can't copy and paste the bare SVG code with it.

If you want direct access to the SVG code, you could simply keep the SVG file open in a text editor such as Notepad++.

Then when you update/overwrite the SVG by saving from Inkscape, just go back to Notepad++ and it will tell you that the file has been modified, and ask if you want to reload it. Click Yes. Then you can then copy and paste it from Notepatd++ 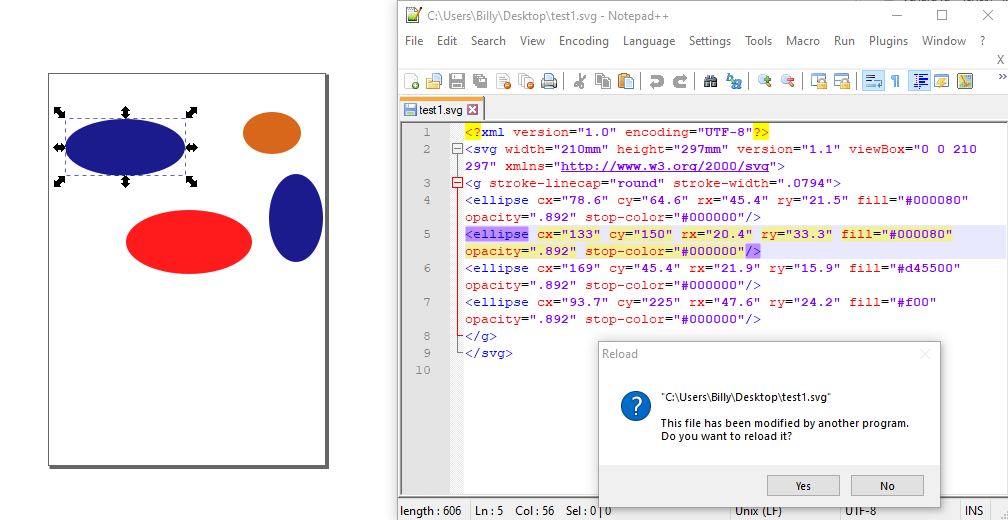 If you don't necessarily need to save an Optimised SVG, but simply want the Inkscape SVG, then Ctrl+S will save the document with all the Inkscape-specific XML included.

There also used to be an Extension called Object-to-and-from-string. Not sure it will still work for recent versions of Inkscape 1.0 and later, since it's quite old. I haven't tested it.

0
Single path overlapping? I shoelace design
11
Is there anything that can read, import or convert CMYK SVG?
1
How to batch convert/scale PNG files to SVG?
1
Is there an automated way to remove cropped regions of embedded images in order to optimize the size of an Inkscape SVG file?
0
Text issues when exporting SVG from Illustrator to Inkscape
0
Only Inkscape (and GitHub) render SVG correctly
0
Inkscape SVG to OTF / TTF